Shadow of the Thin Man

Everybody's favorite married detectives, Nick and Nora Charles, return in the surprisingly good Shadow of the Thin Man, the fourth installment of the popular comedy-mystery series. With customary verve, William Powell and Myrna Loy play the wisecracking, cocktail-swigging sleuths who this time must infiltrate a sports gambling syndicate to find the killer du jour. A fine supporting cast, a few thrills, and a sparkling script highlight this entertaining mystery that's been given a nice remastering by Warner Archive. Recommended.

After a bit of a stumble with Another Thin Man, MGM's classic mystery-comedy series solidly rebounds with Shadow of the Thin Man, the fourth installment of the lucrative franchise featuring those irresistible married martini mavens - and crackerjack detectives - Nick and Nora Charles. The lovable, crime-solving couple, portrayed to perfection by William Powell and Myrna Loy, trade barbs, dodge danger, and nurture Nick Jr. (Dickie Hall) in this fast-paced, terrifically entertaining film that deftly mixes high-spirited hijinks with an involving whodunit populated by plenty of unusual suspects.

The mysterious death of a jockey in the locker room of a Bay Area racetrack concerns not only police lieutenant Abrams (Sam Levene), but also Major Jason Sculley (Henry O'Neill), who heads up a commission investigating sports gambling, and gutsy journalist Paul Clarke (Barry Nelson), who hopes to expose the racket. It seems the dead jockey had thrown a race for cash and was slated to testify at a hearing before a bullet killed him in the shower. Sculley and Clarke suspect foul play and ask Nick to nose around. He initially demurs, but when Clarke's colleague Whitey Barrow (Alan Baxter), who's been receiving payoffs from the syndicate in return for positive press, gets gunned down after he and Clarke scuffle in the office of a crooked wrestling promoter, Nick springs into action.

Once he and his loyal dog Asta sniff out a few clues, Nick begins interviewing suspects, but cracking this complex case will require all of his considerable deductive powers...and, of course, copious amounts of alcohol. 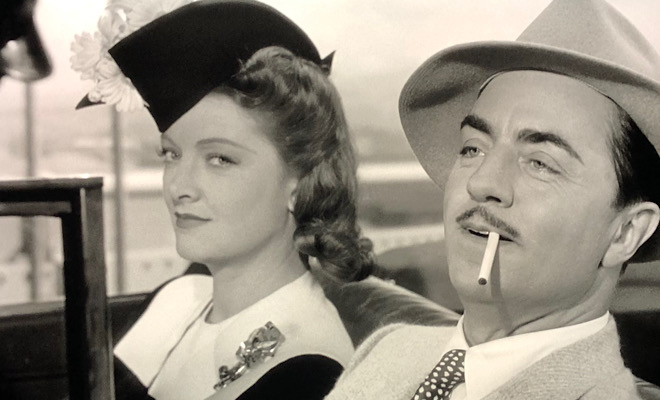 Shadow of the Thin Man marked the first Thin Man film produced without any contribution from author Dashiell Hammett, who wrote the original novel. It also, sadly, would be the last Thin Man film directed by W.S. Van Dyke II, who helmed the series' three previous chapters. (Van Dyke would commit suicide after receiving a terminal cancer diagnosis just a couple of years later.) Hammett's input isn't really missed; screenwriters Irving Brecher (who would receive an Oscar nomination three years later for Meet Me in St. Louis) and Harry Kurnitz (who would nab Oscar nods for What Next, Corporal Hargrove? in 1946 and Witness for the Prosecution in 1957) construct a tightly-knit mystery that keeps us guessing and holds together upon reflection. They also make sure the laughs flow as freely as the cocktails.

Three comic set-pieces spice up the picture - a wild wrestling match, Nick's dizzying ride on a department store merry-go-round, and a slapstick restaurant brawl that's reminiscent of a Keystone Kops sequence. All of them deliver the goods, thanks to Van Dyke's energetic direction and priceless sense of the absurd. A master of pacing whose shoots flew by as fast as his films (his nickname was "One-Take Woody"), Van Dyke maintains momentum and juggles humor and thrills without skipping a beat. He also showcases an array of fine supporting actors, all of whom contribute to the movie's success.

The wonderfully manic Levene, who enlivened After the Thin Man and was sorely missed in Another Thin Man, returns as the forever flummoxed Lieutenant Abrams, who's always one step behind Nick in his investigation. Levene's lively line readings and hilarious facial expressions help him steal almost every scene in which he appears...a tough thing to do when you're sharing the screen with Powell and Loy. Louise Beavers also perks up the proceedings, supplying a soupçon of panache as Nick and Nora's frequently nonplussed maid, while two notable newcomers - 24-year-old Barry Nelson, appearing in just his second film, and 20-year-old Donna Reed, appearing in her third - make significant impressions in featured parts. 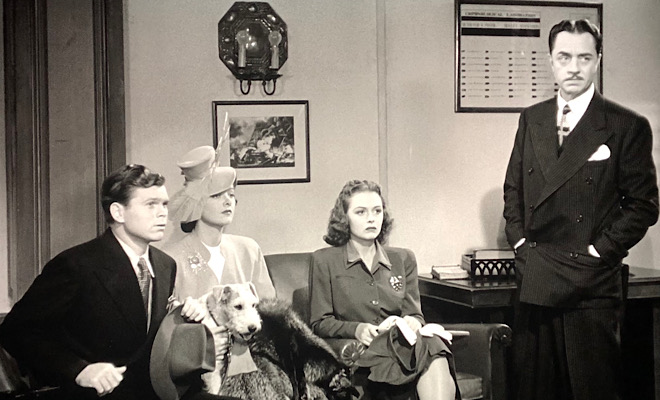 Another noteworthy - and fascinating - cast member is Stella Adler, who soon would become one of the most famous and influential acting teachers in theatrical history. A disciple of Stanislavski, Adler would open her own conservatory in 1949, but began coaching a young unknown actor named Marlon Brando several years before. Adler is credited with developing, molding, and refining Brando's distinctive talent over the course of his career, but she also personally taught such luminaries as Robert De Niro, Harvey Keitel, Steve McQueen, Warren Beatty, and many other esteemed performers. Her own Hollywood career was brief - she only made three movies - and though her role in Shadow of the Thin Man hardly shows off the breadth of her abilities, Adler transforms the stereotypical part of a sassy blonde with a shady past into something memorable.

One final bit of trivia that didn't catch my eye until I did a deep dive into the film's cast list on IMDb... Shadow of the Thin Man marks the feature film "debut" of one of the silver screen's most alluring stars, Ava Gardner. In a true blink-and-you'll-miss-her walk-on (I blinked and I missed her), Gardner walks behind Levene while he's chatting with Powell and Loy in their car at the racetrack. She doesn't utter a word and is only on screen for a couple of seconds, but it's the start of what would become a legendary career. Below is a screengrab of the fateful moment, followed by the clip of appearance (don't blink or you'll miss her). 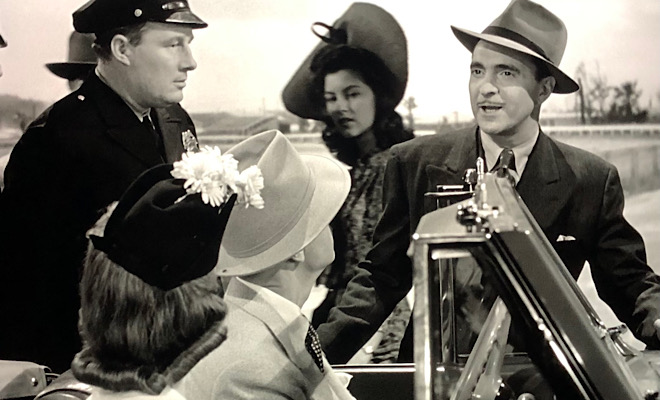 Of course, the Thin Man movies are all about Powell and Loy, and the iconic duo scores once again here. By this time, the two probably could have played Nick and Nora Charles in their sleep, but to their credit, they don't sleepwalk through this effervescent film. Both actors still look like they're having a ball, and their infectious enthusiasm and priceless chemistry provide the fuel to keep the franchise's engine humming. Powell especially flexes his comic muscle (watching him get bullied by the kids on a merry-go-round before succumbing to vertigo is one of the film's highlights), but Loy keeps pace, delivering a few verbal zingers and showing off her gift for physical comedy. One of her best moments occurs when she wraps herself around Powell like a pretzel while watching the wrestling match, almost strangling him as she unconsciously imitates the moves of the competitors in the ring.

A mere two weeks after MGM released Shadow of the Thin Man, the Japanese attacked Pearl Harbor and the world instantly changed. Loy would devote her time to war work and wouldn't make another movie for three years. Though the Thin Man franchise would survive (Loy's return vehicle would be The Thin Man Goes Home), shifting attitudes made the movies feel more frivolous, and only two more would be produced. Shadow of the Thin Man may not stand as the best episode in the series, but it's a solid entry that holds up well and shows off all involved to their best advantage.

Vital Disc Stats: The Blu-ray
Shadow of the Thin Man arrives on Blu-ray packaged in a standard case. Video codec is 1080p/AVC MPEG-4 and audio is DTS-HD Master Audio 2.0 mono. Once the disc is inserted into the player, the static menu with music immediately pops up; no previews or promos precede it.

Once again, Warner Archive spruces up a time-honored classic, and the 4K remastering puts a lovely sheen on this 1080p/AVC MPEG-4 transfer. Excellent clarity, contrast, and grayscale produce a vibrant, contoured picture that bursts with fine details and sports a fair amount of depth. Photographed by the esteemed William Daniels (Garbo's cinematographer of choice), Shadow of the Thin Man looks slick and elegant, thanks to the beautifully resolved grain that preserves the feel of celluloid. Costume fabrics fare especially well (you can almost feel the wooly weaves of Powell's various suits), the tightly knit patterns remain rock solid throughout, and sharp close-ups showcase the movie-star glamor of both Powell and Loy. Rich blacks and bright, stable whites anchor the image, and strong shadow delineation keeps crush at bay. A slight bit of jitter afflicts one scene involving Loy and a few errant speckles crop up here and there (most notably during the opening credits), but those are the only issues plaguing this otherwise silky, very satisfying rendering.

The DTS-HD Master Audio 2.0 mono track sounds a little worse for wear, but it's still crisp and clear, with the all-important dialogue always receiving proper prioritization. Sonic accents like gunfire, sirens, and the bloodthirsty roars of the wrestling crowd make potent statements, while a wide dynamic scale handles all the highs and lows of David Snell's music score without any distortion. All the wisecracks and bantering are easy to comprehend, and though a bit of faint surface noise crops up from time to time during quieter scenes, it's never prominent enough to distract from the action on screen.

Though Shadow of the Thin Man can't beat the first two Thin Man films, the fourth installment of the legendary series hits all the right notes. This breezy whodunit laced with laughs and liquor provides William Powell and Myrna Loy with plenty of chances to shine and will keep you guessing until the big reveal. A lovely remastered transfer, solid audio, and a few vintage supplements distinguish Warner Archive's Blu-ray presentation of this rollicking comedy-mystery. Recommended.