One of the toughest and most devastating prison movies ever made, Brute Force still packs a potent punch. Director Jules Dassin's stinging indictment of the prison system stands as one of the finest entries in a cluttered genre and features a blistering breakout performance from a young Burt Lancaster. An impressive 4K restoration revitalizes this long-neglected movie and a few absorbing supplements bolster the appeal of this essential Criterion release. Highly Recommended.

After dutifully toiling for several unfulfilling years at MGM, director Jules Dassin busted out of the studio and went to work for producer Mark Hellinger at Universal. A free man at last, Dassin celebrated his hard-earned liberation by helming, quite fittingly, a prison-break drama. Brute Force, based on a real-life incident at Alcatraz, would be a stark departure from the frothy drivel Dassin directed for Louis B. Mayer. This appropriately brutal, fatalistic film noir about the existential struggles of a group of hopeless convicts who plot a daring escape shocked audiences with its raw presentation, graphic depictions of violence, and bleak viewpoint. It also earned Dassin a new reputation as a filmmaker of immense style and artistry.

A crackling story, literate script, taut pacing, disturbing imagery, and excellent performances by a fine ensemble cast all define Brute Force, but this absorbing drama also tackles important themes. One of several post-World War II movies to examine potent social issues, Dassin's film shines a light on the deplorable prison conditions of the day, the horrific abuse inmates were forced to endure at the hands of barbarous guards, and the tangled bureaucracy that consistently thwarts any meaningful reform. There's conflict among the prisoners and conflict among administrative officials, and both factions are damaged by and mired in a dysfunctional system from which there seems to be no escape. 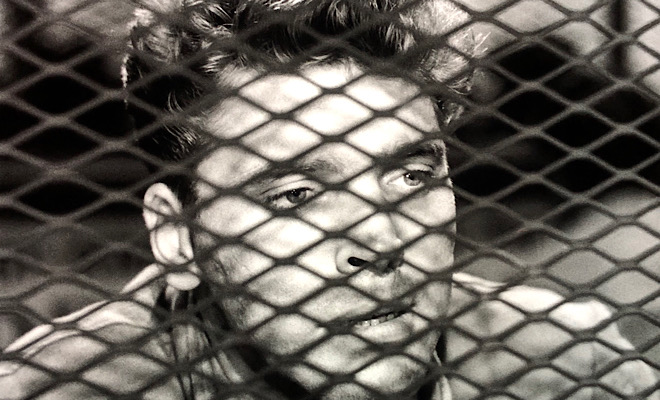 The inmates of Westgate Penitentiary Cell R17 are one core group of Brute Force characters. Oppressed, browbeaten, and disheartened, they can no longer abide the overcrowded and inhumane environment in which they must serve their time or tolerate the maniacal manipulations and gross misconduct of Capt. Munsey (Hume Cronyn), an ambitious, sadistic, Hitleresque figure who hopes to unseat the current ineffectual warden (Roman Bohnen) and rule the prison with an iron, fascist fist. Both the warden and alcoholic prison doctor (Art Smith) advocate for rehabilitation, but Munsey and state officials champion discipline and prefer to treat the inmates like wild animals instead of human beings.

Tensions soon reach the breaking point, and embittered prisoner Joe Collins (Burt Lancaster) lights the fuse that will eventually combust the tinderbox atmosphere. After a bogus stint in solitary, Joe returns to his cell mates and vows to break out of the maximum security facility. His plan faces impossible odds, but for Joe and his brethren, dying in pursuit of freedom beats succumbing to Munsey's brute force.

A heavy dose of fatalism pervades Brute Force, but Dassin and screenwriter Richard Brooks temper its downbeat tone and graphic scenes of violence by humanizing the inmates through a series of brief yet illuminating flashbacks. Through these varied vignettes, we learn about the men's lives before their respective convictions, and how their attraction to and love for a special woman led to their incarcerations. Some made bad choices, others went up the river for noble actions, but all have souls...and over the course of the movie the prisoners expose them and earn our empathy.

Munsey and the inmates don't pull any punches and neither does Dassin. His brash, naturalistic style immerses us in the stifling, filthy, and claustrophobic atmosphere of prison life. Noir accents and hints of homoeroticism abound, and a feeling of entrapment and impending doom swirl about heroes and villains alike. Parallels between Munsey and the recently quashed Nazi regime and post-war spread of authoritarianism are impossible to ignore, and more than 70 years later Dassin's powerful imagery still transmits a disturbing message. Some might classify the electric, bloody climax as over the top, but it stands as a virtuoso display of vision and craftsmanship.

Brute Force would be a breakout film not only for Dassin, but also Brooks and Lancaster. Brooks had previously written a trio of insignificant scripts, but Brute Force would showcase both his flair for dialogue and ability to interweave character, plot, and theme. Once the film was released, he almost instantly vaulted to the top of the screenwriting heap and would soon become one of Hollywood's most respected writer-directors, earning eight Oscar nominations (three for directing and five for writing) over the course of his 40-year career. (Brooks finally took home the prize in 1964 for his Elmer Gantry script.) 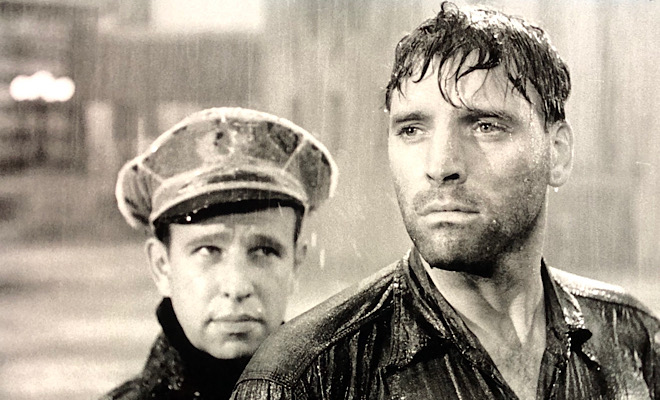 Lancaster, in only his second film, electrifies the screen, filing an intense, physical, yet nuanced portrayal that's a solid follow-up to his bold debut in The Killers the year before. Like a caged animal, he skulks around the prison, biding his time until he can bust loose and release his pent-up fury. He shows an equally effective softer side during his flashback, and his climactic battle royale with Cronyn calls to mind the showdown between Bruce Willis and Alan Rickman four decades later in Die Hard.

Cronyn makes a truly frightening villain, because his character so thoroughly relishes the physical pain and mental suffering he inflicts. With his close-cropped hair, piercing eyes, and vicious snarl, the diminuitive actor looms over his prey, and the fascist imagery that often surrounds him drives home his obsession with power, domination, and violence. In key supporting parts, Charles Bickford, Howard Duff (in his film debut), Sam Levene, Jeff Corey, John Hoyt, Jack Overman, and Whit Bissell all shine, and as the women who love them, Yvonne De Carlo, Ann Blyth (who's so sweet and sympathetic as Lancaster's invalid girlfriend it's almost impossible to envision her as the venomous Veda in Mildred Pierce), Ella Raines, and Anita Colby (in her screen swansong) supply some much-needed feminine charm and a dash of tenderness to this hard-boiled, macho drama.

Brute Force lives up to its title, but Dassin's film doesn't exploit its subject. On the contrary, it delves deep and makes many incisive points about a flawed system that's still badly in need of reform today. It also set the standard for the modern prison film and remains an affecting portrait of disillusionment, despair, and the strength, resilience, stubborn resolve, and innate desire for freedom that define the human spirit. 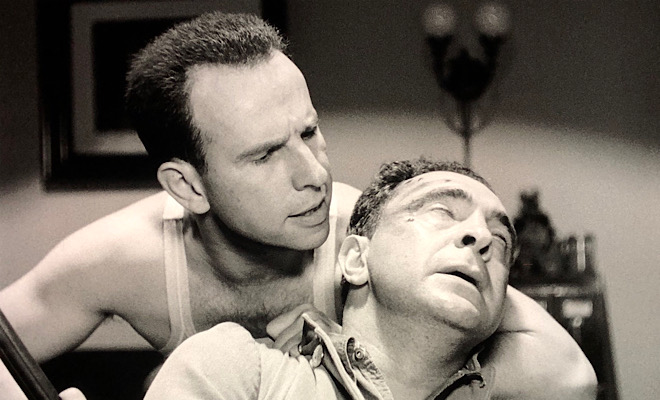 Brute Force arrives on Blu-ray packaged in a standard Criterion case. A 40-page booklet featuring an essay by film writer Michael Atkinson, a vintage magazine profile of Mark Hellinger by Saturday Evening Post writer Pete Martin, archival correspondence between Hellinger and censorship honcho Joseph Breen, a cast and crew listing, transfer notes, and several black-and-white scene and production photos is tucked inside the front cover. Video codec is 1080p/AVC MPEG-4 and audio is LPCM mono. Once the disc is inserted into the player, the static menu with music immediately pops up; no previews or promos precede it.

Just like The Naked City, also released in September 2020 by Criterion, Brute Force underwent an extensive and meticulous 4K restoration prior to its Blu-ray release. According to the liner notes and an on-screen restoration explanation that precedes the film, the original camera negative of Brute Force "is presumed lost," and a rash of distributor changes and careless handling of various prints over the years accelerated the movie's general decay. In 2016, the current rights owner ordered a "complete and extensive restoration for preservation based on the remaining elements." For this restoration "a total of 13 elements were selected and used, among them a nitrate fine grain and a safety duplicate negative recently discovered at the British Film Institute." The frame-by-frame 4K restoration took two years to complete, and though the results don't quite rival The Naked City, the presentation is still quite impressive.

Grain is evident, but not only does it lend the image a lovely film-like feel, it also enhances the rough prison atmosphere and William Daniels' beautifully gritty cinematography. Clarity and contrast are quite good, and though fluctuations do occur due to the use of multiple source prints, the picture remains remarkably consistent. Details like driving rain and the machinery in the prison workshop are crisp, and shots through the cell bars and metal screens are well defined and stable. 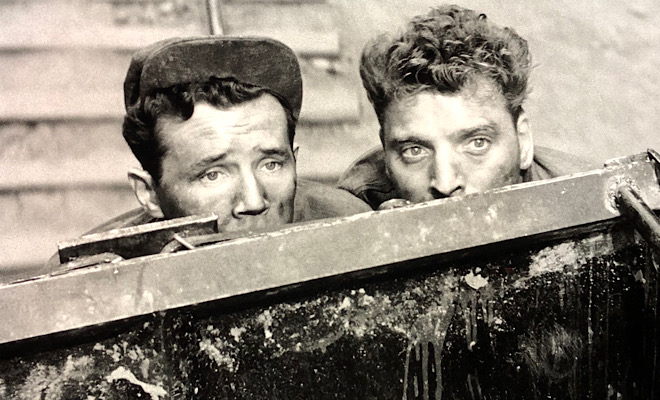 Prison life could be described as monochromatic, and Brute Force reflects that atmosphere with rich black levels, harsh yet controlled whites, and plenty of varied, drab grays. Shadows are prominent and frequently employed, and their delineation is quite good, while sharp close-ups juxtapose the men's sweaty, stubbly, careworn faces with the smooth complexions of the women they love. (The tight shots of Ann Blyth are especially arresting.) Some nicks and marks occasionally crop up, but considering the shoddy treatment Brute Force has received over the past 70 years, a few lingering blemishes are forgivable. This terrific presentation restores the film to as close to its original glory as possible, and that should warm the heart of anyone who appreciates the art of cinema.

According to the liner notes, "the soundtrack was mastered from the 35 mm composite fine-grain optical track print," and the resulting LPCM mono presentation provides vibrant, well-modulated audio. The cacophony of the prison work area, featuring clanking machines, ceaseless hammering, and grinding gears, assaults the ears, while sonic accents like sirens, whistles, ringing phones, gunshots, explosions, truck engines, and fisticuffs are crisp and distinct. Excellent fidelity and a wide dynamic scale showcase Miklós Rósza's robust, dramatic score without a hint of distortion, and all the dialogue, even when faintly whispered, is clear and easy to comprehend. Silences are wonderfully clean, and no age-related hiss, pops, or crackle mar this lively track.

A few choice supplements round out this Criterion release.

Brute Force packs a powerful punch. As an exposé of deplorable prison conditions, sadistic guards, and dysfunctional penal bureaucracy, it paints a bleak portrait of a broken system, but it also humanizes the inmates and tries to make us understand the pressures and frailties that lead men into lives of crime. First and foremost, though, it's just a damn good film noir. Taut, exciting, artistic, and devastating, director Jules Dassin's movie flexes plenty of muscle and features a breakout performance by a brooding, magnetic Burt Lancaster. A terrific 4K restoration brings this abused motion picture back from the dead, while a few absorbing supplements provide essential context and perspective. This is another noteworthy Criterion release that demands a spot in every cinephile's collection. Highly Recommended.