After the Thin Man

Andy Hardy, Dr. Kildare, and that spunky showgirl Maisie each headlined their own series of MGM films during Hollywood's Golden Age, but without question The Thin Man reigned supreme as the studio's flagship franchise. The original 1934 comedy-mystery based on Dashiell Hammett's popular novel spawned five sequels over 13 years, all of them starring William Powell and Myrna Loy as husband-and-wife detectives Nick and Nora Charles, who solve an array of mysteries while trading wisecracks and kisses...and consuming copious amounts of alcohol. None of the follow-ups eclipse the original, but the first stands as arguably the best of the bunch.

After the Thin Man was released two years after The Thin Man cemented Powell and Loy as an iconic screen team. (The duo would make a whopping 14 pictures together, and their comfortable, intimate chemistry led many film fans to believe they were married in real life.) Unlike most sequels, this one picks up right where the original left off. As The Thin Man ends, Nick and Nora are traveling on a transcontinental train headed from New York City to California, and as After the Thin Man begins, that same train is just about reach its terminus in San Francisco. It's New Year's Eve, but the exhausted couple intends to forego any revelry in favor of a quiet night of relaxation in their cushy Nob Hill home. 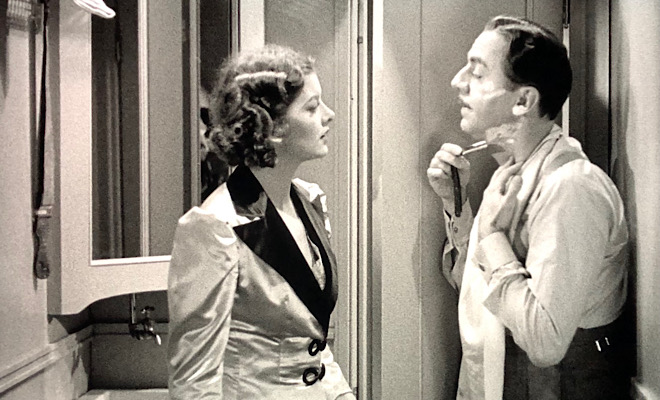 Those cozy plans, however, go crazily awry after Nora receives a frantic phone call from her cousin Selma (Elissa Landi), who's beside herself with worry over the disappearance of her no-good husband Robert (Alan Marshal). Nora and a reluctant Nick rush to her side at the stuffy mansion where she lives with her overbearing, judgmental mother (Jessie Ralph). The couple promises Selma they'll try to track Robert down, and while unwinding at a Chinatown night spot later in the evening, they espy the philandering cad dallying with the joint's sexy singer, Polly Byrnes (Dorothy McNulty), who's plotting with the club's shady owner (Joseph Calleia) to blackmail him. Nick and Nora also discover Selma's former flame David (James Stewart), who still holds a torch for her, recently offered Robert a sizable sum of money to get out of Selma's life for good.

Of course Robert ends up dead hours later, and when police lieutenant Abrams (Sam Levene) arrives to investigate, all the evidence points to Selma. Nick and Nora, though, believe she's innocent, and as New Year's Day dawns, they set out to untangle the twisted case. Thrills, banter, and cocktails galore ensue as the sophisticated sleuths uncover clues, interrogate suspects, and ultimately reveal the cold-blooded killer.

Hammett once again supplies the story and the durable husband-and-wife writing team of Frances Goodrich and Albert Hackett (best known for It's a Wonderful Life, Father of the Bride, and The Diary of Anne Frank) once again supplies the script. Plenty of clever repartee punctuates the picture (when Nora asks Nick "Are you packing?" as the train pulls into San Francisco, he responds while pouring himself a drink, "Yes, I'm just putting away this liquor.") and there's even some romantic intrigue involving Nick and Nora's precocious dog Asta, who tries to keep a neighboring canine away from Mrs. Asta and their pups. Asta became Hollywood's top dog after the first Thin Man movie, and he gets star billing and a healthy chunk of screen time here.

Perhaps a bit too much. The Oscar-nominated screenplay deftly mixes daffy screwball and hard-boiled crime elements, but director W.S. Van Dyke (who also helmed the original Thin Man) occasionally takes his foot off the gas, lingering too long on the Asta subplot and a few other comedic and expository scenes. At 112 minutes, After the Thin Man stands as the longest film in the six-film Thin Man series, and though the intricate story is well told, it takes a while to pick up speed, occasionally meanders, and would benefit from some judicious tightening. (One hilarious scene that shouldn't be cut focuses on Nora's elderly male relatives, who fall asleep around the dinner table while sipping their brandy. Each one has a distinctive snoring style and the resulting cacophony recalls and rivals the equally uproarious symphony of farts around the campfire in Blazing Saddles.)

The more I see William Powell, the more I admire his versatility and underrated talent. Powell can be a dashing leading man one minute, an uninhibited clown the next, and then morph into a macho tough guy. After the Thin Man allows him to indulge all three personas while creating delicious chemistry with the always adorable Loy. Her button nose, pursed lips, twinkling eyes, arch wit, and dry line deliveries make Loy as alluring as any bosomy blonde, while her spunky portrayal makes her every inch Powell's equal...quite an achievement in an era of female subservience.

After the Thin Man would be the young Stewart's eighth film of 1936, and it really shows off his star potential. His electrifying work in the climax previews his inevitable rise to leading roles, and he fits snugly into the film's colorful ensemble. Landi, who made a huge splash in Cecil B. DeMille's The Sign of the Cross a few years earlier, would appear in only two more movies before leaving Hollywood for the stage and a successful career as a novelist, while the 31-year-old Levene, in only his second film, makes a strong impression that heralds his future success as an accomplished character actor. (Levene would reprise his role as Lt. Abrams in Shadow of the Thin Man five years later.) McNulty, who would soon change her name to Penny Singleton and star in a whopping 26 movies based on the Blondie comic strip - and later provide the voice of Jane Jetson in the animated The Jetsons TV series - provides sass and sex appeal, and eagle eyes will spot Ward Bond, appearing in his 25th film of 1936, in an unbilled bit.

After the Thin Man may not surpass the original Thin Man film, but this highly entertaining mystery strikes all the right notes. As sequels go, it's pretty solid, and leaves us with an enticing cliffhanger for Nick and Nora's next adventure. Lucky for us, Another Thin Man will arrive on Blu-ray very soon, and we can only hope the rest of this beloved series is in the Warner Archive high-def pipeline. 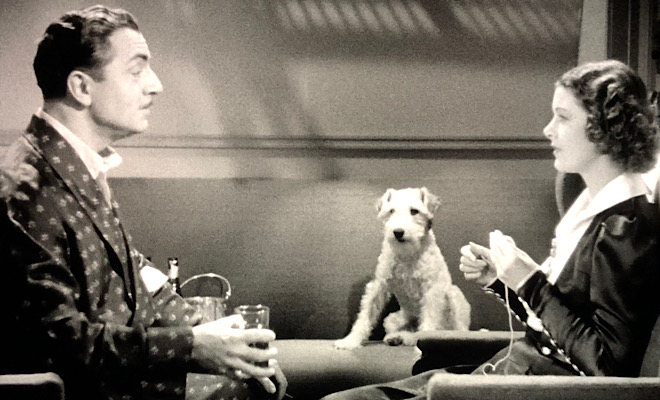 After the Thin Man arrives on Blu-ray packaged in a standard case. Video codec is 1080p/AVC MPEG-4 and audio is DTS-HD Master Audio 2.0 mono. Once the disc is inserted into the player, the static menu without music immediately pops up; no previews or promos precede it.

A brand new 4K restoration struck from the film's best surviving elements yields another terrific Warner Archive 1080p/AVC MPEG-4 transfer of a 1930s classic. A healthy amount of grain is visible, but that's typical for a film of this vintage. Though the texture appears more pronounced during scenes transpiring amid the Frisco fog, the overall effect beautifully evokes the feel of celluloid. Deep black levels, bright, well-defined whites, and nicely varied grays combine to create a clear image with good contrast and a fair amount of depth. Excellent shadow delineation and sharp close-ups of all the principal players enhance the experience, and no nicks, marks, scratches, or other age-related imperfections sully the pristine print.

Restoring 1930s films takes a great deal of time, painstaking effort, and a ton of money, but legions of classic movie fans appreciate Warner Archive's meticulous work and commitment to preserving Hollywood's priceless heritage. After the Thin Man is just one more example of the studio's impeccable handiwork.

Considering the film's advanced age, the DTS-HD Master Audio 2.0 mono track supplies surprisingly good sound. The rapid-fire dialogue is well prioritized and easy to comprehend even when competing with other sonic elements. Gunshots, shattering glass, the yapping barks of Asta, and the various exaggerated snores of the old men are crisp and distinct, while the cacophonous revelry of the nightclub scenes fills the room without overwhelming the on-screen action. A wide dynamic scale handles all the effects and Herbert Stothart's music score without a hint of distortion, and no age-related hiss, pops, or crackle intrude. Sometimes the audio sounds a tad tinny or a bit harsh, but that's a symptom of the era's primitive recording equipment, not a deficient transfer. If only all movies from the mid-1930s could sound this good.

All the supplements from the 2005 DVD have been ported over to this Blu-ray release.

Few sequels can top the original, and though After the Thin Man isn't the exception that proves the rule, it stands as a solid, entertaining follow-up to its classic forerunner. William Powell and Myrna Loy return as the cocktail-swigging sleuths Nick and Nora Charles, who spring into action on New Year's Eve to solve a murder that hits a little too close to home. Snappy direction, a smart script, and a stellar supporting cast that includes a young James Stewart enhance this breezy comedy-mystery, while a top-notch transfer, excellent audio, and a few vintage supplements distinguish another glorious Blu-ray presentation from Warner Archive. Recommended.