Hollywood is known for hyperbole, but The Naked City tells the naked truth. One of the first motion pictures shot entirely on location in a major metropolis, director Jules Dassin's film celebrates New York's vital populace while condemning the crime and corruption woven into the city's complex fabric. Part semi-documentary, part police procedural, and part film noir, this riveting chronicle of an NYPD murder investigation puts us on the street with cops, thugs, average Joes and Janes, and the sophisticated elite. The ensemble cast portrays an array of colorful characters, but the Big Apple is the movie's undisputed star, and Dassin showcases it with an intoxicating mixture of glamor and grit.

Following World War II, Americans craved more realistic films that accurately depicted their problems and addressed the challenges they faced. Producer Mark Hellinger and writer Marvin Wald tapped into that desire by creating a movie that eschewed soundstage artifice in favor of real-world authenticity. To film an entire movie on location in a city as dense and complex as New York was a novel - and daunting - idea, but Universal went all in, and once Dassin and cinematographer William Daniels grabbed the reins, they brought this ambitious project to breathtaking fruition.

The Naked City opens, quite fittingly, with a series of striking aerial shots of the New York skyline. There are no title cards or credits (those come at the end of the film), just narration from Hellinger that sets the scene and acknowledges the contributions of the cast, crew, and the Big Apple itself. (The narration continues intermittently throughout the movie and becomes a highly effective narrative tool.) Soon the camera descends to the streets and provides random snapshots of city life before abruptly cutting to a dark apartment where two hitmen are bumping off a beautiful blonde. That blonde turns out to be Jean Dexter, a former dress model in a chic boutique whose hunger for the high life leads her into a jewelry theft racket that eventually gets her killed. Veteran homicide detective Lt. Dan Muldoon (Barry Fitzgerald) gets the case and works with rookie officer Jimmy Halloran (Don Taylor) and an army of NYPD crime specialists to solve the whodunit. 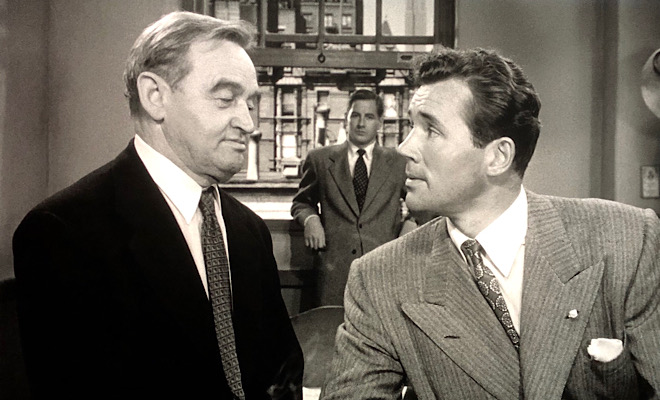 The screenplay by Wald and Albert Maltz (one of the famed Hollywood Ten, a group of writers who would be fined, jailed, and later blacklisted for refusing to comply with the demands of the House UnAmerican Activities Committee [HUAC]) takes us through the process step by step, from crime scene and crime lab work to strategy sessions, witness interviews, and suspect pursuits. Sometimes police procedurals can be dry and dull, but through the eyes of Dassin, who channels the neorealism of Italian directors Roberto Rossellini and Vittorio De Sica, and the lens of Daniels, who would win an Oscar for his exceptional photography, we see a city that teems with life.

Every location in Manhattan, Queens, and Brooklyn provides priceless atmosphere and a true you-are-there feeling that adds vitality and urgency to the drama while heightening its impact. We can almost breathe the city's acrid fumes and feel its grime as we watch the police pound the pavement in search of clues and leads. Strikingly, the depicted landmarks aren't painted backdrops, rear projection shots, or flimsy reproductions, but rather the actual pillars of an iconic metropolis, just like the less heralded mom-and-pop businesses, office buildings, precincts, and tenements where much of the tale transpires.

The Naked City is also notable because it pioneered what would become a Hollywood action movie staple - the chase scene. Once you see the first pursuit that starts on the streets and ends at an elevated train station, you won't be able to shake the notion that it inspired the famous subway scene in The French Connection. That's just a warm-up, though, for the climactic chase that culminates not just on the Williamsburg Bridge, but up on top of it. Logistical and structural challenges must have made this sequence a nightmare to shoot, but the effort yields rich rewards. Distinguished by ingenuity, packed with arresting camera angles, and brimming with excitement, the chase not only caps off a riveting story, it's also a flat-out brilliant display of filmmaking that would influence directors for generations to come. 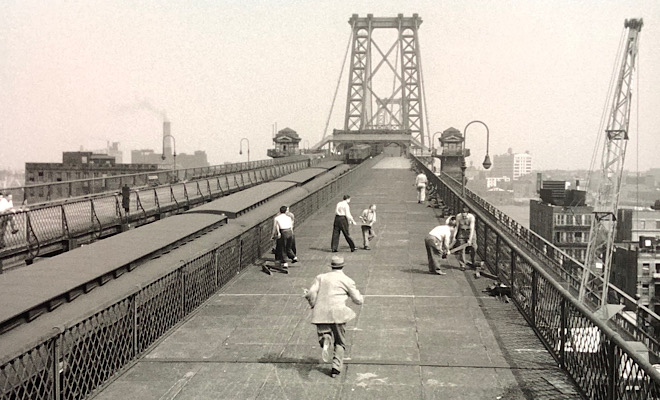 Dassin and Daniels make a dynamic duo, but the natural performances by a cast of largely unknown actors further enhance the realistic presentation. Fitzgerald, who's best known for his Oscar-winning portrayal of a crusty Irish priest in Going My Way, might seem like an odd choice to play a tough NYPD detective in a gritty film noir (Fitzgerald himself thought so, too), but the diminutive 60-year-old actor becomes a towering presence over the movie's course. His quiet confidence and no-nonsense attitude reflect the film's just-the-facts-ma'am tone, but moments of impish charm and empathetic warmth add an essential human element to his character.

Classic movie fans certainly remember Taylor as the affable fiancé of Elizabeth Taylor (no relation) in the original Father of the Bride, but the lanky actor makes a much stronger impression here as an earnest, enthusiastic, yet green detective who recklessly puts himself in harm's way to catch a killer. Howard Duff made his film debut the previous year in Dassin's Brute Force, and his sterling work earned him a bigger role in The Naked City. As a shady, wannabe big shot who gets in over his head, Duff projects a potent magnetism and makes the most of his juicy part.

Both Duff and Dassin also would face heat from HUAC. Shortly after The Naked City, Dassin would flee the U.S. and work primarily in Europe for the rest of his career, while Duff emerged battered but largely unscathed because of his marriage to actress-director Ida Lupino. One can only wonder how far each man - and Maltz, too - might have gone in Hollywood had they not been targeted and persecuted by such a vicious body.

The Naked City didn't single-handedly change the face of American moviemaking, but it opened Hollywood's eyes to the visceral power and dazzling impact of location shooting and realism. It also would spawn a highly successful TV series that would use the picture's signature last line - "There are eight million stories in the naked city. This has been one of them." - as its catchphrase. Today, the film still packs a punch, thanks largely to Dassin's craftsmanship, the taut script, and the production's ambitious nature. Many films try, but The Naked City succeeds in laying New York bare, and in so doing, exhilarates everyone who appreciates the art of film. 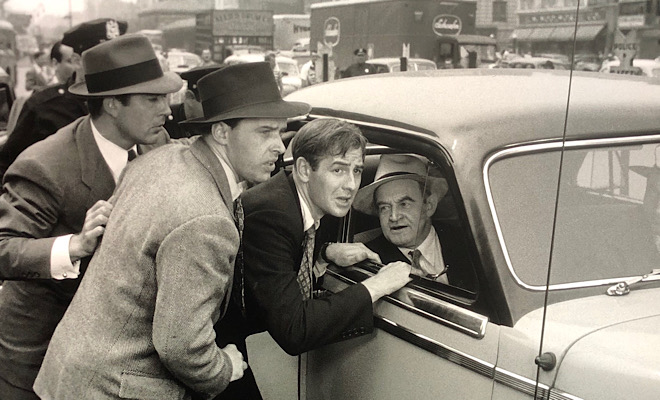 The Naked City arrives on Blu-ray packaged in a standard Criterion case. A 14-page booklet featuring an essay by author Luc Sante, an archival memo from producer Mark Hellinger to director Jules Dassin regarding the movie's climactic chase scene, a cast and crew listing, and restoration notes is tucked inside the front cover. Video codec is 1080p/AVC MPEG-4 and audio is LPCM mono. Once the disc is inserted into the player, the static menu with music immediately pops up; no previews or promos precede it.

A painstaking 4K restoration of The Naked City yields a magnificent 1080p/AVC MPEG-4 transfer that faithfully honors and celebrates the Oscar-winning cinematography of the great William Daniels. According to the liner notes and an on-screen restoration explanation that precedes the film, distributor changes over the years altered the picture and sound elements of The Naked City, while poor handling and general decay accelerated the movie's "massive deterioration." In 2016, the current rights owner ordered a "complete and extensive restoration for preservation," and after a search to find the film's original nitrate negative proved fruitless, "a total of 13 elements were selected and used, among them a nitrate fine grain and a safety duplicate negative recently discovered at the British Film Institute." The frame-by-frame 4K restoration took two years to complete, and the results exceed even the wildest expectations.

From the opening aerial shots of the New York skyline right down to the smallest details, this transfer delivers a crisp yet lush picture that beautifully reflects the glamor, grit, and grime of the Big Apple locations. Excellent clarity, contrast, and grayscale bring all the details to brilliant life, and the natural grain structure remains intact, preserving the film-like look and enhancing the movie's realistic feel. Rich, inky blacks and bright whites anchor the image, while superior shadow delineation supplies marvelous contours.

Background elements like wallpaper patterns, rug textures, and bits of decor are wonderfully sharp, and close-ups nicely show off fine facial features, glistening sweat, blemishes, and stubble. Only a few errant nicks and marks sully the pristine print, which exudes marvelous vibrancy and depth. The Naked City used to look ragged and worn, but this restoration completely revitalizes this classic film and allows us to fully appreciate the vision and craftsmanship that make it such a stunning achievement.

According to the liner notes, "the soundtrack was remastered primarily from the 35 mm nitrate fine-grain variable-density soundtrack, as well as the 35 mm original sound negative." The resulting LPCM mono track really thrusts us into the hustle and bustle of the New York City streets, but keeps extraneous cacophony at bay and remains crisp and clear throughout. So many location films of the period feature rough, hollow-sounding audio, but The Naked City track is smooth and distinct. The honking horns, blaring sirens, car engines, elevated trains, shuffling feet, and constant buzz of voices underscore the action, but dialogue is always well prioritized and easy to comprehend. A wide dynamic scale handles all the highs and lows of the robust music score - a joint effort between Frank Skinner and Miklós Rózsa - without a hint of distortion, silences are clean, and no age-related hiss, pops, or crackle intrude. Though the video is the undisputed star of this release, the audio comes very close to equaling it.

Criterion supplies a stellar supplemental package that puts The Naked City in context and enhances appreciation of this groundbreaking classic. Though the restoration credits at the end of the film denote the original theatrical trailer was also restored, it is not included on this disc.

A landmark film for its all-location shooting and semi-documentary style, The Naked City thrusts viewers into the thick of a New York City murder investigation while exploring all the diverse slice-of-life elements that fuel the Big Apple. Director Jules Dassin's ambitious, absorbing, and impeccably executed production ushered in a new era of moviemaking, and it remains just as impressive today as it surely seemed more than seven decades ago. A meticulous, often dazzling 4K restoration makes The Naked City feel more immediate than ever before and fosters renewed appreciation for William Daniels' Oscar-winning cinematography. Excellent audio and a nice supplemental package also distinguish this terrific Criterion release that demands a spot on every cinephile's shelf. Must Own.