Nick and Nora Charles pay a visit to Nick's parents (with Asta in tow, of course) and - surprise! - wind up investigating a murder in The Thin Man Goes Home, the fifth entry in the always amusing comedy-mystery series. Once again, William Powell and Myrna Loy banter to perfection in this fun-loving film that's been given a glorious makeover by the folks at Warner Archive. A brand new remastered transfer struck from the best preservation elements, solid audio, and a couple of vintage supplements distinguish another top-flight Thin Man release. Recommended.

Wherever Nick and Nora Charles go, murder seems to follow...even when the debonair sleuth and his perky wife take a brief vacation to visit his aged parents in the tranquil village of Sycamore Springs. The Thin Man Goes Home chronicles that (very) eventful trip with the franchise's inimitable mix of whimsy, violence, and suspense, yet if the fifth installment of the popular comedy-detective series seems a tad sedate, here's why: it's a completely non-alcoholic cinematic cocktail.

What? No martinis? No tipsy Nick raising one glass after another...and another...and another? Say it ain't so! A Thin Man movie without alcohol is like New Year's Eve without champagne, Christmas without Santa Claus, Abbott without Costello! Though it pains me to report The Thin Man Goes Home is indeed dry as a bone, there's a reason behind the bone-headed decision to put bon vivant Nick on the wagon. Liquor shortages during World War II led to rationing, so of course, good citizens like Nick and Nora (William Powell and Myrna Loy) must do their part to help the cause. That's why writers Robert Riskin (It Happened One Night) and Dwight Taylor force Nick to eschew vodka and gin in favor of apple cider as part of a lame personal "reform movement" that never quite rings true. (Why they didn't just incorporate liquor rationing into the plot remains a mystery.) Nick handles his sobriety well, but to keep the audience from suffering too many withdrawal pangs, he still lustily swigs his juice from his trusty, industrial-sized silver flask. (Old habits die hard.) 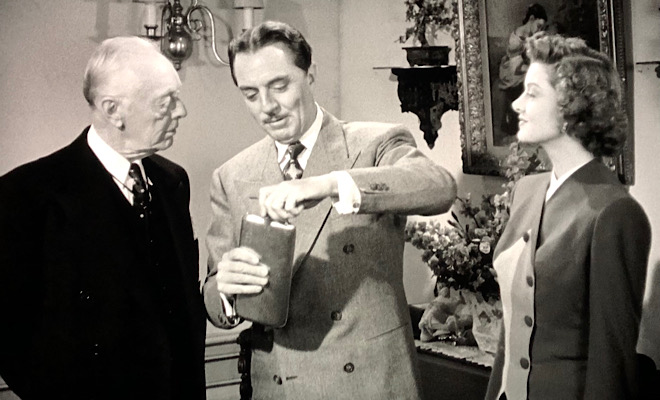 At one point Nora quips she likes Nick better when he's drinking - and so do we! - but lest you think the lack of liquor rubs the rosy bloom off this Thin Man episode, rest assured there's still plenty of fizz in director Richard Thorpe's film. The Charles' may not knock back any highballs, but their charm is intoxicating enough to keep us pleasantly buzzed from beginning to end.

Alcohol isn't the only absent element in The Thin Man Goes Home. The writers also ditch Nick Jr., who's supposedly so enamored with kindergarten his mom and dad can't bear to tear him away to visit his grandparents! (You miss a few days of school when you're 5 and you just never catch up!) Thank goodness Asta is still on hand, although the playful pup is portrayed by a brand new dog (the original Asta reportedly aged out of the role), and in a blast from the past, original Thin Man alum Edward Brophy returns, but not as gangster Joe Morelli. In The Thin Man Goes Home, Brophy plays Brogan, an affable old crony of Nick's who's now a traveling greeting card salesman.

Nick may be a renowned detective, but he still seeks the approval of his crusty, close-minded father (Harry Davenport), an esteemed physician who not only resents Nick's decision to become a policeman, but also deplores his party-boy lifestyle. Nora believes if Nick's dad could just see his son in action, Nick would gain the respect he desperately craves, so she plants a bogus item in the local newspaper claiming Nick is in town to investigate a crime. Though Nick's mother (Lucile Watson) can't imagine anything nefarious occurring in sleepy Sycamore Springs, the article ruffles the feathers and jangles the nerves of several local residents who might have something to hide. All the tension leads to a murder, and when Nick begins nosing around, he discovers his idyllic hometown is a hotbed of scandal, intrigue, and skullduggery...more like Peyton Place or Kings Row than Shangri-la. 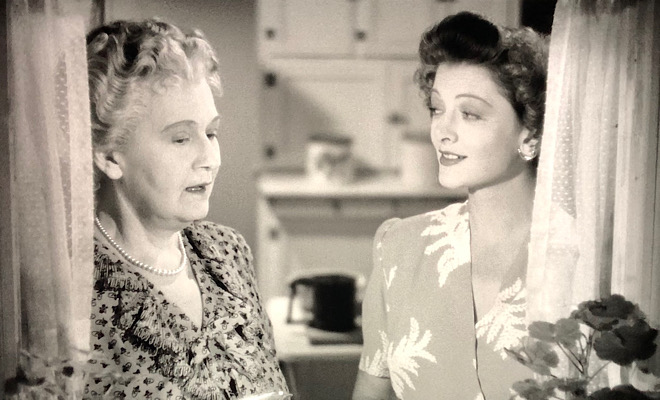 The only Thin Man movie made during World War II, The Thin Man Goes Home incorporates issues of patriotism and post-traumatic stress into its mystery, while also satirizing the crowded wartime passenger trains that packed riders into cars like sardines. (Watching Nick and Nora squeeze their way down the cramped aisles is a hoot.) Other comic highlights include Powell's patented pratfalls, a barroom brawl, and a wild jitterbug dance that makes Loy, who gets tossed around like a rag doll by her strapping partner, lose her equilibrium.

All the Thin Man movies boast strong supporting casts and The Thin Man Goes Home is no exception, with such accomplished performers as Watson, Davenport, Anne Revere (who would win a Best Supporting Actress Oscar the very same year for National Velvet), Gloria DeHaven, Leon Ames, Donald Meek, and Helen Vinson in her final film appearance playing an array of quirky character parts. Revere is especially good as Crazy Mary, bringing heartbreaking warmth to a cartoonish role, and eagle eyes will spot the distinctive Connie Gilchrist and hulking Mike Mazurki (right before he made his big splash as Moose Malloy in the iconic noir Murder, My Sweet) in brief bits. 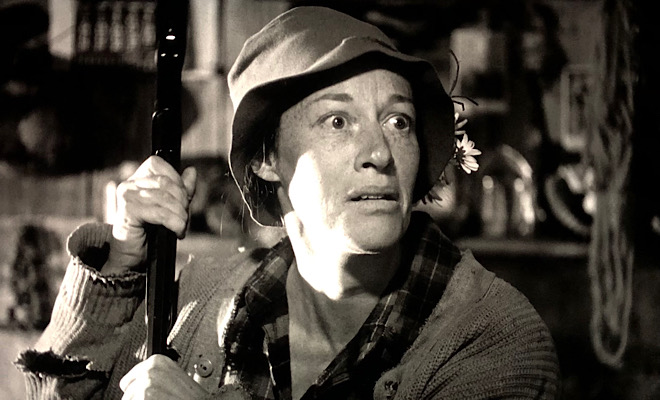 Though Thorpe nicely replicates the flavor of the previous installments and juggles the mix of murder and comic mayhem with aplomb, The Thin Man Goes Home lacks the snappy pacing that defines the Thin Man movies directed by W.S. Van Dyke II. (Sadly, Van Dyke died the year before this episode went into production.) Some judicious tightening would improve a few scenes, but when things begin to drag, Powell and Loy always pick up the slack. The dynamic duo never skips a beat or misses a chance to playfully rib each other. In fact, they look so relaxed and comfortable together and seem to share such genuine affection, it's no wonder many moviegoers assumed Powell and Loy also were married in real life.

Most movie series start to stumble after a couple of go-rounds, as the writers struggle to come up with fresh ideas and compelling material, but the Thin Man films never succumb to that malaise. A remarkable consistency sustains the franchise and, in this case, helps The Thin Man Goes Home prove you really can go home again...if you do it right. 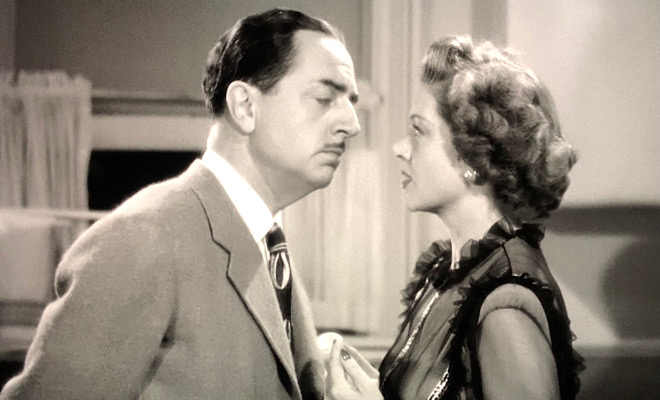 Vital Disc Stats: The Blu-ray
The Thin Man Goes Home arrives on Blu-ray packaged in a standard case. Video codec is 1080p/AVC MPEG-4 and audio is DTS-HD Master Audio 2.0 mono. Once the disc is inserted into the player, the static menu with music immediately pops up; no previews or promos precede it.

A new high-def master struck from a 4K scan of the best preservation elements yields a highly pleasing 1080p/AVC MPEG-4 transfer that faithfully honors Karl Freund's cinematography while revitalizing this 78-year-old classic. The natural grain structure lends the image a distinct film-like flavor, and though a few fluctuations grab attention (it's possible some isolated shots might have been drawn from an alternate, less pristine source), the instances are brief. Excellent clarity and contrast, lush blacks, bright whites, and nicely varied grays all combine to produce a well-balanced, vibrant picture brimming with depth and detail. Costume textures come through well, solid shadow delineation boosts the impact of nocturnal scenes while keeping crush at bay, and no nicks, marks, or scratches dot the print. Fans of the series will be delighted with this top-notch effort that certainly outclasses any previous home video transfer.

The DTS-HD Master Audio 2.0 mono track supplies clear, well-modulated sound. The tranquil suburban backdrop of The Thin Man Goes Home keeps this track relatively sedate, but a few sonic accents like screams, shattering bric-a-brac, and one huge blast from an antique revolver spice up the soundscape from time to time. Though David Snell's score isn't particularly prominent, a wide dynamic scale manages the highs and lows of the familiar title theme and suspenseful undertones without any distortion. All the repartee is easy to comprehend and no age-related hiss, pops, or crackle intrude. This unobtrusive track may lack flash, but it gets the job done with a minimum of fuss.

Nick and Nora may be on the wagon, but the lack of martinis only slightly dulls the appeal of the fifth entry in the Thin Man series. Wartime intrigue and satire fuel The Thin Man Goes Home, which chronicles Nick's investigation of a murder in his not-so-sleepy hometown. William Powell, Myrna Loy, and a sterling supporting cast keep the franchise in high gear, while a marvelous transfer struck from a 4K scan of the best preservation elements, solid audio, and a couple of vintage extras distinguish Warner Archive's top-notch Blu-ray presentation of this captivating mystery-comedy. Recommended.