An episodic story about mentally damaged G.I.s and the dedicated doctor who tries to put their shattered lives back together, Captain Newman, M.D. enlightened audiences of its day about the horrors of post-traumatic stress, but despite earnest performances and slick direction from David Miller, this uneven blend of drama, comedy, and romance seems simplistic and trite today. Gregory Peck, Tony Curtis, Angie Dickinson, Bobby Darin, and a young Robert Duvall supply ample star power, and a pleasing transfer and solid audio perk up Kino's Blu-ray presentation. Captain Newman, M.D. may not be the best World War II medical film, but if you're a fan of the cast and genre, it's certainly worth a look.

How do you follow up Atticus Finch? Well, if you're Gregory Peck and you're fresh from winning a Best Actor Oscar for To Kill a Mockingbird, you play a humble doctor in a psychiatric military hospital who thinks outside the box to heal the bruised psyches and broken spirits of young G.I.s in World War II. The title character in Captain Newman, M.D. may not be a showy role, but it fits the stoic, forthright, square-jawed Peck like a glove. Though several Finch-ian qualities pepper the part, unfortunately those parallels and Peck's talent and magnetism aren't enough to elevate this uneven mix of comedy and drama that tackles an important theme, but lacks the necessary sting to make it resonate.

It's 1944 at the Colfax Air Force Base in Arizona and Dr. Josiah Newman (Peck), the head of the military hospital's psychiatric ward, has his hands full. Understaffed, lacking resources, and battling a bureaucracy that doesn't yet understand what would later become known as Post-Traumatic Stress Disorder (PTSD), Newman must often fly by the seat of his pants, trying out rash therapies and acting on hunches to mend the fractured minds of young soldiers. "A symptom is a red flag with danger written all over it," Newman opines, and aided by his loyal - and, of course, gorgeous - nurse, Lt. Francie Corum (Angie Dickinson), to whom he becomes romantically attached, and Corp. Jake Leibowitz (Tony Curtis), a spirited orderly who bends the rules whenever necessary to support Newman's cause, the good doctor treats those myriad symptoms as best he can. With admirable forbearance, he balances success and failure against the sober prospect of sending the men he heals right back into battle, where they'll likely face further horrors that will scar them again...if they're lucky enough to survive.

Three cases comprise the bulk of the narrative, and guilt is the cancer that systematically eats away at each of the afflicted men's minds. Colonel Norval Bliss (Eddie Albert) has developed schizophrenia and is subject to violent outbursts due to devastating decisions he made in the heat of battle that cost many soldiers their lives. Captain Paul Winston (Robert Duvall), who hails from a wealthy family with a strong military tradition, remains trapped in a catatonic state after spending 13 months in a French basement to escape the Nazis. (His frosty wife Helene [Bethel Leslie] rushes to his side, but seems more concerned with maintaining proper decorum than getting her husband the treatment he needs.) And then there's Corporal Jim Tompkins (Bobby Darin), a hard-drinking, brash, arrogant young buck who's haunted by a traumatic battle episode, the memory of which is buried deep within his psyche and requires a hefty dose of Sodium Pentothal to bring to the surface. 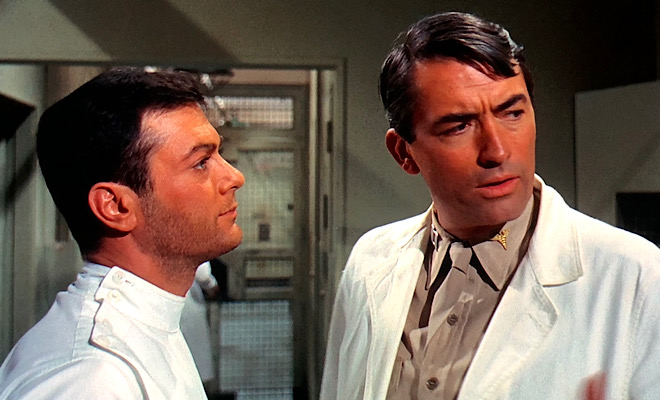 An episodic comedy-drama that borrows elements from Mister Roberts, Operation Petticoat, and The Snake Pit, director David Miller's slick adaptation of Leo Rosten's novel ambles amiably along, but never strikes the proper balance between laughs and tears. Some have termed the movie a prototype for the TV series M*A*S*H, but whereas M*A*S*H was most definitely a comedy with occasional serious overtones, Captain Newman, M.D. stubbornly adopts a 50/50 approach, as if it can't make up its mind which path it wants to take. As a result, the humor often feels disjointed, as if it's inserted merely to dilute and temper the story's serious nature.

The Oscar-nominated script by Richard L. Breen and Henry and Phoebe Ephron (Nora and Delia's parents) effectively depicts the military's grudging acceptance of psychological trauma as a serious diagnosis, and most likely opened the eyes of many viewers who had never witnessed the mental devastation so many servicemen experienced. PTSD is such a normal part of our lexicon today, it's hard to believe the syndrome once was dismissed as psychobabble and Newman could be viewed by his superiors as an eccentric renegade...not quite a quack, but close. Though in 2021 many of the random patients in the psycho ward seem like caricatures - and occasionally Bliss, Winston, and Tompkins do, too, despite the film's sensitive treatment of their respective illnesses - Captain Newman, M.D. just might be responsible for creating stereotypes that would be recycled and spoofed for decades to come. If Bliss, Winston, and Tompkins look familiar, it's because we've seen them in some form in scads of other movies. Most likely, though, we saw them here first.

Rosten based Captain Newman on the real-life Dr. Ralph Greenson, a noted psychiatrist who became arguably Hollywood's most celebrated shrink after his military tenure. His most famous client would be Marilyn Monroe, and if Greenson's name rings a bell, it's because he found himself smack-dab in the middle of numerous conspiracy theories surrounding the star's mysterious death. What Greenson knew, what he did and didn't do, and how forthcoming he was with investigators remain controversial topics almost 60 years later, but his admirable and pioneering work during World War II should not be overshadowed by such a notorious episode. 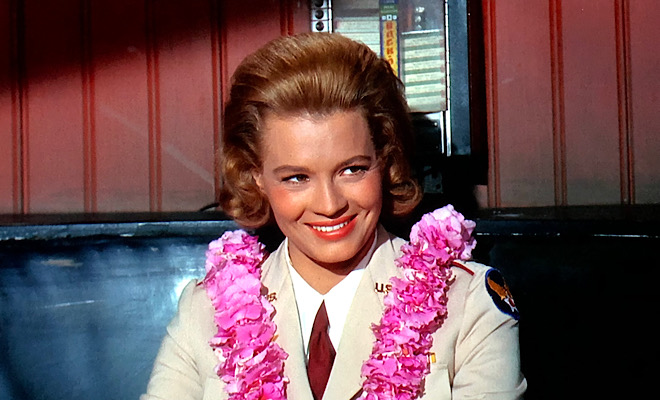 Peck rarely played colorful characters and Captain Newman is about as bland as they come. Nevertheless, he cuts a dashing figure in his uniform, flirts charmingly with Dickinson, and expresses concern, exasperation, and weight-of-the-world worry with typical earnestness and easygoing grace. Dickinson looks especially lovely and does what she can with a thankless role, while the boisterous Curtis clowns a bit too much. As the self-appointed hospital morale booster, he supplies most of the comic relief, but much of the mayhem he incites seems superfluous, especially a lengthy gag about a stolen salami that stalls the story's momentum.

Peck and Albert appeared together as pals in Roman Holiday a decade earlier, but their relationship is far different here. Albert enjoys some fine moments, but the manner in which the script deals with his character's split personality seems hackneyed today. Darin, on the other hand, steals the picture as the tortured Tompkins, who relives the horrors of battle under truth serum in a harrowing scene that justly earned the music icon an Oscar nomination for Best Supporting Actor. Darin, with his slightly slumped shoulders, cocky grin, and twinkling eyes is the heart and soul of Captain Newman, M.D., although Duvall, in a less showy role, gives him a run for his money. In his first part after making a splash as the reclusive Boo Radley in To Kill a Mockingbird the year before, Duvall plays a similarly withdrawn, disturbed, and largely mute character, but gets a better chance to show off his acting chops in an emotionally wrenching scene late in the film. Duvall also deserved an Oscar nod, but had to wait nine years before receiving his first in The Godfather.

Captain Newman, M.D. is breezy, entertaining, well acted, and occasionally moving, but all those parts never quite add up to a resonating whole. The film should be a searing drama, but spends too much time milking tepid laughs, much to its detriment. War is indeed hell, but building a feel-good movie around that premise is a tall order, and Captain Newman, M.D., despite excellent intentions, comes up a bit short. 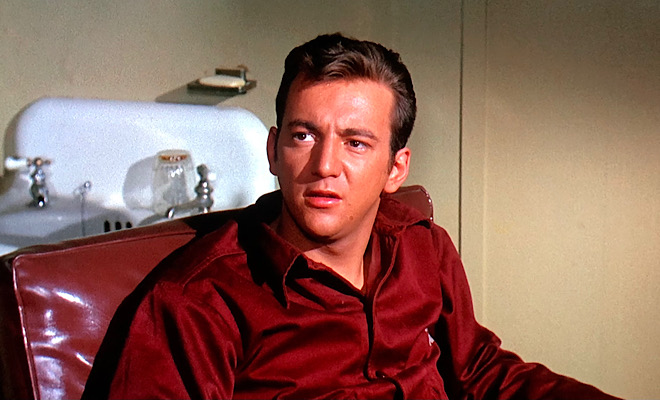 Captain Newman, M.D. arrives on Blu-ray packaged in a standard case. Video codec is 1080p/AVC MPEG-4 and audio is DTS-HD Master Audio 2.0 mono. Once the disc is inserted into the player, the static menu with music immediately pops up; no previews or promos precede it.

Some mild speckling and a couple of blotches only slightly mar this appealing 1080p/AVC MPEG-4 transfer from Kino. The color cinematography of the esteemed Russell Metty is typically lush (the reds on the American flag and the crosses that adorn the army ambulances are especially vivid), although some age-related fading afflicts a few scenes. Noticeable but not overwhelming grain preserves the feel of celluloid, and while transitions can be rough and some moments of softness creep in from time to time, the quality of the overall presentation remains high throughout. Excellent clarity and contrast produce an often arresting image that's punctuated by deep blacks, bright, stable whites, and solid shadow delineation. Flesh tones err a bit on the rosy side during long shots, but close-ups look natural and their sharpness nicely highlights pores, stubble, and other fine facial features. It doesn't seem as if Captain Newman, M.D. underwent any kind of restoration before its Blu-ray release (nothing is mentioned on the packaging), and though it looks fine without it, the film surely would benefit from a little remastering here and there.

Captain Newman, M.D. received an Oscar nomination for Best Sound, and the solid DTS-HD Master Audio 2.0 mono track honors the work of Waldon O. Watson with a vibrant, well-modulated track. A wide dynamic scale handles all the highs and lows of Frank Skinner's music score without a hint of distortion, and effects like plane and Jeep engines, rain, and the banging of objects on walls are crisply rendered. All the dialogue is easy to understand and no age-related hiss, pops, or crackle intrude. The film's talky nature keeps the track subdued most of the time, but it rises to the occasion when necessary and delivers the goods.

Just a couple of extras round out the disc.