One of Henry Fonda's best roles and most famous films, Mister Roberts at last comes to Blu-ray boasting a brand new 4K remaster, potent multi-channel audio, and a wonderful audio commentary by Oscar-winning co-star Jack Lemmon. The story may be slight, but plenty of humor, heart, and memorable characters keep this chronicle of a restless crew aboard an aimless Navy cargo ship in the South Pacific during the waning days of World War II afloat. James Cagney and William Powell also file memorable performances in this solid adaptation of the long-running Broadway hit. Recommended.

Henry Fonda played many memorable characters during his 50-year stage and movie career, but the one dearest to his heart - and the role audiences most closely identified with the actor during his lifetime - was without a doubt Lt. Doug Roberts. The affable, earnest yet restless and yearnful hero of the Thomas Heggen-Joshua Logan play Mister Roberts served Fonda well, first on Broadway in 1948, then in the enormously successful 1955 screen adaptation directed by John Ford and Mervyn LeRoy. Though the film version's luster has faded somewhat over the past few decades, Mister Roberts remains a beloved and often captivating military comedy that celebrates the human spirit with humor, warmth, and insight.

Set during the final months of World War II, Mister Roberts chronicles life aboard the Reluctant, an insignificant Navy cargo ship that roams a remote area of the South Pacific, far from any combat. The tyrannical Lieutenant Commander Morton (James Cagney) rules the vessel with an iron hand, caring more about his prized potted palm tree and personal reputation than the welfare and low morale of his abused and resentful crew. The rank and file look up to Roberts, who tirelessly advocates for them while trying to appease and bolster the self-absorbed Morton. It's a distasteful, unfulfilling, and thankless job, but Roberts is so good at it, Morton refuses to honor any of his myriad requests for reassignment to a military hot zone. Desperate to fight meaningful battles instead of mediate petty squabbles between grown men who act like children, Roberts - with quiet dignity - keeps applying for transfers and dreaming of an honorable destiny, but will the war be over before he gets his chance to make a meaningful contribution to the Allied effort?

Plot comes at a premium in this episodic, character-driven comedy, but there's plenty of soul-searching and philosophizing, a few memorable confrontations, and the requisite amount of military hijinks. Couple all that with the magnetism of a top-notch cast that includes William Powell in his final screen role as the beleaguered ship doctor and Jack Lemmon in his Oscar-winning turn as the blustery yet meek, ever charming, and always horny Ensign Pulver, and Mister Roberts breezes amiably along. The film can feel stagy at times (despite the Hawaii and Midway Island locations and beautiful CinemaScope photography), the pacing lags here and there, and some of the direction is a bit static, but none of those issues impede or derail the entertaining and ultimately enriching story. 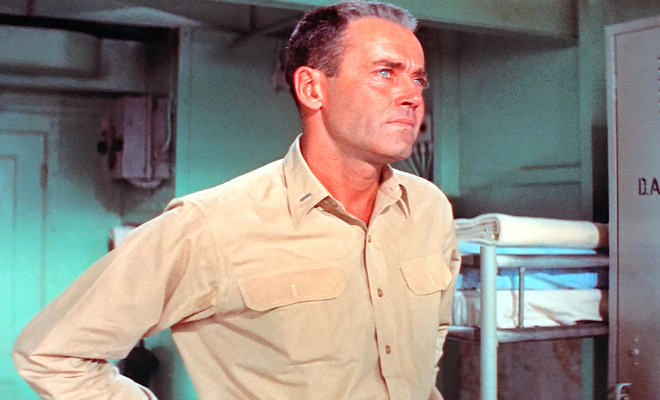 Fonda won a Tony Award for the Broadway production, which opened in 1948 and ran for 1,157 performances, but when it came time to cast the movie version seven years later, the almost-50-year-old actor was initially deemed too old to play the part he created. The producers preferred either Marlon Brando or William Holden, but Ford demanded Fonda and, lucky for us, got his way. Though Mister Roberts would mark Fonda's seventh collaboration with Ford, the two clashed bitterly during production. The sparring culminated with Ford reportedly slugging Fonda during a heated disagreement over the movie's tone.

Thankfully, none of the tension creeps into Fonda's easygoing, forthright performance that beautifully captures Roberts' frustrations, ennui, passionate patriotism, and deep regard for his fellow sailors, but it did take a toll on Ford. Plagued by ill health and mired in a foul mood throughout the shoot, the legendary director was replaced by LeRoy toward the end of production. LeRoy tried to emulate Ford's style, but after filming wrapped, Logan - much to Ford's chagrin - reshot a couple of key scenes, including the movie's climax, but declined screen credit.

Logan also co-wrote the script (with Frank Nugent) and somewhat softened and lightened the play's tone. The duo added humorous elements to Cagney's dour, sadistic Commander Morton and removed any overt evidence of the alcoholism that plagues Powell's Doc. The changes irked Fonda, who touted the original play as his "Bible," but they don't seem to harm the story's central elements, which many subsequent films and TV shows would copy. Though Mister Roberts pre-dates by three years the film version of Rodgers and Hammerstein's South Pacific (which - coincidentally or not - Logan would direct), it's tough not to draw parallels between the two movies, which share similar settings and the same military backdrop. Watching the sex-starved sailors go gaga over a corps of Navy nurses, I kept waiting for Ray Walston to pop up and lead them in a rousing chorus of "There Is Nothing Like a Dame." 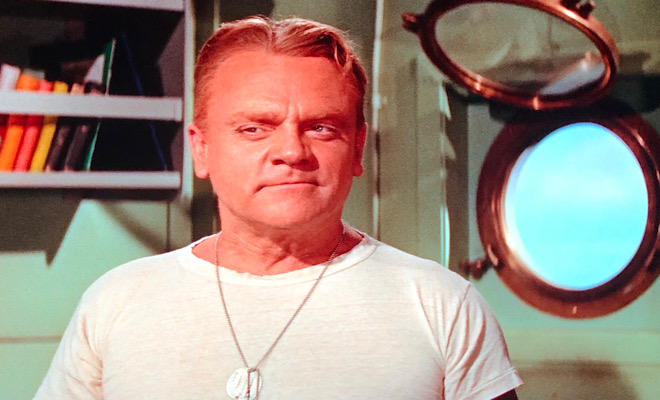 Cagney performs with customary relish (watching him say "Whoooooo did it?" after he discovers his precious palm tree is missing is sheer bliss), and when he and Fonda go toe-to-toe, they generate plenty of fireworks. Powell files a wonderfully natural and nuanced portrayal, Ward Bond (would it be a John Ford film without him?) is typically tough and gruff, and Betsy Palmer - 25 years before she went on an unforgettable homicidal rampage as the vengeful Mrs. Voorhees in the iconic slasher flick Friday the 13th - supplies a soupçon of sassy sex appeal.

It's Lemmon, though, who really revs the film's engine with a funny, spirited, utterly engaging performance that would win him a well-deserved Best Supporting Actor Oscar and set the bar for a gallery of subsequent comic portrayals in such iconic films as Some Like It Hot and The Apartment. Whether he's covered in soap suds after a laundry room explosion (see photo below), ogling a bevy of comely nurses, or memorably delivering the movie's famous last line ("Now what's all this crud about no movie tonight?!"), Lemmon steals focus whenever he's on screen and more than holds his own with such cinema icons as Fonda, Cagney, and Powell. Cagney writes in his autobiography he had trouble keeping a straight face while acting with Lemmon in the scene below.

Though the glossy Mister Roberts would lose the Best Picture Oscar to the low-budget, intimate Marty, it scored a huge box office success and influenced military comedies for years to come. This fine film may not wield the same degree of power and emotion it surely did just a few years after the end of World War II, but by mixing humor with patriotism and core American ideals, it continues to entertain and uplift audiences while reinforcing many of the personal qualities we revere. Other actors can play Doug Roberts, but Fonda embodies him, and his authentic portrayal is a big reason why Mister Roberts endures. 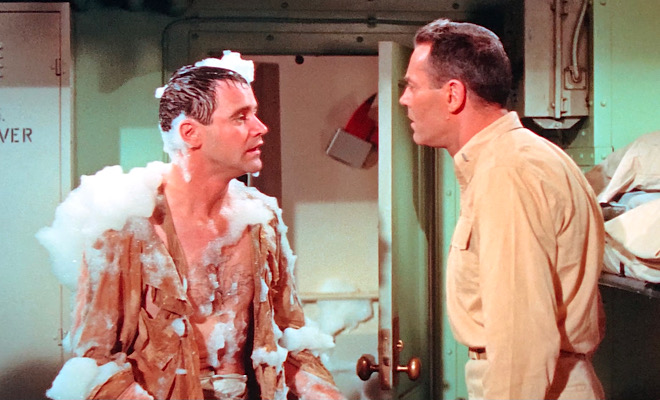 Mister Roberts arrives on Blu-ray packaged in a standard case. Video codec is 1080p/AVC MPEG-4 and audio is DTS-HD Master Audio 5.1. Once the disc is inserted into the player, the static menu with music immediately pops up; no previews or promos precede it.

A new high-def remaster from a 4K scan of the original negative yields a pleasing 1080p/AVC MPEG-4 transfer that - for the most part - features terrific clarity and contrast. Most of the movie looks brilliantly crisp and vibrant, but a few strangely fuzzy shots crop up now and then, looking as if they come from a different source. Though the instances are thankfully brief, they're no less jarring and dampen my enthusiasm just a tad for what is otherwise a stellar rendering of this 65-year-old classic. Light grain lends the image a lovely film-like feel, while palpable depth helps immerse us in the tropical setting, and bursts of bold color considerably punch up the picture. Vivid pink parasols and the pastel-hued flowers on the island leis grab attention, the blue-green ocean water sparkles, and nicely saturated reds and yellows make a statement. The flesh tones of the bronzed, often bare-chested sailors appear natural and stable throughout, their bright white uniforms never bloom, and deep black levels and excellent shadow delineation enhance nocturnal scenes. Razor-sharp close-ups showcase sweat, hair follicles, and fine facial details and no nicks, marks, or scratches mar the pristine print. Though the clarity variances mentioned above prevent this transfer from achieving a perfect score, it's tough to imagine Mister Roberts looking any better than it does here, and fans of the film should be quite pleased with this presentation.

Mister Roberts nabbed an Oscar nod for Best Sound Recording and this potent DTS-HD Master Audio 5.1 track reminds us why. Recorded in four-track stereo, Mister Roberts makes a seamless transition to 5.1, boasting crystal clarity and a surprising amount of distinct surround effects, which is rare for a film of this vintage. Noticeable stereo separation across the front channels nicely widens the soundscape and the subwoofer kicks into gear a few times to provide palpable bass accents. The laundry room explosion supplies a hefty rumble, and I nearly jumped out of my chair when the ship's alarm system suddenly went off late in the film. The rear speakers really join the party during that sequence, but they also embrace bits of subtle atmosphere and help Franz Waxman's robust music score fill the room with ease. A wide dynamic scale keeps distortion at bay, sonic accents like piercing whistles and sirens are crisp, and all the dialogue is well prioritized and easy to comprehend. Thankfully, no age-related hiss, pops, or crackle distract from the purity of this superior track that adds welcome flair to what is largely a talky film.

In addition to the film's four-minute original theatrical trailer, which is presented in high definition, the only extra is a terrific 1998 audio commentary delivered by the late, great Jack Lemmon. Lemmon passed away in 2001 (can it really be 20 years ago?), but his memories of shooting Mister Roberts live forever on this amiable, interesting track that's packed with anecdotes, observations, and insights about his co-stars, directors, and the art of acting. Lemmon muses about the toughness and manipulations of Ford, celebrates Fonda's brilliance, and notes he identified quite closely with the character of Ensign Pulver. He cites the role as "one of the biggest breaks of my life" and relates how his casting in the movie was "a fluke." Lemmon also recalls how he got the news of his Oscar nomination and shares Ford's gruff reaction to a couple of scenes that were reshot by Joshua Logan. Though plenty of lengthy gaps stall the track's momentum, Lemmon is so engaging and smart, it's worth hanging in until the end.

Arguably Hollywood's best military comedy, Mister Roberts blends humor with heart as it chronicles the aimless seafaring of a Navy cargo ship in the South Pacific during the final months of World War II. The screen adaptation of the hit Broadway play by Thomas Heggen and Joshua Logan creaks a bit around the edges, but the performances of Henry Fonda, James Cagney, William Powell, and Jack Lemmon remain timeless and carry this earnest and entertaining film. A brand new 4K remaster, potent lossless audio, and a rare Lemmon commentary track sweeten Warner Archive's Blu-ray presentation that revitalizes this beloved Best Picture nominee. Recommended.