Cary Grant (Father Goose) and Tony Curtis (Some Like It Hot), two of cinema’s most celebrated stars, provide the comedic pivot point in director Blake Edwards’ (The Pink Panther) Operation Petticoat. It’s hijinks on the high seas when revered Lt. Cmdr. Matt T. Sherman (Grant) and the somewhat unethical Lt. JG Nicholas Holden (Curtis) team to upright the USS Sea Tiger, a flagging submarine that’s seen better days. With some dubious maneuvering (and scavenged parts), things begin to look up for the old war horse until the ship and its crew are forced out to sea by a surprise attack. Limping along and barely held together with its borrowed parts, the Sea Tiger gets some unexpected company when five stranded Army nurses are brought aboard. The game gals will prove that necessity is indeed the mother of invention, initiating a series of renovations to make life aboard the Sea Tiger livable — with the exception of the sub’s accidental pink paint job. Not only is the ship now an eyesore, but a target for both the Japanese and American forces. Adding to the fun, both fore and aft, are a talented cast of supporting players that include Joan O’Brien (The Alamo), Dina Merrill (The Sundowners), Gene Evans (Shock Corridor), Dick Sargent (TV’s Bewitched), Arthur O’Connell (April Love), Gavin MacLeod (TV’s The Love Boat), Madlyn Rhue (A Majority of One) and Marion Ross (TV’s Happy Days). Operation Petticoat’s Academy Award® nominated screenplay was written for the screen by Stanley Shapiro and Maurice Richlin (suggested by a story by Paul King and Joseph Stone) and photographed by the great Russell Harlan (Red River, Rio Bravo).

Needless to say, the world is a very different place today than it was in 1959, when Blake Edwards' naval comedy Operation Petticoat premiered to rave reviews and huge box office. In fact, the political and social climates at the time of this writing have turned dramatically toxic in just the three short years since this particular film was last released on Blu-ray. Although my general feelings about the movie haven't changed, certain parts of it seem even more uncomfortably dated at this particular moment in time. Fair or not, the context of how and when we watch a movie can have a major impact in our engagement with it.

I provided a typical plot overview and so forth when I reviewed the film in 2014. Rather than repeat myself, I'll just direct readers to that article. I stand by everything I said there. By and large, the Cary Grant/Tony Curtis vehicle remains a delightful comic adventure filled with witty dialogue, clever situations and terrific cast chemistry. Surprisingly devoid of slapstick, it's a very sophisticated early work for Edwards, later the director of almost the entire Pink Panther franchise. Reportedly, the filmmaker himself didn't think much of the movie, probably because it was a for-hire assignment early in his career rather than a project he'd developed for himself. Nevertheless, its success launched him onto the Hollywood A-List, and the majority of the film holds up remarkably well nearly six decades later – aside from one pretty glaring aspect.

I noted in my previous review that the film's attitudes toward gender may be seen as sexist by a modern audience, but I largely brushed that off as being a product of its time. While that excuse is still true, I have to admit that some scenes really made me squirm in my seat this time around. When handsome playboy Lt. Holden (Tony Curtis) aggressively pursues pretty young Nurse Duran (Dina Merrill) despite her telling him that she has no interest in romance, he forces himself into her space and won't take no for an answer. The scene culminates with him kissing her until her resistance melts. Caught in the act by a superior officer, Duran apologizes for leading him on (by merely being an attractive female in his general vicinity, I suppose), and genuinely seems to feel guilty about it. Back in 1959, this scene probably seemed perfectly innocent, even charming. Why shouldn't two beautiful people flirt and fall in love, even if one has to work a little harder than the other to make that happen? Watched today, in an environment where nearly the entire entertainment industry is melting down over numerous sexual misconduct scandals, Holden looks like a real creep, especially when we learn that the character is engaged to another woman the whole time.

This comes on top of other scenes where Lt. Cmdr. Sherman (Cary Grant) expresses his exasperation at the indignity of having a bunch of women on his ship, and some of those women (including Sherman's eventual love interest) are portrayed in very stereotypical ways as klutzy ditzes. Again, this surely played as harmless when the film was made and released. And maybe it is. I doubt that anyone who worked on the movie had ill intent when writing, directing or performing these scenes. In fact, in some ways, the film was fairly progressive for its day, in that the women ultimately prove themselves valuable additions to the crew and even teach the men a thing or two about running a ship. On the other hand, why should they have to prove themselves to the men at all?

I have terribly mixed feelings about all of this, both the content of the film and my reaction to it. I don't want to be a person who judges old movies by modern social standards that were simply different at the time. Audiences of 1959, both male and female, enthusiastically embraced Operation Petticoat. Men enjoyed the wartime adventure and naval hijinks. Women responded to the romantic fantasy of falling in love with a handsome and charming man in even the unlikeliest of circumstances. Who am I, a viewer in 2017 (and a man at that) to tell them that they were wrong?

What's more, who's to say that our view of the film won't change again over time, when the current climate eventually calms down and some form of normalcy (for better or worse) replaces it? Will some reader stumble across this review in twenty years and think I sounded ridiculous for fretting about all of this? Will I? Perhaps. I'm sure some of you out there feel that way right now.

As a reviewer, all I can do is offer my honest reaction to the experience of watching a movie. I still appreciate much of Operation Petticoat and value it highly overall. Its strengths greatly outweigh its weaknesses, and even those weaknesses are tame compared to other popular movies of its day. (Although oft ignored, James Bond basically rapes a woman at the beginning of 1965's Thunderball.) All the same, I have to acknowledge that some parts of the movie made me cringe this time around. Let's see how I feel about it in another few years.

Olive Films previously released Operation Petticoat on Blu-ray back in 2014 with a disc that I rated poorly on all technical levels and had zero bonus features. Three years on, the label has seen fit to reissue the movie as part of its premium Olive Signature line. To justify the double dip and $39.95 MSRP, the disc promises an improved video transfer and newly commissioned extras. One of these two things is true.

The Olive Signature edition comes packaged in a clear keepcase inside a slipcover. An included booklet reprints an essay also found on the disc itself.

The 2014 Blu-ray edition of Operation Petticoat was sourced from ratty film elements that looked like they'd been dragged across a gravel road before being scanned. The packaging for the new Olive Signature reissue boasts of a "New High-Definition digital restoration." Given that claim and the high MSRP, one might assume that Olive has either performed or licensed a new video master from a superior source. Unfortunately, no. This is clearly the same poor master with a small amount of new digital tinkering applied.

The 1080p/AVC MPEG-4 image still suffers dirt, scratches and other very distracting damage throughout. If Olive (or Paramount, the content owner) has attempted any sort of digital clean-up for these issues, I couldn't tell. I was able to match up frames from both copies with the exact same scratches in the same locations. In addition to that, the picture is frequently swamped in nasty, heavy grain. Edge enhancement ringing is present in a number of scenes (fortunately not all), most noticeably in the movie's opening sequence. All in all, it looks pretty lousy. 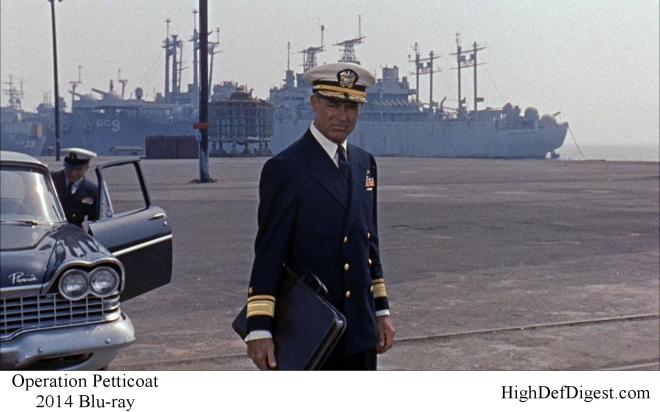 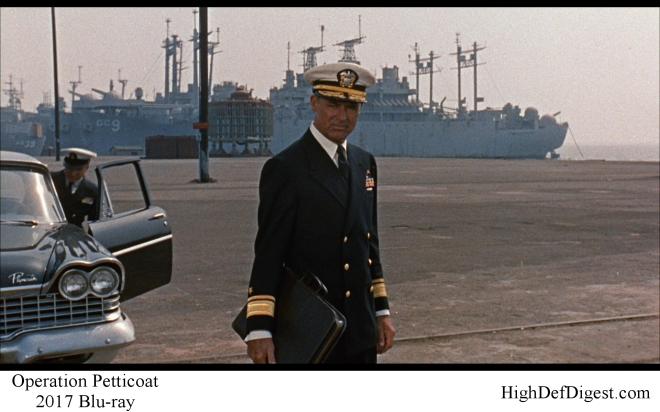 The two Blu-rays are only slightly different. The 2014 copy was an open-matte transfer framed at a screen-filling 16:9 ratio. The Olive Signature version adds small letterbox bars to the top and bottom to bring the ratio to the theatrical 1.85:1. The image is just a smidge darker, and colors have been tweaked a bit. I doubt I ever would have noticed without a side-by-side comparison, but the old disc had a very minor blue tinge that has been removed or corrected here. I suppose these are all improvements, but they're incredibly small improvements, while the biggest problems with the master remain untouched.

Of its few positive attributes, the transfer generally has a decent amount of detail unmolested by Digital Noise Reduction. Black levels and contrast are pretty good. Scenes that were fortunate enough to skirt by without too much film damage look adequately watchable. I just wish the disc had more than a handful like that. 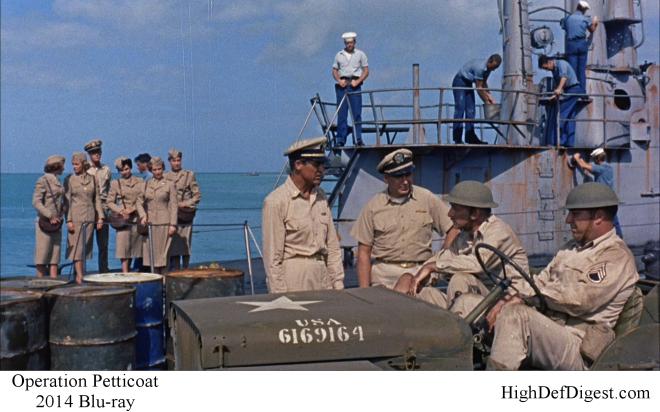 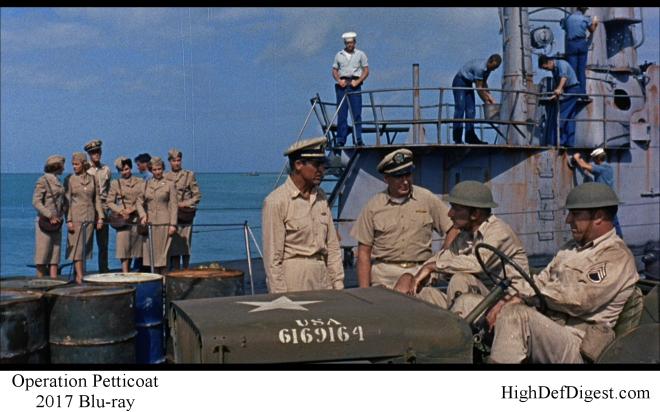 As far as I can tell, the soundtrack on the Olive Signature Blu-ray is the same DTS-HD Master Audio mono track from the 2014 disc. The sound quality remains undistinguished. While dialogue is clear and robust enough, it slips out of sync for a good stretch during the middle of the movie. The musical score by David Rose and an uncredited Henry Mancini is thin and bright. Sound effects such as machine guns and explosions are extremely dull.

The disc is watchable despite these flaws, but I have no doubt that it could sound better with more care and effort.

All of the bonus features on the Olive Signature disc are new and exclusive to the Blu-ray. Considering that no previous DVD or Blu-ray edition of Operation Petticoat ever came with any extras, the new content that Olive produced for this edition is pretty impressive, and certainly the disc's only real selling point. 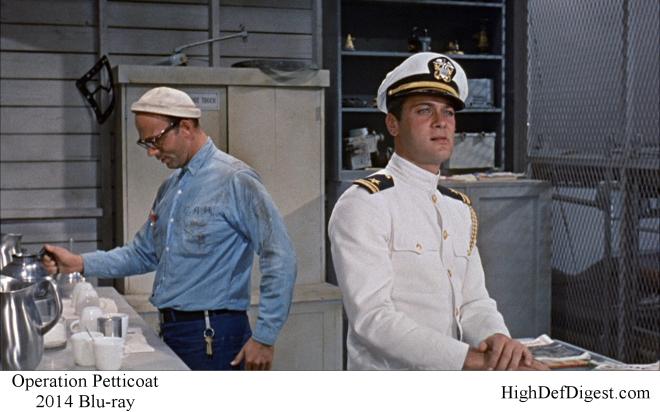 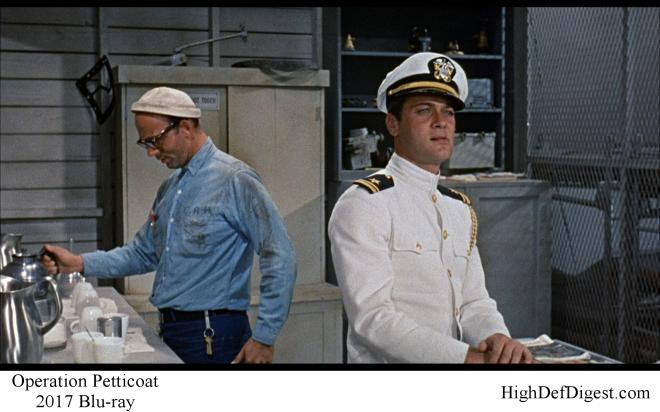 In terms of its sexual politics, Blake Edwards' 1959 hit Operation Petticoat has not aged particularly well, and some viewers may find aspects of it uncomfortable to watch today. Even as far as that goes, however, the film's problems are pretty tame. For the most part, it's still a delightful bit of entertainment.

Unfortunately, despite two tries, Olive Films just can't seem to do right by this movie. The new Olive Signature edition recycles the same crummy video transfer that looked awful when it first appeared on Blu-ray back in 2014, with only inconsequential tweaks. The disc is only worth owning for its new bonus features, but even those can't justify the premium pricing on their own.