The name John Frankenheimer became forever synonymous with heart-in-the-throat filmmaking when this quintessential sixties political thriller was released. Set in the early fifties, this razor-sharp adaptation of the novel by Richard Condon concerns the decorated U.S. Army sergeant Raymond Shaw (Laurence Harvey), who as a prisoner during the Korean War is brainwashed into being a sleeper assassin in a Communist conspiracy, and a fellow POW(Frank Sinatra) who slowly uncovers the sinister plot. In an unforgettable, Oscar-nominated performance, Angela Lansbury plays Raymond’s villainous mother, the controlling wife of a witch-hunting anti-Communist senator with his eyes on the White House. The rare film to be suffused with Cold War paranoia while also taking aim at the frenzy of the McCarthy era, The Manchurian Candidate remains potent, shocking American moviemaking.

The early 1960s spawned several top-notch Cold War paranoia films - 'Fail-Safe,' 'Seven Days in May,' 'Dr. Strangelove or: How I Learned to Stop Worrying and Love the Bomb' - but the granddaddy of them all is 'The Manchurian Candidate.' Director John Frankenheimer's mesmerizing adaptation of Richard Condon's novel brilliantly captures the fear and anxiety that gripped America during that fateful period by painting a portrait of evil so insidious and ruthless it could topple our government and change the face of our nation. Far-fetched yet disturbingly plausible, the movie taps into our inherent mistrust of our political system and feeds off of it, heightening and confirming many of our suspicions. It also remains surprisingly relevant, especially during this wild and crazy election year, in which figures like Donald Trump spout the same kind of inflammatory rhetoric as some of Condon's characters and mirror their demagogic traits.

But forget the messages and themes. 'The Manchurian Candidate' is first and foremost a damn good movie - taut, tense, intelligent, intricate, and laced with an underlying, biting humor that brings the action down to earth and makes the story scarier. Frankenheimer casts a - pardon the pun - hypnotic spell, combining captivating drama with comedic accents and an eerie sense of surrealism to create an off-kilter, unpredictable world where no one can be trusted, everyone's motives are questionable, and anything seems possible. His exhilarating technique, distinguished by 360-degree shots, changes in perspective, extreme close-ups, and the creative use of TV monitors, keeps the eye transfixed and perfectly complements Condon's tangled tale of human conditioning, political skullduggery, and twisted relationships.

Any type of detailed plot analysis would ruin this tightly wound exercise in shock and awe, so I'll only provide a skeletal outline here. The film opens during a Korean War skirmish in 1952, and depicts the ambush of an American army company by North Korean forces. The captured soldiers are brought behind enemy lines, where they're systematically brainwashed during an intense three-day period by Communist operatives who use Pavlovian methods to control the minds and manipulate the actions of these unwitting prisoners.

Staff Sergeant Raymond Shaw (Laurence Harvey) responds particularly well to the conditioning. Groomed to be "police proof" and immune to the "uniquely American symptoms" of guilt and fear, he becomes a robotized puppet for the Communists once he returns home to the bosom of his dysfunctional family, led by his domineering, outspoken mother, Eleanor (Angela Lansbury), and milquetoast stepfather, U.S. Senator John Iselin (James Gregory), who himself is a puppet of both the anti-Communist far right and his rabid, often shrill, and always controlling wife. Eleanor reviles Communists and seeks to swat them down with the same vehemence as she would a swarm of pesky flies, and hopes to propel her doltish husband into the political realm's upper echelons by making him the mouthpiece for the platform.

As Shaw begins to execute a series of violent directives (the game of solitaire triggers his conditioned behavior), his military cohorts, many of whom are plagued by horrific flashback nightmares, inform the Army of their experiences in captivity. Captain Bennett Marco (Frank Sinatra) leads the charge, and after some initial reticence, the intelligence wing green-lights an investigation into what drives Shaw's behavior and what - if anything - can be done to stop it.

Truth is often stranger than fiction, and fiction often predicts truths to come...and 'The Manchurian Candidate' reflects both sides of that coin. Produced at the height of the Cuban Missile Crisis when Americans most feared their Soviet foes, 'The Manchurian Candidate' wore its topicality on its sleeve, capitalizing on the paranoia preying upon the public and funneling it into a frightful scenario. The brainwashing depicted in the film may seem outlandish, but the North Koreans actually conducted such mind-altering experiments on POWs during the Korean War with varying degrees of success. (A fascinating featurette on the subject is included in the disc's supplements and is reviewed below.) Many have opined the movie inspired Lee Harvey Oswald to shoot President John F. Kennedy (or at least gave him an idea of how to do it), and one can't help but connect the climactic wheeling and dealing at the Republican National Convention with subsequent political skirmishes and what very well may transpire at this year's GOP conclave in Cleveland. (While the parallels between Senator Iselin and Senator Joseph McCarthy are obvious and intentional, the similarities between Iselin and Donald Trump are even more stunning.)

Frankenheimer's superior direction and George Axelrod's masterful script elevate 'The Manchurian Candidate' to a rarefied cinematic plane, but without the riveting, finely etched performances of Sinatra, Harvey, Lansbury, and Janet Leigh, whose understated portrayal of Marco's mysterious love interest often recalls Eva Marie Saint's Eve Kendall in Hitchcock's 'North by Northwest,' the film wouldn't be nearly as successful or entertaining. Sinatra contributes arguably his best work, eclipsing his Oscar-winning turn in 'From Here to Eternity' and searing take on a recovering heroin addict in 'The Man With the Golden Arm,' while Harvey's icy reserve has never been exploited to better advantage. Harvey's cold gaze and stiff demeanor suit Shaw well, and yet he still manages to engender sympathy for a man whose life is irrevocably altered and whose brutal actions are beyond his control.

Lansbury, however, steals the show, crafting a bravura performance that was justly rewarded with a Best Supporting Actress Oscar nomination. (She lost to Patty Duke's Helen Keller in 'The Miracle Worker.') Rarely has villainy been portrayed so convincingly or with such calculated precision, making it impossible to concentrate on anyone else while she's on screen. Despite the fact she was only three years older than Harvey, their relationship as mother and son is utterly believable, and their interchanges crackle with tension. Eleanor is a part that easily could have been overplayed and transformed into a caricature, but Lansbury embraces and nails every nasty element, even outshining the magnificent Meryl Streep, who gamely tackled Eleanor in the 2004 remake.

Deliciously chilling and superbly crafted, 'The Manchurian Candidate' remains one of the all-time great political thrillers, and it plays just as well today as it did more than 50 years ago. Combining potent themes with an edge-of-the-seat story and episodes of shocking violence, Frankenheimer's film grabs us from the opening frames and never relinquishes its grip. It's a fascinating, visceral experience and required viewing for anyone who loves movies. 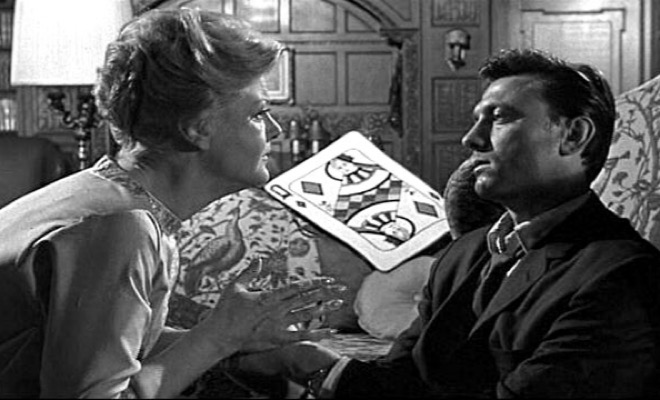 The 1962 version of The Manchurian Candidate' arrives on Blu-ray packaged in a standard Criterion case. A 16-page fold-out booklet featuring an essay by Howard Hampton, cast and crew listings, and transfer notes is tucked inside the front cover. (Though some striking artwork adorns the insert, sadly no photographs from the film are included.) Video codec is 1080p/AVC MPEG-4 and audio is LPCM mono. Once the disc is inserted into the player, the static menu with music immediately pops up; no previews or promos precede it.

According to the liner notes, "'The Manchurian Candidate' is presented in director John Frankenheimer's preferred aspect ration of 1.75:1...This new digital transfer was created in 4K resolution...from the 35 mm original camera negative. A previous video transfer supervised by Frankenheimer was used as a reference for the new transfer." And what a beautiful rendering it is! Clear, well-defined, and sporting terrific gray scale variance and a marvelous sense of depth, this 1080p/AVC MPEG-4 transfer instantly immerses us in the action and doesn't relinquish its grip until the last moment. Minimal grain complements the story's sterility, and perfectly pitched contrast heightens the impact of Frankenheimer's stunning technique. Blacks are rich and deep, whites are bright but never bloom, and location exteriors exude a gritty realism that fuels the narrative's drive. Close-ups are particularly striking, highlighting beads of sweat, facial blemishes, stubble, and the natural glamour of Janet Leigh. Background elements are easy to discern, excellent shadow delineation keeps crush at bay, and no nicks or scratches sully the pristine source material. No noise intrudes, and any digital doctoring escapes notice. This is a wonderfully organic transfer from Criterion that honors Frankenheimer's vision and will certainly thrill the film's legion of devoted fans.

The LPCM mono track was "remastered at 24-bit from the original 35 mm optical soundtrack negative," and the results are quite good. Excellent fidelity and tonal depth distinguish the audio, which is free of any age-related imperfections, such as hiss, pops, and crackles. Ambient effects blend seamlessly into the whole, and accents like fisticuffs, gunfire, and shattering glass are crisp and distinct. A wide dynamic scale embraces all the highs and lows of David Amram's music score, which fills the room with ease but never overwhelms the action, and most of the dialogue is clear and easy to comprehend. (A few lines are unintelligible, but that's due more to the actors' delivery than any soundtrack defect.) No distortion creeps into the mix and no jarring level changes disrupt the movie's magnetic flow. Though not spectacular, this track complements the visuals well and rarely calls attention to itself, allowing the story to speak for itself.

Though not packed with extras, this Criterion Blu-ray release features an array of interesting supplements that shed additional light on this fascinating film. Some, but not all, of the material from the previous Blu-ray edition has been ported over, and is augmented by new interviews conducted expressly for this release.

One of the all-time great Cold War thrillers, the original 1962 version of 'The Manchurian Candidate' is a riveting film experience from beginning to end. Tense, violent, and endlessly fascinating, this twisty and twisted story of a brainwashed American POW who's transformed by his Communist captors into a cold-blooded, mechanical assassin is flawlessly directed by John Frankenheimer and impeccably acted by Frank Sinatra, Laurence Harvey, Janet Leigh, and especially Angela Lansbury, whose brilliantly crafted portrait of a monstrous mother makes Mrs. Bates from 'Psycho' seem like a pussycat. Criterion's Blu-ray presentation features high-quality video and audio transfers, as well as a fine array of supplemental material. Few 50-year-old films still possess the power to shock and dismay, but 'The Manchurian Candidate' continually takes our collective breath away and remains surprisingly relevant and topical. This film deserves a prominent spot on every movie-lover's shelf and is a highly recommended, must-own release.

Sale Price 27.1
List Price 39.95
Buy Now
3rd Party 21.95
In Stock.
See what people are saying about this story or others
See Comments in Forum
Previous Next
Pre-Orders
Tomorrow's latest releases