One of Audrey Hepburn's most beloved films at last arrives on Blu-ray, and it's worth the wait. Roman Holiday follows the adventures of a wayward princess desperate to experience life's simple pleasures, yet little does she know her dashing American travel guide (Gregory Peck) is also a hungry reporter who has stumbled upon the scoop of the century. A meticulous 2015 4K restoration revitalizes director William Wyler's delightful confection and yields fantastic video and audio transfers. A fine spate of supplements sweetens this welcome release, which celebrates everything we love about the always adorable Audrey and comes very highly recommended.

Cinderella tales have long been a popular Hollywood mini-genre. Who doesn't get the warm fuzzies watching a beleaguered princess kick up her heels and experience life's simple pleasures or see a struggling everywoman win the love of a bona fide Prince Charming and find her personal happily ever after? When done right, Cinderella movies can uplift audiences and send them sailing home on air, and that's exactly what esteemed director William Wyler accomplishes with arguably the best of these romantic confections, his all-time classic Roman Holiday.

Shot entirely on location in Italy's capitol city with a light touch and plenty of artistic flair, Roman Holiday is just that, a delightful piece of escapist fare that takes us overseas and immerses us in the sights, sounds, culture, history, hubbub, and infectious joie de vivre of the Eternal City. Wyler makes Rome a vital character in his warm, wonderful rom-com, but even the allure of the Colosseum, Pantheon, and Trevi Fountain can't eclipse the beauty of the film's iridescent star, Audrey Hepburn.

Hepburn is the quintessential Cinderella - fresh-faced, wide-eyed, natural, impressionable, and bursting with energy and warmth. No one can light up a screen like Audrey, and even in black-and-white she sets the canvas ablaze. It's tough to believe, but Roman Holiday marked Hepburn's first leading role and American film debut, yet this pert, beguiling 24-year-old exudes such poise, confidence, and blissful serenity, anyone who doesn't know better would think she'd been a pro for years. Fittingly, her Best Actress Oscar win would provide the adorable Audrey with a Cinderella ending to the opening chapter of a career that would scale many heights over the next three decades. 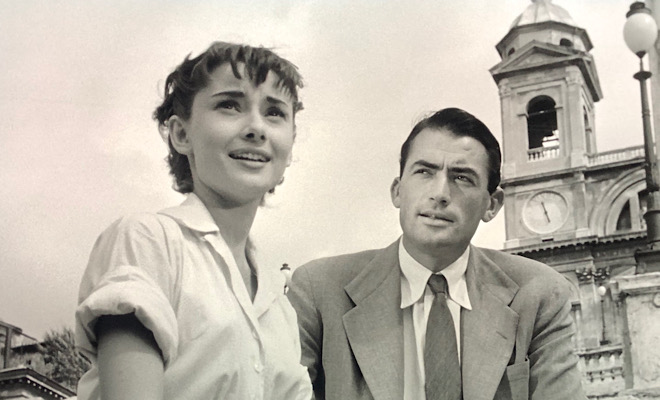 Roman Holiday breezily chronicles the coming of age of Princess Ann (Hepburn), a young royal from a fictional country who has become fed up with her stifling, rigidly scheduled, micro-managed life. Sick and tired of being told what to wear and where to go and who to see and what to say and having her every gesture and remark scrutinized, Ann decides to go AWOL on a whim while on a goodwill tour of Rome. She escapes the secure confines of her diplomatic abode and quite by chance encounters Joe Bradley (Gregory Peck), a somewhat irresponsible American newspaper reporter who doesn't recognize her in plain clothes.

Loopy from the effects of a sedative injection given to calm her frayed nerves, Ann allows Joe to take her to his apartment so she can get some rest. The next morning, after seeing the headlines heralding her disappearance, Joe realizes he has the scoop of the century right under his nose, and with the help of his loyal photographer Irving (Eddie Albert), he manipulates Ann into spending what turns out to be a very memorable day with him...a day he plans to detail in a splashy, revealing newspaper story. Yet what Joe doesn't realize is how attached he will become to this misunderstood, vivacious, utterly charming princess after all their adventures conclude, and how attracted she will be to her strapping escort. Though their story might not have a fairy tale ending, both will grow from having known the other.

Wyler strikes just the right tone, alternating comic sequences with slice-of-life vignettes and heartwarming exchanges, and he peppers it all with a hefty sprinkling of Italian flavor. He seamlessly incorporates all the top Roman tourist sites into his tale, but despite the grandeur of the Colosseum, Trevi Fountain, and Roman Forum, it's the modest Mouth of Truth that makes the biggest impression and generates a classic movie moment. (When I finally got the chance to visit Rome in 2018, the Mouth of Truth was a must-see landmark for me, not because of its historical significance, but because of its iconic appearance in Roman Holiday.)

Character always comes first with Wyler, and his assured, nuanced direction wonderfully highlights the unaffected, winning personalities of Peck and especially Hepburn. The chemistry between the two is magical, and Peck graciously yields the spotlight to Audrey in virtually all their scenes together. His low-key work is easy to ignore when compared to Hepburn's brilliance, but Peck remains a magnetic presence, and the film wouldn't be nearly as good without his participation. Albert is terrific, too, bringing vim, vigor, and charm galore to his second banana role that earned him a well-deserved Best Supporting Actor Oscar nomination.

Roman Holiday's marvelous, textured script was co-written by legendary screenwriter Dalton Trumbo, who also supplied the original story. Trumbo, of course, was famously blacklisted after he refused to name names before the House UnAmerican Activities Committee. (He also served several months in prison for contempt of Congress.) Unable to work legitimately, Trumbo toiled in secret, churning out screenplays that would never bear his name. Writer Ian McLellan Hunter "fronted" for Trumbo on Roman Holiday, and even received the Best Writing, Motion Picture Story Oscar that Trumbo's original story won. In 1993, the Academy finally gave Trumbo, albeit posthumously, his Oscar, and this Blu-ray edition of Roman Holiday at last restores both his screen credits.

In all, Roman Holiday would win three Oscars (Edith Head also took home the prize for her costume designs) and earn nominations for Best Picture, Director, Supporting Actor, Screenplay, Cinematography, Art Direction-Set Decoration, and Editing. And yet despite all that craftsmanship and the greatness of such Hollywood heavyweights as Wyler, Peck, and Trumbo, Roman Holiday is all about Audrey, the bright-eyed, wispy waif with the megawatt smile and bountiful beauty, warmth, and irrepressible charm. Audrey is authentic, and she lends Roman Holiday both a buoyancy and gravity that make it timeless. It doesn't matter if you're a man or a woman, you can't watch this movie without falling hopelessly in love with her. Here, she out-Cinderellas Cinderella, and does it without the help of a fairy godmother. She may play a princess in Roman Holiday, but forever after Audrey Hepburn would be bona fide Hollywood royalty. 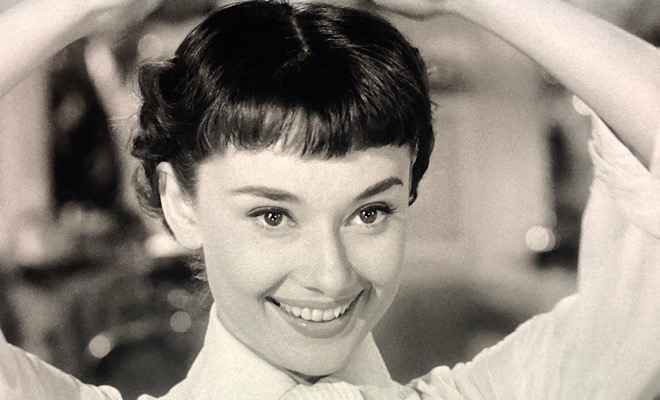 Roman Holiday at last arrives on Blu-ray packaged in a clear case inside a sleeve with a fold-out flap that reveals a new poster rendering of the film. A leaflet containing the code to access a digital copy of Roman Holiday is tucked inside the front cover. Video codec is 1080p/AVC MPEG-4 and audio is DTS-HD Master Audio mono. Once the disc is inserted into the player, the static menu with music immediately pops up; no previews or promos precede it.

An extensive 2015 4K restoration yields a truly remarkable 1080p/AVC MPEG-4 transfer that makes Roman Holiday look sharper, cleaner, and more vibrant than ever before. Because the film's original nitrate negative no longer exists, Paramount used the best existing sources - a 35 mm dupe negative and fine grain print - for this restoration, and the technicians' painstaking work has produced impressive results. (For a more detailed account of the Roman Holiday restoration, including before-and-after photos, click here.)

Grain is evident, lending the image a lovely film-like feel, but it never intrudes. Both exterior and interior sequences flaunt a balanced look, thanks to rich blacks, bright yet stable whites, and beautifully varied grays. Excellent contrast and clarity enhance depth and highlight the opulence of the early ceremonial scenes. (Detail levels are so high, it's easy to spot the doubles of Hepburn and Peck riding the Vespa in long shots.) Costume and linen textures are vivid, fine details in sculpture and wallpaper patterns are easy to discern, superior shadow delineation keeps crush at bay (most of the time), and breathtaking close-ups showcase Hepburn's fresh-faced beauty and Peck's rugged complexion. Some scenes look softer than others, but that's undoubtedly due to the less-than-optimal sources available. Amazingly, not a single blemish mars this restored print...quite a feat considering the level of deterioration that previously plagued this film.

Preserving our film heritage is essential, so well-deserved kudos go to Paramount for bringing Roman Holiday back to life in such glorious fashion. Anyone who loves classic movies, and Hepburn fans in particular, will be thrilled with this stunning presentation.

The remastered Dolby TrueHD mono track ably renders all of Rome's hustle and bustle with clarity and nuance. The subtle hum of the cityscape, the rough rattling of the Vespa engines, the slight echo in the enclave around the Mouth of Truth, blaring police sirens, and all the fisticuffs in the brawl scene are crisp and distinct. A wide dynamic scale allows the majestic and romantic music score by Georges Auric plenty of room to breathe, and all the dialogue is nicely prioritized and easy to comprehend. Best of all, no distortion or age-related hiss, pops, or crackle intrude. Audio doesn't play a huge role in the film, but this fine track asserts itself when it needs to.

All the extras from the 2008 DVD have been ported over to this release. There's only one new extra - a brief ode to Roman Holiday from film historian Leonard Maltin - and sadly no featurette chronicling the film's impressive restoration.

There are princess movies, and then there's Roman Holiday. Part romantic comedy, part travelogue, part coming-of-age tale, and 100% delightful, Audrey Hepburn's American film debut showcases everything we love about this beautiful, captivating screen legend. Director William Wyler celebrates both Rome and his leading lady in this frothy confection about a rebellious princess who abandons her duties to enjoy the city's simple pleasures with a dashing American who is also - unbeknownst to her - a newspaper reporter primed to get the scoop of a lifetime. At last available on Blu-ray, Roman Holiday looks better than ever, thanks to a painstaking 2015 4K restoration that has yielded marvelous video and audio transfers. Plenty of extras sweeten this release of one of Hepburn's most iconic films, which comes very highly recommended.