Porter Wren is a Manhattan tabloid writer with an appetite for scandal. On the beat he sells murder, tragedy, and anything that passes for the truth. At home, he is a dedicated husband and father. But when Caroline, a seductive stranger asks him to dig into the unsolved murder of her filmmaker husband Simon, he is drawn into a very nasty case of sexual obsession and blackmail--one that threatens his job, his marriage, and his life.

I review a lot of classic film noir titles for High-Def Digest, so I have great respect for the genre. And though I can empathize with contemporary directors whose affection for superior 1940s and '50s noirs like 'Double Indemnity,' 'The Big Sleep,' 'Out of the Past,' and 'The Big Heat' inspires them to emulate this seductive style of filmmaking, I wish they would leave well enough alone.

True film noirs flaunt a unique photographic style, but more importantly, belong to a specific time and place. Most provide a snapshot of an era and connect with a social mindset of alienation and paranoia that fuels the gritty stories. While a couple of brilliant modern homages - Lawrence Kasdan's 'Body Heat' and especially Curtis Hanson's 'L.A. Confidential' - dazzlingly evoke the tone and look of classic noir, most of today's copycat noirs feel as if they take place in an alternate universe that bears little resemblance to our current day and age. They're often stilted and stylized, brim with artifice, and lack the sting and artistry of their iconic predecessors.

'Manhattan Night' is one of those films. Brian DeCubellis' adaptation of Colin Harrison's acclaimed novel tries hard, but remains maddeningly inauthentic and never rises above "pale imitation" status. Though it often walks the walk of film noir, featuring such standard elements as cynical, unemotional narration, a gorgeous femme fatale, and a seemingly innocuous mystery that balloons into a tangled web of tawdry intrigue, this by-the-numbers thriller lacks the hard-boiled brand of elegance and poetry that help define the genre. The best noirs build like a symphony to a thrilling and cathartic crescendo of mayhem, despair, and retribution, but 'Manhattan Night' wallows in a sea of exploitative sleaze, and eventually drowns in its own muck.

New York newspaper columnist Porter Wren (Adrien Brody) is "always looking for a good story," but in the age of expanding digital media he believes himself to be an "endangered species." Grungy and unkempt (does this guy ever wash his hair?), Porter combs Manhattan streets, championing the downtrodden and investigating crimes the police have ignored. At a posh party for his paper's new owner, a portly, Trump-like magnate named Hobbs (Steven Berkoff), he encounters Caroline Crowley (Yvonne Strahovski), a smoky blonde siren who hopes Porter can uncover key clues in the unsolved death of her husband, noted film director Simon Crowley (Campbell Scott), and recover the remains of a broken jade statuette (can you say 'Maltese Falcon'?). Porter resists at first, but his chronic sexual frustration - due to his hectic family life with wife Lisa (Jennifer Beals) and two young kids - leads him into Caroline's web and bed. And so begins a torrid affair and methodical march into an abyss of mystery that yields one shocking revelation after another.

'Manhattan Night' has noir potential to burn, but several missteps drag it down. Bland photography lends the film a sterile look that keeps the story at arm's length, and DeCubellis fails to maximize his rich location. Though it was shot in New York, 'Manhattan Night' exudes little Big Apple flavor, thus relegating what should be one of the drama's major characters to bit player status and robbing the movie of essential atmosphere. More importantly, the twisted plot unravels too easily and is punctuated by outrageous and often inane events that strain credulity and dull its impact. The cardboard characters move about like puppets on a predictable path toward self-destruction, with questionable motivations fueling their desires and actions.

Worst of all, so much of the story is designed to shock, disgust, and titillate without any underlying point. The grotesque components continually pile up, resulting in a distasteful mélange of kinky sex, sadomasochistic mind games, and shameless exploitation that completely detaches the tale from reality and alienates its audience. Sure, noir films often transpire in a foreign underworld where corruption, illicit sex, and ruthless power plays rule supreme, but the kitchen sink approach of 'Manhattan Night' bathes us in filth for no apparent reason.

The acting, however, is the picture's saving grace, despite a script that favors graphic displays of sex and violence over innuendo and nuance. (Do we really need a scene of Caroline pleasuring herself in the shower? DePalma did that in 'Dressed in Kill,' but at least it served a purpose.) Though at first glance Brody seems an odd choice to play the hapless Porter, he nicely fits the everyman profile, and his angular features and hollow eyes complement his brooding portrait of longing, fear, and disillusionment. He and the beautiful Strahovski (who reminds me of a young Jessica Lange) create a steamy chemistry that serves the story well, but his tough guy moments don't ring true. Scott is appropriately creepy as the deranged douchebag who proposes to Caroline minutes after meeting her and proceeds to make her life a living hell, and Beals makes a stronger than usual impression as Porter's deceived and put-upon wife.

Though the film takes a few incisive swipes at our digitally obsessed society and the underlying narcissism and voyeurism that drive it, it's really just an unfocused hodgepodge of noir clichés spiced up by hefty helpings of crude sex and violence. I thought (and hoped) 'Manhattan Night' would be different than other uninspired - and decidedly mediocre - contemporary noirs. Silly me. Like many male noir heroes who turn out to be gullible saps, I was duped. 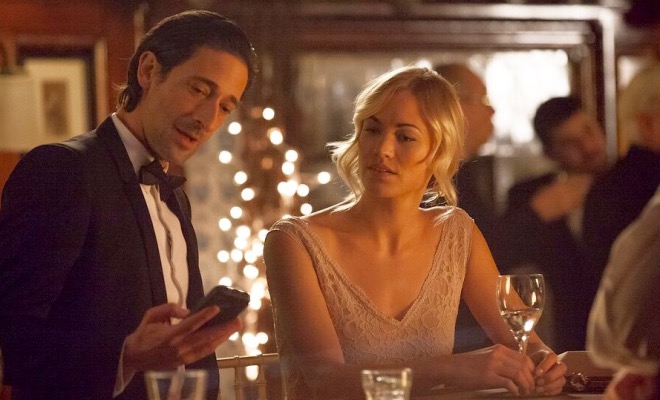 'Manhattan Night' arrives on Blu-ray packaged in a standard case inside a sleeve. A leaflet containing the Digital HD Ultraviolet code is tucked inside the front cover. Video codec is 1080p/AVC MPEG-4 and audio is DTS-HD Master Audio 5.1. Once the disc is inserted into the player, a bunch of one-word titled previews - 'Misconduct,' 'Criminal,' 'Exposed,' 'Heist,' and 'Backtrack' - precede the full-motion menu with music.

Color film noirs don't flaunt the striking contrast and stark lighting of their black-and-white counterparts, often preferring a drab, naturalistic palette instead. And 'Manhattan Night' snugly fits that profile. Grays predominate and aptly reflect the desolation of a wintry New York, while a desaturated look mirrors the desperation and angst that fuel the characters. And yet Strahovski is always photographed very warmly, with an almost angelic glow swirling about her. Black levels exude a pleasing depth, whites are crisp, and flesh tones remain natural and stable throughout. A few instances of crush crop up, but shadow delineation is generally good, background elements are easy to discern, and close-ups nicely highlight Brody's omnipresent stubble and Strahovski's beauty. No nicks or marks dot the pristine source material, and the various film stocks employed maintain their integrity while exhibiting solid clarity. No banding or noise is evident, and no digital enhancements disrupt the smooth presentation, which doesn't dazzle, but is pleasing  to view.

The DTS-HD Master Audio 5.1 track supplies clear, balanced sound that handles all the subtle nuances like whispered asides and atmospheric rain quite well. Though surround effects are faint at best, some decent stereo separation up front widens the soundscape, and expansive dynamic range gives the track freedom to breathe without any hints of distortion. Bass frequencies are especially strong, providing an ominous weightiness that enhances the story's dark mood, while superior fidelity and tonal depth distinguish the elegant music score. All the dialogue is easy to comprehend, and no imperfections disrupt the purity of the mix. The gritty aura of the city doesn't come through as distinctly as we'd like, but all in all, this is a solid track that complements the narrative well.

A fair amount of extras enhance this Blu-ray release.

It takes a special touch to create a modern film noir, but unfortunately, 'Manhattan Night' doesn't have it. Although writer-director-producer Brian DeCubellis possesses obvious affection for the genre and tries his best to craft a moody, gritty thriller, the tawdry nature of the tale and its salacious presentation drag what should be an elegant homage into the muck. Plot holes abound and the stylized screenplay often sounds pretentious and affected, which only makes us yearn for the classic noir films of yore. Lionsgate's Blu-ray presentation features solid video and audio transfers, as well as a meaty supplemental package, but such attributes and an array of good performances can't salvage this sleazy yarn that serious film fans should skip.

Sale Price 12.02
List Price 19.99
Buy Now
3rd Party 4.2
In Stock.
See what people are saying about this story or others
See Comments in Forum
Previous Next
Pre-Orders
Tomorrow's latest releases