When an ambitious lawyer (Josh Duhamel) is seduced by his ex-girlfriend (Malin Akerman) and presented with evidence incriminating a corrupt pharmaceutical executive that she works for, he finds himself caught in a power struggle between the pharmaceutical magnate (Anthony Hopkins) and his firm's senior partner (Al Pacino). When the case takes a deadly turn, he must race to uncover the truth before he loses not only his wife, but his career, and possibly his own life.

When you sit down to a new movie, and the plot starts to get rolling, do you ever feel like you've already seen what you're watching and get that intense sense of deja vu? It can be really frustrating because you're trying to experience something new for its own merits and yet your brain keeps going "I saw that in this movie," or "I saw that already in that movie." It isn't that the film you're seeing isn't something original, but the similar plot threads inevitably force your headcheese to ruin the experience of the new film by constantly reminding you of great movies of yesteryear. I had that experience with Shintaro Shimosawa's 'Misconduct' starring Academy Award winners Al Pacino, Anthony Hopkins, and Josh Duhamel. A halfway decent movie undone by too many similarities to other films.

Ben Cahil (Josh Duhamel) is a bright, eager young lawyer who wins case after case logging over a hundred billable hours each and every week putting a lot of strain on his marriage to his wife Charlotte (Alice Eve). Charlotte is a nurse who also works frequent long double shifts and the pair rarely see each other. It's not that they don't love each other, they do, but after Charlotte lost the child she was carrying, the never really healed from the tragedy, so they threw themselves into work. When Ben's ex-girlfriend Emily (Malin Akerman) shows up, temptation to stray is already strong and his will is weak. Only Emily has sinister designs of her own.

It turns out that Emily has been going out with the billionaire pharmaceutical magnate Arthur Denning (Anthony Hopkins). In her time with him, she gained access to some pretty incriminating emails that could be useful for any lawyer looking to file a lucrative criminal case. Ben's boss Charles Abrams (Al Pacino) sees the chance to finally nail Arthur after several previous failed lawsuits and encourages Ben to pursue the evidence. As Ben builds a case, his newly reconnected relationship with Emily causes further strain and stress on his marriage, all the while a mysterious thug (Byung-Hun Lee) makes veiled threats. When Emily turns up murdered and her body found in Ben and Charlotte's home, Ben is forced to go on the run in order to clear his name and find out who set him up. 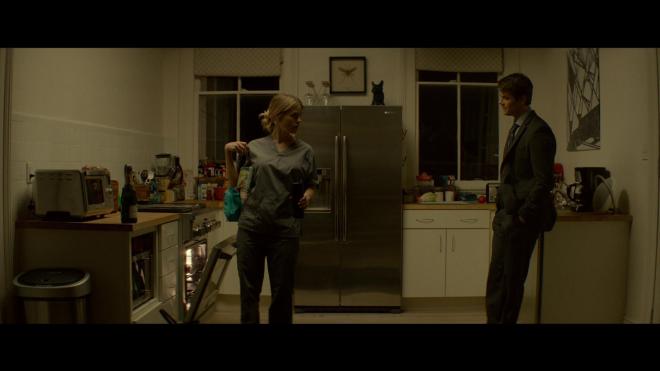 To be fair and honest, I wasn't expecting all that much from 'Misconduct' when I signed up to review it. I was just more interested in seeing Scarface and Hannibal Lecter share some screen time together. 'Misconduct' starts out on  an interesting note with Malin Akerman's Emily being kidnapped and Anthony Hopkins' Arthur Denning consulting with two kidnapping specialists played by Julia Stiles and Marcus Lyle Brown about how to pay the ransom. When the money drop goes wrong, the film backtracks a week and we catch up with Josh Duhamel's Ben as he's just won another case, but not exactly eager to get home and celebrate with his wife. All is well and good for the movie at this point, we have a tantalizing twist to look forward to, we met an ambitious lawyer who has a strained marriage so now we're on board for what should be an interesting ride. Then the movie starts borrowing plot point from other legal thrillers and steadily falls apart.

Like I said at the outset, it's difficult to stop your brain from drawing connections from a new film to past features that you've seen. In the case of 'Misconduct' it's hard not to do that when what you're watching is taking the best moments from movies like 'The Firm,' 'The Constant Gardener,' 'Presumed Innocent,' and 'Runaway Jury' just to name a few familiar-seeming movies. Where 'Misconduct' goes wrong is that it takes all of these great clever twists and plot tricks and smashes them together without any forethought as to how they may or may not work together. Just because one worked for one movie doesn't mean they'll all work in another. the screenplay by Adam Mason and Simon Boyes does a good job of keeping the movie and the action moving forward, but the frequent twists start to become contrivances rather than anything clever.

The shame of all the plot muddling is that there are some fairly decent performances throughout the movie. Pacino does his best to steal the show where he can and Hopkins delivers a nice amount of menace to the role. He's not full into his Hannibal Lecter role or anything, but he chews the scenery with the few scenes he's given. Duhamel does a solid job as Ben, but again, the number of twists and plot contrivances start to stretch his character's believability. However, the real standout of the show is Byung-Hun Lee as The Accountant. He's such an effective physical and mental threat for our leads that I wish he was given more screen time. Byung-Hun Lee's lack of screen time actually articulates the plot issues with 'Misconduct,' we don't really get to know how or why The Accountant works for who he does in an organic way. The only explanation we're given is a toss away series of brief flashbacks at the end that adds further weight to the notion the film just didn't know where it was going or how it was going to get there in a way that felt exciting and natural. 'Misconduct' is a diverting piece of entertainment, but it isn't very memorable considering the talented cast involved.

'Misconduct' arrives on Blu-ray thanks to Lionsgate Home Entertainment. Pressed onto a Region A locked BD25 disc, the disc opens with trailers for other Lionsgate releases before arriving at an animated main menu featuring traditional navigation options. Housed in an eco-friendly Blu-ray case, the disc also comes with a Digital HD Ultraviolet voucher.

'Misconduct' comes with a well detailed and stable 2.40:1 1080p transfer. Shot digitally, facial features, production design details, costuming and the New Orleans locations. Colors are even with the right amount of primary pop without interfering with flesh tones. There are a few moments where colors have been graded towards yellow and can make some of the actors look a little jaundiced at times, but that would appear to be by intent rather than a transfer issue. Black levels are rich and inky giving the image a nice three-dimensional feeling to it. Contrast seems even but there are a couple moments of bloom during an outdoor scene and some banding pops up from time to time. All around a good looking transfer.

'Misconduct' arrives with a strong DTS-HD MA 5.1 audio mix. The film is mostly conversational so dialogue comes through crisp and clear throughout. Surrounds are only subtly engaged using small atmospheric background elements and the score by Frederico Jusio to keep the sides and rear channels engaged. When the action picks up, the surrounds get a little more life and presence to them. Imaging is well used as there is a constant feeling of channel movement that gives the track a nice sense of space and dimension. Levels are well balanced as the track keeps to the midranges without any need to adjust the volume. All around a decent track for the type of movie this is, it won't blow your hair back but it'll get the job done.

The Making of Misconduct: (HD 15:08) This is pretty standard EPK material with the cast and crew explaining their characters. Basic stuff that isn't too informative.

'Misconduct' isn't exactly a bad movie, but it's one that tries entirely too hard to impress the audience with third act twists and tricks that it loses all believability and ends up being a lesser flick as a result. If you're curious it's worth looking at but I doubt this movie will win many praises. 'Misconduct' arrives on Blu-ray thanks to Lionsgate who gives this disc a pretty decent A/V presentation, but extra features lack any real weight or importance. At the end of the day, 'Misconduct' is a movie really only worth renting. A blind buy is a bit of a stretch.

Sale Price 20.2
List Price 24.99
Buy Now
3rd Party 2.93
In Stock.
See what people are saying about this story or others
See Comments in Forum
Previous Next
Pre-Orders
Tomorrow's latest releases