Fritz Lang may not be the father of film noir, but he's one of the genre's best-known craftsmen, directing an array of finely constructed thrillers that explore the dark side of both the human psyche and American society. At once gritty and artistic, exciting and meaningful, Lang's films exude a fascinating stylistic duality that mirrors the conflicting attitudes and loyalties of the characters that populate them. Nothing is black-and-white in Lang's world except the film stock he uses to document tales of moral complexity and human strength. And few stories brim with as much power, violence, and unbridled fury as 'The Big Heat,' which indisputably stands as one of his defining works.

On its surface, 'The Big Heat' looks like countless other low-budget crime dramas. Square-jawed cops, a ruthless mob kingpin, tough-talking dames, and macho thugs navigate a twisted web of police corruption, blackmail, murder, and revenge. But the devil (and "devil" is definitely the operative word here) is in the details, and that's where Lang's mastery shines through. Impeccable pacing, an uncompromising commitment to his characters, unvarnished cynicism, and a perfectly pitched mixture of toughness and heart add layers to the straightforward story that enhance its impact.

And impact is what 'The Big Heat' is all about. Several scenes shock and dismay, pushing the envelope of film violence and inciting visceral reactions. Yet without colorful characters and absorbing themes, such episodes would be gratuitous. Lang makes them matter, even ones that strain credulity, because he creates a heightened reality that's immediate and relatable. Contemporary viewers may find some of the events cliched, but it’s important to note ‘The Big Heat’ coined those moments that later would be repeatedly copied by other filmmakers.

The methodical suicide of police officer Tom Duncan opens the film, but what really draws us into the story is Lang’s spot-on depiction of the average, middle-class family life of Detective Sergeant Dave Bannion (Glenn Ford), who’s tapped to investigate the case. Dave’s understanding yet refreshingly plucky wife Katie (Jocelyn Brando, Marlon’s older sister) and cute-as-a-button daughter represent a striking contrast to the grimy underworld that will soon engulf and obsess Banning, and they provide a much-needed sanctuary for the tense, driven cop who often struggles to shake off the pressures of his stressful job.

Those pressures mount when the routine inquiry into Duncan’s death becomes more complex. Duncan’s widow (Jeanette Nolan) claims her husband was depressed, but his mistress (Dorothy Green) begs to differ, and when she winds up gruesomely whacked, Bannion suspects the local crime syndicate ordered the hit. The mob, which runs roughshod over the town and its police force, doesn’t like Bannion nosing around, and after some threatening phone calls traumatize his family, an indignant Bannion confronts and antagonizes Mike Lagana (Alexander Scourby), the gang’s slick and sleazy leader. That incites some devastating domestic violence at Bannion’s home, which in turn motivates the enraged detective to quit the force and seek personal revenge against the ruthless thugs that destroyed his idyllic world.

Lang, who fled Nazi Germany during the early years of Hitler’s regime, incisively explores insidious evil in ‘The Big Heat,’ and does so with uncompromising focus. Scenes of sadistic violence abound, and though most of the grisly events transpire either off screen or out of the frame, their devastating effects loom large. Women are especially targeted, but no one more fiercely than good-time mob moll Debby Marsh (Gloria Grahame), who, in the film’s most famous scene, is viciously attacked by her menacing boyfriend (Lee Marvin). Let’s just say you’ll never look at a percolating coffee pot the same way again after seeing this brutal scene, which still possesses substantial shock value today.

Ford shines in one of his best roles, projecting a seething ferocity that drives the narrative. His lack of bravado and inherent blandness work to his advantage here, lending him an attractive everyman quality that heightens the film’s realistic aura. Though Lang seemingly makes a clever inside joke by scoring a key Ford scene with ‘Put the Blame on Mame’ (honoring one of Ford’s biggest successes, ‘Gilda’), the song has tremendous underlying significance when regarded in the movie’s larger context - another terrific touch in a picture that brims with them.

Reportedly, Marilyn Monroe, whom Lang directed in the previous year’s ‘Clash by Night,’ was his original choice to portray Debby, but it’s almost impossible to imagine anyone other than Grahame in the part. Fresh from her Oscar-winning supporting turn in ‘The Bad and the Beautiful,’ Grahame evolves from a vivacious party girl into a vengeful vixen, and brings an affecting poignancy to her colorful performance. Marvin is magnetic in a breakout portrayal that brims with a delicious nastiness that recalls Richard  Widmark in ‘Kiss of Death,’ and eagle eyes will spot a bleached blonde Carolyn Jones (best known as Morticia in ‘The Addams Family’ TV series) as another abused woman.

‘The Big Heat’ wasn’t a particularly big deal when it premiered in 1953. Many considered it a run-of-the-mill crime drama, but upon reflection, its artistry, structure, pacing, and intriguing underlying themes set it apart from similar genre entries. Few films are as taut and economical, or bring the stylized world of noir down to a relatable level. Violence is everywhere, Lang tells us, often lurking outside our seemingly safe, suburban, middle-class doors. That’s what makes ‘The Big Heat’ so scary. But it’s Lang’s masterful, high-octane presentation that makes this tough thriller an electrifying and memorable film experience. 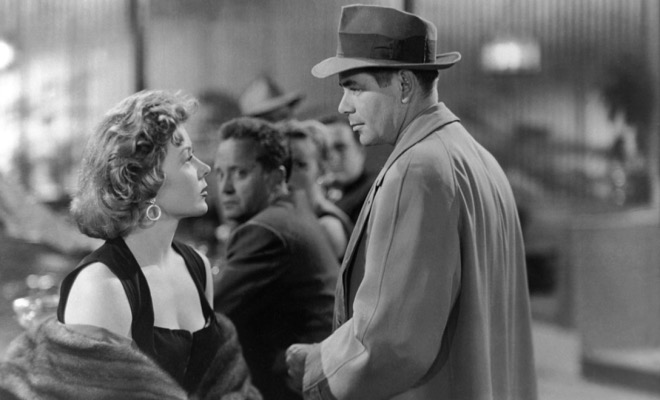 The Twilight Time reissue of 'The Big Heat' arrives on Blu-ray in a limited to 3,000 edition packaged in a standard case with all-new cover art. (I much preferred the previous cover art.) An eight-page booklet featuring an essay by film historian Julie Kirgo, several black-and-white scene shots, and a full-color reproduction of the movie's poster art is tucked inside the front cover. Video codec is 1080p/AVC MPEG-4 and audio is DTS-HD Master Audio 1.0. (Both the video and audio transfers are the exact same ones that graced the previous Twilight Time Blu-ray edition of 'The Big Heat.') Once the disc is inserted into the player, the static menu without music immediately pops up; no previews or promos precede it.

'The Big Heat' rarely looks like a typical film noir, but that doesn't diminish the artistry of Charles Lang's stark, realistic cinematography that's perfectly rendered in this high-quality 1080p/AVC MPEG-4 transfer. Clarity is excellent, but contrast is intentionally muted, lending the image a harsh, semi-documentary appearance. Black levels are strong, but grays predominate, casting a slight monochromatic sheen over the picture that's quite striking. There's not a lot of depth on display, but background elements are well-defined, shadow delineation is good, and close-ups show off fine facial details well (a little too well in Grahame's case). No nicks, marks, or scratches dot the pristine source material, and just the right amount of grain supplies essential texture while maintaining the feel of celluloid. Not a lot of money was spent on 'The Big Heat' and this winning, tell-it-like-it-is transfer doesn't try to sugarcoat the film's gritty atmosphere, which is one of its greatest strengths.

The DTS-HD Master Audio 1.0 track supplies crisp sound that maximizes the impact of gunfire, fisticuffs, shrieks, and the splash of hot coffee. Any age-related defects, such as hiss, pops, and crackles, have been scrubbed away, leaving a vibrant track that easily immerses us in the action. Though there's no designated subwoofer channel, the film's one big explosion rocks the room with substantive bass, and both the background bar music and melodramatic underscoring sound rich and full. Dialogue, of course, is the real star, and all the tough talk and smart retorts are well prioritized and easy to comprehend. Much like the film itself, this track is blunt, to the point, and very effective.

Twilight Time ups the ante on supplements for this reissue release, adding an all-new audio commentary and reflections by directors Michael Mann and Martin Scorsese. While none of the material merits an upgrade if you already own the previous Blu-ray edition, the new extras sweeten the pot for those purchasing this title for the first time.

One of director Fritz Lang's best movies and one of Hollywood's most famous film noirs, 'The Big Heat' still delivers the heat more than six decades after it initially scorched the screen. This tough, brutal tale of corruption, revenge, devastating loss, and dogged perseverance paints a disturbing portrait of American society, but it's a magnetic and visceral film experience that grips us from the opening frames and never lets go. Twilight Time reissues this popular title with the same top-notch video and audio transfers that graced the previous Blu-ray release, but adds a few new supplements to the package, heightening its appeal. Noir fans who missed out on this brisk, bruising, and occasionally shocking film the last time around should waste no time snatching up 'The Big Heat' before it's gone again. Highly recommended.