Brian De Palma ascended to the highest ranks of American suspense filmmaking with this virtuoso, explicit erotic thriller. At once tongue-in-cheek and scary as hell, 'Dressed to Kill' revolves around the grisly murder of a woman in Manhattan, and what happens when her psychiatrist, her brainiac teenage son, and the prostitute who witnessed the crime try to piece together what happened while the killer remains at large. With its masterfully executed scenes of horror, voluptuous camera work, and passionate score, Dressed to Kill is a veritable symphony of terror, enhanced by vivid performances by Angie Dickinson, Michael Caine, and Nancy Allen.

Contemporary moviegoers aren't likely to find much of anything in Brian De Palma's 'Dressed to Kill' shocking or even all that original, what with years of desensitizing material already readily available, but there was once a time when the plot and the outrageous final reveal were the subjects of public outrage and fiery debate. Both the film and its director were seen as misogynist and satisfying violent fantasies against women. Sadly, as is often the case with well-made movies, the controversy surrounding the 1980 mystery thriller overshadowed its true genius.

Granted, the film does depict people from one point of view, and the violent attacks are directed at female characters, but none of it ever seems purposefully hateful or particularly anti-feminist. All the characters appear to come with certain unsatisfied desires which lead them towards some rather hazardous paths. Angie Dickinson's Katie Miller makes it known from the beginning she feels sexually unfulfilled by her marriage, so her thirst for physical pleasure places her in an unfortunate, and somewhat tragically funny circumstance. (Here, I'm referring to the letter she finds in the drawer.) We first meet Nancy Allen's Liz Blake talking about stock investments, which conceals her actual profession. And so on.

More to the point, the film isn't really about generating controversial shocks, including the aspects certain groups have already touched on, and guessing the ending does little to ruin what is actually at stake. On the contrary, 'Dressed to Kill' can, and definitely should, be appreciated for its intended visual impact and camera expertise, a blatant style over substance type of motion picture. Essentially, this is Brian De Palma displaying his technical skills and a masterful exercise in the Hitchcockian formula, especially in respect to a movie's inherent predisposition towards voyeurism. Most apparent is Dickinson in an homage like role to Janet Leigh, only the idea is pushed further and stylishly exploited for all its worth. 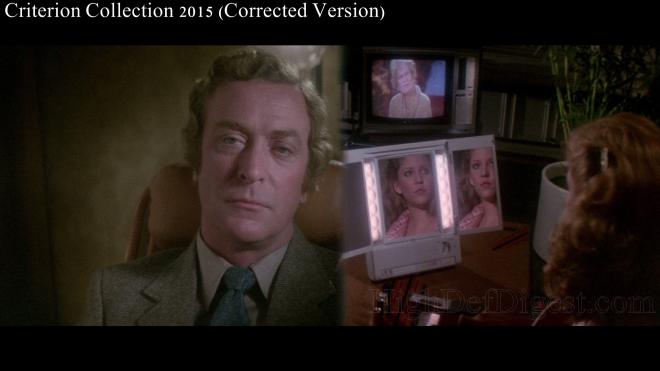 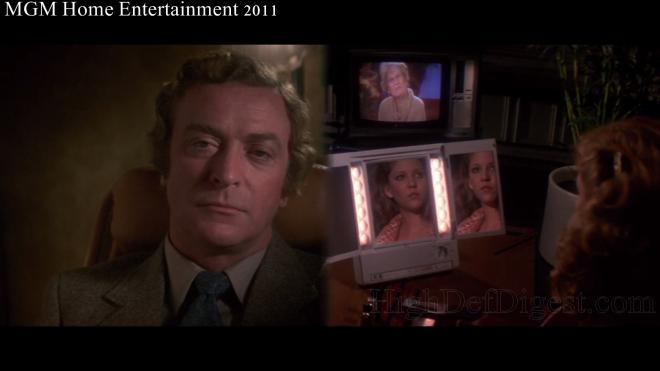 De Palma exploring the voyeur angle can be clearly seen in the movie's opening fantasy segment where audiences are clued into the very private and intimate thoughts of Dickinson's frustrated housewife. Later, De Palme expands on this by showing her describe her dissatisfaction to her psychotherapist, Dr. Robert Elliott (Michael Caine). It's an impressive procedure as it is both deliberately misleading and creative since the camera continues to follow the character to a museum, arguably one of the movie's most visually striking scenes. Ripe with allusions — the painting of a gorilla in a suggestive pose being a personal favorite — the sequence has two strangers stalking each other, which is in reference to how the camera and the audience also follows Dickinson around, associating our gaze similarly to that of the actual killer.

The major premise of the script, written by De Palma, is a twisted tale of murder and mystery, but beneath that is a filmmaker attempting to entertain while equally celebrating the craft, particularly the Hitchcock style of suspense. The split-screen technique makes the film look more interesting and appealing, yet in De Palma's capable hands, it becomes a motif that reflects the split personalities and the secret alternate lives of his characters. 'Dressed to Kill' is not likely to shock audiences as it once did during its initial theatrical run, but it remains an excellent mystery feature that is ultimately more about style and craftsmanship than anything else. It's one of De Palma's finer works.

This Blu-ray edition of Brian De Palma's 'Dressed to Kill' comes courtesy of The Criterion Collection (spine #770) on a Region A locked, BD50 disc and housed in their standard clear keepcase. Accompanying the disc is a foldout pamphlet with an insightful essay entitled "The Power of Two" by author and film critic Michael Koresky. There are no trailers or promos before being greeted by the distributor's normal static menu screen and options. 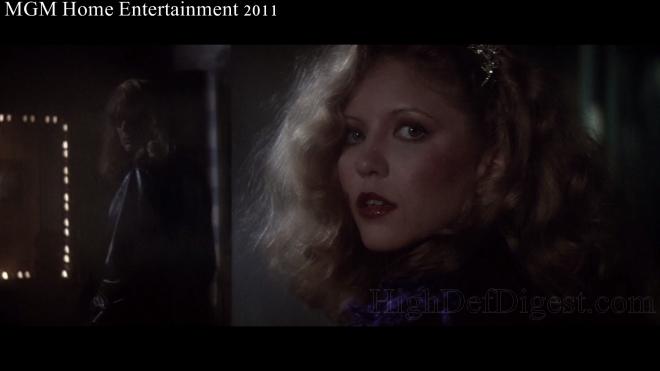 According to information in the accompanying pamphlet, this 1080p/AVC MPEG-4 encode was supervised and approved by Brain De Palma.  It was created in 4K resolution from the original 35mm camera negatives and a 35mm interpositive for additional footage. Unfortunately, the results are a mixed bag, but mostly leaning to the disappointing side of things.

First, let's point out the major negative. When comparing this Criterion edition to the MGM/Fox release from 2011, we find that this presentation appears vertically stretched. And it's bad enough to warrant a lower score. The anomaly creates an odd effect when switching back and forth between the two versions. Interestingly, this newer release offers more visual information on both the left and right sides of the frame than its predecessor, and the fact that this transfer comes from a fresh remaster of the OCN and approved by the director as the intended look, it leaves me wondering how the mistake was made in the first place.

Thankfully, the folks at Criterion are aware of the error and just announced on their website that they are working on correcting the issue and moving the official release date to September 8th. If any of the faulty discs are somehow accidently purchased, owners are encouraged to email the distributor for an immediate replacement with the corrected video. (For more information, read here.)

The corrected version of the film has finally arrived, and the results, as would be expected, are terrific, giving fans the very best presentation of De Palma's thriller classic ever. Presented in its original 2.35:1 aspect ratio, the overall picture quality is sharply-detailed for a 35-year-old film, displaying excellent definition and fine lines in the clothing, hair and various furniture. Facial complexions are revealing, exposing every pore, blemish and wrinkle in the faces of every actor. Understandably, a couple moments haven't aged particularly well, but the high-transfer stays true to the creative intentions of De Palma and cinematographer Ralf D. Bode, which is a dreamy haze and a purposefully blurry appearance thanks to the use of diffusion filters.

Contrast is noticeably affected by the intentional photography, but levels remain accurate with crisp, brilliant whites throughout, providing superb clarity of background information. Compared to the 2011 Blu-ray, the video is noticeably brighter, but it looks and feels appropriate, allowing for better visibility in the distance, especially in the darker portions of the frame. Blacks are rich and dynamic, showing strong gradations in various shades while maintaining excellent discernibility within the shadows. The palette favors softer secondary hues and earthy tones, which are rendered boldly and cleanly, but primaries come through vividly and richly saturated. 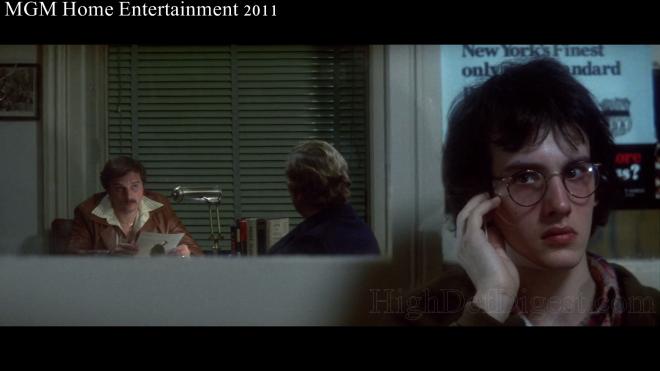 Additionally, Criterion engineers preserve the original monaural soundtrack from the magnetic tracks of the same 35mm camera negatives, and the results are excellent.

Despite being entirely restricted to the center, the uncompressed PCM mono soundtrack comes with a terrific acoustical presence and fidelity. Minor background details like busy city traffic, the footsteps of high-heel shoes running through a museum or individual drops of water in either the shower or rain are crystal clear and splendid with surprisingly good movement within the imaging. The stylized and memorable music of Pino Donaggio benefits the most, exhibiting distinct clarity and separation between the various instruments of the orchestra, and dialogue reproduction is marvelous and pitch-perfect. The lossless mix also displays a healthy, accurate low-end to give the score and the thunder shower scene some satisfying weight, making this a first-rate and brilliant audio presentation. 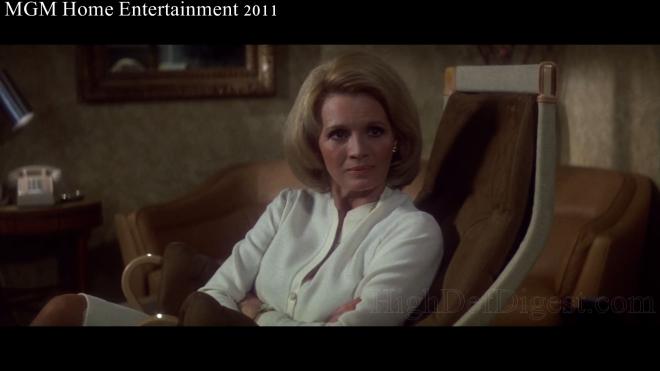 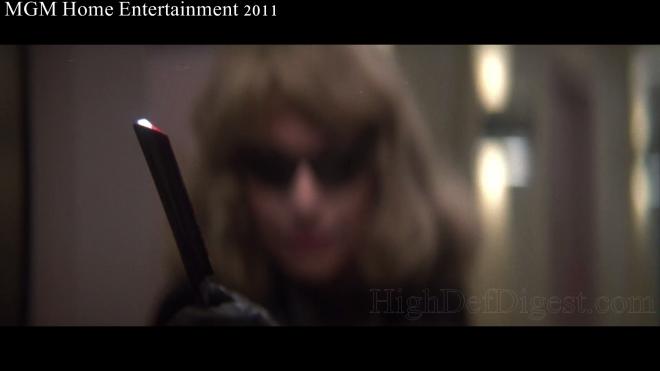 While not as shocking or controversial as it was during its initial theatrical run, 'Dressed to Kill' remains a highly stylish and impressively well-crafted mystery thriller from Brian De Palma. With strong performances by Michael Caine, Angie Dickinson, and Nancy Allen, the film is also a great study in composition and the Hitchcockian approach to suspense, making it a worthwhile watch more than 30 years later. The Blu-ray from Criterion Collection, unfortunately, arrives with an error in the high-def transfer, which the distributor promises to fix with a new street date, but from what we can see, the audio and video promises to be a massive improvement over its predecessor. With a nice collection of supplements, the overall package is sure to please fans when the new, corrected release finally arrives.

Sale Price 22.21
List Price 39.95
Buy Now
3rd Party 14.95
In Stock.
See what people are saying about this story or others
See Comments in Forum
Previous Next
Pre-Orders
Tomorrow's latest releases