L.A. private eye Philip Marlowe (Humphrey Bogart) takes on a blackmail case…and follows a trail peopled with murderers, pornographers, nightclub rogues, the spoiled rich and more. Raymond Chandler's legendary gumshoe solves it in hard-boiled style – and style is what The Big Sleep is all about. Director Howard Hawks serves up snappy character encounters (particularly those of Bogart and Lauren Bacall), brisk pace and atmosphere galore. This Blu-rayTM doubles your pleasure, offering two versions of this whodunit supreme: the familiar 1946 theatrical version, full of reshot scenes of incendiary Bogart/Bacall chemistry, and the less-familiar 1945 prerelease version, as a special feature, whose plot and resolution are more linear in fashion.

If ever a movie screamed film noir from the moment its opening title sequence hits the screen, it's 'The Big Sleep.' Howard Hawks' deliciously complex and riveting adaptation of Raymond Chandler's classic detective novel opens with two silhouetted figures against a plain gray backdrop. The man lights the woman's cigarette and then his own. Following a puff or two, the camera zooms in on an ashtray, where the pair rests their smoldering butts, which continue to burn until the narrative begins. Not only does this sequence set the film's gritty, incendiary tone, it also promotes the sizzling sexual chemistry between the two leads, Humphrey Bogart and Lauren Bacall, who by the time of the picture's long-delayed release (more on that below) were more than just Hollywood's couple du jour - they were newlyweds.

The 44-year-old Bogart and his 20-year-old "baby" had just completed Hawks' 'To Have and Have Not' to great popular acclaim, so Warner rushed the duo into 'The Big Sleep,' which stands as the finest adaptation of Chandler's Philip Marlowe novels. A rumpled, cynical private detective whose quick wit and blunt assessments attract the ladies, enrage his adversaries, and land him in a heap of trouble, Marlowe has been ably played by Dick Powell, Robert Montgomery, and Robert Mitchum, among many others, but nobody eclipses Bogart, who masterfully merges the character's tough and tender aspects and laces them with an irresistible easygoing charm. Add Bacall's pouty insolence and smoky allure and - presto! - you've got cinematic magic.

'The Big Sleep' also boasts a screenplay co-written by William Faulkner (who would receive the Nobel Prize for literature five years later) and, more importantly, a plot widely considered to be one of the most intricate and confusing in film history. Rapt attention is required from the first frame to the last not just to follow the story, but to have even a prayer of connecting all the narrative dots. (And despite some views to the contrary, they really do connect.) Twists, turns, red herrings, murky motives, deceit, and tangled connections abound, and if you miss any information (usually recited with typical Hawks-ian alacrity by the superior cast), it's not likely to be repeated.

Every character, no matter how minor, is an essential cog in the wheel, and there are enough of them to make your head spin. Blink and you'll miss someone who winds up playing a pivotal role in the proceedings. Take it from me, try to instantly pin faces to names or you'll be hopelessly confused when other characters refer to people you've barely seen. And keep the remote handy, because frequent rewinding is required to maintain a grip on all the goings-on. Bogart biographer Alan G. Barbour wrote 'The Big Sleep' "defies comprehension in a single screening" and "even the film's stars complained that they didn't know what the whole thing was about either."

Encapsulating the plot would require far more space than I have here, so suffice it to say 'The Big Sleep' is a dark, sinister tale of blackmail and murder punctuated by plenty of action and more intrigue than the human brain can handle. General Sternwood (Charles Waldron), a wealthy, frail man confined to a wheelchair, hires Marlowe to deal with an extortionist who's got the goods on his wild-child daughter Carmen (Martha Vickers), a comely party girl who knows what she wants and won't be denied. Marlowe takes the case, but gets sidetracked by Carmen's "spoiled, exacting, smart, and ruthless" older sister Vivian (Bacall), who seems strangely obsessed with the disappearance of her father's right-hand man, Sean Regan. Of course the two threads soon intertwine, leading Marlowe into a web of lies, a den of danger, and a relationship with Vivian that might not be good for his health.

'The Big Sleep' is often a mesmerizing film experience, but its turbulent production history is equally fascinating and almost as complex as its story. At the time of filming in late 1944, Bogart and Bacall were at the height of their romantic involvement, although Bogart was still married to third wife Mayo Methot, who was more than reluctant to give him a divorce. According to studio memos, the "mental turmoil regarding his domestic life" drove Bogart to excessive drinking. He showed up drunk on more than one occasion during shooting, causing Hawks to be initially "dissatisfied" with his performance. In addition, extensive rewrites caused the production to fall behind schedule. 'The Big Sleep' was finally completed in January of 1945, but the impending end of World War II forced Warner Bros to delay its release in favor of more topical product already in the studio's pipeline that would soon lose its relevance.

One of those pictures was 'Confidential Agent,' a film Bacall made with Charles Boyer right after 'The Big Sleep' wrapped. The movie was a dismal failure, and critics widely lambasted Bacall's wooden portrayal. Her agent feared his young client's fledgling career might be irrevocably damaged, and urged Warner Bros to both beef up her role in 'The Big Sleep' and reshoot a couple of scenes that didn't show her off to her best advantage. The studio agreed, and in early 1946, a full year after production was completed, Hawks, Bogart, Bacall, and several members of the company returned to make the changes. As a result, two complete versions of 'The Big Sleep' exist (both of which are included on this Blu-ray disc). The story is just as layered and confusing in both versions (although the earlier edition contains a scene midway through that recaps the plot to catch up lagging viewers), but many differences distinguish them, and it's great fun to pick them out.

Hawks creates a marvelous noir mood in both versions, balancing tense moments and violent interplay with scenes of light comedy that humanize the characters. The Bogart-Bacall banter is both sexy and hard-boiled (the famous horse-racing exchange - one of the sequences added in 1946 - includes plenty of racy double entendres), but a host of fine supporting players also deliver terrific performances. Vickers is especially good as the trouble-making nymphet, and both 19-year-old Dorothy Malone as a seductive bookstore clerk and a young Elisha Cook, Jr. as a naive small-time hood make big impressions. Hawks knows how to get excellent work from his actors, and there's not a weakling in the bunch in this dog-eat-dog tale.

Detective junkies will love 'The Big Sleep,' but so will fans of taut thrillers, film noir, Golden Age classics, Howard Hawks, and - of course - Bogart and Bacall. Few pictures are so tightly wound and difficult to unravel, and stand up so well over repeat viewings. Though mental exhaustion is an unavoidable consequence of this oh-so-twisted yarn, the fatigue is accompanied by a heady feeling of exhilaration only the best motion pictures inspire. 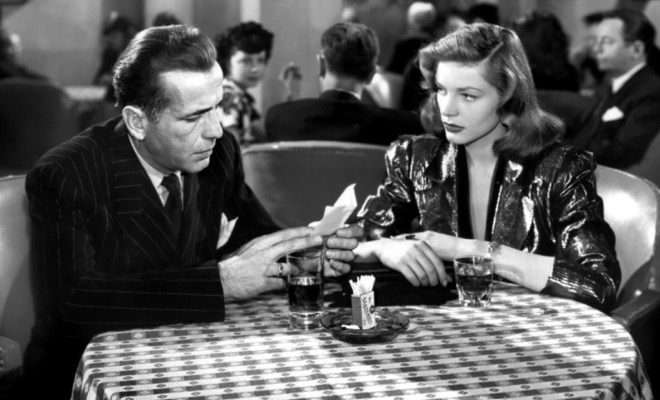 'The Big Sleep' arrives on Blu-ray packaged in a standard case. Video codec is 1080p/AVC MPEG-4 and default audio is DTS-HD Master Audio 2.0 mono. Once the disc is inserted into the player, the static menu with music immediately pops up; no previews or promos precede it.

All of the Blu-ray transfers released under the Warner Archive banner have been stellar, and 'The Big Sleep' is no exception. Terrific clarity and contrast distinguish the 1080p/AVC MPEG-4 rendering, and as a result, this absorbing film noir almost leaps off the screen. Grain is faint, but thankfully evident enough to add essential texture to the image and maintain the warm feel of celluloid, and not a nick, scratch, or mark sullied the pristine source material. Blacks are lusciously rich, and though many scenes take place at night, crush is rarely an issue. Shadow delineation is strong, and exceptional gray scale variance heightens details and enhances depth. Patterns are vivid and rock solid, and sharp close-ups highlight Bogart's rugged facial features and the glamour of Bacall, Martha Vickers, and Dorothy Malone. Once again, Warner produces a dazzling classic movie transfer that will thrill fans of film noir and Bogart and Bacall.

No hiss, pops, crackles, or distortion afflict the DTS-HD Master Audio 2.0 mono track, which supplies clear, well-balanced sound. Subtle ambient effects, such as rain and chirping birds blend seamlessly into the whole, while sonic accents like gunfire and fisticuffs are startlingly crisp. All the snappy dialogue is well prioritized and easy to comprehend, and a wide dynamic scale embraces all the highs and lows of Max Steiner's lush music score. Many mono tracks are dull and lifeless, but this effort from Warner is anything but, and it beautifully complements this engrossing and atmospheric film noir.

Though not packed with supplements, this disc includes some rare and noteworthy material that immeasurably enhances the viewing experience. An audio commentary would have been a nice addition, as well as a retrospective featurette celebrating Bogart and Bacall, but their omission only mildly diminishes the appeal of this release.

'The Big Sleep' is without question one of the most intricately plotted and difficult-to-follow film noirs in Hollywood history, but its narrative complexities only add to this dark mystery's provocative and magnetic allure. Humphrey Bogart and Lauren Bacall once again rivet our attention, cementing their reputation as one of cinema's most appealing teams, and Howard Hawks' spicy, tough, yet elegant adaptation of Raymond Chandler's novel contains enough snap, crackle, and pop to keep any classic movie maven transfixed from beginning to end. Warner Archive's Blu-ray presentation boasts superior video and audio transfers, as well as the rarely seen 1945 edition of the film and a lengthy featurette analyzing the differences between the two versions. If you sit up straight and pay close attention, you'll undoubtedly regard 'The Big Sleep' as one of Hollywood's great detective films and a fantastic showcase for Bogie and his baby. Highly recommended.

Sale Price 19.99
Buy Now
3rd Party 9.99
In Stock.
See what people are saying about this story or others
See Comments in Forum
Previous Next
Pre-Orders
Tomorrow's latest releases