Ricki and the Flash

Meryl Streep as you have never seen her before, a hard-rocking singer & guitarist, in Ricki and the Flash, from Oscar® winning director Jonathan Demme (Best Director, The Silence of the Lambs, 1991) and Academy Award® winning screenwriter Diablo Cody (Best Original Screenplay, Juno, 2007). In an original and electrifying film loaded with live musical performances, Streep stars as Ricki Rendazzo, a guitar heroine who made a world of mistakes as she followed her dreams of rock-and-roll stardom. Returning home, Ricki gets a shot at redemption and a chance to make things right as she faces the music with her family.

Meryl Streep's transformative powers are well known, but even the actress's most ardent admirers (myself included) wondered whether she'd stumble when stepping into the knee-high boots of a grungy, guitar-slinging rock-'n'-roll band leader in 'Ricki and the Flash'...especially at the ripe old age of age 66. Anyone who's seen 'Mamma Mia' or 'Into the Woods' knows Streep can sing, but performing songs by ABBA and Stephen Sondheim is one thing; tackling tunes by rock icons like Bruce Springsteen and Tom Petty is something else entirely. Of course, after three Oscars and a gallery of multi-faceted characters, we all know better than to doubt Streep's ability to play anything, and sure enough she inhabits the role of Ricki Rendazzo, a woman with limited talent who abandoned her husband, family, and cushy suburban life years ago to pursue her dreams of music biz stardom in L.A. It's far from her greatest portrayal, but it's another glorious departure in a career that's been defined by them.

Donning a punk-style hairdo, leather wardrobe, pounds of bohemian costume jewelry, and enough eye makeup to rival Tammy Faye Bakker, Streep is a beautiful trainwreck, nailing the look of an over-the-hill wannabe rocker. Better still, she more than proves herself where it really counts - on stage - brandishing a cocky swagger and defiant attitude during the live musical sequences that suit her petulant character to a T. Streep looks surprisingly comfortable strumming a guitar, and her smoky, hard-edged vocals recall Melissa Etheridge and Bonnie Raitt. She's so good, we almost - almost - forget she's Meryl Streep, but unfortunately she's not good enough to save 'Ricki and the Flash' from wallowing in what Ricki always strives to rise above...mediocrity.

Directed with uncharacteristic blandness by Jonathan Demme, 'Ricki and the Flash' is a Hallmark/Lifetime hybrid movie trapped inside a rock-'n'-roll framework, and like oil and water, the two don't mix. Hampered by a contrived, predictable, and lumbering script by Diablo Cody ('Juno'), the movie meanders along, always promising more than it delivers and spouting a trite message that's been transmitted with far more insight in a number of better films. The idea that family is family no matter how dysfunctional, bizarre, and disconnected individual members may be is hardly revelatory, and Cody's stereotypical depiction of Ricki's estranged brood further trivializes that tried-and-true theme. With each heated confrontation, we keep expecting the story to go somewhere, but it remains frustratingly stagnant, treading water and relying on too many musical interludes to compensate for the lack of narrative drive.

Ricki's life is all about the music, and though any dreams of grandeur have long since died, she still passionately plies her trade at the blue-collar Salt Well bar with her stalwart band, The Flash. Her sidekick, lead guitarist, and chief collaborator is Greg (Rick Springfield), who - with the patience of Job - stoically weathers her nightly barrage of mean-spirited barbs on stage and romances her off. He's insanely talented and loyal to a fault, but the free-spirited, commitment-phobic Ricki is too self-absorbed and immature to notice. One night, she gets a call from her richer-than-God ex-husband Pete (Kevin Kline), who asks her to return to Indianapolis to help their distraught daughter Julie (Mamie Gummer) pick up the pieces of a broken marriage.

Reluctantly, Ricki goes "home," and discovers her absence hasn't made her grown children's hearts grow fonder. In addition to the bitter, vindictive Julie who won't give her mom a fair shake, let alone the time of day, her two sons - stuck-up yuppie Josh (Sebastian Stan), who, unbeknownst to Ricki, is engaged to a snooty debutante, and the amiable Adam (Nick Westrate), who snidely reminds his mother he's gay - disapprove of her lifestyle, resent her lack of contact during their formative years, and cringe with embarrassment over her lack of decorum, outspoken remarks, and outrageous appearance. They also sing the praises of their nurturing stepmother, Maureen (Audra McDonald), who cautions Ricki about impinging on her turf and making waves. As Josh's wedding looms, Ricki puts on her big-girl leather pants and tries to grow up, attempting to mend fences without apologies, and in the process, everyone in the family broadens their perspectives and becomes more accepting of the frailties and passions that shape their respective personalities.

Streep may not be able to salvage the film, but she succeeds in holding it together. As always, she's fascinating to watch, even if her portrayal here often crosses the line into caricature. She overdoes Ricki's ignorance, immaturity, and wild-child persona (and her guttural voice and slurry dialect become grating over time), but at least she injects some much-needed energy into an anemic tale and tries her damnedest to give it a swift kick in the butt. While she and Springfield create excellent chemistry, making us wish more of the story revolved around their relationship, her interactions with Gummer (her real-life daughter) rarely sizzle, despite the volatile nature of both their characters. Sharing the screen with your mom, who just happens to be the world's greatest living actress, can't be easy, and though Gummer holds her own most of the time, both women often exhibit an edginess in their scenes together that seems to go beyond the scripted tensions.

As she ages, Streep seems more attracted to roles that let her kick up her heels and have fun. 'Ricki and the Flash' gives her that chance, but often emits the acrid odor of a vanity project, especially when factoring in Gummer's participation. You can't blame a mother for wanting to perform with her daughter, but neither of these parts really suit either actress, which makes the whole enterprise feel gimmicky. Even the addition of Kline, Streep's 'Sophie's Choice' co-star 33 years ago, seems like a feeble attempt to recapture past magic...and doesn't really work.

'Ricki and the Flash' has its heart in the right place, but the screenplay never maximizes its potential and the cast can't overcome its myriad deficiencies. Demme's film isn't dull, just maddeningly average, and when you're dealing with rock-'n'-roll - and Meryl Streep - that just doesn't cut it. 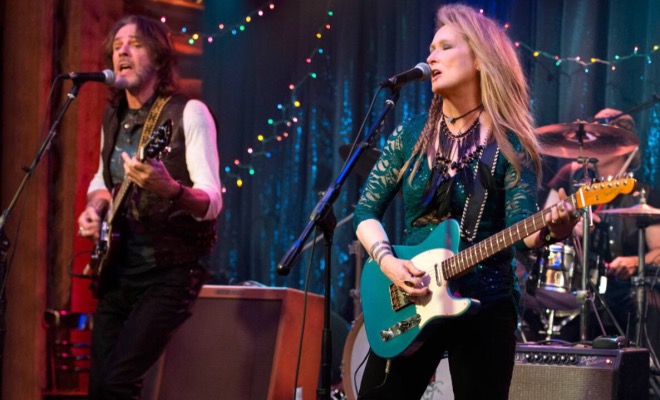 'Ricki and the Flash' arrives on Blu-ray packaged in a standard case inside a sleeve. A leaflet containing instructions on how to access the Digital HD copy is tucked inside the front cover. Video codec is 1080p/AVC MPEG-4 and default audio is DTS-HD Master Audio 5.1. Once the disc is inserted into the player, previews for 'Aloha,' 'Pixels,' 'The Walk,' 'The Final Girls,' 'A Brilliant Young Mind,' and 'Outlander: Season One, Volume 2' precede the static menu with music.

Like Ricki herself, the 1080p/AVC MPEG-4 transfer from Sony looks a little ragged...at least when compared to most recent releases. Contrast runs a tad hot, which at times lends the image an overly bright appearance, and despite the fact the film was digitally shot, the picture flaunts a slightly textured look that ends up serving the aged rocker storyline well. Vibrant colors punch up the frame, black levels are solid enough, and flesh tones remain natural and stable throughout. Depth isn't as pronounced as one might like, but background elements are easy to discern and shadow delineation is fine. Crisp close-ups nicely spotlight all of Ricki's garish makeup and the toll her hard-driving lifestyle has taken on her face, and they're just as unforgiving when turning their gaze on Springfield and Kline. No nicks, marks, or scratches dot the pristine source material, and no crush, noise, or banding creep into view. Though hardly a knock-your-socks-off presentation, the transfer is certainly watchable. It hits its marks and rarely calls attention to itself, which, for a film of this sort, is about all anyone can ask of it.

The DTS-HD Master Audio 5.1 track steps up to the plate during the musical sequences, supplying full-bodied, well-nuanced sound. Excellent fidelity, plenty of tonal depth, and a nice surround presence enhance the songs, which show off both the grittiness and range of Streep's vocals. A wide dynamic scale handles all the screaming guitar solos without a hint of distortion, and solid bass frequencies help the percussion achieve a good degree of weight. During the dramatic scenes, the track is pretty straightforward. Some faint ambient effects bleed ever so slightly into the rears, but most of the audio is anchored up front. All the dialogue is clear and easy to comprehend, and no surface noise intrudes. This track can't compete with a concert film, but music lovers will find the mix pleasing and robust.

The only supplement shared between the Blu-ray and DVD release is a 10-minute featurette, "Getting Ready for Ricki: The Making of 'Ricki and the Flash,'" a standard yet entertaining behind-the-scenes piece that features interviews with most of the film's key personnel. (Kevin Kline and Mamie Gummer are the most notable absentees.) Director Jonathan Demme recalls how he became involved in the project, screenwriter Diablo Cody talks about the story's "personal" nature and how she sought to depict the struggle to "balance artistic leanings with the responsibilities of life," and Streep cites the "idea of failure" and what happens when big dreams don't work out as the elements that attracted her to the role. Other topics include Demme's commitment to realism in the music scenes and his insistence on live performances; Streep's new, somewhat crazy look; and the real-life inspiration for the Salt Well bar, where much of the movie takes place. Though it barely scratches the surface, this slick featurette breezes by and should please the film's fans.

Meryl Streep convincingly portrays an aged female rocker in 'Ricki and the Flash,' but that's about the only convincing element in this surprisingly bland chronicle of an absentee mother's attempts to make amends with her bitter, dysfunctional family. Streep embraces the offbeat role, and she's at her best rocking out with Rick Springfield during the live performance scenes, but a trite script by Diablo Cody that strains too hard for laughs and Jonathan Demme's anemic, autopilot direction make this movie little more than a mundane marathon of regrets, recriminations, and mea culpas. Though Sony's Blu-ray presentation features solid audio and video transfers and a few generic supplements, that's not enough to elevate this disc - or this film - beyond weeknight rental status. If you book 'Ricki and the Flash' for a one-night-only engagement it's painless enough, but only diehard Streep fans will want to consider a second viewing.

Sale Price 19.92
Buy Now
3rd Party 14.83
In Stock.
See what people are saying about this story or others
See Comments in Forum
Previous Next
Pre-Orders
Tomorrow's latest releases