Sophie is the survivor of Nazi concentration camps, who has found a reason to live in Nathan, a sparkling if unsteady American Jew obsessed with the Holocaust. They befriend Stingo, the movie's narrator, a young American writer new to New York City. But the happiness of Sophie and Nathan is endangered by her ghosts and his obsessions.

It's almost a cliché these days to call Meryl Streep America's greatest living actress. Love her or hate her (but can anyone really hate Meryl Streep?), there's no denying her staggering, seemingly boundless talent and flawless execution of almost any part. If Hollywood were a kingdom, she would be its Queen Victoria, reigning quietly and stoically for decades, worshipped by millions and respected by all. She's a mistress of transformations, the doyenne of dialects, and fearless beyond belief. It's de rigueur to bestow her with an annual Oscar nomination (although the 'Into the Woods' nod was questionable), and there's little anticipation before any new performance because it's a foregone conclusion she'll be brilliant. She's Meryl, after all, and yet watching her is never boring and not even routine. In fact, for me, it's continually and unabashedly thrilling. Yes, I'm a fan and have been one since I first saw her in 'The Deer Hunter' in 1978, but that doesn't preclude me from criticizing her. (I thought she was downright awful in 'Mamma Mia.') Her few errant stumbles, however, are but infinitesimal blips on a radar so sharp and accurate it's surprising she ever made a false move. Though it's been almost 40 years since Streep first appeared on screen, no one has come close to eclipsing her blinding aura of greatness.

Joanna Kramer gave birth to that aura, but Sophie Zawistowska, the titular character in Alan J. Pakula's adaptation of William Styron's devastating novel 'Sophie's Choice,' anchored it forever in place. Without question the most stunning triumph in a career of stunning triumphs, Sophie not only won Streep her first and most deserved Best Actress Oscar, the role also cemented her reputation and ensured her immortality. As a tortured Holocaust victim who finds salvation and passionate romance in post-war Brooklyn, yet cannot escape the cancerous guilt that slowly consumes her soul, Streep crafts a riveting, deeply moving, and multi-faceted portrayal that's astonishing in both its breadth and intimacy. Of course she's heartbreaking, brandishes an impeccable Polish accent, and speaks perfect German during the lengthy subtitled flashbacks, but she's also funny, sexy, spunky, bitter, vulnerable, masochistic, brave, charming beyond belief, and disarmingly natural. This isn't Acting 101; it's a master class in technique, and more than 30 years later, her performance remains just as powerful and awe-inspiring as it was when it first dazzled us back in 1982.

And Sophie is just as fascinating and complex a character. The title of the novel refers to a singular, devastating choice that's beyond human comprehension and will literally suck the breath out of anyone with a shred of feeling, yet many important and consequential choices shape Sophie over time and alter the trajectory of her life. Watching her navigate these treacherous waters can be tough to watch, but moments of joy, humor, compassion, and inspiration abound throughout the tightly woven tale that concentrates as much on character as on plot. Though it's difficult to condense a sizable, beautifully written and constructed novel into a manageable film, Pakula, who also wrote the screenplay (which received an Academy Award nomination), does a good job. 'Sophie's Choice' is my all-time favorite book, so it was not without some trepidation - even with Streep in the lead - that I originally approached the production, and my intense personal connection to the novel makes me view its cinematic treatment with a severely critical eye. (I still struggle to forgive the film's flaws.) Though some of the more graphic and degrading passages have been deleted and the novel's episodic structure poses some narrative problems, the faithful adaptation does Styron's opus proud, and Pakula's respect and reverence for the material oozes from the movie's every frame.

Sophie is, of course, the picture's central figure, but she's only one of a triumvirate of finely drawn characters who bring this vital yarn to life. 'Sophie's Choice' also chronicles the coming of age of Stingo (Peter MacNicol) - Styron's alter ego (in many ways, he's mine as well) and the story's narrator - a young, naive, and self-professed horny writer from the South who transplants himself to Brooklyn to pen his first novel and expand his limited personal experience. Once ensconced in the Pink Palace, a modest boardinghouse run by a Yiddish matron, he becomes instantly captivated by and attracted to the beautiful Sophie, who lives upstairs with her manic, fatally glamorous lover, Nathan (Kevin Kline in his film debut), who adores her one minute and abuses her the next. The three forge a passionate friendship during a momentous summer, over the course of which a multitude of lies are exposed and dark secrets are revealed. As Stingo matures both emotionally and artistically, he also becomes Sophie's confidante, and in bits and pieces she shares with him nostalgic memories, personal frailties, and, most illuminating of all, her harrowing experiences at Auschwitz.

Sophie, however, is not Jewish, but Catholic, a controversial twist that forces us to expand our perspective of the Holocaust and the universal suffering it engendered. Cruelty ran rampant during that period, and its far-reaching umbrella is often difficult to fathom and accept. By focusing on a gentile, 'Sophie's Choice' doesn't minimize the persecution of the Jews; it rather expands our disgust of the reprehensible treatment of people in general by a deranged regime that had no regard for human life.

Styron's novel is perfection (it won the National Book Award for fiction in 1980 and is regarded as the Pulitzer Prize-winning author's finest work), but it's not really film-friendly, so it's impossible to expect Pakula's adaptation to both equal such a high standard and achieve the same levels of depth, insight, and complexity. The movie version of 'Sophie's Choice' is a valiant, often lyrical effort (the flashback scenes and montages are especially well done), distinguished by exceptional performances, exquisite cinematography by Nestor Almendros (Oscar nominated), and a haunting score by Marvin Hamlisch (also Oscar nominated), but there are times when it feels disjointed and melodramatic. The pivotal character of Nathan is especially difficult to depict in a believable manner, and though Kline does a superior job, the writing occasionally lets him and the story down.

Streep, however, holds the movie together and her work is nothing short of astounding. Sophie was a part she was born to play and she perfectly realizes it, imbuing the character with innumerable subtleties that enhance her dimension and bring her more fully to life. Hers is truly one of the all-time great film performances, one that will be forever remembered and revered, and she makes 'Sophie's Choice' an intensely meaningful, thought-provoking, and powerful film experience. 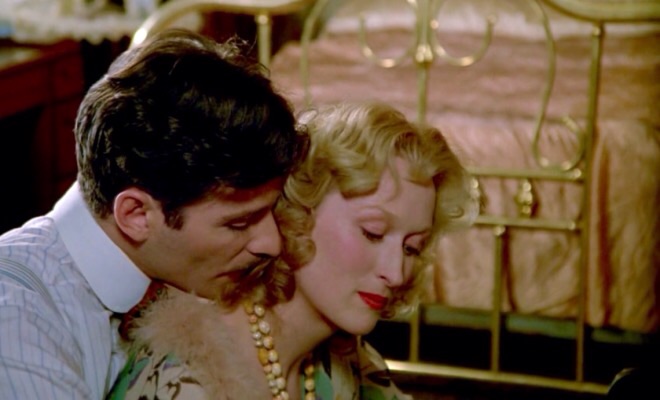 'Sophie's Choice' arrives on Blu-ray packaged in a standard case. Both a 50GB dual-layer disc and standard-def DVD are included. Video codec is 1080p/AVC MPEG-4 and audio is DTS-HD Master Audio. Once the disc is inserted into the player, the static menu with music immediately pops up; no previews or promos precede it.

'Sophie's Choice' sports varying degrees of texture during its lengthy running time, and Shout Factory's 1080p/AVC MPEG-4 transfer renders them fairly well, but this is far from the vibrant, crisp effort for which many of the film's fans, including myself, so ardently hoped. Clarity is generally good, but contrast often runs hot, and the excess brightness sometimes washes out the image. Grain levels err on the thick side, and occasionally some backgrounds appear noisy. The color palette remains muted throughout, yet bits of blue sky, green foliage, and Sophie's red dress possess some welcome pop. A yellowy tinge afflicts the picture now and then, but blacks are inky, whites are stable, flesh tones are natural and consistent, and close-ups exhibit a good deal of fine detail. Shadow delineation passes muster, background elements are easy to discern, and only a few specks and marks dot the source material. Though crush, banding, and pixelation are absent, it looks like some artificial sharpening and smoothing may have been applied, which often lends the picture an unfortunate processed look. In the end, the 'Sophie's Choice' transfer isn't bad, just disappointing, and for such a highly regarded film with such beautiful cinematography, that's a shame.

The DTS-HD Master Audio 1.0 track supplies clear, well-modulated sound. 'Sophie's Choice,' save for a couple of aural jolts, is a rather quiet film that relies on dialogue and imagery to tell its story. Subtle atmospherics come across well, however, and all the verbal exchanges are easy to comprehend. The track's main attraction is Marvin Hamlisch's gorgeous score, which flaunts a wonderful lushness and resonance, and beautifully reflects the film's tone. Though no age-related hiss, pops, or crackles disrupt the purity of the mix, there is an odd, brief audio dropout at the 44:50 mark that obscures a snatch of dialogue. Despite such a glitch, this track serves the film well. It's solid, if unspectacular.

Just a couple of supplements are included on the disc, but one of them is new to this edition, which is a nice bonus for fans.

'Sophie's Choice' is a reverently made, deeply moving film that continues to captivate, shock, and shatter us more than 30 years after its initial release. Alan J. Pakula's faithful adaptation of William Styron's bestselling novel about the coming of age of a young writer and the mysteries and secrets of a Polish Holocaust survivor and her maniacal boyfriend in post-World War II Brooklyn beautifully captures the spirit and complexities of the characters, yet just misses the mark in its narrative presentation. Though the film may be flawed, Meryl Streep's Oscar-winning portrayal of the titular heroine remains arguably the greatest performance by an actress in the history of cinema. Her work alone makes this movie a classic, giving it heart, soul, and truth. Unfortunately, Shout Factory's Blu-ray presentation doesn't sufficiently honor her work. A less than stellar video transfer detracts from the film's power, although the audio suffices and the supplemental package is decent enough. A movie of this magnitude, however, and a performance of this caliber deserve better, which is why this disc receives only a half-hearted recommendation instead of a rave.

Sale Price 17.99
List Price 24.97
Buy Now
3rd Party 9.41
In Stock.
See what people are saying about this story or others
See Comments in Forum
Previous Next
Pre-Orders
Tomorrow's latest releases