Iconic characters, such as Cinderella, Little Red Riding Hood, Jack and the Beanstalk and Rapunzel find their fates intertwined with a humble baker and his wife, whose longing to have a child sends them on a quest to reverse a witch's (Streep) curse. With an all-star cast, this spellbinding adventure is everything you could ever wish for!

With so many revisionist retellings of familiar classic fairytales and archetypes suddenly exploding into a popular cultural phenomenon, from television's 'Once Upon a Time' and movies like 'Maleficent' and 'Frozen' to the musical hit 'Wicked' and songs like Sara Bareilles's "Fairytale" and Paramore's "Brick By Boring Brick," it's a welcomed respite to return to the basics in 'Into the Woods.' (Kenneth Branagh's 'Cinderella,' which is currently in theaters, is another great adaptation of a beloved folk story.) Granted, Rob Marshall's adaptation of Stephen Sondheim's Tony Award-winning Broadway musical is, in effect, a type of revisionism as it melds four cherished tales in one tumultuous collision. Still, this quartette of time-honored fables are truer to their original didactic sources than what we've seen of late, turning the chaotic mix-up into a delightfully fun yarn that restores the moral life lessons of those tales with a slight minor twist.

As is customary, the story commences with the celebrated "Once upon a time" phrase and said by an as-of-yet-unknown narrator who quickly introduces audiences to the four separate tales with "Rapunzel" serving as the central driving force which ultimately brings them together. And as would be expected, Meryl Streep delivers an outstanding performance as the Witch next door with the magical garden and a proposition for a childless Baker (James Corden) and his Wife (Emily Blunt). She literally explodes onto the screen, blasting through the lonely couple's front door, elaborately giving a marginally-altered version of how she came to raise a girl with the long, golden hair locked high in a tower. Instead of the nutty, soft leaf vegetable, the Baker's father steals five magic beans, which later come in handy when purchasing the cow from Jack (Daniel Huttlestone), whose mother (Tracy Ullman) tosses them to grow a giant beanstalk. 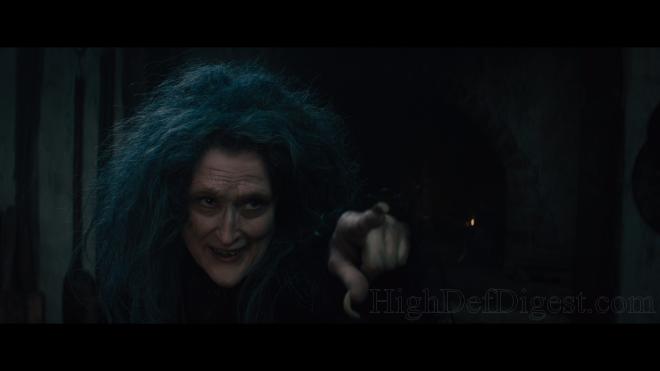 The other stories are also cleverly linked by the Witch's request for a blood-red cape, bright yellow hair, and a golden slipper, each of which is an ingredient to end a curse, and for which the couple is rewarded with a baby. True to the Brothers Grimm versions, the film occasionally wanders to the dark side while implying meaningful life lessons, a common trait and feature in most, if not all, folktales. Jack confronts the consequences of his actions while the couple discovers the responsibility of marriage and family. Little Red Riding Hood's (Lilla Crawford) encounter with the Wolf (Johnny Depp) carries overtones of sexual awakening, as suggested in the Grimm's tale, but of course, this being Disney, this is done more subtly than in the stage performance. Rapunzel (MacKenzie Mauzy) and her Prince (Billy Magnussen) suffer banishment and blindness, along with a new hairdo, to prove their love genuine, minus the twin babies indicating the two lovebirds got into some funny business while alone in the tower.

From a script by James Lapine, co-writer of the original stage production with Sondheim, 'Into the Woods' is for the most part faithful to the Broadway musical, not that it should really matter either way. However, one notable alteration is the comically lustful affair of the prince brothers with Snow White and Sleeping Beauty, yet the "Agony" duet of the two suave charmers (Magnussen and Chris Prine) remains and immediately becomes the film's hilarious highlight worth repeating. Since we're on the topic of certain adjustments and modifications, Cinderella (a wonderful Anna Kendrick) discovering that "happily-ever-afters" are not all they're cracked up to be is a very nice bonus while Streep's Witch tackles her bad parenting decisions, leading up to a marvelous, thunderous rendition of "Last Midnight." Admittedly, Marshall's adaptation doesn't quite have the same pizzazz and impact as the stage performance, but it nonetheless delivers a winning version of fairytales with many versions of their own.

Walt Disney Home Entertainment brings 'Into the Woods' on a Region Free, BD50 disc inside a blue, eco-elite case with a glossy cardboard slipcover. The package includes promotional flyers, information for downloading the soundtrack and a code for a Digital HD Copy. At startup, viewers can watch previews for the upcoming 'Tomorrowland' and a teaser for a Diamond Edition release of 'Aladdin' before switching to a 3D animated menu screen featuring the usual options and music.

The musical fantasy drama wanders into the Blu-ray woods with a lovely and often stellar 1080p/AVC MPEG-4 encode, but a few murky shadows during the many low-lit segments and a tad of banding in the sky keep the overall presentation from absolute perfection.

Still, the 2.40:1 image comes with comfortably bright, spot-on contrast, allowing viewers to fully take in and appreciate the amazing stage design and production. The tiniest flaw and imperfection in Jack's wooden farmhouse can be clearly made out, and the stones in the palace and Cinderella's house can be practically counted. The individual hairs on the wolf's smarmy face, as well as those in the rest of the cast, are razor-sharp while facial complexions appear healthy, and the costumes come with an excellent lifelike texture. Bold, vivid primaries brighten the screen, and accurate secondary hues provide energy and zeal. Brightness levels could be a tad stronger and more consistent, but blacks are, for the most part, deep and true, making this digital-to-digital transfer a lovely watch.

Into the woods we go with an excellent DTS-HD MA soundtrack that terrifically compliments the video. Much of the design is understandably focused on the fronts, giving the music, dialogue and singing top priority. The soundstage feels immense and broad with superb, well-balanced channel separation and fluid movement across the screen, exhibiting sharp, acoustical details in the mid-range.

Individual instruments in Stephen Sondheim's enthralling music are discrete and separate; we can distinctly hear the strings from the brass with varied richness and warmth, reaching the upper frequencies without fail or the slightest hint of distortion. Low-frequency effects add palpable texture and weight that reverberates throughout the room. Rear activity appears to be deliberately selective but no less effective, delivering subtle ambient effects between songs and creating a creepy soundscape of the nightly happenings in the woods. Overall, it's a satisfying and highly-enjoyable lossless mix.

Rob Marshall's adaptation of Stephen Sondheim's Tony Award-winning Broadway musical, 'Into the Woods,' is a delightfully-fun yarn that chaotically yet seamlessly melds four cherished folktales in one tumultuous collision. Featuring excellent performances from the ensemble cast, the film may not have the same pizzazz and impact as the stage performance, but it nonetheless delivers a winning version for fans. The Blu-ray arrives with a marvelous, near-reference audio and video presentation, but bonus features seem a bit on the light side. Still, the overall package is sure to satisfy fans while the curious will want to rent before deciding on a purchase.

Sale Price 5.99
List Price 14.99
Buy Now
3rd Party 6.99
In Stock.
See what people are saying about this story or others
See Comments in Forum
Previous Next
Pre-Orders
Tomorrow's latest releases