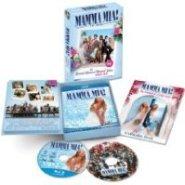 It may be uncool, but I will happily go on record saying that I like ABBA. The superswedes have concocted some great -- no, make that brilliant -- pop songs that have stood the test of time. They may have once been the '70s answer to Celine Dion (i.e., had a hip quotient of negative ten), but now it's impossible to hear classics like "Dancing Queen," "SOS," or "Waterloo" and not admire their craftsmanship, exuberance and sheer pop-ability. Yet, at the same time, there has always been a theatrical quality to ABBA's music that went unnoticed by most critics and even their ardent fans. Which is why I, for one, was not surprised when the band's catalogue of songs were used as the basis for an eventual smash stage musical, "Mamma Mia!" In hindsight it all seems obvious, a natural progression for a band whose sticky 'n' sweet pop concoctions could now easily serve as a threadbare narrative for an even more saccharine, family-friend musical theater extravaganza.

With the "Mamma Mia!" gravy train still running strong on Broadway and throughout the world, it was only a matter of time before the musical would be turned into a movie. But unlike musicals-to-movies before it that flopped (the dreadful 'The Producers' comes to mind), the big-screen version of 'Mamma Mia!' has become a true cinematic phenomenon, a movie that has grossed nearly $600 million worldwide (and counting) and once again brought ABBA's music to a whole new generation of fans. Unfortunately, unlike superior musical-to-movies like 'Hairspray,' 'Mamma Mia!' is a pretty darn awful film -- an incompetent mess that left me in awe of its absolute ineptitude.

First, the plot. Cute little Sophie Sheridan (Amanda Seyfried) lives on an isolated island with her ex-hippie mother Donna (Meryl Streep), who runs a quaint little bed and breakfast for tourists. Though Sophie is about to be married to a local stud muffin (Dominic Cooper), she's been wrecked with heartache over the absence of her father, whose identity Donna has always kept hidden. So Sophie hatches a plan: since Donna was a big ho in her youth, Sophie invites the three most likely culprits (Pierce Brosnan, Stellan Skarsgaard, and Colin Firth) to her wedding, hoping that eventually one of them will reveal himself to be dear old dad. Along the way, a host of supporting players (including Donna's aging, amorous best friends, played by Christine Baranski and Julie Walters) get involved in all the schemes and secrets, culminating in a big mountaintop wedding filled with startling surprises.

I wanted to like 'Mamma Mia!' I really did. But this film is impossible to embrace because of it's incompetence. Directed by first-timer Phyllida Lloyd (who piloted the Broadway version) and scripted by Catherine Johnson (who also penned the original stage book), 'Mamma Mia!' has to be one of the most poorly-choreographed, horribly-sung and badly-shot big-screen musicals I've ever seen. The list of cinematic offenses here is almost too long to list.

Let's start with the hideous photography. The film had the beautiful Greek isles as a backdrop, yet the filmmakers chose to shoot the majority at England's Pinewoods studios, on sets in front of blue screen, which results in an ugly, out-of-focus look to the majority of the movie. (It's like watching 'The Phantom Menace' as a musical, only with Meryl Streep instead of Jar Jar Binks.) Then there's the dancing, which has an all-over-the-place haphazardness, as if Lloyd set up a bunch of cameras, told the actors to run around and flail about wildly, and figured it would all come together in the editing. And then there is the -- oy! -- singing. The vocal deficiencies of Streep, Baranski, and most heinously Brosnan are readily apparent. I swear, when the ex-James Bond first started warbling "SOS," even my dog leapt under the couch. For god's sakes, if you're are going to hire big-name actors to sing ABBA, then couldn't you have paid for some voice lessons? Or better yet, hired real singers to dub over them?

To be fair, much of the charm of the stage version of "Mamma Mia!" lay in the silly way the ABBA tunes were incorporated into the wafer-thin story. There was fine camp appeal in waiting for the next cheesy segueway to a song, and watching how in the heck Johnson was going to snatch some sort of narrative coherence out of relatively inane tunes like "Super Trooper" or "Honey Honey." But blown up to big-screen proportions, these deficiencies go from being cute to insufferable. It feels like amateur time, and given the talent involved, it's quite dispiriting. Compared to other recent musicals, particularly 'Hairspray' and even 'High School Musical 3,' it's a shame 'Mamma Mia!' didn't receive a more skilled treatment.

Judging by 'Mamma Mia!'s worldwide grosses, however, I'm sure millions of people disagree. Perhaps the success of the film is simply inexplicable to me. Like 'Look Who's Talking' or 'My Big Fat Greek Wedding,' 'Mamma Mia!' is one of those movies where I sat in the theater feeling like an alien, with everyone around me laughing and clapping, as if they were watching a totally different movie. As much as I love ABBA, I can only recommend 'Mamma Mia!' to those who would enjoy hearing the band's music badly sung, and accompanied by dumb dancing and a totally stupid story. If that sounds like a great time to you, then by all means enjoy this Blu-ray. But I will remain content to go and spin my copy of "ABBA Gold" for the hundredth time instead. 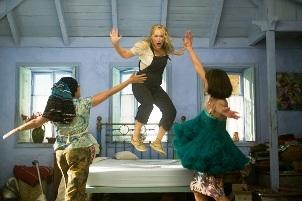 'Mamma Mia' comes to Blu-ray in a 1080p/AVC MPEG-4 transfer, framed at 2.40:1. I must admit that I saw the film in the theater and thought it had an ugly visual look. The good news is that this Blu-ray accurately recreates that experience. The bad news is that, well, the film looks ugly.

On the plus side, the source is pristine. Blacks are generally rock solid except for a couple of weird nighttime sequences where the mid-range of the grayscale is blown up to improve shadow detail but results in a flattening of the image. Otherwise, the daylight exotic exteriors benefit from the bright contrast and a good amount of apparent depth. Unfortunately, colors are overdone, which results in an ugly, waxy look (the actors are all lit terribly). Detail is sometimes strong, but the use of blue screen backdrops gives a distracting, oddly out-of-focus look that I really couldn't stand. The encode itself is strong, with no obvious artifacts save for a bit of noise on solid backgrounds. I'm giving this transfer four stars because it accurately reflects the stylistic intentions of the film, even if I really didn't enjoy looking at it. 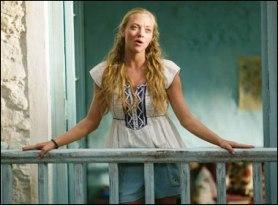 Universal offers an English DTS-HD Lossless Master Audio 5.1 Surround track (48kHz/24-bit) for 'Mamma Mia!' I found it a tad disappointing. While the track is technically sound, the mix lacks a surround presence, leaving it feeling surprisingly lifeless. (Note that there is also a "Sing-Along Version" of the film included. However, it is the same DTS-MA audio track, only with subtitles providing the lyrics to all of the film's songs. There is no true karaoke soundtrack option, aka sans vocals.)

Indeed, there is little envelopment throughout 'Mamma Mia!' We get some minor island ambiance during dialogue scenes, but otherwise the mix goes front-heavy for the musical numbers. Tech specs are generally good, however, with fine low bass and a decent sense of spaciousness and depth to the upper frequency range. I did find dialogue and the singing oddly disconnected however -- there is none of the sterling clarity of the original (and recently remastered for CD) ABBA recordings. There is also a muddled quality to the mix of non-musical and musical sequences, and the mix never felt organic and wholly natural. The DTS-MA track certainly isn't awful by any means, but I expected a soundtrack a bit more exciting than this. 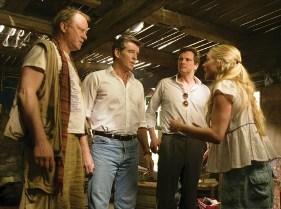 For all the 'Mamma Mia!' fanatics out there, this one's for you! While this giftset doesn't overflow with new extras, it's a great keepsake for those who can't get enough of ABBA and this romantic tribute to their music. If the flimsy, book-like packaging doesn't get too banged up during shipping or while sitting on a store shelf, it soon will, as there's not enough contents to keep it sturdy. The cover is decorated with five rhinestones, and when you press a button in the lower right corner, they begin to flash in bright blue while the film's title song briefly plays. Cheesy, but cute. All that's inside is the two-disc set, housed in a standard Blu-ray case, and a 32-page full-color, attractively designed commemorative booklet featuring a wide array of photos and lots of background, reminiscences, and perspective on the movie and ABBA from the cast, crew, and composers. Disc Two is a CD soundtrack that includes 18 ABBA songs from the movie, but be forewarned: they're sung by the cast, not ABBA. (So if you want Pierce Brosnan on your iPod singing "SOS," you'll get him.) Other than that, all the supplements from the original Blu-ray edition have been ported over, and most are in 1080i. 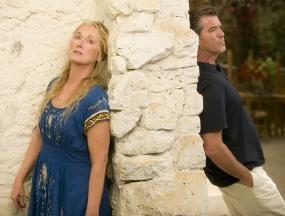 I'm sorry, I hated 'Mamma Mia!' I love ABBA, but all we get in the movie is a lame story, crappy choreography and badly-sung versions of great songs. This Blu-ray giftset edition is a winner, however, with good video and audio, a ton of extras, and a couple of cool bonus items. Any fan of the movie will love this disc, so if you're shopping for one of the millions of 'Mamma Mia!' aficionados this holiday season, this special edition just might be the perfect gift.

Sale Price 41.98
Buy Now
3rd Party 19.99
In Stock.
See what people are saying about this story or others
See Comments in Forum
Previous Next
Pre-Orders
Tomorrow's latest releases