When Max (Taissa Farmiga) and her friends reluctantly attend an anniversary screening of “Camp Bloodbath”, the infamous ‘80s horror film that starred Max’s late mother (Malin Akerman), they are mysteriously sucked into the silver screen. They soon realize they are trapped inside the cult classic movie and must team up with the fictional and ill-fated camp counselors, including Max’s mom as the scream queen, to battle the film’s machete-wielding killer. With the body count rising in scene after iconic scene, who will be the final girls left standing and live to escape this film? THE FINAL GIRLS is a genre-blending horror comedy also starring Adam DeVine, Thomas Middleditch, Alia Shawkat with Alexander Ludwig and Nina Dobrev.

'The Final Girls,' a smart and clever slasher horror comedy that's more engaging than viewers might be led to believe from reading the synopsis and previews, instantly wins bonus points — and falls into my list as one of the most underrated films of the year — for its surprisingly fantastic use of Kim Carnes's "Bette Davis Eyes." And the film makes Carnes's darkly haunting version of the Jackie DeShannon original as a poignant centerpiece that sets our heroine Max (Taissa Farmiga of 'American Horror Story' fame) into a tragic coming-of-age tale at the beginning, serving as an unforeseen foreshadowing device, and brings her emotional journey to a notably satisfying conclusion. There are other fun uses of favorite 80s tunes to enjoy throughout, but this is the first in my experience where a classic pop hit, as the lyrics "And she'll tease you / She'll unease you" plays overhead, carries the potential of bringing the audience to tears. As if the movie wasn't already a fun and oddly twisted ride to a predictable finale, this moment is the cherry on top that pays off in a highly unpredictable way.

But before I get ahead myself, I should explain this absurdist fantasy comedy follows a group of high school friends trapped inside a 1980s cult horror movie, and in order to survive a machete-wielding masked maniac, the kids must team up with the fictional camp counselors to fight back. Admittedly, the familiar concept of a character entering the movie world, one which has been explored many times over as far back as Buster Keaton's 'Sherlock Jr.,' isn't an attention grabber, but director Todd Strauss-Schulson, working from a script by actor-turned-writer Joshua John Miller and newcomer M.A. Fortin, makes it work with various witty and often inventive jabs at the very genre it also works tirelessly to extol. And as one would expect, the filmmakers are unabashedly meta, fondly showering the production with horror tropes as the butt of the joke. But while deconstructing well-known conventions, the film is at heart a love letter that strictly adheres to those conventions. The story is a complete bloodbath where the virginal good girl walks away from the massacre as the lone survivor. 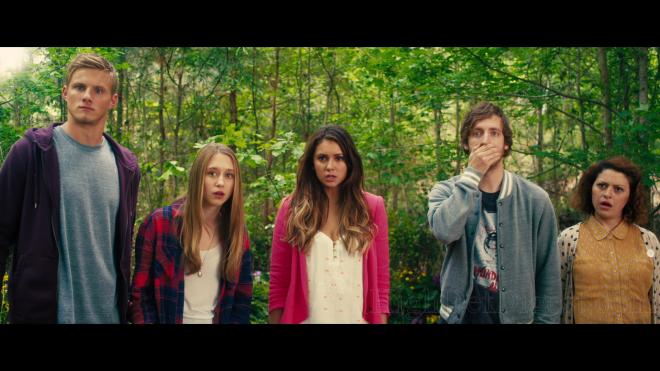 However, beneath all the tomfoolery and the zany nonsense hides a genuinely tragic and heartfelt tale of a grieving child mourning the loss of her mother. Three years earlier, Max's mother, Amanda (Malin Åkerman showing more emotion here than in other recent films), died in a car accident while lamenting her acting career forever haunted by her best-known role in the fictional film Camp Bloodbath. On the anniversary of her death, a local theater has a special screening of the now cult classic, which Max and four friends — Gertie (Alia Shawkat), Chris (Alexander Ludwig), Duncan (Thomas Middleditch) and Vicki (Nina Dobrev) — decide to attend. When a fire breaks out, they inadvertently enter the movie by literally ripping the silver screen and walking into the storyline. A couple shrewd jokes immediately set up the silly spirit of the plot — every 92 minutes, the same yellow VW Bus drives down the dirt road and Duncan recites dialogue as it's spoken — but it is a tearful Max encountering her mother in character which reveals something deeper afoot.

Coming from the same guy who gave us the surprisingly funny 3D farce 'A Very Harold & Kumar 3D Christmas,' it's reasonable to walk into 'The Final Girls' with low to average expectations. In fact, I would probably recommend it — making all my above comments rather moot, I know. The plot is sure to hook loyal genre fans from the start, and once we buy into the premise with all its absurdity and deconstruction of familiar tropes, the real story slowly exposes itself, providing the silliness a satisfying gravitas in spite of a couple discrepancies — Warrant's "Cherry Pie" is a glaring anachronism! It also features strong performances and an earnest chemistry between Farmiga and Åkerman, who lovely ladies adding some heart-rending weight. Bestrewed with excellent special effects that make clever use of habitual editing techniques seen in horror movies, cinematographer Elie Smolkin shows a talent for digital photography, dressing the frame with a sumptuous array of colors and subtle creative touches. The final showdown against the masked maniac alone is a visual sight to behold, delivering the thrills with a palette perfectly matching the story's emotional tone.

Sony Pictures Home Entertainment brings 'The Final Girls' to Blu-ray on a Region Free, BD50 disc housed inside a blue, eco-elite case. After several skippable trailers at startup, viewers are taken to a screen with the usual options along the bottom, full-motion clips and music in the background.

The final girls slash and survive their way to Blu-ray with a highly-detailed 1080p/AVC MPEG-4 encode that reveals every nook and cranny of the cabin and surrounding campsite. Shot on the Red Epic camera system, we can clearly make out the grain and the tiniest imperfections in the wood and minor blemishes in the furniture. Individual hairs, even on the little bit atop Billy's scarred head, are as razor sharp and distinct as the threading in our protagonists' sweaters and the hideously yellow polo shirts of the camp counselors. Even the stitching along the side of the "mom's" blue shorts and Billy's tattered outfit are plainly visible in every scene. Facial complexions come with lifelike textures with close-ups, especially, revealing every pore and wrinkle in the cast, and one can practically count the freckles on the faces of Alia Shawkat and Tory N. Thompson.

Presented in a 2.40:1 aspect ratio, the video thankfully doesn't come with that unattractive sterilized appearance with often plague other movies shot on high-def cameras. This is largely thanks to the excellent cinematography of Elie Smolkin, who apparently did much of the color grading and lighting in post-production with computers. While a few segments deliberately look aged and worn, much of the presentation is clean with a palette that leans towards the warmer hues while still delivering deeply rich black levels, giving the image an attractive film-like appeal, despite the lack of grain. Primaries are richly saturated and quite vivid, especially the reds and greens, which is the only area that reminds viewers of the film's digital origins. Contrast is slightly subdued and controlled, but whites remain brilliant and crisp, making for a fantastic high-def transfer.

The slasher comedy sets up camp on Blu-ray with a rousing and often electrifying DTS-HD Master Audio soundtrack that'll have the listener feeling as though trapped in some cheap 80s horror flick.

A very broad and spacious front soundstage comes a wide array of sounds, delivering lots of convincing off-screen activity that nicely keeps the viewer engaged. Much of this happens when the characters finally enter the Camp Bloodbath reality where a variety of noises, like birds chirping or leaves rustling in trees, consistently fill the entire soundscape. Occasionally, they lightly bleed into the surrounds to extend the soundfield, but for the most part, the fun remains in the fronts, exhibiting excellent channel separation, fluid movements across all three channels and a detailed, extensive mid-range that maintains outstanding clarity during the film's loudest segments. Vocals are distinct and precise throughout, never drowned out by the absurdity and craziness, and the low-end is highly responsive and weighty with a couple palpable ultra-low moments (bass chart). Although rear activity is largely silent, the speakers are employed in a few choice sequences, particularly the final showdown in the movie's last quarter, and mostly reserved for the immersive musical score.

From the same director who gave us the funny third installment in the 'Harold & Kumar' franchise, 'The Final Girls' is a smart and clever slasher horror comedy. Although featuring an all too familiar premise that's frankly rather tired and clichéd, the film genuinely surprises with a tragic and heartfelt tale hiding beneath all the tomfoolery and the zany nonsense, making for a highly amusing horror comedy. The Blu-ray arrives with near-reference picture quality and an excellent audio presentation that's sure to please fans. Though it comes with an unfortunately small set of bonus features, the overall package is still worth a look for the curious and recommended for cult genre collectors.

Sale Price 14.99
List Price 19.99
Buy Now
3rd Party 9.21
In Stock.
See what people are saying about this story or others
See Comments in Forum
Previous Next
Pre-Orders
Tomorrow's latest releases