Before you see the remake, watch the original. The 1947 version of Nightmare Alley stands as one of Hollywood's most searing film noirs and contains a dynamic change-of-pace performance from Tyrone Power. The chronicle of a narcissistic carnival barker's meteoric rise and inevitable decline still packs a potent punch, and Criterion's superior Blu-ray presentation brings all of the nastiness to brilliant life with a delectable video transfer, solid audio, and a bounty of supplements. Highly Recommended.

Like many actors and directors, Tyrone Power came back from World War II a changed man. No longer content to portray dashing, shallow swashbucklers or light romantic leads, the pride and joy of 20th Century-Fox sought roles with more depth, meaning, and ambiguity after his return from combat. His first post-war film, an adaptation of W. Somerset Maugham’s soul-searching novel The Razor’s Edge, gave him a meaty part, but the character Power ached to play - a cocky, narcissistic carnival barker who uses his good looks, sexual magnetism, and sly wiles to become a famous nightclub mentalist - threatened to tarnish the upstanding, heroic persona the studio had meticulously cultivated for its golden boy over the past decade.

Risking Power's popularity made Fox head honcho Darryl F. Zanuck very nervous, but Power's passion for Nightmare Alley, a bleak, sordid tale of grifters, charlatans, and ruthless opportunists, eventually swayed him to green-light the project against his better judgment. Though the jittery Zanuck would prematurely pull the film from theaters after it failed to generate much buzz, Nightmare Alley earned critical kudos and later developed a devoted cult following that helped loft this icy thriller into the rarefied ranks of classic film noir. 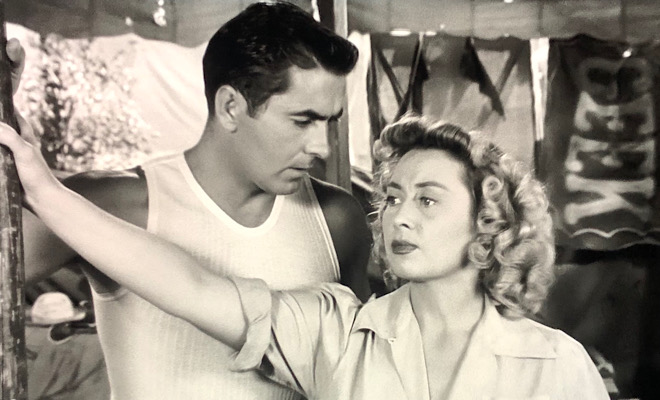 "I can't understand how anybody could get so low," says carny newcomer Stan Carlisle (Power) when he witnesses the grotesque and pathetic sideshow attraction The Geek in a drunken after-hours frenzy. The lowest life form on the carnival food chain, Geeks were hired to cut off the heads of live chickens and drink their blood in a grisly act that would earn the deadbeat sots as much liquor as they could stomach and a cozy nook to sleep off the effects. The Geek disgusts the arrogant Stan, whose dreams of grandeur take flight after he catches the roving eye of resident psychic “Mademoiselle Zeena” (Joan Blondell), whose alcoholic husband Pete (Ian Keith) can no longer reliably assist her.

Stan seduces the willing Zeena and convinces her to teach him the complex vocal code Pete uses to transmit vital information to his blindfolded wife during their performances so she can dazzle her unsuspecting audiences with her "telepathic" powers. It’s a clever ruse that Stan perfects after Pete dies following a bender Stan not-so-innocently instigated.

Unaware of his involvement in Pete's death, Zeena fosters a solid and successful partnership with Stan, but the self-absorbed ingrate soon two-times her with the pretty, naive, oh-so-worshipful Molly (Coleen Gray), a young carnival performer who can't resist his dazzling aura. With Molly's help and the code he pilfered from Zeena, Stan zooms to dizzying heights, eventually attaining headliner status at one of Chicago's poshest nightclubs. As Stanton the Great, he begins hobnobbing with - and swindling - his ultra-rich patrons who believe he can summon from the dead their beloved friends and relatives, yet when success goes to his head and he falls under the spell of Lilith (Helen Walker), a sexy, manipulative psychologist, Stan's charmed life suddenly becomes jinxed. 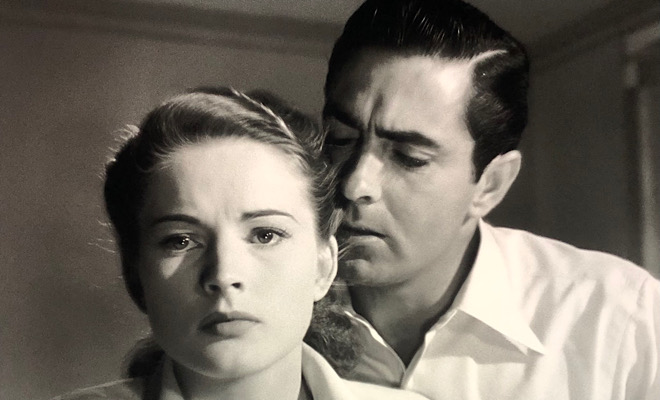 A smooth operator, unrepentant lothario, and moral vulture who preys on the frailties of others, Stan gave Power the rare opportunity to exploit the dark side of his own beauty and allure. It's a slimy part, but Power, who rarely if ever exuded more machismo, embraces all the unsavory elements without overplaying them. Hands down, Nightmare Alley stands as Power's best work (the actor himself cited Stan as his all-time favorite role), but that's not surprising considering the array of cardboard characters Zanuck forced him to portray during a far-too-brief 20-year film career that abruptly ended when he died of a heart attack in 1958 at age 44 while shooting Solomon and Sheba. (Yul Brynner replaced him.) It's too bad Fox gave Power so few chances to flex his acting muscles, but for so many hunks in Hollywood's Golden Age, it was difficult - if not impossible - to be anything else.

Nightmare Alley also marked a departure for director Edmund Goulding, best known for helming four Bette Davis movies, including Dark Victory, and the glittery all-star drama Grand Hotel. Often labeled a woman's director, Goulding seems to relish depicting the gritty carnival environment and showcasing both a strapping male specimen and gallery of quirky characters. He also applies a slick veneer to Nightmare Alley that cleverly complements the insidious air of chicanery swirling about the story, courtesy of a lyrical screenplay by the prolific Jules Furthman, who also scripted such classics as Mutiny on the Bounty, To Have and Have Not, The Big Sleep, and Rio Bravo, among many others. 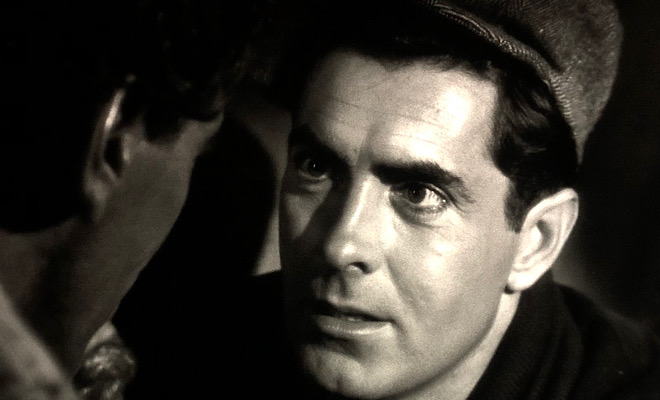 Power carries the film with ease, but Nightmare Alley would be far less intriguing and memorable without its stellar supporting cast led by three pivotal women. Blondell, who spent the 1930s playing wisecracking dames at Warner Bros, began transitioning into character parts in the mid-1940s and brings a refreshing earthiness to Zeena that meshes well with Power's raw sexuality. (She steals every scene in which she appears.) The fresh-faced, natural Gray, in only her second billed role, nicely balances wide-eyed innocence with the easygoing air of an experienced carnival girl who knows how to handle herself and the roughnecks around her, while the irresistible Walker, who doesn't appear until the movie's second half, makes a huge impression as one of noir's frostiest Femme Fatales. Her throaty voice, pouty demeanor, and deadpan delivery evoke Lauren Bacall, but Walker kicks it all up a notch with a duplicitous portrayal that throws gasoline on an already fiery film. Watching her dissect and unravel the supercilious Stan is one of Nightmare Alley's many joys, and her fine work elevates Power's performance as well.

Keith also files a touching performance as the noble yet pitiful Pete and the hulking Mike Mazurki, who enlivened countless movies with his imposing presence and tough yet tender demeanor, adds some spice and muscle as Molly's overbearing carnival cohort and protector. Both men provide a stark contrast to Power's teflon glamor and glib nature and bring soulful accents to this hard-edged film.

In this age of misinformation, false truths, and conspiracy theories, Nightmare Alley still strikes a chord...so much so, writer-director Guillermo del Toro has chosen to re-adapt William Lindsay Gresham's acclaimed novel with an all-star cast that includes Bradley Cooper, Cate Blanchett, Rooney Mara, and Willem Defoe. (The film will be released in December 2021.) Whether Del Toro's vision will help his version eclipse the original remains to be seen (I'm all but certain he'll drop the tacked-on hopeful ending Zanuck demanded), but whether the remake is a blockbuster or a dud, the 1947 version of Nightmare Alley always will be regarded as one of the all-time great film noirs and Tyrone Power's finest hour. It's just a shame Power didn't live long enough to see this impeccably mounted movie gain the recognition and respect it always deserved. 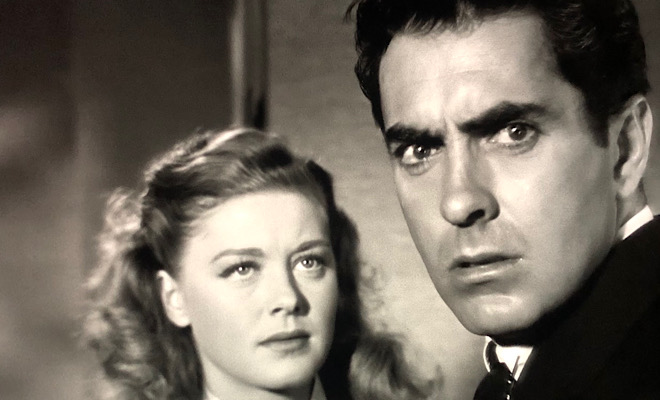 Vital Disc Stats: The Blu-ray
Nightmare Alley arrives on Blu-ray packaged in a standard Criterion case. A 12-page fold-out booklet featuring an essay by Kim Morgan (who co-wrote the screenplay for the 2021 Nightmare Alley remake with Guillermo del Toro), tinted scene stills, a cast and crew listing, and transfer notes is tucked inside the front cover along with reproductions of six tarot cards used in the film. Video codec is 1080p/AVC MPEG-4 and audio is LPCM mono. Once the disc is inserted into the player, the static menu with music immediately pops up; no previews or promos precede it.

A 4K scan from a 35 mm nitrate composite print yields an often breathtaking 1080p/AVC MPEG-4 transfer that faithfully honors the lush cinematography of Lee Garmes. Grain levels fluctuate, making some scenes appear a tad soft, but the overall image looks incredibly film-like. Clarity, contrast, and shadow delineation are uniformly excellent, while inky blacks combine with bright, stable whites and a beautifully modulated grayscale to produce a balanced yet vibrant picture that enhances the seedy carnival atmosphere and nefarious goings-on. Close-ups are especially striking and showcase Power's dark eyes, flawless complexion, and undeniable glamor. The picture is so crisp you can see the lines streaking his bloodshot eyes and almost feel the slickness of his gelled, jet-black hair. Just a couple of errant specks dot the print and no digital anomalies intrude. Nightmare Alley has never looked better on home video, and for the movie's diehard fans, that's a dream come true.

According to the liner notes, "The original monaural soundtrack was remastered from a 35 mm nitrate composite print with a variable-density track from the Disney/Fox Collection at the UCLA Film & Television Archive." The result is a robust track that produces clear, well-modulated sound. Sonic accents like sirens, truck and outboard motors, and honking horns are wonderfully distinct and a wide dynamic scale handles all the highs and lows of Cyril Mockridge's melodramatic music score without any distortion. All the dialogue is easy to comprehend, and other than some very faint surface noise during a few prolonged silences, the track is free of any age-related defects.

If you think you know Tyrone Power, think again. The swashbuckling matinee idol flips his glamor-boy image on its ear in Nightmare Alley and the result is arguably his best performance in one of Hollywood's finest film noirs. Criterion honors director Edmund Goulding's stylish and seedy character study with a glorious remastered transfer, excellent audio, and an array of absorbing supplements. Highly Recommended.