To Have and Have Not

Help the Free French? Not world-weary gunrunner Harry Morgan (Humphrey Bogart). But he changes his mind when a sultry siren-in-distress named Marie asks, "Anybody got a match?" That red-hot match is Bogart and 19-year-old first-time film actress Lauren Bacall. Full of intrigue and racy banter (including Bacall's legendary whistling instructions), this thriller excites further interest for what it has and has not. Cannily directed by Howard Hawks and smartly written by William Faulkner and Jules Furthman, it doesn't have much similarity to the Ernest Hemingway novel that inspired it. And it strongly resembles Casablanca: French resistance fighters, a piano-playing bluesman (Hoagy Carmichael) and a Martinique bar much like Rick's Cafe Americaine. But first and foremost, it showcases Bogart and Bacall, carrying on with a passion that smolders from the tips of their cigarettes clear through to their souls.

"Anybody got a match?"

That innocuous yet incendiary question marked the first words of on-screen dialogue uttered by the smoky-voiced Lauren Bacall, introducing her not only to the moviegoing public, but also her best-known co-star and future husband, Humphrey Bogart. The film was 'To Have and Have Not,' director Howard Hawks' (very) loose adaptation of what many regard as Ernest Hemingway's worst novel. And though the line would be eclipsed by a far more provocative come-on she would suggestively purr a couple of reels later ("If you want me, just whistle. You know how to whistle, don't you, Steve? You just put your lips together and…blow"), it lit a fuse that would fuel both Bacall's multi-decade career and a storied romance that still captivates today.

Just 19 at the time, Bacall had never acted before and by all accounts was nervous as hell, but the 44-year-old Bogart put her at ease. The two soon became inseparable, and one of Hollywood's greatest romances - and box office bonanzas - was born. The couple wed less than a year later in the spring of 1945 and remained married until Bogart's death from cancer in 1957. The union spawned two children and four films, all of which are bona fide classics. Whether 'To Have and Have Not' is the best of the bunch remains open for debate, but there's a playful innocence emanating from it that the other, more serious Bogart-Bacall movies lack. Moments of joy come at a premium in 'The Big Sleep,' 'Dark Passage,' and 'Key Largo,' but they're strangely abundant here, and enhance the movie's charm.

Strip away the Bogart-Bacall angle and 'To Have and Have Not' is really just a thinly veiled retread of 'Casablanca' with more sex and fewer memorable lines. Viewers at the time didn't particularly care, but the myriad similarities - which don't at all limit the picture's appeal - are worth noting. Both films are set during World War II in an exotic locale populated by displaced persons seeking a way out. Both feature an underground Free-French faction that hopes to challenge the Vichy government, and a neutral, cynical hero who doesn't want to get involved but eventually takes up the cause, presumably for personal gain. There's also local political intrigue and corruption in both movies and a noble, freedom-fighting French couple that needs protection, as well as a lively saloon where much of the action transpires and a jaunty piano player who sings a couple of good-time tunes. There's even a rotund adversary who's named Captain Renard instead of Captain Renault and cleverly combines the physique of Sydney Greenstreet with the eloquence of Claude Rains. And those are just the ones I can think of off the top of my head!

The major differences? The plot gets wrapped up in a tidy bow and this time Bogie gets his girl.

Bogart plays Harry Morgan (no relation to the 'M*A*S*H' actor of the same name), a boat captain who takes tourists on fishing expeditions off the coast of Martinique. Bacall is Marie, an aimless young woman with unspecified plans who's broke and stranded on the island. They meet by chance in a bustling café when he spies her swiping the wallet of one of his deadbeat clients. There's an instant attraction. She calls him Steve (we don't know why), and he calls her Slim. They banter, flirt, and help a radical faction organize an effort to fight back against the Axis.

The blush of new love definitely propels the tale (the Bogart-Bacall chemistry is more interesting than the story), and Hawks' decision to veer (far) away from Hemingway's novel bolsters its appeal. Only the bare framework of the original story is retained, and the script, much like 'Casablanca,' was extensively rewritten even while the film was in production. (An interesting side note… The abandoned shootout climax would oddly and ironically wind up in 'Key Largo' four years later and provide that somber film with the type of slam-bang finish it craved.) Somehow, Hawks makes this hodgepodge work, and deserves a lot of credit for doing so.

Walter Brennan gives a typically spirited performance as Bogart's devoted, alcoholic, and totally unnecessary sidekick and musician Hoagy Carmichael adds some low-key charm as Bacall's deadpan bar chum, but 'To Have and Have Not' only really comes alive when the two stars share the screen. Reportedly, the womanizing Hawks was jealous of Bogart during shooting because Hawks was also attracted to Bacall and hoped to have a relationship with her (he got over it by dallying with Dolores Moran, the film's second female lead, instead), but he was smart enough not to let his personal feelings stand in the way of exploiting the couple's undeniable romantic attraction, which is what really sells this film.

Not nearly as pure on screen as Ingrid Bergman, Bacall seems a more suitable mate for the gruff, weathered Bogart. You can picture them boozing it up, trading barbs, knocking each other around, and cozying up by the fire. Her acting may be stilted, but her sassy attitude ("It's even better when you help," she quips after their second kiss), undeniable sex appeal (watch her swing her hips as she walks out of the bar in the final scene), and smoldering glances make her an instantly mesmerizing presence. Bogart isn't used to aggressive dames, but Bacall takes charge and stands up to him, and in the process, helps him further refine the sensitivity he so winningly displayed in 'Casablanca.'

With apologies to Claude Rains and Captain Renault, 'To Have and Have Not' marks the beginning of a beautiful friendship - and love affair - between Bogart and Bacall. Their four movies together were released over a period of only four years, but they remain timeless, still evoking the same excitement, glamour, and magnetism they did seven decades ago. Screen teams come and go, but only a handful - Astaire and Rogers, Tracy and Hepburn, Newman and Woodward, Taylor and Burton - endure. Bogart and Bacall are chief among them, and 'To Have and Have Not' lets us be a fly on the wall watching their potent chemistry mix, percolate, and bloom. The movie is good, but they are magic. 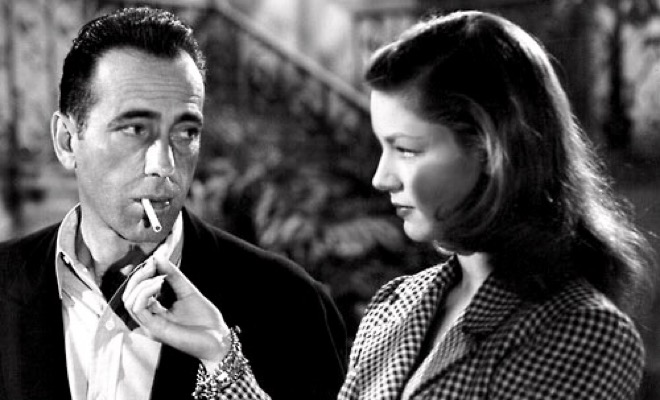 'To Have and Have Not' arrives on Blu--ray packaged in a standard case. Video codec is 1080p/AVC MPEG-4 and audio is DTS-HD Master Audio 2.0 mono. Once the disc is inserted in the player, the static menu with music immediately pops up; no previews or promos precede it.

Newly remastered and rescued from extinction, 'To Have and Have Not' looks like a million bucks on Blu-ray. Warner Archive's 1080p/AVC MPEG-4 transfer is a joy to behold from beginning to end, sporting exceptional clarity, terrific contrast, and a lovely grain structure that preserves the film-like feel of this 72-year-old classic. Black levels are rich and lush, shadow delineation is superior, and a nicely varied gray scale heightens depth and brings fine details to the forefront. Sharp close-ups highlight Bacall's smoldering allure and Bogart's rugged persona, and only a couple of age-related nicks dot the print. Painted backdrops and soundstage sets are more obvious due to the picture's enhanced clarity, but that's a small price to pay for such a smooth, elegant rendering. All the Bogart-Bacall Blu-ray transfers have been superior efforts, and this one is the icing on a very delicious cake.

Crisp and clear, the DTS-HD Master Audio 2.0 mono track supplies well-modulated sound that's free of such age-related annoyances as hiss, pops, and crackles. Sonic accents like gunfire and the rumbling boat motor are cleanly rendered, while such subtleties as the crinkling of a cigar wrapper and strike of a match are wonderfully distinct. Hoagy Carmichael's intimate bar tunes exude a velvety lushness and the music score by the uncredited Franz Waxman fills the room with ease, thanks to a wide dynamic scale that perfectly balances all the highs and lows and prevents distortion from creeping into the mix. This track won't knock your socks off, but it complements the action well...and that's all we can ask of it.

All the supplements from the previous DVD have been ported over to this Blu-ray release.

The first Bogart-Bacall movie is the last to see a Blu-ray release, but 'To Have and Have Not' has been worth the wait. Though it may be a retread of 'Casablanca,' this kitchen-sink mix of romance, political intrigue, propaganda, light comedy, and suspense keeps us entertained, but it's the chemistry between Bogie and his Baby that makes it memorable. Rarely have sparks flown so plentifully between two actors and continued to combust over the ensuing decades, but this couple continues to sizzle more than 70 years after the film's release. Warner Archive's Blu-ray presentation features a gorgeous new transfer, solid audio, and all of the supplements from the 2003 DVD, making it a no-brainer upgrade for fans. It may not be the best Bogart-Bacall flick, but it's definitely a movie "to have," and earns a hearty recommendation.

Sale Price 17.99
Buy Now
3rd Party 14.95
In Stock.
See what people are saying about this story or others
See Comments in Forum
Previous Next
Pre-Orders
Tomorrow's latest releases