Screen legend Tyrone Power stars in this engaging classic based on W. Somerset Maugham's best-selling novel. Despite being offered an impressive job when he returns from World War I, Larry Darrell (Power) instead opts for the Paris bohemian lifestyle, followed by a soul-searching trip to the Far East. After his beautiful fiancée (Gene Tierney) loses patience with the spiritual seeker and marries a wealthy man, Larry finds himself drawn to Sophie (Anne Baxter in an Oscar-winning performance), an old friend. Newly widowed, Sophie has descended into alcoholism, a state from which Larry hopes to save her in this thought-provoking film Nominated for four Academy Awards, including Best Picture.

"The road to salvation is difficult to pass over; as difficult as the sharp edge of a razor."

More than any other mogul during Hollywood's famed Golden Age, 20th Century-Fox studio chief Darryl F. Zanuck sought to bring thought-provoking, socially conscious, and meaningful fare to the screen. Some of these "prestige" pictures, such as the Oscar-winning 'Gentlemen's Agreement,' achieved great critical and popular acclaim, yet others, like his well-intentioned, elegantly appointed, and languorously paced 'The Razor's Edge,' miss their mark. Edmund Goulding's sumptuous adaptation of W. Somerset Maugham's bestselling novel boasts a star-studded cast, impeccable production values, and technical grace, but for a movie that chronicles one man's search for his soul, it's surprisingly soulless. The screenplay by Lamar Trotti (who won an Oscar the previous year for 'Wilson') sucks the guts out of Maugham's story and trivializes its message, while the breathtaking beauty of both Tyrone Power and Gene Tierney overshadows the finer points of the plot. Deep ideas are buried beneath the drivel, but we have to wade through a lot of shallow water to find them.

After serving in World War I, Larry Darrell (Power) returns to his affluent Chicago home a changed man. Saved from death by a fellow soldier who sacrificed himself to rescue him, Larry now views the world differently and hopes to use his "second chance" to unlock life's mysteries. Larry's reflective attitude puzzles his materialistic socialite girlfriend, Isabel Bradley (Tierney), who's crazy in love with him but can't understand his lack of ambition, rejection of wealth, consuming introspection, and obsessive need to discover the meaning of human existence. In a rare act of nobility, Isabel indulges Larry's need to find himself, but after a year apart she loses patience and marries the more suitable (and stable) Gray Maturin (John Payne), son of an industrial magnate.

Meanwhile, Larry seeks solace and knowledge in India, and with the help of a Himalayan guru at last gains spiritual enlightenment and inner peace. With a newfound sense of serenity, he settles in Paris, where he runs into Isabel and Gray, who went bankrupt in the 1929 stock market crash and still suffers the debilitating effects of a nervous breakdown. The couple now lives off the generosity of Isabel's rich, haughty uncle, Elliott Templeton (Clifton Webb), whose incisive wit betrays his thinly veiled disdain for humanity. Isabel still pines hopelessly for Larry, but he's consumed with helping their tormented childhood friend, Sophie MacDonald (Anne Baxter), who's descended into alcoholism and drug addiction after her husband and baby were killed in a car accident. Like a stoic prophet, Larry quietly wanders amid these troubled expatriates, but despite his altruistic efforts, he may not be able to save them...if any of them hope to be saved at all.

Interestingly, Maugham viewed his novel as a comedy, but there's very little humor in the film adaptation. (Only the stuffy, snobbish Elliott, who often resembles Webb's iconic Waldo Lydecker in 'Laura,' provides a hint of jocularity.) The cold, aloof characters are difficult to embrace, and even the sympathetic Sophie seems too carefully and stiffly drawn to supply the deep emotional underpinning the movie craves. As 'The Razor's Edge' progresses, Larry looms ever larger as a Christ figure, but Power lacks the spiritual depth necessary to successfully pull off such a comparison. He and Tierney, however, are two of the most gorgeous physical specimens ever to grace the screen, and their beauty often preoccupies us, making it difficult to concentrate on the narrative's underlying themes. Cinematographer Arthur Miller photographs them about as lovingly as any cameraman could, and their breathtaking close-ups almost beg to be frozen, so we can drink in the perfection of their features and reflect on a bygone era when glamour reigned supreme.

Sadly, their performances don't live up to their allure. (How could they?) In his first post-World War II film after a three-year absence, Power sports a newfound maturity and adopts a more serious air, but his insouciant charm and dashing good looks keep him firmly ensconced in the leading man category and preclude him from achieving the title of actor. Power walks the walk with ease, but has trouble talking the talk, and his repeated attempts to convey a sense of peace only make him look ever more blank and bland. Larry is supposed to be the glue that holds the story together, but Power's loose grip on his character prevents him from properly performing his task. Tierney does much better in a more colorful role, nicely evolving from heroine to bitch over the film's lengthy course. The actress, who suffered from emotional issues throughout her life, seems better able to identify with her frosty, manipulative character and exhibit her subtle complexities and neuroses than her more wooden and self-conscious co-star.

Baxter won a Best Supporting Actress Oscar for her portrayal of the emotionally bruised, self-destructive Sophie, although her performance seems a bit studied and stylized today. While Webb (who was nominated for Best Supporting Actor, losing to double-amputee Harold Russell in 'The Best Years of Our Lives')  tries his best to perk up the proceedings, Payne - who a year later would tackle his most memorable role in the perennial holiday favorite 'Miracle on 34th Street' - does what he can with a thankless part, Elsa Lanchester enjoys a lovely cameo late in the picture, and, in an odd bit of casting, Herbert Marshall lazily impersonates Maugham, who both narrates and pops in and out of the story. The vibrant personalities help maintain interest, but Goulding's leisurely pacing and the talky nature of the script short-circuit much of the material's electricity. 'The Razor's Edge' is never boring per se, but dull stretches abound.

Maugham remains one of Hollywood's most popular authors. Even though his works pre-date the 1950s, his vividly drawn characters, intriguing plots, and provocative themes still stoke the senses today. (The most recent Maugham adaptation, the 2006 version of 'The Painted Veil,' with Edward Norton, Naomi Watts, and Liev Schreiber, is a personal favorite of mine and begs for a Blu-ray release.) 'The Razor's Edge,' however, despite its opulence, grace, and four Oscar nominations, including one for Best Picture, falls short of expectations. A stronger director might have been able to endow the story with more power and a greater sense of meaning, but Goulding, who specialized in so-called women's pictures (he also directed the Oscar-winning 'Grand Hotel' in 1932, but never received an Academy Award nomination himself) concentrates more on artistry and mood than the potent themes running through the tale. As a result, a movie that's full of style, beauty, and notable actors is largely devoid of impact.

As Larry Darrell himself might say, "What a waste." 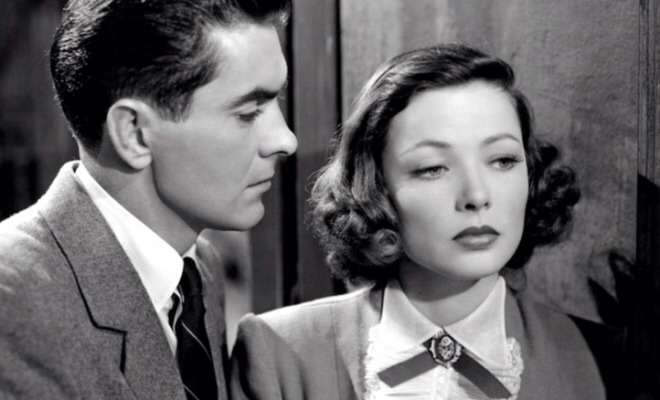 The 1946 version of 'The Razor's Edge' arrives on Blu-ray packaged in a standard case. Video codec is 1080p/AVC MPEG-4 and default audio is DTS-HD Master Audio 1.0. Once the disc is inserted into the player, the static menu with music immediately pops up; no previews or promos precede it.

Several years ago, 'The Razor's Edge' premiered on DVD as part of the now defunct Fox Studio Classics Series, and this 1080p/AVC MPEG-4 transfer looks as if it's merely a high-def version of that rendering. Pleasing clarity and contrast levels, as well as a finely woven grain structure that replicates the feel of celluloid, produce a slick, watchable image, but the source material shows some noticeable wear, with a fair amount of faint nicks and scratches dotting the print. Fox spared little expense mounting 'The Razor's Edge,' but a dullness often pervades the picture that belies its hefty price tag. Even the scenes set on the sunny Riviera and in the heights of the Himalayas (who cares if they were actually shot on a Hollywood soundstage) lack the vibrancy such dramatic locales demand. Blacks are rich (the gentlemen's evening jackets look especially inky), whites are crisp, and good shadow delineation keeps crush at bay most of the time. Though the image quality may be spotty, close-ups are uniformly superb, capturing the iconic glamour of both Power and TIerney, the weathered visage of Clifton Webb, and Anne Baxter's decay. This transfer may fall short of fans' expectations, but the film's inherent beauty, a product of the lush cinematography of Oscar-winner Arthur Miller, still manages to shine through.

The DTS-HD Master Audio mono track outputs clear, well-modulated sound. No distortion creeps into the mix, and no age-related defects, such as hiss, pops, and crackles, crop up either. Excellent fidelity and tonal depth distinguish the lush strains of Alfred Newman's romantic score, which fills the room with ease, and all the dialogue, most of which is delivered in measured, soft-spoken tones, is easy to comprehend. Ambient effects like rain and crashing waves nicely augment this vintage track, which sounds far younger than its advanced age.

Both of the supplemental features from the Studio Classics Series DVD have been ported over to this Blu-ray release. A retrospective featurette would have been a nice bonus, but no such luck.

Beauty is only skin deep, or so the saying goes, and despite lofty intentions, eye-popping production values, and a substantive, meaningful story by one of the world's most renowned authors, the ambitious film version of 'The Razor's Edge' fails to go far enough beneath the surface to wield the necessary degree of impact to make it resonate. Tyrone Power and Gene Tierney may personify Hollywood glamour, but his wooden performance and her icy demeanor contribute to the movie's prevailing stiffness, and the indulgent length and leisurely pacing often try one's patience. And yet some marvelous moments highlight this tale of a man's spiritual journey and the troubled souls with whom he interacts. 'The Razor's Edge' isn't one of Fox's finest classic Blu-ray presentations - the audio is strong, the video leaves a bit to be desired, and supplements are thin - but those who enjoy esoteric literary adaptations and the magnetism of great Golden Age stars still might want to check out this elegant, intriguing film that might best be classified as a noble failure.