Solidifying his status as Hollywood's #1 male star, Clark Gable is first officer Fletcher Christian, whose will to obey erodes under Bligh's tyranny. And Franchot Tone plays idealistic midshipman Byam, torn by his allegiance to both. T hat all three portrayals are vividly memorable is accented by the fact that for the only time in Oscar history, three stars from the same film were Best Actor nominees. 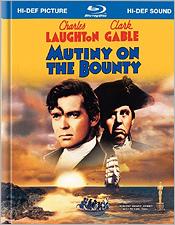 One of the first great sea epics to come out of Hollywood, the original 'Mutiny on the Bounty' dazzled Depression-era audiences with its scope, action, and adventure, and it holds up mighty well today. The virility and confidence of Clark Gable's Fletcher Christian matched against the scowling sadism and unbreakable will of Charles Laughton's Captain Bligh create a taut dramatic thread that enlivens this historical tale. Their crackling confrontations almost upstage the thrilling storm sequences, fight scenes, and native pageantry, all of which help lend the film its muscular feel. Though director Frank Lloyd is now a forgotten figure, the two-time Oscar winner (for 1929's 'The Divine Lady' and 1933's 'Cavalcade') crafts a sweeping yet incisive portrait of life at sea, tyranny, rebellion, and retribution that won the 1935 Best Picture Academy Award and garnered seven other nominations.

Based on actual events that transpired in 1787, 'Mutiny on the Bounty' combines elements from the first two novels in Charles Nordhoff and James Norman Hall's 'Bounty Trilogy' that chronicle the ship's fateful voyage from Portsmouth, England to the South Pacific, and the ensuing renegade incidents that forever altered the lives on board. Ruled by the dictatorial hand of Bligh, who enforces his motto – "Discipline's the thing" – with an almost diabolical relish, the ship's crew endures more than its share of hardship and derision, and almost buckles under the strain, before mounting a controversial mutiny led by first officer Christian, who recognizes Bligh's genius but can't abide his tactics. "I've never known a better seaman," Christian says, "but as a man, he's a snake." The Bounty crew casts Bligh and several loyal followers adrift on a rowboat to face almost certain death while they take the Bounty back to Tahiti. There, they indulge in the freedoms and pleasures so cruelly denied them for more than a year. Yet the cost of their actions proves high, and soon the mutineers must face tough decisions regarding the future course of their existence.

'Mutiny on the Bounty' was one of a string of high class literary adaptations MGM produced in 1935. 'David Copperfield,' 'Anna Karenina,' and 'Ah Wilderness' also premiered that year, and 'A Tale of Two Cities' was being readied for the cameras. All were immense popular and critical successes, but 'Mutiny on the Bounty' grabbed more box office dollars (it was the year's highest grossing film) and more Oscar nominations than all four pictures combined. Part of the reason undoubtedly lies in the deft blending of spectacle and conflict, exotic setting, and hint of taboo romance. Rarely does such a macho film possess such wide appeal, yet Lloyd's artistry, attention to detail, and storytelling ability put the movie in a class of its own. With vigorous brushstrokes, Lloyd paints an involving portrait, putting viewers in the thick of the action while maintaining a core sense of realism that sparks a gamut of emotional responses, from disgust and horror at Bligh's treatment of the crew to empathy and respect for their perseverance and guts.

The performances also go a long way toward realizing Lloyd's vision. Gable, who was forced to shave his trademark mustache for the role for historical accuracy, reportedly did not want to play Christian, fearing the character's costume, hairdo, and subservient position would compromise his masculine image. His portrayal, however, which forced him to expand his range, ranks among his best work, despite his glaring lack of an English accent. Laughton, fresh from both his Oscar-winning turn as another British dictator, King Henry VIII, and poet Elizabeth Barrett's domineering father in 'The Barretts of Wimpole Street,' often overshadows Gable, but his showier role demands a larger-than-life interpretation. Though his omnipresent frown, stiff strut, and petulant line-readings would be ceaselessly imitated and lampooned for years afterward, his dynamic, cantankerous performance still impresses. Laughton was one of the few actors of his day who could literally transform himself into whatever character he was assigned, and here he perfectly embodies the blustery Bligh, engendering at first hatred and later, almost unbelievably, admiration. It's a tricky tightrope of a role and Laughton flawlessly navigates it.

Both Gable and Laughton received Best Actor Oscar nominations for their roles, as did the underrated Franchot Tone, as the naïve and idealistic Midshipman Byam, who detests Bligh's attitude and methods, but refuses to abandon his code of ethics to join the mutineers. Tone, who's better known today as one of Joan Crawford's husbands than for any of his acting jobs, files a sensitive, natural portrayal that resonates throughout the film and provides 'Mutiny on the Bounty' with its moral core. Never again would three performers from the same film receive Best Actor nominations, and it's difficult not to speculate over whether this unusual occurrence prompted the Academy to create the Best Supporting Actor and Actress categories the following year.

'Mutiny on the Bounty' also nabbed worthy Oscar nods for its director, editing, music score, and script. Though it may be three-quarters of a century old, Lloyd's film still possesses palpable impact, stirring the senses and examining potent questions regarding duty, honor, abuse, loyalty, and punishment. Whether you view it as a rousing sea saga, historical portrait of a bygone age, or acute examination of the male psyche under pressure, 'Mutiny on the Bounty' succeeds on many levels, has influenced countless other seafaring films, and stands as a stellar example of first-class moviemaking in the early years of Hollywood's Golden Age.

'Mutiny on the Bounty' arrives handsomely packaged in one of Warner's trademark digibooks. The hardbound volume houses the disc and a lavishly illustrated 36-page tribute to the film that's frustratingly short on text, but includes a wealth of rare photos and promotional art in both full color, black-and-white, and various tinted shades in between. The classy design makes this book a pleasure to leaf through, but the lack of detailed production and biographical information is disappointing. Much more could have been written about Laughton and Gable, and though Tone is nicely acknowledged with a double-page spread, there's not one printed word about his life or career – a real shame, considering he is not a well-known personality today. For a Best Picture winner, I expected a little more history, background, and perspective than the bland overview this volume provides. Warner usually does a fabulous job integrating facts with images and artistry in its digibooks, but this edition doesn't measure up to the studio's previous efforts in that regard.

Once the BD-50 dual-layer disc is inserted, the main menu pops up immediately after the Warner Home Video logo. The static menu features the cover photo from the digibook, along with music from the film. 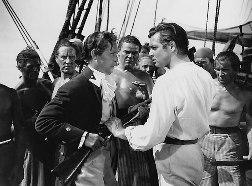 'Mutiny on the Bounty' has been digitally remastered expressly for this Blu-ray release, and the results are largely spectacular. Any anomalies in the 1080p/VC-1 transfer are due to print inconsistencies resulting from the film's advanced age, not negligence on the part of the restorers. While the majority of the transfer features excellent contrast, amazing clarity, solid gray scale variance, and no evidence of dirt or scratches – quite a feat considering the movie is 75 years old – some brief scenes and quick individual shots look soft, faded, overly grainy, and sport a few nagging defects, such as faint vertical black lines. When such scenes appear, the effect is indeed jarring, but the brevity of the instances and their sporadic occurrence considerably dull their impact. The Tahiti sequences seem to be particularly afflicted, and that may be due in part to the portable equipment used to film on the Catalina Island location and the tricky natural light. Whatever the cause, the instances only minimally compromise the viewing experience, and the strong points of this effort far outweigh any blips.

And there are many strong points. The transfer flaunts a lovely grain structure that maintains the feel of celluloid yet never overwhelms (except during the aforementioned stretches). Black levels may not be quite as deep as they could be, but they carry good weight, and whites, especially during the ship's departure sequence from Portsmouth, are bright yet crisp, and never bloom, even in harsh circumstances. The unfurling of the sails is beautifully rendered, and delicate rays of sunlight can even be seen filtering through the fabric. Close-ups are often eye-popping – you can almost count the hairs in Bligh's bushy eyebrows as well as the beads of sweat on the crew's faces – and textures, such as coarse strands of rope and the fabric of the midshipmen's uniforms are nicely reproduced. Background elements also enjoy excellent sharpness, allowing us to fully appreciate the film's fine production design.

'Mutiny on the Bounty' proves once again just how marvelous classic black-and-white films can look on Blu-ray, even those from the early 1930s. Warner is to be commended for treating these beloved films with such care, and Golden Age aficionados will be amazed by the high quality. 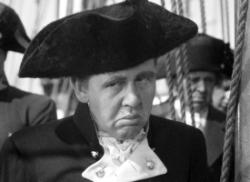 Considering MGM produced 'Mutiny on the Bounty' a mere eight years after the advent of talking pictures, it's unrealistic to expect the DTS-HD Master Audio 1.0 track on this Blu-ray disc to meet 2010 standards. Any self-respecting critic and knowledgeable viewer must cut the audio some significant slack and take into account its advanced age and the primitive equipment used to record the soundtrack, both of which severely affect its reproduction today. That said, the film's mono track isn't half-bad. Sure, a fair degree of hiss is audible and occasionally a bit intrusive throughout, and some delicate crackles and a random pop or two dot the track as well. Dialogue can be difficult to understand at times, especially when competing against elements such as wind, rain, and peripheral crowd noise, but for the most part it comes through cleanly. And the music score can sound a bit tinny when it swells to dramatic heights. All these issues are typical for a film of this vintage, and Warner technicians have undoubtedly done their best to minimize their impact.

Yet what's amazing, given the audio's antique nature, is its degree of potency and immersion. The storm sequences and pageantry episodes put us in the thick of the action, so we can feel the bustling activity of a busy ship, soak in the native Tahitian customs, and almost breathe the brisk, salty sea air. Nuances, however, are also strong, such as the Bounty's chronic creaking. Dynamic range is understandably limited, and some of the more cacophonous scenes flirt with distortion, but the mono track succeeds in wrapping us up in the action and drama of this adventure-filled story, and for a 75-year-old film, that's no small feat. 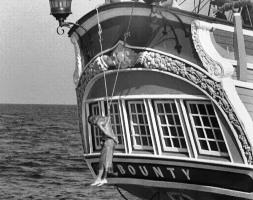 Only a couple of extras enhance the disc, but true to Warner form, they come from the MGM vaults, which makes them of special interest to classic film aficionados. 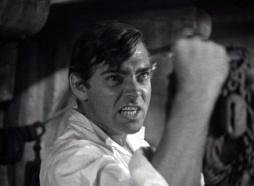 One of the all-time classic sea epics, the original 'Mutiny on the Bounty' hasn't lost its salty bite. Frank Lloyd's Oscar-winning film seamlessly combines drama, spectacle, and action to create a bold portrait of a bygone age and the intense conflicts that drive men over the edge. Charles Laughton, Clark Gable, and Franchot Tone all give top-flight performances, and the vigorous direction keeps the pace from flagging. Excellent video quality, especially for a film of this vintage, solid audio, and a couple of rare supplements, all wrapped up in a classy digibook, make this a worthy addition to any film lover's library. Highly recommended.