One of Hollywood's first - and finest - disaster flicks, San Francisco impressively depicts the famed 1906 earthquake and fire, but also boasts an engrossing narrative about a roguish Barbary Coast saloon owner (Clark Gable) and the strait-laced singer (Jeanette MacDonald) who catches his eye. Spencer Tracy supplies stellar support, and plenty of history, period atmosphere, and lavish musical sequences pepper this ambitious production. Warner Archive brings it all to brilliant life with a Blu-ray presentation featuring a high-quality remastered transfer from original nitrate elements, solid audio, and all the supplements from the 2006 DVD. Highly Recommended.

Many film fans would call the 1970s the golden age of disaster flicks, but the real golden age of movies depicting fires, hurricanes, earthquakes, and volcanic eruptions occurred during Hollywood's Golden Age in the 1930s. While it's true blockbusters like The Poseidon Adventure, The Towering Inferno, and Earthquake dazzled 1970s audiences with their colossal displays of mayhem and destruction, campy plots, and all-star casts, such spectacles merely copied the wave of disaster films that flooded theaters during the 1930s. San Francisco, which thrillingly recreates the 7.9-magnitude earthquake that shook the city on April 18, 1906, stands as arguably the best of the formidable bunch that includes The Last Days of Pompeii, The Hurricane, In Old Chicago, and The Rains Came.

The massive trembler and subsequent fire that destroyed 80% of the city don't occur until the movie's final half-hour, but they're well worth the wait. Director W.S. Van Dyke and montage expert John Hoffman pull out all the stops during the sequence, which they fashioned by mounting sets on hydraulic lifts and shakers to create the rocking movements that spur havoc and panic. Rapid cuts heighten the sense of terror and confusion that culminates when the ground literally splits apart, forming a gaping chasm that swallows up a couple of extras and snaps a water pipe in two. A few primitive process shots and the clever use of crumbling miniatures complete the stirring special effects that surely would have won an Oscar if the category had existed at the time. (It was created three years later.) The clip below offers just a taste of this classic scene:

The earthquake, of course, looms over the story, but San Francisco is hardly a garden variety disaster film. At its core, the colorful script by Anita Loos (Gentlemen Prefer Blondes) is a love letter to the City by the Bay that celebrates the spirit, spunk, and resolve of its diverse residents. The film's opening title card calls the San Francisco of 1906 "splendid and sensuous, vulgar and magnificent," and the scenes leading up to the quake reflect those adjectives. The conflict between the proprietors of shady, bawdy dance halls along the notorious Barbary Coast and city reformists who wish to clean up the disreputable area and gentrify San Francisco forms the crux of a story that also examines the push and pull between religion and sin, chronicles an unlikely love affair, and contains several musical numbers that showcase the operatic trills of star Jeanette MacDonald. 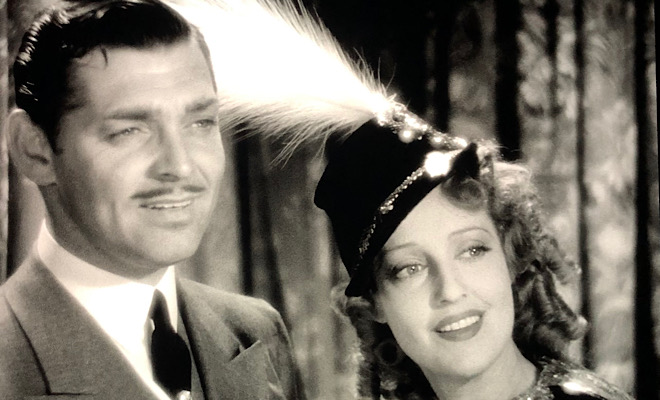 Long before Rick Blaine opened his Cafe Americaine in Casablanca, Blackie Norton (Clark Gable) was running the Paradise Club, a similar honky-tonk gin joint on the Barbary Coast. Like Rick, Blackie sticks his neck out for no one and hopes his lucrative gambling bars will continue to thrive despite growing pressure from the city to shut such dens of iniquity down. He even decides to run for city Supervisor (an office Harvey Milk would hold seven decades later) to protect his interests and those of his cronies. Father Tim Mullin (Spencer Tracy), Blackie's best friend since childhood and regular sparring partner at the local gym's boxing ring, tries to reform him, but Blackie's taste for the high life, desire to be a big shot and weakness for the weaker sex keep him on the primrose path.

On New Year's Eve, struggling singer Mary Blake (MacDonald) arrives at the Paradise Club seeking a job. The instantly smitten Blackie gives her a chance but also hopes to make her one of his conquests. Mary quickly becomes a sensation on stage but rebuffs Blackie's advances despite an attraction that grows into love. A rocky romance ensues and gets tested when Mary is offered the lead in a Tivoli Opera House production and catches the eye of wealthy magnate Jack Burley (Jack Holt), who hails from ritzy Nob Hill. Jack respects the virtuous Mary and falls in love with her, but she remains under the spell of bad boy Blackie, who refuses to recognize his faults...until the fault line underneath San Francisco ruptures and makes him see the errors of his selfish ways.

Much like Blackie, San Francisco is depicted as an immoral metropolis that needs to be tamed, a modern-day Sodom and Gomorrah or Ancient Rome. At one point, Father Tim calls San Francisco "probably the wickedest, most corrupt, most godless city in America...I wonder what the end's going to be." Well, Mother Nature - possibly with divine help - takes care of that, and in the process lends the film a righteous message that in 1936 perfectly suited the tenor of the times. 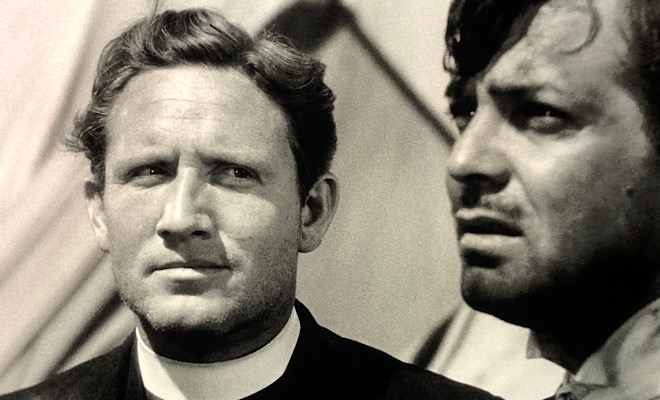 Reportedly Gable and MacDonald didn't get along during filming (her prim nature clashed with his macho sensibilities), but you'd never know it from their dynamic performances. Gable plays his rakish role with typical gusto, while MacDonald supplies necessary warmth and vulnerability. In addition to warbling the movie's iconic title tune (which Judy Garland memorably spoofed a quarter-century later in her concerts) and debuting the Arthur Freed-Nacio Herb Brown balled "Would You?" (which would gain greater renown in Singin' in the Rain), MacDonald shows off her potent pipes during lengthy excerpts from two operas, La Traviata and, quite fittingly, Faust. While it's understandable MGM would want to showcase its resident prima donna, the operatic sequences stall the story's momentum and make us all the more anxious for the earthquake to arrive.

Tracy, who would win an Oscar for playing a priest in Boys Town two years later, earned his first of nine Academy Award nods for his sincere, stoic, and wonderfully natural portrayal of Father Tim, who shares a religious affinity with Mary and clashes with Blackie over his abhorrent treatment of her. According to IMDb, at 14 minutes and 58 seconds, Tracy logs the shortest amount of screen time of any Best Actor nominee in history (perhaps he was considered too big a star to be placed in the newly created Best Supporting Actor category), but he makes the most of every moment...and makes us wish he had more of them. 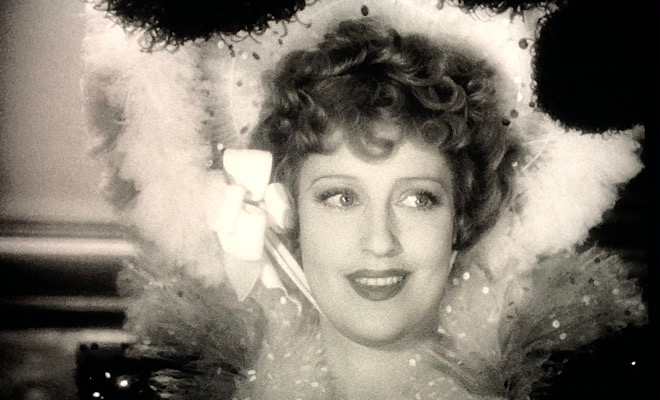 In his 1969 biography of Tracy, author Larry Swindell states Van Dyke had to convince Tracy to play second banana to both Gable and MacDonald, telling him the film needed "humanity" and "so help me, Spencer, you're the only actor I know who can bring humanity into a part." Tracy, who was a devout Roman Catholic but didn't always adhere to church doctrine in his personal life, reportedly fretted about playing a priest because he felt it might be "sacrilege." Thankfully, despite such reservations, he accepted the role, which - along with a magnetic performance in Fritz Lang's Fury and a hilarious turn in the screwball comedy Libeled Lady, both released the same year - earned Tracy the full-fledged stardom that had long eluded him.

In the end, though, the earthquake steals the spotlight from San Francisco's trio of stars, and that's just as it should be. An impressive, thrilling display of cinematic wizardry during the film industry's infancy, the disaster sequence and its fiery, explosive aftermath rivet attention and still wield a fair degree of impact 85 years later. (It also certainly helped San Francisco earn six Oscar nominations, including Best Picture and Director.) While CGI may improve the scope and spectacle of disaster movies for modern audiences, in so doing it also amplifies the artifice. Despite its rather primitive special effects, San Francisco almost always flaunts an authentic feel, never fails to deliver the goods, and puts all of its cheesy cinematic cousins of the 1970s and beyond to shame. 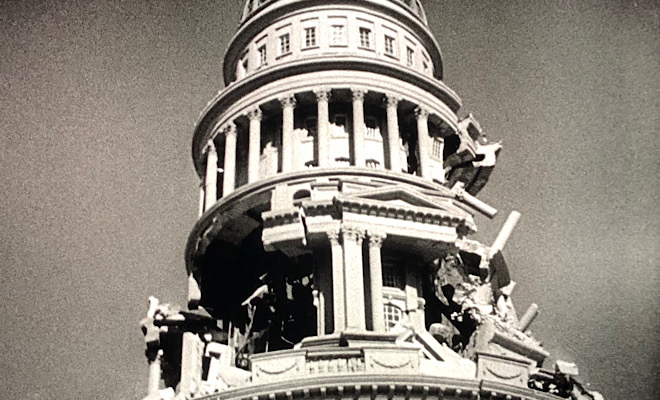 Vital Disc Stats: The Blu-ray
San Francisco arrives on Blu-ray packaged in a standard case. Video codec is 1080p/AVC MPEG-4 and audio is DTS-HD Master Audio 2.0 mono. Once the disc is inserted into the player, the static menu with music immediately pops up; no previews or promos precede it.

A new HD master culled from nitrate preservation elements yields another top-notch Warner Archive presentation of a classic MGM title. Thanks to excellent clarity and contrast, the 1080p/AVC MPEG-4 transfer revitalizes San Francisco and significantly improves upon the 2006 DVD. The healthy grain structure remains intact and produces a lovely film-like image that's almost completely free of any age-related nicks, specks, and scratches. Some variances in picture quality crop up here and there, with some scenes looking softer and grainier than others, but that's to be expected from a film of this vintage. The instances are blessedly brief and never detract from the overall viewing experience.

Rich, deep blacks anchor the picture, the crisp whites never bloom, and nicely varied grays enhance depth and detail levels. The feathers and sequins that adorn MacDonald's flashy, Adrian-designed costumes are well rendered, as is the dusty, post-earthquake rubble. Sharp close-ups highlight Gable's rugged features, as well as MacDonald's creamy complexion and Tracy's pious aura. The heightened definition most certainly calls attention to some of the movie's rudimentary - but still impressive - special effects, most notably a couple of process shots, but that's a small price to pay for an otherwise top-notch transfer that's definitely worthy of an upgrade.

The DTS-HD Master Audio 2.0 mono track supplies clear, well-modulated sound. There's a lot of aural action in San Francisco, from the rumble and destruction of the earthquake to a few lengthy operatic scenes, but a wide dynamic scale handles all the sonic challenges, including MacDonald's high Cs, without a hint of distortion. Excellent fidelity, especially for a 1930s film, enhances the musical numbers and scoring, while strong bass accents bring the earthquake and subsequent fire and explosions to brilliant life. Some of the boisterous revelry from the opening New Year's Eve sequence obscures some dialogue, but otherwise all the banter, song lyrics, and sincere speeches are easy to comprehend. No pops or crackles mar the track, and only a faint bit of occasional hiss is noticeable. San Francisco won the Oscar for Best Sound, Recording, and this strong track shows us why.

All the bountiful extras from the 2006 DVD have been ported over to this Blu-ray release.

San Francisco may be rightfully remembered for its climactic - and impressive - earthquake sequence, but before the soundstage starts to shake, rattle, and roll, this robust drama also paints a captivating portrait of a turbulent city in transition while chronicling the complicated romance between a roguish saloon owner and the prim-and-proper singer he discovers. Clark Gable, Jeanette MacDonald, and Spencer Tracy file colorful performances, but the earthquake and subsequent fire are the real stars of one of Hollywood's first - and best - disaster films. A new HD master struck from original nitrate elements, solid audio, and all the supplements from the 2006 DVD make this Blu-ray edition worthy of an upgrade. Highly Recommended.