From the mid-1930s through the end of the decade, screwball comedies reigned supreme at the box office, yet bafflingly, Hollywood's most prestigious studio could never quite master the genre. Maybe MGM considered itself too dignified to stoop to such inane, irreverent humor, despite the enticement of lucrative financial returns. After all, Leo the Lion put his stars up on pedestals; he didn't drag them through the mud or make them the butt of lowbrow jokes. Sophisticated, drawing room comedy was MGM's bag, and the studio flaunted its airs by adapting Broadway hits like Private Lives, Dinner at Eight, and The Women. Occasionally, Metro would take a stab at screwball, but the results were at best hit-and-miss.

Libeled Lady was one of the hits, and ranks in the top tier of original MGM comedies. Zany enough to qualify as a screwball exercise, yet possessing the proper degree of Metro gloss and refinement, this breezy farce features four megawatt stars - Jean Harlow, William Powell, Myrna Loy, and Spencer Tracy - in a romantic mix-up filled with clever sparring, witty repartee, and some inspired physical comedy. None of it is particularly memorable, but the legendary quartet makes the film worth watching and keeps its engine humming despite a few narrative hiccups. 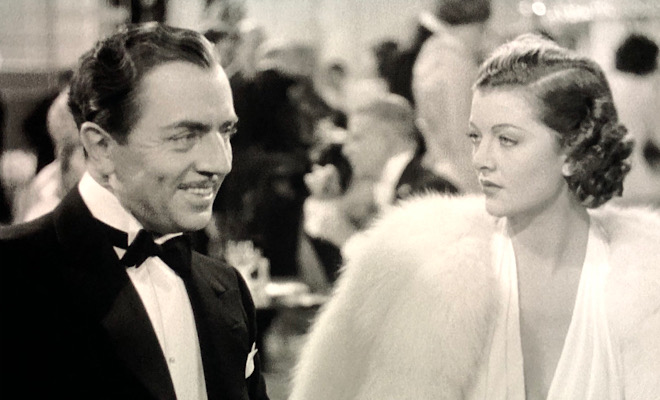 The shenanigans begin when Warren Haggerty (Tracy), the hard-boiled managing editor of the New York Evening Star, learns his paper has falsely accused pampered rich girl Connie Allenbury (Loy) of husband-stealing. Connie quickly files a $5 million libel suit, which threatens to bankrupt the Star and stop its presses forever…unless, of course, Warren can somehow prove "America's International Playgirl" is a sexual predator after all. Enter Bill Chandler (Powell), a libel specialist and former Star employee, who left the paper on poor terms. Warren desperately needs Bill's expertise, and woos him back at great expense to sabotage Connie's reputation.

As luck would have it, this dire legal crisis occurs on Warren's wedding day, forcing the altar-shy newspaperman to postpone his nuptials for the umpteenth time, much to the outrage of his impatient fiancée, Gladys Benton (Harlow), who's sick of playing second fiddle to Warren's job. So imagine "Gladdie's" ire when Warren quickly insists she marries Bill - whom she's only just met - so Bill can then pursue Connie on a transatlantic cruise, trap her in a compromising position, and prove the Star's accusations weren't the least bit libelous at all. Warren and Bill manipulate Gladys into participating in their off-the-wall scheme, but Warren doesn't anticipate Gladys getting a crush on her new husband, and Bill hasn't an inkling he might fall in love with the surprisingly charming Connie.

Complications and mishaps abound, yet despite several very funny exchanges and amusing situations, Libeled Lady doesn't quite snap, crackle, and pop like the best screwball films. The script (by Maurine Watkins [who wrote the play upon which the musical Chicago is based], Howard Emmett Rogers, and George Oppenheimer) consistently sparkles, but Jack Conway's workmanlike direction lacks the finesse, flair, and energy of such master comedy craftsmen as Howard Hawks and Preston Sturges. As a result, the pacing of Libeled Lady occasionally flags, and it's up to the stars to pick up the slack. Luckily, their supreme talent saves the day. 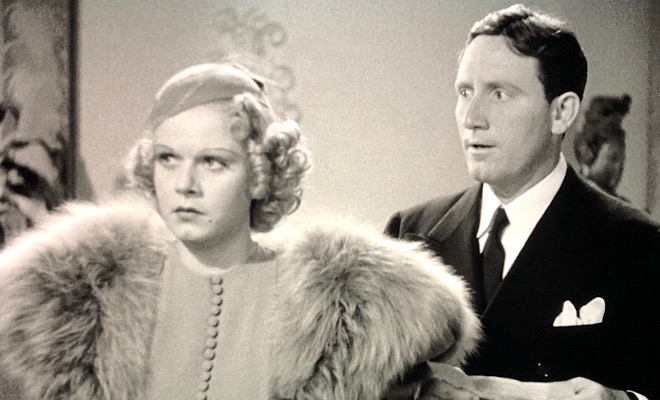 All the actors shine (including the lovably irascible Walter Connolly as Connie's outraged father), but without question Harlow stands out. Though MGM often cast the blonde bombshell as a sexy siren, comedy was definitely her domain, and Libeled Lady showcases her effervescent personality, spot-on timing, and outrageous sense of fun. Had she not died of kidney failure the following year at age 26, Harlow undoubtedly would have become one of Hollywood's most deft light comediennes, and it's a shame she wasn't able to realize that potential. Harlow may not be the best actor in the film, but she's by far the most magnetic, and it's a kick to watch her dress down Tracy and masquerade as the devoted wife of Powell, her real-life love at the time.

Of course, cinematically speaking, Powell was eternally betrothed to Loy (the pair made a whopping 14 films together), and once again they create comfortable yet palpable chemistry. Though a tad too reserved for a madcap heiress (Carole Lombard or Claudette Colbert she most certainly is not), Loy still creates an engaging character whose frosty veneer shields a warm heart, while the normally debonair Powell displays a welcome slapstick streak during a riotous trout-fishing expedition. And not to be forgotten, Tracy embodies the fast-talking, fast-acting editor who's dedication to his profession and fear of commitment belies his deep love for Harlow. Tracy may be forever linked to Katharine Hepburn, but he and Harlow generate plenty of sparks, and their earthy rapport makes one rue the fact they only made two pictures together.

Can Libeled Lady compete with the likes of such screwball classics as Bringing Up Baby, The Awful Truth, My Man Godfrey, and The Palm Beach Story? Not quite. But this wacky farce, which received a Best Picture Oscar nomination (the only Academy Award nomination it received), often delivers the goods, and remains a noteworthy and appealing entry in the genre. 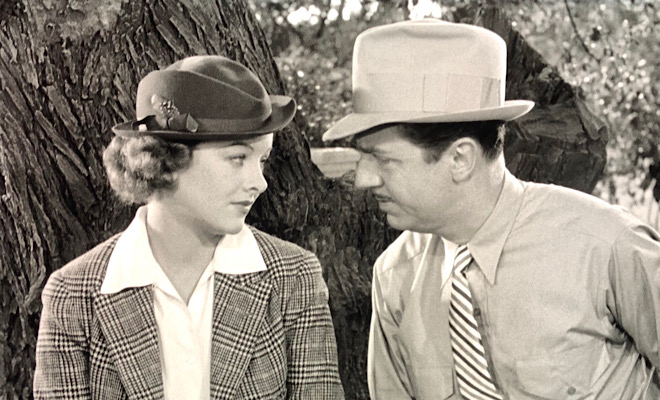 Libeled Lady arrives on Blu-ray packaged in a standard case. Video codec is1080p/AVC MPEG-4 and audio is DTS-HD Master Audio 2.0 mono. Once the disc is inserted into the player, the static menu without music immediately pops up; no previews or promos precede it.

A new 4K restoration of Libeled Lady yields a very solid 1080p/AVC MPEG-4 transfer that's a big step up from the 2005 DVD. All the nicks, marks, and blotches that plagued that release have been erased, and the refurbished image looks clear, vibrant, and wonderfully film-like. Grain is evident, but it never overwhelms the picture, and sharp close-ups flatter all the principals. Blacks are rich, whites run a tad hot but still exhibit good definition, and nicely varied grays enhance detail and depth levels.

On the downside, there's a missing frame early in the film and an overly grainy few moments between Harlow and Loy late in the film (the snippet was probably lifted from another source print because pristine elements no longer exist), but those are minor quibbles. Considering Libeled Lady is almost 85 years old, it looks amazingly spry, and classics fans will surely welcome this upgraded presentation.

The DTS-HD Master Audio 2.0 mono track supplies clear, well-modulated sound. The all-important dialogue is properly prioritized and easy to comprehend, and the unobtrusive but omnipresent background music nicely underscores the action. Pops and crackles are absent, but a faint layer of surface hiss crops up intermittently throughout the film. It never distracts from the comedy on screen, but does remind us of the movie's advanced age. Sonic accents are distinct, as are the atmospherics of the bustling newspaper newsroom and rushing river during the hilarious fishing scene. Libeled Lady may not possess the most active soundtrack, but this lossless rendering does it proud.

All the extras from the 2005 DVD have been ported over to this Blu-ray edition, and Warner Archive adds a few vintage goodies to beef up the supplemental offerings.

Like a bowl of Rice Krispies, Jean Harlow, William Powell, Myrna Loy, and Spencer Tracy make Libeled Lady snap, crackle, and pop. The magnetism of this megawatt quartet fuels this funny, frenetic, free-wheeling farce that features plenty of laugh-out-loud moments and holds up mighty well more than eight decades after it perked up Depression-era audiences. A brand new 4K restoration significantly improves upon the 2005 DVD, while solid audio, and several extras add to the appeal of Warner Archive's impressive Blu-ray presentation. Recommended.