The people of Los Angeles set aside their melodrama when their lives are turned upside down by an Earthquake! With an all-star cast including Charlton Heston, George Kennedy, Ava Gardner, Geneviéve Bujold, Richard Roundtree, Marjoe Gortner, and Lorne Greene - among many others - the film struggles under the weight of just too many storylines. While clunky, both versions are a hell of a fun ride. Shout Select offers up a solid 2-disc set featuring the theatrical cut and the longer 2-parter television cut of the film. Both feature solid transfers with decent audio mixes and share a fine collection of bonus features. Recommended

Former pro-football player-turned-famous city engineer Stewart Graff (Charlton Heston) is stuck in a loveless marriage with Remy (Ava Gardner), the daughter of his boss Sam (Lorne Greene). He's tempted to stray when his old flame Denise (Geneviéve Bujold) comes back to town, Graff sees a chance at a happier life. Meanwhile, LAPD officer Lou Slade (George Kennedy) must deal with being suspended while helping his pals Miles (Richard Roundtree) and Sal (Gabriel Dell) with their motorcycle stunt as Sal's sister Rosa (Victoria Principal) dodges the unwelcome advances of the unhinged Grocer/National Guardsman Jody (Marjoe Gortner). This slice of everyday life for these characters comes to a crashing, crushing, carnage-fueled stop as the largest earthquake on record strikes Los Angeles. 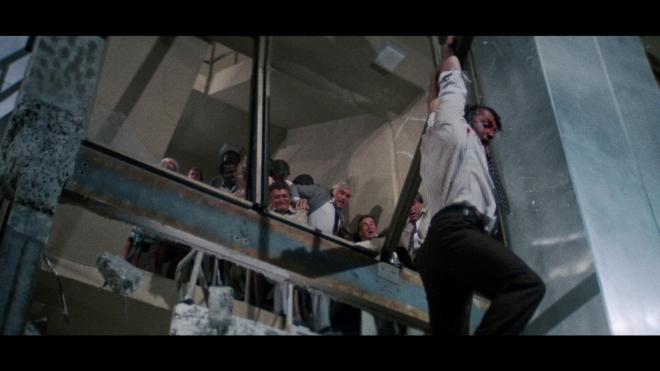 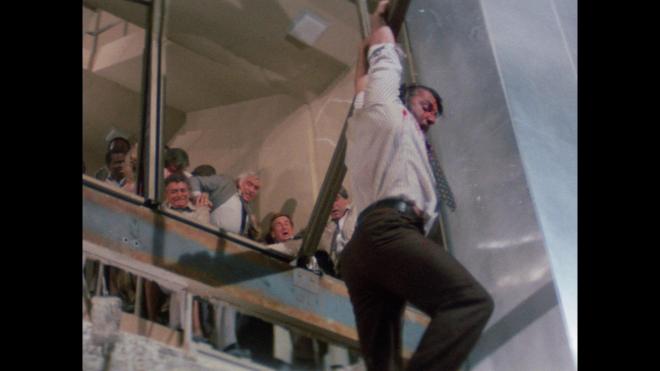 With Earthquake, Airport '75, and The Towering Inferno, 1974 was the year of the disaster movie. While Inferno was the biggest movie of the year, Earthquake held its own even as it struggled with a constipated script that takes entirely too long to get moving as it works to establish far too many characters in a slimly interconnected narrative. With a screenplay by Mario Puzo that was apparently drastically simplified by George Fox, director Mark Robson does what he can to give his all-star cast plenty of time to shine even if their personal story bits would have been more comfortably suited for a day-time soap opera. While the melodrama is more than a little thick - the film is a hell of a lot of fun - for both versions!

As if it wasn't possible for Earthquake to be any longer or more melodramatic, the TV film version finds a way! Earthquake was such a big hit that when NBC picked up the TV broadcast rights that they requested deleted scenes be restored and new material shot so the film could be padded out to a near four-hour two-night movie event. Oh boy, is the TV Cut padded! We get two honeymooners who never leave an airplane pontificating about gender roles while disaster strikes Los Angeles. Marjoe Gortner gets a few extra scenes to go full creepy with Victoria Principal. On top of that, some extra dialogue exchanges what were a little too coarse for television have been revised or edited out altogether in favor of some extra b-roll cutaways that just slow...the...movie...down.

If you want the best possible experience, the Theatrical Cut is much more satisfying. There's a reason a lot of that footage was cut. However, if you want a fun B-movie experience for close friends with some good junk food and a couple of stiff drinks, the Television Cut is a riot in its own right. Both versions of the film suffer from just way too much plot and entirely too many characters. According to legend, Mario Puzo's original draft was so dense with so many side plots and characters that the film languished in development hell until George Fox was brought in to wrestle this beast into submission. While the plot and characters are a bit dicey, the rampant death and destruction of a major metropolitan city is the stuff of a true disaster movie. The visual effects are first-rate with some truly great carnage featuring numerous famous landmarks of the era. One also has to give kudos to the production for knowing when to ratchet up the suspense as a dam threatens to burst while Kennedy and Heston hurry to save dozens of people trapped underground.

Earthquake is undoubtedly a silly film - but it's a great disaster flick. It hits all of the standard checkmarks of the genre. While Kennedy and Heston were better served by Airport '75, they hold this show together. The weight they bring their roles and their commitment to their respective storylines make the show watchable when the other excruciating side plots wash over and bog down the show. If you're a disaster movie fanatic, your collection isn't complete without Earthquake. It's the perfect Double Feature partner with San Andreas.

Earthquake shakes, rattles, and rolls its way onto Blu-ray courtesy of Shout Select in a two-disc set. Pressed onto two Region A BD-50 discs, the set includes both the theatrical and television cuts of the film on their own individual discs. The discs are housed in a standard sturdy Blu-ray case with identical slipcover artwork with the spine number 78. Each disc loads to a static image main menu with traditional navigation options. 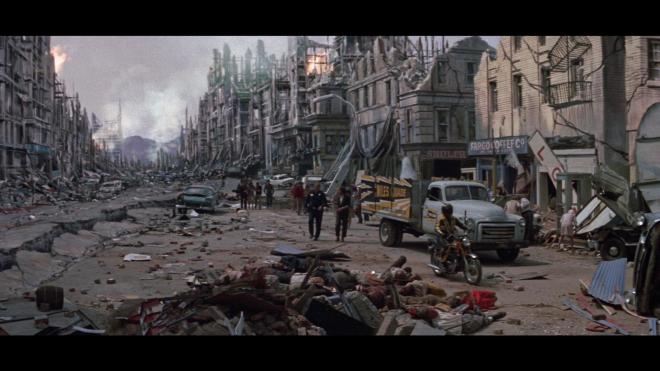 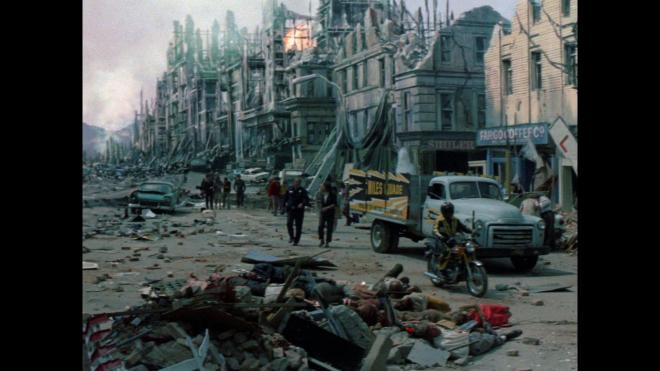 According to the disc artwork the 2.35:1 1080 transfer of the Theatrical Cut of the film and the 1.33:1 1080p transfer of the TV Cut were sourced from fresh new 2K scans of the original film elements. Now, this doesn't indicate restoration or if the elements from the negative or archive prints - either way, the results are pretty gosh darn impressive for both transfers in their own way. The Theatrical Cut looks the best as the elements appear to be in much better shape. There is a little bit of speckling here and there but it's not quite as heavy as in the TV Cut. Film grain is apparent and stable giving the film some nice robust details. Some of the optical effects and matte-paintings for the destruction of LA are a bit soft, but they've always looked that way. The live-action destruction is where this film really shines. Black levels are robust with some nice deep inky blacks and stable shadows. Colors are on point with healthy flesh tones and strong primaries.

The Television Cut is in pretty decent shape but it displays a lot more speckling and the grain field isn't as nicely resolved as the Theatrical Cut with some sequences looking particularly buggy. On the flip side, some of the scenes shot specifically for this version of the film - the couple in the airplane in particular - can appear a bit soft and hazy. The main feature looks good but watching the two versions side by side you can see how the cutting and zooming in of the film's original aspect ratio for television cut out some key characters in dialogue exchanges while also making the grain that much more prominent. Colors are also cooler with stronger blues and lighter primaries. As far as television presentations go it's not so bad but it comes packed with its own set of defects. 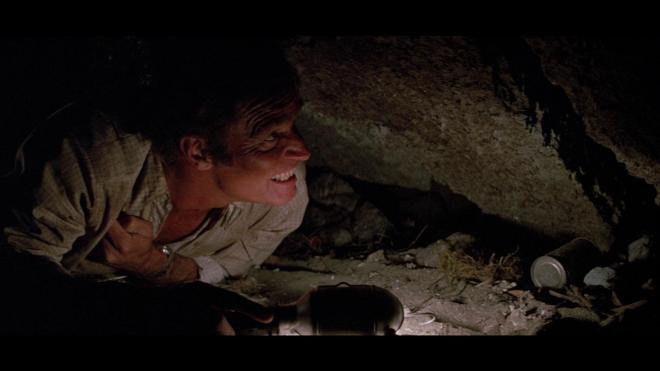 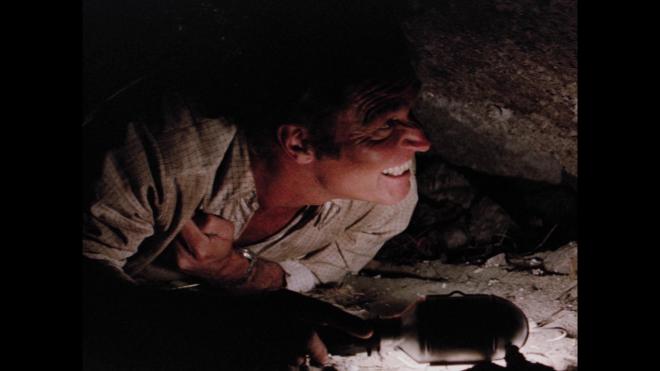 Experience Earthquake in SENSURROUND! - or rather DTS-HD MA 5.1 or DTS-HD MA 2.0 for the theatrical cut or DTS-HD MA 1.0 for the Television cut. The nice thing for the Theatrical Cut is you get two great audio mixes to chose from. Both the 5.1 track and the 2.0 tracks offer plenty of traction to the onscreen carnage when the big quake hits. To that point, while the 5.1 mix nicely spaces out the elements to give a fuller immersive experience, the 2.0 track keeps things more front-loaded and punches up the bass and LFE experience. Depending on your setup you may get different mileage out of these tracks but you're in good hands with either of them. Dialogue is clean and clear. Sound effects have plenty of impact while John William's score comes through nicely to punch up the excitement or thicken the melodrama.

The 1.0 mono mix for the television cut of the film gets the job done but it lacks a lot of the life and impact of the 2.0 and the 5.1 mixes. There's just no getting around this, unfortunately. Turning up the volume helps a bit, but only just so much. I know there's no practical way to do this, but when the film was shown on television NBC made special arrangements with local FM radio stations to air the audio track of the film so people could "simulate" the Sensurround experience at home with their personal radios in addition to their television speakers. I would have loved to have given that a try somehow - seems like a pretty cool experiment. 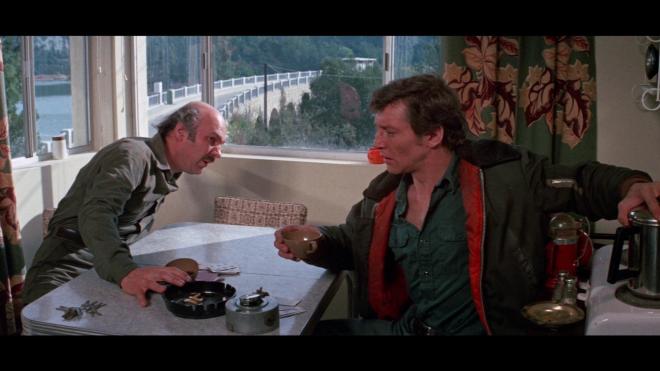 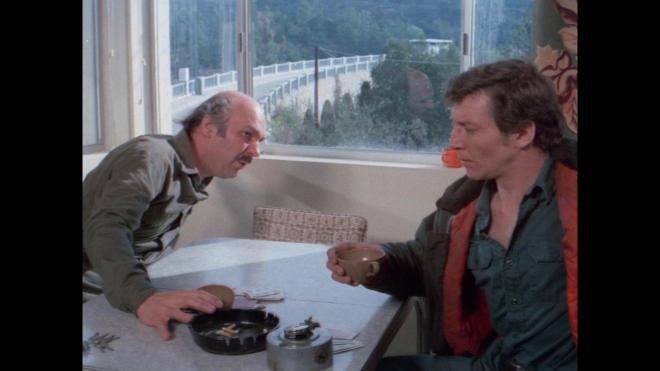 While not totally loaded with exciting bonus features, what's here is pretty decent. Disc One gets some nice archival material, namely the audio interviews with Heston, Greene, and Roundtree which are informative but you're only hearing their side of the conversation so you have to fill in what the question was. Disc Two gets some more interesting material with some new interview pieces with film historians and filmmakers about various aspects of the production. Also interesting to see were a couple of scenes from the TV cut that didn't make it into this restoration because the film elements were too damaged - don't worry you're not missing anything important but it's nice to see them in SD just the same. 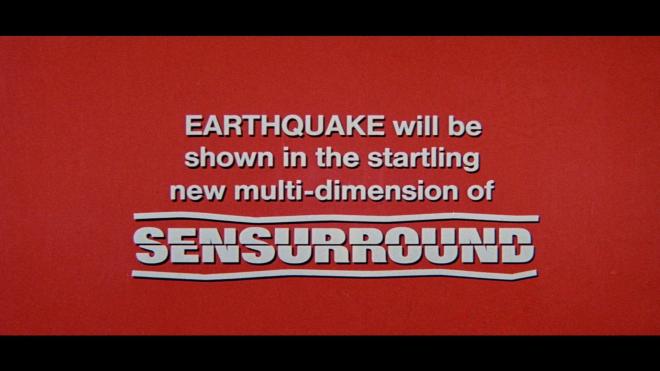 Earthquake is a silly but enormously entertaining disaster flick with two unique ways to experience it. While the Theatrical Cut is certainly the best version of the film the Television Cut offers up an extra silly and entertaining viewing experience that makes the film feel all the more like a big-budget soap opera. Featuring some big-time A-Listers as well as a cadre of familiar faces, Earthquake is a fun feature not meant to be taken too seriously. Kick your feet back and just have fun. Shout Select delivers both versions of the film onto Blu-ray in fine order with solid video transfers and audio mixes to match. Bonus features may not be plentiful but they offer up some nice insight into the making of the film. If you love disaster movies, Earthquake is an important piece of the collection. Recommended.

Sale Price 18.99
Buy Now
3rd Party 13.93
In Stock.
See what people are saying about this story or others
See Comments in Forum
Previous Next
Pre-Orders
Tomorrow's latest releases