A Polynesian sailor -- unjustly imprisoned after defending himself against a colonial bully -- is relentlessly persecuted by his island's martinet French governor.

When people mention disaster movies, most us recall the campy craze that spawned such memorable 1970s blockbusters as 'The Poseidon Adventure,' 'The Towering Inferno,' 'Airport 1975,' and 'Earthquake' (in Sensurround, no less!). Yet true cinema aficionados know Hollywood's best depictions of natural catastrophes occurred during the 1930s. Yes, the 1930s...and in black-and-white, which somehow lent these destructive acts of God a stark immediacy and heightened sense of realism. 'The Last Days of Pompeii,' which climaxed with the devastating eruption of Mount Vesuvius, started the cycle of disaster flicks in 1935, but one of the genre's most impressive spectacles arrived in theaters two years later and took the country "by storm."

Samuel Goldwyn's production of 'The Hurricane,' adapted from the novel by Charles Nordhoff and James Norman Hall (best known for 'Mutiny on the Bounty'), wowed audiences with its inventive special effects and powerful sound as it chronicles the mass destruction of a tiny, idyllic South Sea island populated by happy, sarong-clad natives and smug French colonists (with either British or American accents), a few of whom try to impose their rigid, often sadistic will on their innocent subjects in the name of law, order, and progress. The worst offender is Governor DeLaage (Raymond Massey), a dour, stubborn dictator who exacts stiff sentences for petty crimes and never commutes them. When the strapping Terangi (Jon Hall), first mate on the island's cargo ship and recently married to the lovely Marama (Dorothy Lamour), punches a bullying white racist in a Tahiti saloon, he's thrown in jail for six months. DeLaage refuses to intervene, despite pleas from the ship's captain (Jerome Cowan), island doctor (Thomas Mitchell) and priest (C. Aubrey Smith), and DeLaage's own wife (Mary Astor), all of whom believe Terangi was provoked. Unable to abide incarceration and the vicious abuse the prison's chief guard (John Carradine) heaps upon him, Terangi tries to escape numerous times, but is always recaptured, adding years to his sentence. But the Polynesian's spirit will not be broken, and his intense desire to return to his wife and community on the isle of Manekoora fuels his resolve to find a way out of his personal hell.

Most of the script by Dudley Nichols ('Stagecoach') focuses on the conflict between justice and the law, and how society's rigid regulations are often unwarranted and inhumane. Terangi's struggles are exhaustively documented, padding the running time (occasionally to the movie's detriment) while brisk ocean breezes ominously forecast the impending meteorological maelstrom.   The drama, which includes a few tense action scenes, maintains interest, but the storm is what we really want to see, and at last director John Ford unleashes the blustery beast during the film's final half hour. And it's worth the wait. Though Ford often complained about not being allowed to shoot 'The Hurricane' on location, he and special effects artist James Basevi (who designed and executed the 1906 San Francisco earthquake in 'San Francisco' and devastating locust plague in 'The Good Earth') rolled up their sleeves and brilliantly designed a massive natural cataclysm on a studio backlot that's both an engineering marvel and sight to behold. It reportedly took four months - and $400,000 - to film the riveting 15-minute sequence, which required airplane engines to generate the fierce winds, fire hoses to produce the torrential downpours, and more than 2,000 gallons of water emanating from a series of strategically placed chutes to create a giant tidal wave.

Many of the actors do their own stunts to increase the level of realism, and the work looks sufficiently dangerous. Actress Mary Astor recalls in her autobiography, "The hurricane...kept us occupied for weeks. We walked against winds, carefully calculated to blow at near hurricane level. Huge propellers kept us fighting for every step, with sand and water whipping our faces, sometimes leaving little pinpricks of blood on our cheeks from the stinging sand." At one point, a torrent of water almost seems to wash Astor away as she gamely clings to a rope that may lead her to safety.

Hall, who would soon become one of the screen's leading swashbucklers, often resembles a young Johnny Weissmuller, and his athletic prowess serves the film well, thankfully masking his minimal acting talent. Lamour, still three years away from her first 'Road' picture with Bing Crosby and Bob Hope, looks more than comfortable in her sarong (a costume she would wear in many movies), and her gooey love scenes with Hall define island exoticism. Massey occasionally overdoes it as the stern, unyielding DeLaage, but he's always fun to watch, as is the stately Smith as the noble, benevolent priest. Mitchell, however, steals the show as the disheveled, down-to-earth doctor, and the Academy of Motion Picture Arts and Sciences justly rewarded his colorful performance with a Best Supporting Actor Oscar nomination.

Ford's macho style pervades 'The Hurricane,' but moments of tenderness abound as well, making this disaster epic one of the genre's most well rounded and substantive entries. Our affinity for the island natives makes us sympathize with their desperate plight all the more, and the lack of any cartoon stereotypes helps the film attain a degree of gravity its more outlandish cousins lack. Though a few minutes could be trimmed to make 'The Hurricane' leaner and meaner, it remains an atmospheric, often thrilling adventure tale that shows just how fleeting paradise can be, especially in the face of Mother Nature's tempestuous wrath. 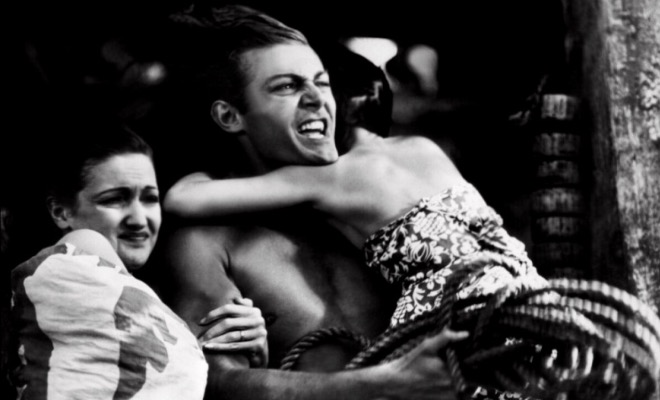 'The Hurricane' arrives on Blu-ray packaged in a standard case. Video codec is 1080p/AVC MPEG-4 and audio is DTS-HD Master Audio 1.0. Once the disc is inserted into the player, the static menu with music immediately pops up; no previews or promos precede it.

Thanks to a 4K restoration, the 1080p/AVC MPEG-4 transfer of 'The Hurricane' looks very good indeed. The source material still flaunts its fair share of speckles, marks, and a few blotches, but strong clarity and gorgeous day-for-night photography immerse us in the South Seas setting and lend the climactic storm plenty of palpable impact. A hodgepodge of location shooting, interior sets, and rear projection and miniature work, 'The Hurricane' somehow manages to maintain a cohesive look that enhances the tale's believability quotient. Some scenes appear overly bright and a bit washed out, but such white-hot contrast appears to be a conscious choice by director John Ford. Black levels, however, remain rich during nocturnal scenes, and there's enough gray scale variance to provide a good sense of depth and detail. Noticeable grain adds texture and weight to the image while maintaining a lovely film-like feel, and close-ups nicely highlight such fine facial features as C. Aubrey Smith's wild eyebrows, Thomas Mitchell's sweaty, unshaven cheeks, and the smooth complexions of Jon Hall and Dorothy Lamour. No digital anomalies afflict the picture, and any artificial enhancements have been judiciously applied. For an almost 80-year-old film, 'The Hurricane' holds up quite well, and classics aficionados should be pleased with this stellar effort from Kino Lorber.

'The Hurricane' won an Oscar for Best Sound Recording and was nominated for Best Musical Score, and the DTS-HD Master Audio mono track honors those distinctions well. The howling wind, crashing waves, churning surf, and massive destruction aurally pummel us during the climactic storm sequence, and the lilting strains of Alfred Newman's South Seas music complement the tropical setting and fill the room with ease. At times, the omnipresent scoring comes close to overpowering the dialogue, but conversations still remain clear and comprehendible throughout. Audible surface noise (especially during quieter scenes and transitions) and a few errant pops and crackles intrude, but never distract, and no distortion, even during the height of the typhoon's fury, creeps into the mix. Subtleties also come across well in this surprisingly nuanced track that serves all of the film's varied tones and set pieces well.

Filled with drama, action, atmosphere, and eye-filling spectacle, the 1937 version of 'The Hurricane' stands as an admirable cinematic achievement. Its thrilling storm sequence is a special effects marvel that still impresses today, and though its tale of injustice, longing, brutality, and the indomitable human spirit pales in comparison, it nevertheless holds our interest, thanks to the superior directorial talents of John Ford. The ensemble cast brings the exotic story to life, as does Kino's high-quality Blu-ray presentation, which features remastered video, solid audio, and an informative commentary track. Fans of disaster epics will surely want to add this Golden Age classic to their collection, but the film earns a recommendation for its craftsmanship, performances, and technical wizardry.

Sale Price 45.69
Buy Now
3rd Party 45.69
In Stock.
See what people are saying about this story or others
See Comments in Forum
Previous Next
Pre-Orders
Tomorrow's latest releases