Prepare yourself for this terrifying, twisted and chilling film that critics are calling "the most entertaining horror movie in years" (Joe Williams, St. Louis Post-Dispatch).

From the co-writer and director of Guardians Of The Galaxy and Guardians Of The Galaxy Vol. 2, comes the deliciously demented story of an unnamed evil wreaking havoc on a small town. Intent on devouring all life on Earth, this dark and slimy entity is infecting anyone in its path. Now it's up to the local sheriff, Bill Pardy (Nathan Fillion, Firefly, Serenity), and his team to stop the spread of rampant devastation – and shocking mutilation – before it's too late. This outrageously funny horror film also stars Michael Rooker (Guardians Of The Galaxy, The Walking Dead), Elizabeth Banks (The Hunger Games, Pitch Perfect) and Gregg Henry (Body Double, Jason Bourne).

I lamented in my review of The Thing that paranoia as a theme has sadly disappeared from today's cinema screens. I could have also said the same thing about genre films that pay homage to the 1950s, a time when scares and comedy intermingled effortlessly and kids seemed to love movies involving mad scientists, mutated monsters and creatures from outer space. Alas, those days would seem to be over, for it seems any movie released in the past twenty years that is in any way nostalgic for the era has died a quick death at the box office. The list of casualties is long and bitter: in addition to The Thing (1982), such throwbacks and remakes as Cat People (1982), Invaders from Mars (1985), The Blob (1988), Matinee (1992) and Body Snatchers (1994) were all greeted with critical and commercial indifference, now residing in the great dustbin of home video called cult fandom.

Now we can add Slither to that list, James Gunn's (Dawn of the Dead, Guardians of the Galaxy Vol. 2) affectionate, charming and good-humored ode to the slimy, B-movie monster thrills of yesteryear. When it slithered to cinemas, Slither was a critical darling, but a total box office bust. Which is a shame, really, because it's a fun, riotous, and wonderfully gruesome film, and one filled with deft stylistic touches and witty black humor. 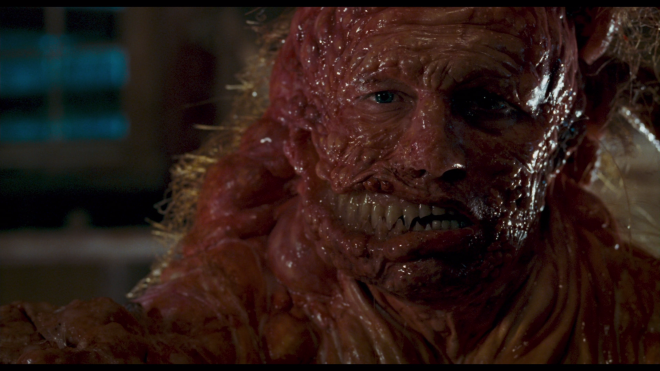 Our story begins after a meteorite crashes in a small Midwestern town (seriously). Local handyman Grant (Michael Rooker) stumbles upon the fizzy fossil, and becomes infected by the cosmic lifeforce living inside it. After returning home to his lovely (and considerably younger) wife Starla (Elizabeth Banks), she soon discovers all is not right with her new husband. His growing hunger for raw meat and strange body mutations are only the beginning — an alien creature has fully invaded Grant, the first host on the way to total infestation of humankind. Enlisting the help of her ex-flame, Deputy Bill Pardy (Nathan Fillion) and the slimy Jack MacReady (Gregg Henry), they team up to do battle with the interstellar creature, who is fast turning townsfolk into zombies, as well as hatching a plan to create a new race by mating with Starla.

Slither is, of course, totally silly. But it is knowing, smart and well-written, and quite endearing in how slavishly it skews genre clichés and conventions. Gunn knows how to spin lines in just the right way, so that he seems smarter than the material, yet without being condescending. He has also cast his movie very well, attracting a talented ensemble of familiar faces, but no big stars. Nathan Fillion (of Serenity fame) is fast becoming his generation's Bruce Campbell — a fine actor with great comedic timing who is able to elevate even the most tired genre material with charm and grace. I also liked the underrated Banks, who manages to not only make all the gooey creature stuff believable, but also the fact that someone as young and beautiful as Starla could be in love with Rooker. For his part, Rooker tears into his role as the buggy Grant with such wild abandon that he practically chews the scenery right off the screen. A long way from the darkness of his most famous role, that of the titular serial killer in Henry, Rooker is both comical and intense, perfectly mirroring Gunn's tight-wire act of laughs and scares.

I'm sure there are some who will dismiss Slither sight unseen, just because it looks, well, cheesy. But this is the kind of pure popcorn movie that is the perfect Saturday night entertainment and really deserves a chance to find an audience on video. So, if you like horror movies at all, especially '50s sci-fi/comedy hybrids, give Slither at least a rent. It certainly is one of the most purely enjoyable 96 minutes I've yet spent.

Shout! Factory brings Slither to Blu-ray as a Collector's Edition package under the distributor's Scream Factory line. The Region A locked, BD50 disc is housed inside the normal blue case with brand new reversible cover art and a cardboard slipcover. At startup, the disc goes to a generic menu selection along the bottom with music playing in the background and a static photo. Occasionally, one of those creepy, crawly slugs slithers its way across the screen. Unfortunately, according to the Shout! Factory website, the exclusive, limited edition poster of the newly commissioned artwork has already sold out.

When James Gunn's cult horror comedy first slithered its way to high-def home theaters, it was on HD DVD right as the format wars were under way, and the results were pretty fantastic for those early stages of either format. Without any official news stating this new 1080p/AVC MPEG-4 encode was made from a more recent remaster of the elements, we are left to assume the folks at Scream Factory simply repurposed the same VC-1 encode from eleven years ago.

Thankfully, it's not as bad as it initially sounds. In fact, the presentation holds up remarkably well for its age and compared to other Blu-ray titles of similar caliber and time period. Originally shot on traditional 35mm film, there are several soft moments throughout, but on the whole, the source appears to be in excellent shape, showing plenty of sharp, fine lines in the town's quaint, all-American neighborhoods. Background information is distinct and resolute, and facial complexions are highly revealing with lifelike textures during close-ups.

With great contrast and brightness from start to finish, the 1.85:1 image is very bright and upbeat with crisp, brilliant whites everywhere while true, rich blacks provide the presentation with a lovely cinematic quality and shadows that never engulf the finer details. Granted, compared to more recent Blu-ray releases made with fresher encodes, the picture can look somewhat digitized and dated, showing a bit of crush in poorly-lit environments and mild posterization in bright interior shots. Nevertheless, the video also comes with vibrant, richly-saturated primaries, giving the blood-red slugs a gooey, slimy pop, while the rest of the palette is awash with an accurately-rendered and energetic array of secondary hues.

In the end, a new remaster of the original elements would've been nice, but this high-def presentation is quite lovely and fans will find little to complain about.

Like the video, the audio receives a minor upgrade that isn't leaps and bounds better than its predecessor. Sadly, I no longer own the HD DVD, which featured a Dolby Digital Plus track, for the sake of comparison. But in either case, I remember it being a fun, quirky listen with some amusing activity in the surrounds.

This new DTS-HD Master Audio 5.1 soundtrack appears to be about the same, but that’s only because the sound design has never been particularly aggressive. Sure, the surrounds are used on a few occasions with reasonable effectiveness. Most memorable moments are those involving the infected townspeople swarming around our heroes and of course, the action-packed last quarter of the movie inside the Grant house. Floorboards squeak and crack all around with excellent panning and directionality, and the voices of the zombified people fill the rest of the space, creating a decently satisfying soundfield. In the front soundstage, imaging feels broad and expansive with a good amount of background activity spreading across all three channels and a clean, detailed midrange. Dialogue is crisp and precise, delivering every joke and line with superb intonation and clarity. A healthy, robust low-end provides the action and music with terrific weight and presence, though there are couple times when explosions and gunfire seem a bit lacking.

Audio Commentaries: Writer / director James Gunn reunites with stars Nathan Fillion and Michael Rooker for an enthusiastic, highly-entertaining conversation. All three men passionately reminisce on the production, working with each other and the challenges they faced while sharing various on-set anecdotes. The second commentary is the same one from the 2006 HD DVD where Gunn and Fillion touch on many of the same aspects as the previous track, but it's not quite as entertaining though still informative.

The Genesis Of Slither (HD, 30 min): A brand-new interview with Gunn talking extensively about his career, developing the story, his inspiration and his creative process at comedy.

The Other MacReady (HD, 8 min): Recent interview with actor Gregg Henry reminiscing for a few minutes about the production, the cast and working with Gunn.

James Gunn's Slither is a bit too smart and sharp to truly be called a guilty pleasure. But even if it ain't exactly highbrow, it is a totally enjoyable sci-fi creature movie that deserves a better fate than the bargain bins of brick-and-mortar stores. Despite recycling the same high-def transfer made by Universal Studios for their 2006 HD DVD release, Scream Factory has put together a very nice Blu-ray package, featuring a great-looking audio and video presentation. The same set of supplements are joined by three new special features that fans will enjoy, giving them enough reason to add this package to their cult library.

Sale Price 26.45
List Price 27.99
Buy Now
3rd Party 22.64
In Stock.
See what people are saying about this story or others
See Comments in Forum
Previous Next
Pre-Orders
Tomorrow's latest releases