Just a word of warning right up front, I consider George Romero’s original ‘Dawn of the Dead’ to be the most influential and seminal horror masterpiece in all of cinematic history. It offers a horrifying look at humanity reduced to its base nature and presents a seemingly-timeless commentary on the devolution of society. At the same time, it functions as an edgy work of art whose pop-scream nuances have made it an instant hit with audiences over the decades. For me, it was responsible for more late-night, cinematic binges as a teenager than any other flick I ever snuck into my basement to watch.

The remake plays out much like the original -- a zombie plague sweeps the nation and leaves society devastated in its wake. A group of survivors hole up in a local mall and try to survive until the government can clean up the mess. As unspeakable horrors transpire outside of the mall, the survivors are their own worst enemies and inevitably lose their safehouse to the undead. Chaos ensues throughout. However, unlike the survivors of the original (whose undoing comes at the hands of their own complacency and arrogance), the survivors in the new ‘Dawn of the Dead’ are a group of battle-weary, panic-stricken loners that band together just to make it through the night. Ana (Sarah Polley) has just lost her husband to a cannibalistic little girl. As she flees her home in a wonderfully executed opening, she drives through her neighborhood, now in violent shambles. She meets Kenneth (Ving Rhames), a police officer who’s headed toward the mall with a business man named Michael (Jake Weber), a gun-toting thug (Mekhi Phifer), and the criminal’s pregnant wife (Inna Korobkina).

To its credit, the new ‘Dawn of the Dead’ has some great things to offer its modern horror audience. A collection of memorable character beats, a welcome level of palpable tension, and plenty of creative scares should mildly entertain any horror-junkie throughout the film. More importantly, while it never achieves the deftly-layered commentary of its predecessor, it does regularly hint at more significant issues that place it a cut above most other remakes and recent horror drivel.

Likewise, a strong ensemble cast and a series of solid performances (especially from Rhames, Polley, and Phifer) raise the overall caliber of the film. At the same time, the characters that really matter -- the zombies -- are wonderfully conceived and add a legitimately frightening presence to the film. It doesn’t hurt that the soundtrack boasts a great mix of tone-setting songs. Johnny Cash’s “When the Man Comes Around” opens the film and a hilarious lounge cover of Disturbed’s “Down with the Sickness” plays as the camera pans across a horde of zombies.

Unfortunately, after an unsettling opening sequence, director Zach Snyder doesn’t exhibit the same sure-handedness with ‘Dawn of the Dead’ that he did with the visually stunning ‘300.’ While his eye for image composition is impeccable, his reliance on a cliché ridden script by James Gunn keeps this zombie entry from fulfilling its visual potential. I adored Gunn’s script for ‘Slither’ (a cleverly written creature-feature) but raised more than an eyebrow when I connected him to this one. However, after some checking, I found that the script for ‘Dawn of the Dead’ went through numerous character and dialogue rewrites by Michael Tolkin -- the inadequacies of which made more sense when I noticed the other cliché-ridden screenplays he wrote for films like ‘Deep Impact,’ ‘Changing Lanes,’ and ‘The New Age.’

Regardless of who’s to blame, the end result is a script that’s packed with teeth-gritting dialogue and a series of bizarre decisions by the characters that keep ‘Dawn of the Dead’ from escaping its average script. Snyder seems to prioritize the action and gore without building it on a solid foundation of people we actually care about that do things we would find ourselves doing if we were in the same predicament. Snyder can’t even decide on the rules of his undead universe. Slow, lumbering zombies? Speedy, hyperactive zombies? Pick your poison because this remake of ‘Dawn of the Dead’ features both. All of the zombies in Snyder’s corpsian opus are technically capable of moving at lightning speed, but only when it pushes a particular scene along. At other times, the zombies are just slow enough to allow our heroes safe passage. When one character abandons the mall to rescue a dog (one of the most dull-witted scenes in any recent horror flick), an entire crowd of vicious zombies is struck blind and dumb long enough to build implausible tension for the audience.

George Romero has openly praised other zombie films outside of those in his own canon (he adored ‘Shaun of the Dead’), so I trust his opinions of a remake of his own masterpiece. Coincidentally, his opinion of the new ‘Dawn of the Dead’ sums up my exact feelings -- he says, “It was better than I expected… but it sort of lost its reason for being. It was more of a video game. I’m not terrified of things running at me… it’s like Space Invaders. There was nothing going on underneath.” Well said, sir. In the end, Snyder’s ‘Dawn of the Dead’ is a fun ride that delivers some quick scares, but lacks the intelligence and taut tension of the original. It’s certainly not a waste of time, and horror fans will probably have a good time watching it, but do yourself a favor and check out the original -- the story and character development are superb and leave this remake feeling like little more than entertaining eye-candy.

(Note that this “Unrated Cut” of the film tacks on 9 minutes of additional material. There isn’t anything of spectacular note, but Snyder uses the extra bits to fill in a few gaps from the theatrical cut, briefly expand some character relationships, and, of course, to up the gore wherever possible.) 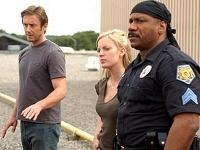 Like its previously released HD DVD counterpart, the Blu-ray edition of ‘Dawn of the Dead’ features a faithful 1080p/VC-1 transfer that will excite fans of the film. A distinct palette is awash with blues and grays, yet primaries pop and reds are particularly healthy. A horror transfer like this one can rise or fall based on shadow delineation alone and, thankfully, visibility in the shadows is deep and natural. There are several shots where the film has a decidedly three-dimensional appearance and the transfer works hand-in-hand with the zombie chaos to enhance the scares without revealing the seams in the effects and makeup work. Skintones are intentionally pale, but exhibit sharp textures and render hair, pores, and clothing fibers with ease. In fact, fine detailing is very impressive -- the mall itself is a jackpot of small background elements that look great in high definition. There are a few shots that drift out of focus, but it always seemed to me that Snyder was using loose shooting methods to capture the disorienting panic of the on-screen survivors.

The only time detail falters is amidst the film’s heavy grain field and brief smatterings of noise, both of which are inherent to the original print. The downside to the high resolution presentation in this case is that it sharpens the grain as much as it does the image. When small details are covered by this salt-and-pepper filter, it reduces the clarity of certain elements when they’re not properly lit. The aforementioned digital noise appears in a few spots -- mainly in the opening early-morning scenes and second act shots of a dark mall basement -- but never becomes a distraction. Overall, this is an excellent transfer that should easily satisfy fans of the film. It’s an obvious upgrade from the standard DVD (which suffered from compression issues, crush problems, and soft edges) and is, to my eyes, identical to the HD DVD transfer. 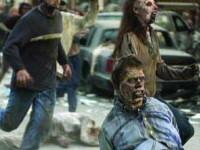 Hitting the same highs as the HD DVD’s TrueHD 5.1 mix, the Blu-ray edition’s DTS HD Master Audio 5.1 surround track showcases the film’s onslaught of screams, gunshots, and revving engines. The result is spectacular. Snyder’s zombies have a wet, throaty throttle to their moans that seem to emanate from every channel, while crowds of zombies sound notably fierce and menacing. Treble tones are stable and LFE support is aggressive -- the dynamics of this mix will put your surround system through its paces.

Dialogue is crisp and well prioritized (despite the explosions of violence that occur at regular intervals) and the track’s ambiance is convincing. More importantly, the soundfield takes full advantage of the rear channels to deliver an immersive soundscape. There was more than one occasion where I was fooled into thinking a sound was occurring in my home theater. To top it all off, pans are swift and channel movement is subtle. Combine that with the track’s precision and ‘Dawn of the Dead’ reveals itself to be a top notch audio track that won’t leave you with any complaints. 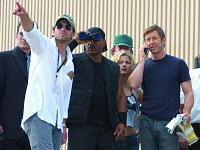 In some form or another, the Blu-ray edition of Snyder’s ’Dawn of the Dead’ includes most of the production featurettes from the “Unrated Edition” standard DVD as well as the 2007 HD DVD. While there are some disappointing absences, Universal has crammed most of the remaining material into a cumbersome U-Control PiP track. Don’t get me wrong, I love the idea of U-Control, I just don’t like that I can’t access individual featurettes and content as I please.

The only standalone feature that exists outside of the U-Control track is a fun-but-frivolous audio commentary with director Zach Snyder (in full fanboy mode) and producer Eric Newman. I was glad to find that Snyder wasn’t a braggart about the film and acknowledged his problems as a first time director -- he occasionally makes scathing comparisons about his film’s shortcomings that really made me warm up to his complementary opinions. However, Snyder comes off more as a fan than as a professional director. This is one of those commentaries where the director reacts to the film with the excitement he probably had when shooting it -- it’s refreshing and keeps the proceedings interesting. While it doesn’t offer much in the way of interesting comparisons between his film and other zombie offerings, it does allow him to explain his motivations, the reasons he made specific decisions, and changed certain elements of the Romero universe in his remake.

Zach Snyder’s remake of ‘Dawn of the Dead’ is suitably entertaining and has enough stylized action and over-the-top gore to catch the attention of a new generation of fans. Alas, Romero loyalists will encounter a variety of issues that leave them wading in the wake of this flashier reboot. Regardless, this Blu-ray boasts an excellent video transfer, a powerful and aggressive DTS HD Master Audio track, and a decent pair of supplements. While the disc doesn’t offer an upgrade to those who already have the HD DVD, standard DVD owners will enjoy revisiting the film in high definition.

Sale Price 9.99
Buy Now
3rd Party 4.65
In Stock.
See what people are saying about this story or others
See Comments in Forum
Previous Next
Pre-Orders
Tomorrow's latest releases