A strange lifeform consumes everything in its path as it grows and grows.

Stereotypical heartland small town U.S.A. is in danger of being engulfed, consumed, and swallowed up whole by an alien threat that quietly and stealthily grows unseen until it's too late in 'The Blob (1988).' The quirkily entertaining and sadly under-appreciated creature-feature is not only a remake of the 1958 sci-fi horror flick starring a very young and boyish Steve McQueen, but a surprisingly and curiously intelligent modernization of a clever tale expressing social fears and apprehension of the unseen monsters developing within our midst. Considering the movie was made in the eighties, at the height of Cold War paranoia, an easy and immediate answer to the suggested anxieties would point the finger to the Soviet Union and the panic of communism, which I wouldn't argue against. However, the script from Frank Darabont and Chuck Russell shrewdly and comically touches on other, more devious cultural anxieties.

Like the blood-red, amorphous extra-terrestrial mass that increases in size and expands, spreading into all corners of the fictional but cozy down-to-earth Arborville and consumes all that is good and decent of the town, the most immediate fear is that of the immoral and lawless. This is very obviously and shamelessly represented by Kevin Dillon's bad-boy delinquent Brian Flagg, a hilariously stereotypical biker with a Devil-may-care attitude who in the end, of course, comes through when required to be the convenient hero. Not only is he a leather-jacket-wearing daredevil who smokes and drinks, but he's also an orphaned, economically-deprived and marginalized independent type who doesn't play by the rules, as represented by his awesome 80s Samson-like hairdo. When trouble starts in this otherwise quiet, peaceful community, such as when a homeless man is devoured by the gelatinous goo, he's the first to be the guilty suspect. 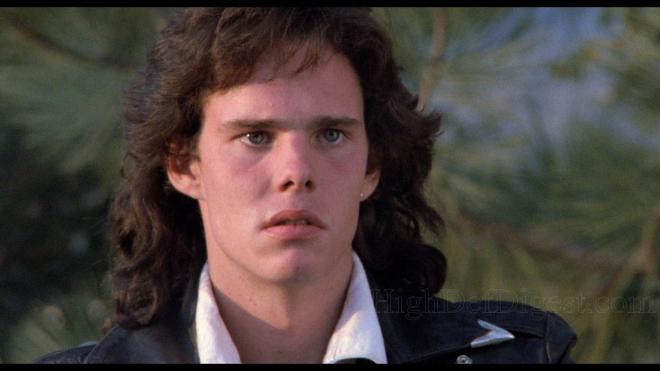 Naturally, as anyone who's ever watched a movie would expect, our reluctant hero is called into action — or better yet, saved from his dark criminal path — by his unforeseen — or perhaps, very predictable — love for the "All-American" good girl and prom-queen cheerleader Meg Penny (Shawnee Smith of the 'Saw' franchise and recently of 'Anger Management'). Fascinatingly, she's far from the hesitant hero, jumping into the thick of things and running towards danger not only to save her little brother Kevin (Michael Kenworthy) and his friend Eddie (Douglas Emerson) from the insatiable hunger of the alien blob, but also from the graphic violence and conventionality of the "slasher" film — another widespread cultural concern of the decade. Humorously, director Chuck Russell doesn't shy away from commenting on the annoyance of certain movie patrons and earlier has a pair of irresponsibly lustful teens be some of the first victims to the voracious hunger of the ever-growing slimy glob.

Interestingly, going back to Cold War paranoia, this Darabont and Russell version of the independently-produced monster classic tackles the subject matter of arms-race hysteria and communism suspicions in a blatantly head-on manner. If Dillon's bad-boy criminality, subversive art and unchecked teenage hormones are a threat to cultural norms, they don't compare to the alarmingly dangerous actions made by those in power influenced and convinced by those fears — namely, government conspiracies and the manufacturing of weapons run amok. Unlike the original film, a military operation, presumably there to protect the people from the alien menace, and led by Dr. Meddows (a terrific Joe Seneca) turns out to be greatest threat to the idyll American heartland. Along with the shockingly good and graphic special effects, this makes for a thought-provoking watch of a largely-forgotten, under-appreciated horror remake.

Chuck Russell and Frank Darabont's 'The Blob (1988)' comes to Blu-ray as a Limited Edition release courtesy of Twilight Time. The Region Free, BD50 disc is housed in the standard blue keepcase accompanied by an eight-page booklet with an essay written by screenwriter Julie Kirgo. At startup, the disc goes straight to a static menu with the usual options.

The 1988 remake overruns Blu-ray with a great-looking 1080p/AVC MPEG-4 encode (1.85:1) that shocks as often as it lets down, which is not to say that it disappoints. It's just not very consistent, looking very highly-detailed and sharp one minute while soft and blurry the next. Lettering on buildings, signs and the labels on random objects are distinct and intelligible, and healthy facial complexions can be revealing in close-ups. The source appears to be in excellent condition with plenty of visible details, even in the darkest portions of the frame, showing a thin layer of natural grain for an appreciable cinematic feel. Contrast and brightness levels are very well-balanced, offering crisp, clean whites and rich, deep blacks throughout. Colors are full-bodied and cleanly rendered with bright, nicely saturated primaries and lots of warm secondary hues.

Slightly more impressive than the video is a terrifically entertaining DTS-HD Master Audio soundtrack that's tremendously engaging and satisfying. Assuming this to be a remaster of the original stereo elements, engineers have done a splendid job repurposing several background noises to the rears, nicely enhancing the soundfield to keep the listener immersed. Despite these subtle discrete effects, the lossless mix remains very much a front-heavy presentation, creating an awesomely broad and expansive soundstage. Imaging displays smooth, fluid panning between three channels with convincing effectiveness and crystal clarity. Thanks to an extensive mid-range, Michael Hoenig's original score enjoys outstanding precision and warmth with clean separation in the orchestration and a weighty low-end that provides lots of depth. Amid all the great action and music, vocals remain distinct and intelligible from beginning to end.

Stereotypical small town U.S.A. is in danger of being engulfed, consumed and swallowed up whole by an alien threat that quietly and stealthily grows unseen until it's too late in 'The Blob (1988).' The Frank Darabont and Chuck Russell remake of the 1958 sci-fi horror classic is a quirkily entertaining and sadly underappreciated creature-feature in need of a larger audience. The Blu-ray from Twilight Time arrives with great picture quality and a slightly better audio presentation. Although terribly light in the bonus department, the overall package is for genre enthusiasts and makes for a nice addition to the cult collection.

Sale Price 79
Buy Now
3rd Party 59.95
In Stock.
See what people are saying about this story or others
See Comments in Forum
Previous Next
Pre-Orders
Tomorrow's latest releases