Nastassia Kinski (Tess, Paris, Texas) stars as Irena, a beautiful young woman on the bridge of sexuality; she discovers love for the first time only to find that the explosive experience brings with it tragic consequences. The tremendous passion of this girl's first romantic love is so strong, however, it bypasses the chaos around her- including her brother's (Malcolm McDowell, A Clockwork Orange, Caligula) extraordinary demands- as it pushes her on to her own bizarre destiny. With a style as timeless as myth, Cat People is an erotic fantasy of the passion and terror that surround this girl's first love. Desire... passion... blood, her lust transforms her into one of the Cat People.

'Cat People' is one of those completely ludicrous but strangely compelling cinematic car crashes that could only have been made in the '80s. Not so much a remake as a "re-imagining" of the 1942 Val Lewton classic of the same name, writer-director Paul Schrader takes a dated piece of drive-in pulp and elevates it to the plane of faux-high art. He panders to '80s decadent sensibilities with heaping helpings of gratuitous gore and lots of leering shots of Natassia Kinski's boobies, but infuses it all with enough thematic complexity that 'Cat People' retains a fascinating, hypnotic power that ultimately elevates it above Schrader's self-defeating pretensions.

On paper, the plot is hilarious. Kinski stars as Irena, a beautiful young woman "on the verge of her sexuality" (i.e, she's a virgin and really horny). After her parents are killed under mysterious circumstances, she is called out to New Orleans by her long-lost brother Paul (Malcolm McDowell). Immediately after Irena steps through the front door, Paul tries to get her into the sack with a rather strange idea of seduction -- long speeches about "repressed animal instincts" and an ancient curse that causes their bloodline to turn into leopards after mating. According to the legend, Paul tells Irena, they must mate with their own kind, or be fated to kill their lover in order to revert back to human form. Makes a venereal disease seem tame, doesn't it?

Amidst Paul’s clear-cut pleas to "keep it in the family," Irena falls in lust with a local zoo curator Oliver (John Heard). Torn between two potential lovers, Irena must make a choice -- does she give in to her incestuous family bloodline, or does she risk making love to Oliver and transforming into one of the Cat People?

As a monster movie, 'Cat People' doesn't really work. Yes, the best classic monster stories (Dracula, Frankenstein, et al) are meant to work as allegories, but at least their villains were more or less believable in the framework created. Not so with 'Cat People,' because even with a healthy suspension of disbelief, the transition between human/cat doesn't even make even illogical sense (nor is it rendered with particularly believable make-up effects). By making the graphic elements of the story so overt, Schrader undercuts his own mythology. Silly ideas like this are best left to the imagination, but Schrader doesn't have the suggestive touch that Lewton displayed in the original. Instead, as he proved with his seminal scripts for the classics 'Taxi Driver' and 'Raging Bull,' Schrader is a hardcore realist -- not exactly a sensibility that gels with fantasy-horror.

Taken in the context of the film’s own behind-the-scenes story, ‘Cat People’ is arguably a much more interesting film. As we learn in the HD DVD's supplements, Schrader's own marriage was dissolving during the film’s production, and in an unintended case of life imitating art, he developed an immediate obsession with Kinski. It's particularly fascinating that that the director’s admitted point of entry to the story is Heard's Oliver, if only because he's such a putz. Fearful of women, he is attracted to Irena precisely because he is afraid of her; meanwhile, Irena is jealous of Oliver's girlfriend, Alice (Annette O'Toole), who Irena knows can please Oliver sexually in a way she never will be able to.

In hindsight, this lends the film an inherently misogynistic subtext. Schrader repeats the visual conceit of voyeuristically placing of the oft-naked, nipple-baring Kinski on a cinematic pedestal (framing her as an object to be leered at), and in the film’s disturbing conclusion, makes Irena an animal locked in a cage by her "owner" Oliver. It's the ultimate in female objectification by way of the dominant male gaze. As icky as they may be, the real-life parallels in all of this are intriguing, and to Schrader's credit, admissions like these are rarely made publicly (let alone documented in a disc’s supplemental package). Such soul-baring doesn't transform 'Cat People' into an undiscovered classic, but it does make it a far more interesting a film to analyze.

Critical musings aside, 'Cat People' is certainly a stylish and well-produced film. The New Orleans locations drip with atmosphere, and Schrader was smart to employ Giorgio Moroder, whose typically '80s synthesizer-heavy score remains one of the best soundtracks of any horror film of the era. Add to that some impressive production design, elegant cinematography, and the sensual Kinski, and 'Cat People' holds up as an imperfect but intriguing little cult gem.

Shout! Factory brings 'Cat People' to Blu-ray as a repackaged Collector's Edition under the distributor's Scream Factory line. The Region A locked, BD50 disc is housed inside a blue, eco-elite case with brand new reversible cover art and cardboard slipcover. At startup, viewers are taken to an animated menu screen with music. Also, if you buy direct from the Shout! Factory website, fans can get an exclusive, limited edition poster of the newly commissioned artwork with their purchase!

'Cat People' purrs its way unto Blu-ray with a 1080p/AVC MPEG-4 encode that appears identical to its HD DVD counterpart, which is neither a bad thing nor a good thing. For the most part, the 1.85:1 framed picture is strong with excellent detailing in many scenes, particularly outdoor daylight sequences. But there are also a fair amount of poorly-resolved and blurry moments, bringing the overall quality down. I also detected the mild use of artificial sharpening in several spots, creating some noticeable ringing around the edges of buildings and the finer lines. Blacks are generally accurate, but they also tend to look a tad faded at night with average shadow delineation. The best scenes show spot-on contrast and excellent color rendering, but the weaker parts are quite flat and dull. It's not a bad transfer, but it's also not a significant improvement.

Like the video, the same high-def audio heard on the HD DVD appears to have been repurposed for this Blu-ray edition of the 80s cult fantasy horror. Only, Shout! Factory gives fans the choice between a 2.0 stereo track and a 5.1 soundtrack. Surprisingly, the latter seems to be the winner with a better sense of presence and imaging. It's a front-heavy mix, which is not only great but preferred since its truer to the original design. Music spreads evenly and with excellent balance across all three channels while several off-screen effects are amusingly convincing. Low bass is appropriate and deep, providing the song selections and score with some depth, and vocals are very well-prioritized in the center. Sadly, there's much else going on in terms of dynamics and acoustics, making the overall lossless mix feel rather flat and somewhat boring.

The stereo track, I'm guessing, comes from the same 5.1 mix because it frankly sounds terrible, as if the design has been downgraded, squeezed and stretched. It's much louder than normal as well, making the music come off a bit harsh and bright. The mid-range feels tightly constrained, and bass is an exaggerated, hollow mess. Dialogue is also heard at the same decibel level as the rest of the mix and spread across the entire soundstage, so it tends to be drowned out by the score in many areas.

In the end, the DTS-HD Master Audio 5.1 soundtrack seems to be the stronger and preferred option.

Scream Factory adds to the supplemental collection with a few more bonuses which are exclusive to this Blu-ray edition. 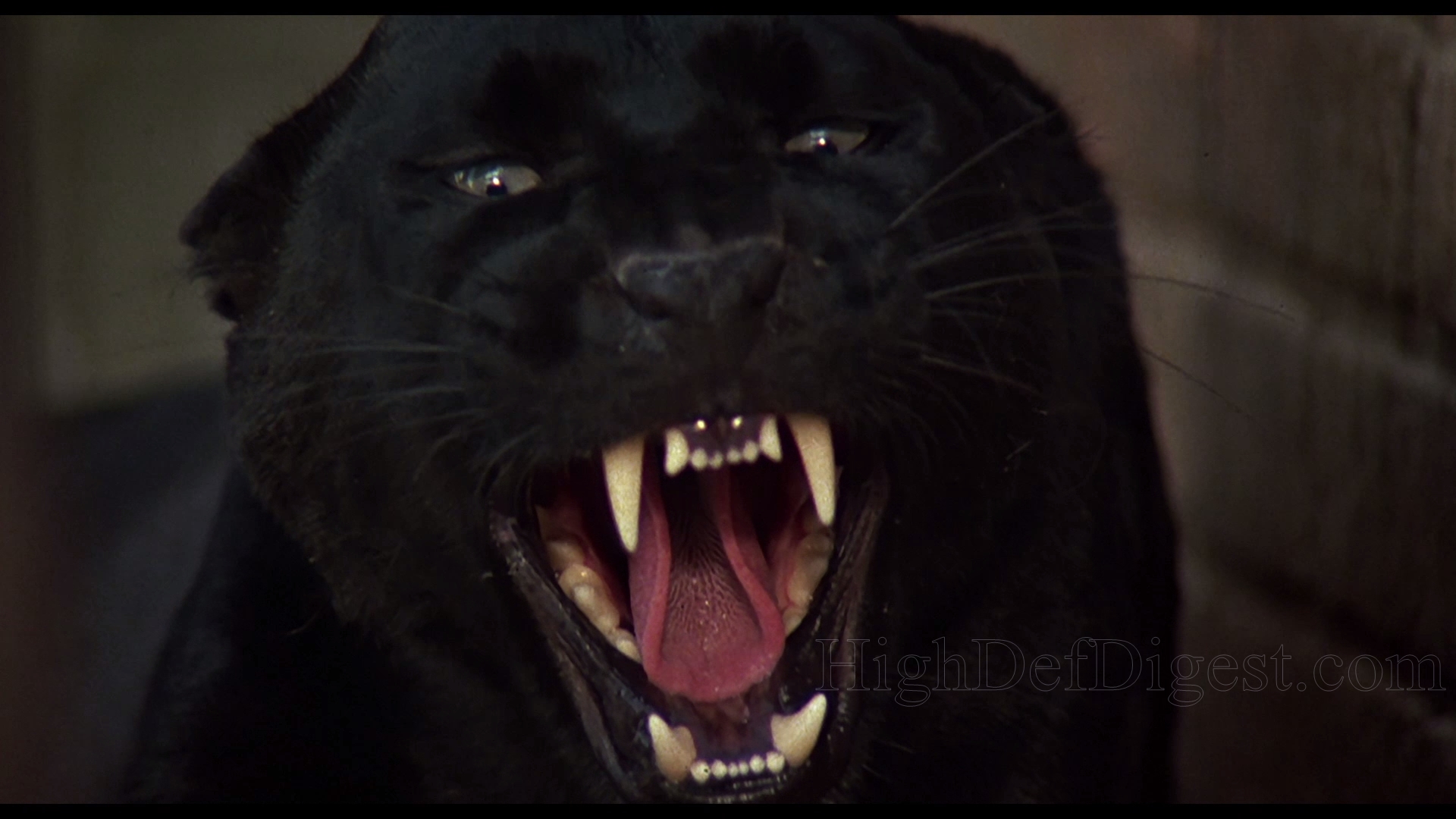 None too subtle but genuinely moody and atmospheric, 'Cat People' is a stylish cult fantasy thriller making an attempt at exploring our base animal instincts, which apparently have a great deal to do with sexual urges. But ultimately, Paul Schrader's reimaging of Val Lewton's 1942 classic is somewhat over the top and silly, yet the camera is head over heels in love with star Nastassja Kinski, arguably making it the film's lasting impression and reason for its continued popularity. The Blu-ray features the same audio and video presentation seen in the HD DVD release, but a new set of interviews makes the overall package worth collecting for the most devoted fans.

Sale Price 18.99
List Price 19.99
Buy Now
3rd Party 9.99
In Stock.
See what people are saying about this story or others
See Comments in Forum
Previous Next
Pre-Orders
Tomorrow's latest releases