A hurricane swells outside, but it's nothing compared to the storm within the hotel at Key Largo. There, sadistic mobster Johnny Rocco (Edward G. Robinson) holes up - and holds at gunpoint hotel owner Nora Temple (Lauren Bacall), her invalid father-in-law (Lionel Barrymore) and ex-GI Frank McCloud (Humphrey Bogart).

McCloud's the one man capable of standing up against the belligerent Rocco. But the postwar world's realities may have taken all the fight out of him. John Huston co-wrote and compellingly directs this film of Maxwell Anderson's 1939 play with a searing Academy Award-winning performance by Claire Trevor as Rocco's gold-hearted, boozy moll. In Huston's hands, it becomes a powerful, sweltering classic.

Of the four films Humphrey Bogart and Lauren Bacall made together, ‘Key Largo’ stands apart. John Huston’s high-voltage adaptation of a little-known Maxwell Anderson play may look like a typical Warner Bros gangster flick or standard film noir in the vein of the pair's previous pictures, but it's really a movie about serious moral and political issues and the complex nature of the human soul. Adopting an introspective tone, but still packed with heated confrontations, crackling tension, and gunplay galore, 'Key Largo' is a searing ensemble drama that takes the Bogart-Bacall partnership to a higher plane.

Yes, the potent chemistry between the two still exists, but it's less overt, growing out of the material instead of fueling it. No sexy banter or clever quips lace their dialogue, and they don't kiss or even hug during the course of the film. (At one point Bogart caresses Bacall’s hair, but that’s the full extent of their intimate physical contact.) Like several message-oriented dramas of the late 1940s, 'Key Largo' puts its ideas before its stars, painting memorable portraits of evil, nobility, and social injustice. And though 'Key Largo' would sadly mark the final time Bogart and Bacall would share the screen, its reliance on substance over style lends their cinematic marriage a newfound maturity and serenity that's fascinating to behold.

Set in the hot, humid Florida Keys during the sleepy off-season, ‘Key Largo’ opens with the arrival of drifter Frank McCloud (Bogart) at a not-so-grand hotel run by the wheelchair-bound James Temple (Lionel Barrymore) and his widowed daughter-in-law Nora (Bacall) just before a severe hurricane comes ashore. Frank, who's had trouble finding meaning in his life since he returned from combat in World War II, was Nora's heroic dead husband's commanding officer, and hopes his visit will provide comfort and closure for the grieving family.

When he steps off the bus, however, Frank walks into a literal den of thieves. Legendary gangster Johnny Rocco (Edward G. Robinson), who was exiled to Cuba by the U.S. government but has secretly returned to complete a nefarious business deal, has rented out the entire hotel, so he and his henchmen, along with former girlfriend Gaye Dawn (Claire Trevor), a boozy floozy who used to be a nightclub singer, can hide out while they await the arrival of Rocco's Miami business associates. A tense stand-off develops between the ruthless gang and their righteous captives, while the fierce storm frays everyone's raw nerves and puts a hitch in Rocco's plans. So, too, does the meddling of the local police, who seek to recapture a couple of escaped Native American convicts on the loose in the area. As the hurricane rages - just like Rocco - pressures mount and test the mettle of everyone involved.

The diminutive Rocco, who once was "an emperor whose rule extended over beer, slot machines, the numbers racket, and a dozen other forbidden enterprises," still looms large, reigning over the hotel like a mini Hitler, and his bigoted views eerily recall those of the German dictator. Huston and co-writer Richard Brooks, who rightly classify post-war America as a safe haven for all, use Rocco to subtly remind us our country is far from immune to racial and ethnic prejudice. Hitler may be gone, they imply, but tyrants still exist, here and abroad, and they must be vanquished. And by transforming and updating Anderson's 1939 blank verse play - modernizing the dialogue, adding the hurricane, and changing the ending - they not only popularize the story, but also make it more relatable and impactful.

Bogart and Bacall may be the film's drawing cards, but Robinson is the true star, and he hijacks the picture the same way Rocco hijacks the hotel. He may not appear until the 26-minute mark, but the first time we see him - soaking in a bathtub while reading a newspaper, chomping on a cigar, and swilling a highball -  he makes an indelible impression. An amalgam of Al Capone and Lucky Luciano, Rocco also resembles Robinson's Rico in the iconic 'Little Caesar.' (Even their names sound similar.) Both are crude, ruthless, and strangely vulnerable, yet Rocco may be even more sadistic. He gleefully whispers inaudible obscenities in Nora's ear, and in one of the movie's most memorable scenes, degrades a desperate, broken-down Gaye by making her sing for a much-needed drink. (He also complains about his exile to Cuba, claiming the U.S. threw him out of the country "like I was a dirty Red or something"…an ironic line, considering Robinson himself later would be accused of having Communist ties, and would ultimately testify as a friendly witness before the House UnAmerican Activities Committee, much to his colleagues' disgust.)

Frank, on the other hand, strikingly resembles Alan Squier, the hero of 'The Petrified Forest,' another disillusioned drifter searching for meaning who becomes one of several hostages terrorized by a vicious gangster on the lam (who just happens to be played by Humphrey Bogart in a star-making performance). Instead of a hotel, they're holed up in a restaurant, and instead of a hurricane, a dust storm howls outside. What's more, a bit of Rick Blaine from 'Casablanca' also lurks in Frank. Both men rebuff issues that don't concern them ("I fight nobody's battles but my own," Frank says at one point, echoing Rick's famous "I stick my neck out for nobody" comment in 'Casablanca'), but their suppressed sense of nobility eventually rises to the surface, forcing them to do the right thing. "When your head says one thing and your whole life says another, your head always loses," Frank says.

And if the ending of 'Key Largo' seems strangely familiar, it's because it was tangentially borrowed from Howard Hawks' adaptation of Hemingway's 'To Have and Have Not,' the first film to co-star Bogart and Bacall. A studio mandate prevented Hawks from using Hemingway's original ending, so when Huston and Brooks couldn't come up with a slam-bang finish for 'Key Largo,' Hawks suggested the climax in 'To Have and Have Not,' which works like a charm here, providing a classic showdown between Bogart and Robinson, two of the silver screen's toughest tough guys.

Huston wrings excellent work from all involved, especially Trevor, who won a Best Supporting Actress Oscar for her showy yet dimensional portrayal of a broken-down broad who'd sell her soul for a drink. Bogart is quietly intense in a largely passive role (he's even called a coward a couple of times by other characters) and Bacall underplays well, projecting an inner strength and conviction that infuses the film with essential soulfulness. Huston even subdues the normally cantankerous Barrymore, and the result is one of the actor's most restrained and effective performances. Yet all yield the spotlight to Robinson, who grabs it with relish and only occasionally relinquishes it to Trevor. Though Robinson would continue to act for another 25 years, Rocco was one of his last great parts, and he plays it to the hilt.

'Key Largo' occasionally gets bogged down in all of its eloquent talk, but on the whole it's an electric, engrossing film filled with excitement, terrific acting, and some important ideas. Call it a cerebral gangster movie, one that pays dutiful homage to the genre's core elements but elevates the content so the action resonates. While all the Bogart-Bacall films are great fun, this one flaunts a refreshing gravitas the others lack, making it a fitting coda for a legendary team. 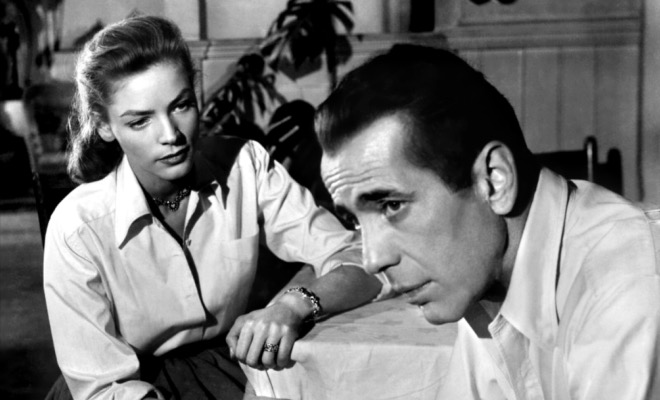 'Key Largo' arrives on Blu-ray packaged in a standard case. Video codec is 1080p/AVC MPEG-4 and default audio is DTS-HD Master Audio 2.0 mono. Once the disc is inserted into the player, the static menu with music immediately pops up; no previews or promos precede it.

Another terrific black-and-white transfer from Warner Archive, this 1080p/AVC MPEG-4 rendering boasts superior clarity, excellent contrast, and marvelous gray scale variance. Grain is well integrated and lends the picture a lovely film-like feel without calling undue attention to its advanced age, and only a couple of errant specks dot the print. Much of the action transpires in low light, but strong shadow delineation keeps crush at bay most of the time and produces some stunning silhouettes. Black levels are rich and deep, whites are crisp, and background elements are always easy to discern. Close-ups are especially sharp, highlighting Bogart’s ruggedness, Bacall’s unspoiled beauty, and Robinson’s blubbery mug, along with beads of sweat, hair follicles, and facial creases. Any digital enhancements escape notice, and no glaring imperfections crop up. ‘Key Largo’ was almost entirely studio shot, and much of the artifice is now easy to spot, but that’s a small price to pay for such a superbly restored image. Fans of Bogart and Bacall will be thrilled with this top-flight effort, which only makes us crave more Warner Archive classics on Blu-ray.

There’s a lot going on in the ‘Key Largo’ soundtrack - a hurricane, tense exchanges, and Max Steiner’s bombastic music score, to name a few - but the DTS-HD Master Audio 2.0 mono track handles all the aural challenges with aplomb. The well-balanced mix properly prioritizes dialogue and nicely integrates all the various effects, such as whistling wind, driving rain, rattling shutters, shattering glass, creaking wood, and rumbling thunder. All the conversations are easy to comprehend, and a wide dynamic scale beautifully showcases the dramatic highs and lows in Steiner’s music. Best of all, any hiss, pops, or crackles have been erased, and even during the most active sequences there’s not a hint of distortion. I usually don’t condone 5.1 remixes for classic films, but this track is so lively, I’d love to hear how a multi-channel presentation would sound. This mono track, however, is more than sufficient and serves this crackling drama well.

The only extra on the disc is the film’s original theatrical trailer (HD, 2 minutes), which highlights the terrific cast and explosive story.

The final screen pairing of Bogart and Bacall stands as the most serious and literate of their four films together, but ‘Key Largo’ still exudes a good deal of old-fashioned excitement. John Huston’s stirring adaptation of Maxwell Anderson’s play explores relevant themes while chronicling the tense standoff between a swaggering gangster and group of hostages holed up in a seaside hotel during a hurricane. Colorful performances from Edward G. Robinson, Lionel Barrymore, and Claire Trevor complement the more subdued work of Bogart and Bacall, and the electric interplay between all the actors is fascinating to watch. Warner Archive’s Blu-ray presentation contains no supplements, but the top-notch video and audio transfers help dull that disappointment. Though a bit talky at times, ‘Key Largo’ remains one of Hollywood’s best gangster movies, and Huston’s confident direction, powerful script, and A-list cast bring this blistering tale to brilliant life. Highly recommended.

Sale Price 19.99
Buy Now
3rd Party 14.34
In Stock.
See what people are saying about this story or others
See Comments in Forum
Previous Next
Pre-Orders
Tomorrow's latest releases