A man convicted of murdering his wife escapes from prison and works with a woman to try and prove his innocence.

Of the four movies Humphrey Bogart and Lauren Bacall made together, 'Dark Passage' is the forgotten stepchild. Sandwiched between 'The Big Sleep' and 'Key Largo,' Delmer Daves' innovative and suspenseful mystery-thriller caused barely a ripple at the box office upon its initial release. Maybe the gritty, post-war themes of isolation and paranoia hit too close to home, or the use of a subjective camera alienated audiences. Whatever the reason, 'Dark Passage' got a bum rap from critics and public alike. And while it may not rank up there with the best of Hollywood noir, the film flaunts enough style and substance to merit appreciation.

After World War II, filmmakers found the subjective camera a slick gimmick to add realism and flair to crime dramas. Robert Montgomery even shot an entire film, an adaptation of Raymond Chandler's 'Lady in the Lake,' from the first-person perspective, with his character's face appearing only in the reflection of mirrors, windows and water. Of course, by the mid-1940s, Montgomery's star stature had faded, so audiences didn't particularly miss his physical presence. Not so for Bogart, who in 1947 was still at the peak of his popularity. Audiences came to see Bogie and felt somewhat cheated when the first third of 'Dark Passage' featured only his inimitable voice. Still, Daves employs the subjective camera to superb effect. Love it or hate it, there's no denying the device quickly draws the viewer into Bogart's world and adds urgency, confusion, and a sense of unease to the film.

Yet in 'Dark Passage,' the subjectivity isn't all flashy technique — it serves a narrative purpose, and a clever one, too. Bogart portrays wrongly convicted wife-killer Vincent Parry, and as the movie opens, he stages a desperate escape from San Quentin prison that we see through his frantic eyes. On a deserted roadside, he's rescued by sympathetic socialite Irene Jansen (Bacall), who identifies with Parry's predicament and believes him to be innocent. Parry hides out in Irene's San Francisco apartment, narrowly evading her busybody friend Madge (Agnes Moorehead) and casual boyfriend Bob (Bruce Bennett). Of course he yearns to clear his name and root out his wife's real killer, but to freely roam the city, he needs a new face. A helpful cab driver (Tom D'Andrea) refers Parry to a renegade plastic surgeon (Houseley Stevenson) who alters his features. When the bandages come off a week later (during which time his best friend also winds up murdered), Parry looks exactly like — surprise! — Humphrey Bogart.

The artistry of 'Dark Passage,' however, extends well beyond the subjective camera. Daves filmed much of the drama on location in San Francisco, and the hilly landscape and majestic Golden Gate Bridge lend the story a coarse, realistic edge. He also favors the close-up to heighten tension and mood, as well as unveil a softer side of Bacall that her previous director, Howard Hawks, never explored. Hawks showcased Bacall's allure, but Daves photographs her like a glamorous movie star, with striking results.

Bacall must also carry the film's first third with her acting and presence, and quickly proves she's up to the task. While she never totally abandons the smoldering attitude that made her famous, she nicely tones it down in favor of a more sensitive image. Bacall's screen relationship with Bogart also evolves, becoming more mature and gentle. Gone are the wisecracks, nicknames and verbal one-upmanship that dazzled the masses. In 'Dark Passage,' their first movie as a married couple, their romance is more about aching need and deep, abiding love than boozy good times and lusty passions. Personally, I find the change fascinating, although it left contemporary audiences cold.

Caught up in a Hitchcockian wrong man scenario, Bogart also displays refreshing vulnerability and, at times, a palpable fear that gives his screen persona new dimension. He looks older, more weathered, a bit broken down, and although we know he'll rise to the occasion and eventually take control, a seed of doubt creeps into the equation. Typical of the post-war attitude, nothing in life is a sure thing anymore, not even Humphrey Bogart, and that unsettling edge helps fuel 'Dark Passage.' The always-marvelous Moorehead also excels (though perhaps a bit too much), adding some Freudian complexity to her icy performance. Magnetic, bold, and deliciously over the top, she steals every scene in which she appears — and that's tough to do when you're up against the likes of Bogie and Bacall.

Unfortunately, 'Dark Passage' will always be regarded as that "other" Bogart-Bacall film, despite the way it smoothly balances taut suspense and tender romance. Yet over time, Daves' stark, involving mystery has earned well-deserved respect, and holds up well today. Despite a couple of narrative hiccups and occasional languid pacing, the film provides terrific entertainment and the opportunity to savor one of Hollywood's most legendary love teams in its prime. 'Dark Passage' may remain the weakest of the Bogart-Bacall quartet, but in the company of 'To Have and Have Not,' 'The Big Sleep,' and 'Key Largo,' that ain't half bad. 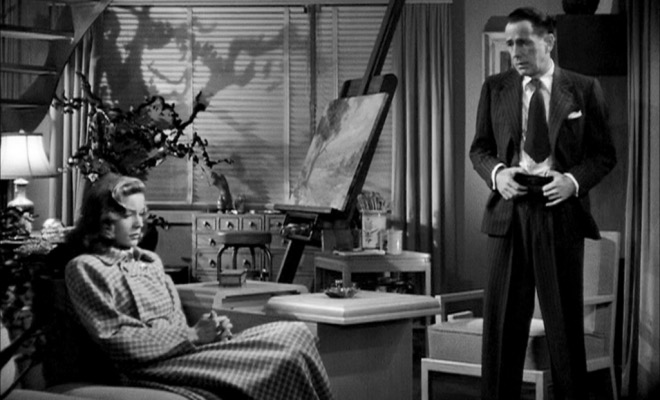 'Dark Passage' arrives on Blu-ray packaged in a standard case. Video codec is 1080p/AVC MPEG-4 and default audio is DTS-HD Master Audio 2.0 mono. Once the disc is inserted into the player, the static menu with music immediately pops up; no previews or promos precede it.

Warner Archive scores once again with another top-flight 1080p/AVC MPEG-4 transfer of one of its catalog classics. None of the age-related grit and speckles that occasionally cropped up in the 2003 DVD are present here, and the sharp, vibrant picture is a joy to behold from the first frame to the last. Grain is present, but seamlessly integrated, so the movie flaunts a wonderful film-like feel, and superior contrast and clarity bring out all the details of the authentic San Francisco locations. Excellent shadow delineation and gray scale variance augment the inventive noir photography, and breathtaking close-ups showcase Bacall's beauty, Bogart's ruggedness, and Moorehead's sharp features. Deep, inky blacks and crisp whites enhance the presentation, no crush or noise creeps into the image, and any digital enhancements escape notice. Warner Archive set a high bar with its previous Bogart-Bacall Blu-ray transfers, but 'Dark Passage' more than lives up to 'The Big Sleep' and 'Key Largo,' and is definitely worth an upgrade.

The DTS-HD Master Audio 2.0 mono track has been nicely cleaned up and provides clear, distortion-free sound. No hiss, pops, or crackles intrude, and a wide dynamic scale handles all the highs and lows of Franz Waxman's Jekyll and Hyde score. (The music often flips on a dime, alternating between highly melodramatic themes and understated variations on 'Too Marvelous for Words,' the romantic song that underscores the Bogart-Bacall relationship.) The subtle moan of a recurring foghorn adds essential atmosphere, and sonic accents such as blaring sirens, fisticuffs, and shattering glass are wonderfully distinct. Dialogue is always clear and easy to comprehend, and Bogart's early voiceovers are well integrated into the mix. Excellent fidelity and tonal depth also distinguish this nicely restored vintage track.

Thankfully, all the extras from the previous DVD have been ported over to this release.

If you're looking for a Bogart-Bacall primer, check out 'To Have and Have Not' or 'The Big Sleep' first. 'Dark Passage' is more for the connoisseur, but its style, depth, and entertainment value rival the duo's best work. This brooding, intriguing tale of a wrongly convicted murderer's quest to find his wife's killer occasionally sputters and stalls, but first-rate work from Bogart, Bacall, and Agnes Moorehead, and inventive direction by Delmer Daves mask the story's deficiencies. Warner Archive's Blu-ray presentation features first-rate transfers and solid extras, both of which help make this misunderstood classic well worth a second look. Highly recommended.

Sale Price 17.99
Buy Now
3rd Party 11.43
In Stock.
See what people are saying about this story or others
See Comments in Forum
Previous Next
Pre-Orders
Tomorrow's latest releases