Newly re-mastered in HD! In this classic film noir, a down-on-his-luck former boxing contender (John Payne, The Crooked Way, Hidden Fear), turned cab driver has to hide from the police when he s accused of murdering his badgering wife when her lifeless body turns up in the back of his cab. On the run and out of time, he needs to bring the real killer to justice before the cops and the thugs responsible for the set-up get their hands on him. Top-notch direction by the great Phil Karlson (Kansas City Confidential) and featuring a great cast that includes Evelyn Keyes (The Prowler), Brad Dexter (The Magnificent Seven), Frank Faylen (Riot in Cell Block 11), Peggie Castle (I, the Jury) and Jay Adler (The Killing).

"There are worse things than murder. You can kill someone an inch at a time."

John Payne fans must be loving the recent flurry of Blu-ray releases celebrating this affable actor's detour into the darkness of film noir. Over the past few months, such well regarded but largely forgotten Payne crime dramas as 'The Crooked Way' and 'Kansas City Confidential' have received high-def remasters, and now two more Payne pictures are primed to hit the home video market: 'Hidden Fear' and '99 River Street.' I haven't yet seen the former, but the latter, a taut, engrossing tale of theft, murder, and dirty double-crosses, stands as one of Payne's finest forays into the underworld.

More film noir on Blu-ray is always a good thing, but this specific spate of releases shines a spotlight on Payne's versatility, reminding us he was far more than the lawyer who defended Santa Claus in 'Miracle on 34th Street' or the polished leading man who supported the likes of Betty Grable and Alice Faye in a series of Technicolor Fox musicals. As he aged, Payne adopted a rugged hardness, evolving into a macho hero who fought his way out of shady situations, all while maintaining an appealing romantic sensitivity. And if any role encompasses those characteristics, it's Ernie Driscoll in '99 River Street,' arguably the best of Payne's handful of noir films.

An ex-prizefighter who once had a shot at the heavyweight title, Ernie has fallen on hard times and ekes out a living as a New York City cab driver. He hopes to save enough money to buy his own filling station, but his modest salary and dull dream aren't enough to satisfy the lofty desires of his restless, materialistic wife Paulne (Peggie Castle), who - unbeknownst to the hot-tempered Ernie - is dallying with slick gangster Victor Rawlins (Brad Dexter). Victor has just stolen a crop of diamonds and hopes to sell them for $50,000 so he and Pauline can run away to Paris, but the plan falls apart when the buyer (Jay Adler) finds out Victor killed the diamond merchant and Pauline witnessed the crime.

Meanwhile, Ernie tries to help his friend Linda James (Evelyn Keyes) land a role in a Broadway show, but a scuffle with the play's producers prompt them to report him to the police. That normally wouldn't be a big deal, but when Ernie and Linda discover Pauline's dead body in his cab's back seat an hour or so later, Ernie knows he's in big trouble and the victim of a vicious frame-up.

The rest of the film chronicles Ernie's attempts to elude the police, clear his name, and exact revenge on those who wronged him, all with Linda's able assistance. As the night wears on, the plot thickens, and plenty of violent confrontations ensue. (Amazingly, several critics termed '99 River Street' "gory" at the time of its release.) Though the story rarely rises above the mundane, it hangs together well, moves briskly, and features one notable twist. Screenwriter Robert Smith has an ear for noir dialogue and spices up the proceedings with both spirited and suggestive exchanges, while director Phil Karlson adeptly maintains tension most of the time. Saddled with a paltry budget, Karlson toils valiantly to overcome its constraints by sprinkling in a few creative shots and indulging his love of close-ups, both of which lend this B-grade thriller an elegance and intimacy its sister films lack.

Payne makes a believable everyman and nicely conveys the gut-twisting anguish that afflicts him when he discovers he's been duped...not once, but twice, and by two different women. Keyes, who's best known for playing Scarlett O'Hara's younger sister (the title of her best-selling autobiography) in 'Gone With the Wind' and second fiddle to Marilyn Monroe in 'The Seven Year Itch,' really sinks her teeth into her role and files a surprisingly astute and dimensional portrayal. Early in the film, Keyes appears to be overacting - quite badly - but there's a definite method to this madness that quickly becomes evident and ultimately fuels respect for her underrated talent. Though she appeared in many notable movies, Keyes never quite cracked Hollywood's A list, but she provides this film with a couple of potent shots in the arm and some of its most memorable moments.

The supporting cast and even a few bit players also assert themselves well, adding essential atmosphere, humor, and a cynical edge to this hard-boiled yarn. Peggie Castle only has a few scenes, but she steals all of them as the wanton, shrewish Pauline, who seems just as turned on by the idea of money as she is by the opposite sex. Beautiful, calculating, and defiant, Castle feels right at home within the grimy confines of noir, and the icy blonde plays off both Payne and Dexter with equal aplomb. (We only wish we could see more of her.) Frank Faylen also shines as Ernie's ever-helpful but under-appreciated best friend, and Dexter, Jay Adler (brother of noted acting teacher Stella Adler), and Jack Lambert all put their individual stamp on generic tough-guy parts.

'99 River Street' may not be the slickest, darkest, or most intricate film noir, but it's a very solid genre entry that's directed and acted with confidence and panache. A meat and potatoes meal rarely outclasses haute cuisine, but it often satisfies our cravings, so if you're a classic movie fan hungry for an absorbing crime drama, this straightforward, no-nonsense thriller hits the spot...and occasionally the bull's-eye. 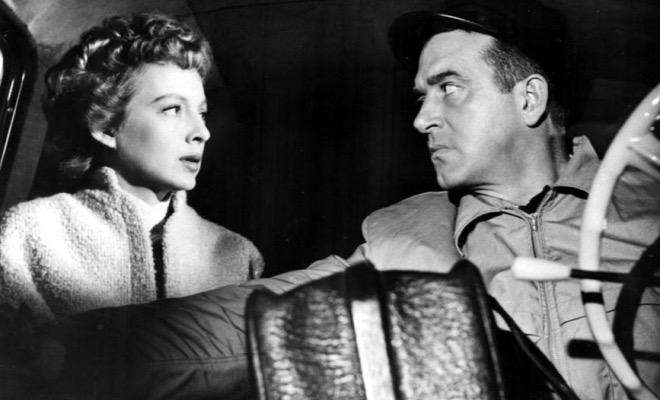 '99 River Street' arrives on Blu-ray packaged in a standard case. Video codec is 1080p/AVC MPEG-4 and audio is DTS-HD Master Audio 2.0 mono. Once the disc is inserted into the player, the static menu with music immediately pops up; no previews or promos precede it.

Kino Lorber continues its string of strong film noir transfers with this newly remastered 1080p/AVC MPEG-4 rendering. Though at times the image appears slightly washed out and some age-related nicks and marks still dot the print, superior clarity enhances the film's in-your-face intensity and brings the gritty cityscape to life. Faint but noticeable grain maintains the feel of celluloid, and a nicely varied gray scale heightens details. Blacks are rich and deep, and though almost all of the movie takes place at night, solid shadow delineation keeps everything in focus. Director Phil Karlson employs plenty of close-ups, but they're all well defined, showing off Payne's square-jawed demeanor, the fresh-faced loveliness of Keyes, and Castle's cool glamor. Some scenes seem a bit softer than others, but overall this is a pleasing transfer that replicates the movie's natural look and honors all the classic elements of film noir.

The DTS-HD Master Audio 2.0 mono track supplies clear, well-modulated sound that instantly immerses us in the action. There's not much music in the film, but when the score begins to swell, it fills the room with ease, and no defects like hiss, pops, or crackles intrude. Sonic accents, such as fisticuffs, gunfire, and revving car engines, are crisp and distinct, and all the dialogue is easy to comprehend. Though this is far from a knock-your-socks-off track, the vibrant audio pumps up the excitement quotient of this low-budget film.

Just a couple of supplements enhance this film noir release.

Tough and twisty, with a smattering of sex appeal and grit galore, '99 River Street' is a highly entertaining low-budget film noir that takes us on a dusk-to-dawn journey through New York's underworld. As a cab driver framed for the murder of his two-timing wife, John Payne files another stellar noir portrayal, and Evelyn Keyes, as his perky, intrepid gal Friday, relishes her surprisingly dimensional role. Efficient direction from Phil Karlson and fine work from a colorful supporting cast enhance this fast-paced, rough-and-tumble tale. Kino Lorber's Blu-ray presentation features excellent video and audio transfers and a lively commentary track, all of which make this dark crime thriller easy to recommend to film noir fans.

Sale Price 8.29
List Price 29.95
Buy Now
3rd Party 8.48
In Stock.
See what people are saying about this story or others
See Comments in Forum
Previous Next
Pre-Orders
Tomorrow's latest releases