In Kansas City Confidential, four robbers hold up an armored truck, getting away with over a million dollars in cash. Joe Rolfe (John Payne), a down-on-his-luck delivery driver who is accused of involvement in the heist, sets out to discover who set him up and to exact revenge. He follows a trail that leads him to a web of hired killers and corrupt police in Mexico. Kansas City Confidential was the source of inspiration for Quentin Tarantino’s Reservoir Dogs. An imaginative film noir classic, this is a fast-paced and highly entertaining gem!

I recently reviewed 'The Crooked Way,' a taut, inventive film noir starring John Payne, best known as the dashing lawyer who defends Kris Kringle in a court of law in the perennial holiday classic 'Miracle on 34th Street.' 'The Crooked Way' altered Payne's image, transforming the affable leading man into a brooding tough guy. A series of war movies, westerns, and swashbucklers followed, but three years later, Payne returned to the nefarious world of noir to star in 'Kansas City Confidential,' a low-budget crime drama about a bank heist gone awry. Lean, mean, and refreshingly original, this gritty film has developed a faithful following, even catching the fancy of writer-director Quentin Tarantino, who reportedly weaved a few of its elements into his first directorial effort, 'Reservoir Dogs.'

'Kansas City Confidential' has little to do with the Midwestern city in its title (most of the movie takes place in Mexico), but that's where its twisted plot commences. As the film opens, a mysterious man (Preston Foster) masterminds what he believes to be the perfect crime. He recruits three desperate thugs to help him, but wears a mask while individually interviewing them to shield his identity. He also gives each of them a mask so they can't recognize their cohorts, making them simultaneously "cop-proof and stool pigeon-proof." Each gets a ripped-in-half King playing card as well, which he will later present to the ringleader to claim his share of the take when they all rendezvous at a secret location after the post-robbery furor has died down.

The gang pulls off the heist without a hitch, then each member of the quartet goes his separate way to lay low while an innocent floral delivery driver is framed for the crime. That driver is Joe Rolfe (Payne), a decorated war hero who's also an ex-con supposedly trying to go straight. After the police verify his alibi, they release him, but not before he learns the insurance company will pay 25% of the robbery take to anyone who recovers the stolen money. That choice morsel piques Rolfe's interest and, along with a desire to clear his tarnished reputation, inspires him to track down the loot and bring the gang that tried to send him up the river to justice.

Plenty of twists and turns abound. Some are clever, others are contrived, but the well-constructed narrative and straightforward direction by journeyman Phil Karlson foster an urgent, authentic feel that keeps us involved. Though we all know Rolfe will eventually unravel the gang leader's foolproof plan, it's fun to watch him do it, especially when the honcho's upstanding daughter Helen (Coleen Gray) - who's ironically studying to be a lawyer - unexpectedly shows up and complicates matters by taking a fancy to Rolfe. Her father's backstory, split loyalties, and personal motives also fuel some key revelations that take the story in exciting directions.

The little-known cast that also includes a young Neville Brand and younger Lee Van Cleef heightens the realistic aura, but Payne and especially Foster drive the film. Both file strong portrayals, shading their roles with subtleties that add dimension and interest to characters who - in lesser hands - could be cardboard cutouts, and Karlson ramps up intensity with in-your-face close-ups that put us in the thick of fight scenes and heated confrontations. Though classic noir touches such as deep shadows, swirling cigarette smoke, and a double-crossing femme fatale are absent, a prevailing toughness permeates the atmosphere and raises the story's stakes while mitigating the movie's blander aspects.

Karlson would go on to direct a couple of lurid 1970s cult classics - 'Ben' and 'Walking Tall' - and 'Kansas City Confidential' helped lay the groundwork for them. Its reputation has increased over the years, and it now stands as a noteworthy second-tier film noir. It makes a nice companion piece to Payne's 'The Crooked Way,' and makes us crave more Blu-ray releases in the same vein. If you're a fan of the genre, you'll certainly want to rediscover this rough diamond in the rough. 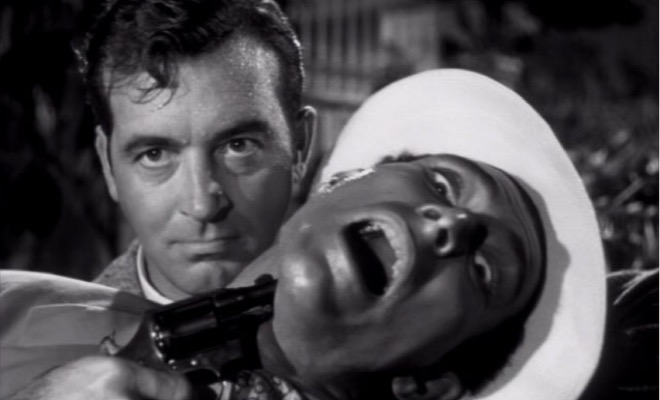 'Kansas City Confidential' arrives on Blu-ray packaged in a standard case. Video codec is 1080p/AVC MPEG-4 and audio is DTS-HD Master Audio 2.0 mono. Once the disc is inserted into the player, the static menu without music immediately pops up; no previews or promos precede it.

Though a fair amount of nicks and marks occasionally dot the image, this 1080p/AVC MPEG-4 transfer from The Film Detective is quite impressive. Clarity and contrast are excellent, with rich black levels and terrific gray scale variance lending the picture a lustrous sheen. Grain is evident, enhancing the texture of this tough crime tale, but it remains well integrated and consistent throughout. Tight close-ups are regularly employed and exude striking degrees of detail, with beads of sweat, stubble, and facial contours all razor sharp, while good shadow delineation heightens the impact of the movie's noir touches. No noise, crush, or other digital issues afflict the transfer, and no noticeable enhancements seem to have been applied. Though a cleaner source would have made the film leap off the screen, noir aficionados still should be pleased by this strong effort.

The DTS-HD Master Audio 2.0 mono track supplies clear, well-modulated sound, despite the occurrence of intermittent, age-related pops and crackles. A wide dynamic scale keeps distortion at bay, hiss is absent even during quiet moments, and sonic accents like gunfire and revving engines are crisp and distinct. Fine fidelity enhances the impact of the foreboding music score, and all the dialogue is properly prioritized and easy to understand. Low-end tones are especially weighty, heightening the presence of this nicely balanced track.

There are no supplements whatsoever, not even a trailer.

Taut, tough, and well-acted, 'Kansas City Confidential' packs a potent noir punch, thanks to an original story with some clever twists and turns. The chronicle of a "perfect" bank robbery that goes off the rails features well-crafted performances by John Payne and Preston Foster and realistic, no-frills direction that keeps us focused on the characters and plot. The Film Detective's Blu-ray presentation includes zero supplements, but the above-average video and audio transfers help bring this low-budget, independent crime drama to brilliant life. Though more noteworthy and polished titles eclipse it, 'Kansas City Confidential' remains a solid entry in the B-movie film noir echelon and earns a hearty recommendation.