War hero recovers from amnesia & is confronted by his criminal past.

Imagine sustaining an injury that robs you of your memory. You wake up one morning and can't remember what happened yesterday, let alone a decade ago. Experiences, relationships, familiar surroundings, likes, and dislikes all vanish, and no therapy can reclaim them. Then imagine what your reaction might be if you discovered you used to be a ruthless criminal with ties to a vicious gangster ring. The kind of reprehensible person society abhors turns out to be you, and you have no idea how you became that way. Are you inherently bad or a victim of circumstance? Is it possible for you to walk the straight and narrow or are you destined to live life on the wrong side of the law? And will your past sins or any unsettled scores come back to haunt you?

Such are the dilemmas facing Eddie Rice (John Payne) in 'The Crooked Way,' a minor but effective film noir from director Robert Florey. Though amnesia has become a convenient narrative cliché for movies and TV soap operas over the years, providing instant - if often cheesy - conflict, tension, and intrigue, 'The Crooked Way' treats the condition with respect, and proves it can be a clever and exciting plot device when thoughtfully employed. Some rough edges notwithstanding, Florey’s film is a taut, engrossing, and efficient thriller that keeps us guessing and builds to a satisfying climax.

When we first meet Eddie, he's about to be released from a military hospital after a five-year stint in the mental ward. A decorated World War II vet who was awarded the Silver Star for his heroism, Eddie was wounded in battle and the inoperable shrapnel lodged in his brain has caused "organic amnesia," a permanent affliction. All his pre-war memories have been irreversibly erased, and his only hope of recovering them is through people he once knew filling in the blanks. Yet finding these old acquaintances is akin to finding needles in a haystack. His doctor suggests he return to Los Angeles, where some records indicate he once lived, to begin his journey of personal discovery.

True to Hollywood form, as soon as Eddie walks off the train in L.A., he walks into trouble. At Union Station, he's recognized almost instantly by police lieutenant Joe Williams (Rhys Williams), who's quite familiar with him. Except the Eddie that Williams knew had the last name Riccardi and was anything but an upstanding war hero. According to Williams, Eddie Riccardi was a thug with a record a mile long, and before he left for battle, he sold out his gangster cohort Vince Alexander (Sonny Tufts) during their robbery trial, sending Vince up the river for years while he got off scot-free.

Williams advises Eddie to leave town before the vengeful Vince gets wind of his arrival, but Eddie, who can't believe he was such a despicable, unscrupulous person, craves more details. His old, bitter flame, Nina Martin (Ellen Drew), spots him leaving the precinct, and she alerts Vince, who embroils her in a plot to sandbag Eddie. And before Eddie can catch his breath, he finds himself framed for murder and entangled in a deadly web of deceit that yields disturbing revelations about his shady former life. A race against time ensues, as Eddie tries to resist the underworld's seductive allure, vanquish Eddie Riccardi, and forget the past he's been trying so hard to remember.

While most noir mysteries focus on the hunt for a killer, infiltration of a nefarious crime ring, or systematic destruction of a clueless average Joe by a double-crossing femme fatale, 'The Crooked Way' takes a different tack, incisively depicting one man's search for his own identity. Such an introspective - and refreshing - twist elevates this tale above others in its B-movie class and lends it a greater degree of intimacy. With such high personal stakes, it's tough not to become invested in the main character and root for him to fill in his empty slate and reclaim a lost life. Florey directs with a firm hand and never allows the film to veer down a sentimental path. Noir elements abound, and some welcome artistry enhances and tempers the hard-driving story.

Payne, of course, is best known as the affable lawyer who accepts the impossible task of defending Santa Claus in a court of law in the immortal holiday classic ‘Miracle on 34th Street.’ He’s also a veteran of many musicals, so ‘The Crooked Way,’ produced two years after ‘Miracle on 34th Street,’ proved to be a change-of-pace role for the strapping leading man, and he - along with a cast of largely little-known actors - rises to the occasion. Though he can handle himself in a fight and believably wield a gun, Payne is at his best in the early part of the film, faking his way through uncomfortable situations in an effort to discern bits of information that might shed some light on his prior existence. His everyman good looks and matter-of-fact manner also endear him to us and make it easy to forgive his character’s shortcomings.

Tough, rough, and surprisingly violent, ‘The Crooked Way’ pulls few punches, and its low budget works in its favor, sharpening the movie’s well-honed edge and heightening its degree of realism. Though it may not enjoy a rarefied spot on the film noir rankings list, its gritty presentation, fine performances, and interesting plot grab and hold our attention, and make this dark, brooding study of amnesia ironically memorable. 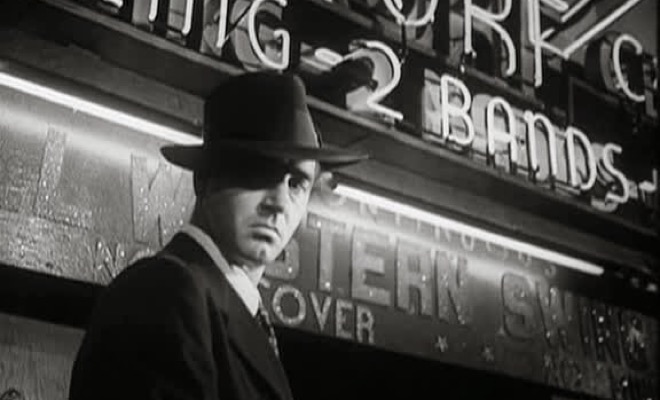 'The Crooked Way' arrives on Blu-ray packaged in a standard case. Video codec is 1080p/AVC MPEG-4 and audio is DTS-HD Master Audio 2.0 mono. Once the disc is inserted into the player, the static menu with music immediately pops up; no previews or promos precede it.

Excellent clarity and contrast - essential components of a successful film noir transfer - distinguish this 1080p/AVC MPEG-4 rendering from Kino Lorber, but other elements conspire against it. A bit of image instability (especially evident during the opening titles), some odd white horizontal lines that permeate a few scenes, and a couple of missing frames can't escape notice, and a general smattering of stray marks and vertical lines also disrupt the film's flow. Grain levels fluctuate somewhat, but overall the image sports a slick, smooth look. Rich, deep blacks produce some striking silhouettes, and good gray scale variance lends the picture necessary depth. Close-ups are sharp enough and shadow detail is fine as well. A few instances of crush occasionally crop up, but noise isn't an issue, and the presentation appears free of digital enhancements. Though the source material is far from perfect, its superior clarity saves the day and helps salvage this hot-and-cold transfer.

The DTS-HD Master Audio 2.0 mono track exhibits some mild surface noise that's only noticeable during quiet stretches, but otherwise supplies clear, well-modulated sound. Other age-related imperfections, such as pops and crackles, are absent, and no distortion creeps into the mix, thanks to a wide dynamic scale that handles all the highs and lows with ease. The music score sounds appropriately robust, sonic accents like gunfire and fisticuffs are crisp and distinct, and all the dialogue is easy to comprehend. A bit of dropout occasionally afflicts the track, but the instances are rare and last only a split second.

A trio of theatrical trailers for other movies - 'A Bullet for Joey,' 'He Ran All the Way,' and 'Witness to Murder' - comprise the disc's supplemental material.

Another little-known film noir that packs a decent punch, 'The Crooked Way' allows polished leading man John Payne the chance to explore his dark, tough side, and he makes the most of the opportunity. As an amnesia victim and war hero who discovers his past life was far from reputable, Payne shines, and his sterling portrayal elevates this engrossing underworld mystery. The Blu-ray presentation from Kino Lorber, despite some intermittent video hiccups and a dearth of supplements, makes the grade, and the studio deserves kudos once again for rescuing a forgotten film from obscurity. Though far from an iconic film noir, 'The Crooked Way' will please fans of the genre and is certainly worth a look.

Sale Price 19.99
List Price 26.24
Buy Now
3rd Party 19.99
In Stock.
See what people are saying about this story or others
See Comments in Forum
Previous Next
Pre-Orders
Tomorrow's latest releases