Newly re-mastered in HD! Dame-Hungry Killer-Cop Runs Berserk! Edmond O'Brien (D.O.A., White Heat) stars in this crime drama about a crooked and brutal police detective who steals $25,000 from a criminal he murders and becomes the target of a colleague's investigation... more and more he realizes that he must kill again to cover his tracks. Co-written by noir specialist John C. Higgins (He Walked by Night, T-Men, Raw Deal) and co-directed by Howard W. Koch (Big House, U.S.A.) and the film s star O Brien, the first of only two features he ever directed. The wonderful cast includes John Agar (Journey to the Seventh Planet), Marla English (The She-Creature), Carolyn Jones (The Addams Family), Claude Akins (Rio Bravo) and William Schallert (The Patty Duke Show).

It's nice when a movie just lets itself be what it is without overstuffing the story with too many themes. A thriller can be a thriller without over-emphasizing the moral of the story. While it's great to have a theme to the picture so that it's more than a run-of-the-mill B-movie drama, it helps when a simple thriller doesn't bog itself down and loses the thrust of the action. 1954's 'Shield for Murder' Co-directed by and starring Edmond O'Brien and starring John Agar is a solid, well-constructed thriller who finds himself on the wrong side of the law after letting temptation get the better of him.

Detective Lt. Barney Nolan (Edmond O'Brian) is a veteran officer who has seen it all before. He' seen society at it's best and he's seen it at its worst. Unfortunately, he's seen too much of the worst of his time on the force has taken its toll. That darkness has worn him down and when he sees an opportunity for taking the easy way to a better life, he guns down the lowlife criminal Packy Reed (Hugh Sanders) and steals the $25,000 he was carrying. Captain Gunnarson (Emile Meyer) and Barney's partner Detective Mark Brewster (John Agar) accept Barney's story that it was a self-defense killing, but things don't quite add up.

When Mark starts to hear stories about a huge wad of cash that Packy was carrying from goons like Fat Michaels (Claude Akins) and Laddie O'Neil (Lawrence Ryle), he starts to believe that his partner has gone off the deep end. Even Barney's main gal Patty Winters (Maria English) has her doubts about him, especially when Barney plots a big escape plan to get them out of the country for a "new life." But Barney's plan doesn't go according to plan and the death toll starts to mount leaving Mark, Captain Gunnarson, and the rest of the police force that Barney must be stopped, at any cost. 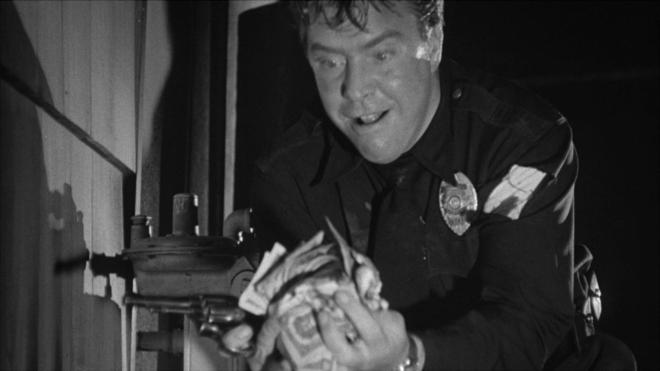 Any time an actor serves as a director of their own film, even if it's in the co-director capacity, it's easy to assume that the film is going to be some sort of a vanity project. For 'Shield for Murder,' O'Brian is certainly the focal point of the film, and he does carry the most dramatic weight, but he most certainly is not the hero nor does he get the best material to work with. Co-directed by Howard Koch from a script by Richard Alan Simmons and John Higgins from the William McGivern novel, 'Shield For Murder' plays closer to the range of a "rogue cop" thriller than something with a strict moral message that so often would drag down other 50s era thrillers of the period. To this end, O'Brian does a fantastic job of playing a conflicting empathetic character where it's easy to understand his actions, but the audience isn't forced to condone them.

While Edmond O'Brian is doing his thing as Barney, John Agar's Mark does a fantastic job of playing the conflicted partner and friend. It's nice to see Agar in a role that is a departure from the number of westerns and B-level sci-fi flicks that featured his grinning mug. He also does a fine job of playing what amounts to a supportive role as a man questioning his loyalties. There is a lot of great character material here and O'Brian and Agar play well together in the few scenes they share.

The film may not be perfect, it lumbers around a little a the front end of things, but once it gets going, it's difficult to not be sucked into the drama. It's almost like knowing a train accident is about to happen. You can see the derailment a mile down the tracks but are powerless to stop it, you're just along for the ride. The film plays quick with its theme that a bad cop isn't above the law, but it also grounds itself in an understanding how a good man can go bad. 'Shield for Murder' is a solid 82 minutes of entertainment that doesn't overstay its welcome.

'Shield for Murder' arrives on Blu-ray courtesy of Kino Lorber and their Studio Classics line. Pressed onto a Region A BD25 disc, the disc is housed in a standard Blu-ray case and opens to a static image main menu with traditional navigation options.

'Shield for Murder' arrives with a pretty decent newly remastered 1.75:1 1080p transfer. Film grain is intact and there is a pleasing amount of detail to be gleaned from the image. However, some focus issues baked into the film keep several moments of the film from looking as sharp or detailed as they could. The print sourced for this transfer is in relatively good shape, some stray scratches and speckling surrounding optical effects is apparent, but that's the worst of it. The grey scale is fairly stable allowing for blacks to approach their desired inkiness, but there is a haziness to the image that keeps true blacks in a state of shadowy grey. Whites are stable without any drastic contrast issues or blowouts. All around this is a very good transfer for such a deep back catalogue title.

'Shield for Murder' comes packed with a strong and stable English DTS-HD MA 2.0. Dialogue is crisp and clean and keeps front and center as it should. Sound effects are pretty tepid and have a canned tinny quality to them. There is a little sense of space and atmospherics, but not a whole lot given the original audience mix wasn't built for anything beyond a mono mix. The score by Paul Dunlap does a good job of balancing things out and keeping the track feeling lively. Levels are even without any need to monitor volume. There is some slight age-related hiss and a couple pops here and there, but for a film that is over 60 years old, this isn't half bad.

'Shield for Murder' is a solid and entertaining thriller. Edmond O'Brian and John Agar do a great job as partners found on the opposite side of the law. The film may be short, but it moves fast and is a good bit of fun that doesn't overthink itself. Kino Lorber has brought 'Shield for Murder' to Blu-ray in fine order with a solid video transfer and a decent audio mix. Extras are only a collection of trailers. I'm calling this one as being worth a look.

Sale Price 27.49
List Price 29.95
Buy Now
3rd Party 25.96
In Stock.
See what people are saying about this story or others
See Comments in Forum
Previous Next
Pre-Orders
Tomorrow's latest releases