Newly re-mastered in HD! American policeman Mike Brent (John Payne, 99 River Street, The Crooked Way) arrives in Denmark to help clear his sister (Natalie Norwick, 23 Paces to Baker Street) from a murder she hasn't committed, even though all the evidence leads to her being the murderer. Mike starts working with the Danish Police and begin to suspect a group of Copenhagen counterfeiters of the same crime. Co-written and directed by the great Andre De Toth (Pitfall) and wonderful performances by Alexander Knox (The Vikings) and Conrad Nagel (The Divorcee).

When there are so many famous entries into a particular genre, it's hard to notice the little films that maybe weren't as popular, but were still very good. Film Noir detective flicks are especially a tough genre. When you've got movies like 'The Big Heat,' 'The Maltese Falcon,' and 'Double Indemnity' - smaller movies like Andre de Toth's 1957 thriller 'Hidden Fear' starring John Payne, Natalie Norwick, and Alexander Knox didn't get their chance to shine. Thankfully Blu-ray rectifies this oversight. While keeping with the traditional Film Noir staples of a hardened detective and a potentially lethal femme fatale, it's fish-out-of-water aspects keep the film exciting and intriguing.

American police officer Mike Brent (John Payne) has to travel to Denmark for a case. Not one he wants to or should be investigating, but one he has to. His sister Susan (Natalie Norwick) has been charged with murder. Brent needs to just look at his sister to know she didn't do it, but all of the evidence points her way, perhaps a little too much evidence. With the Copenhagen police keen on wrapping the case up as quickly as possible, Brent is put in the precarious position of conducting an illegal investigation in order to clear his sister's name. When he's able to turn up evidence that provides some doubt of the case against his sister, the Copenhagen police allow Brent to take the lead. What Brent and the local authorities don't expect to uncover is an international counterfeiting scheme involving some of the most powerful and influential people in Europe. People who are more than willing to kill a detective from another country to keep their lucrative scheme in place and their identities a secret.

If you've ever seen 1953's 'House of Wax,' then you know director Andre de Toth has a knack for taking his time to build suspense and then deliver a big payoff. 'Hidden Fear' follows the director's best tendencies. This film takes its time to build. We're introduced to John Payne's Mike Brent as he arrives at the Copenhagen police department where his sister is being held. Since he's a cop and family, he's being given extra special consideration. The local cops aren't looking for his help, but he's going to give it to them anyway by slapping around his sister. It's a shocking moment. This is the guy that's supposed to be a "hero" of sorts? It turns out he had his reasons and there is plenty of back history between these siblings that keeps Brent a surly sour individual. But it's because of how his sister responds, he knows the truth deep in his gut. He knows his sister has a secret or two of his own and his own personal investigation can move on. 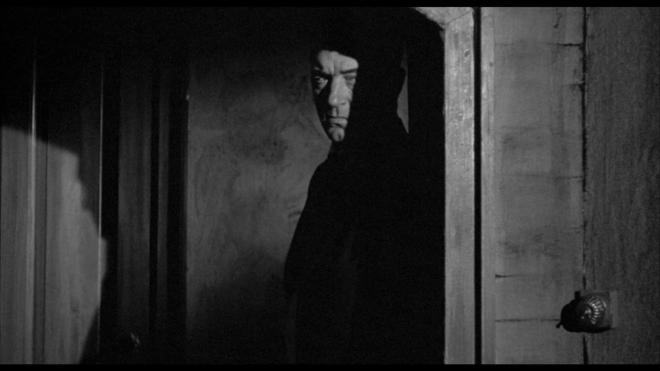 Brent is the best sort of Film Noir anti-heroes. We know we shouldn't like him. Within the first few moments of being introduced to the man we learn he's not the greatest guy in the world, but through it all, he has some sort of charm to him that makes him an interesting person to follow. Small turns of phrase, seemingly innocent questions, little actions all add up to an inquisitive mind that is working overtime mining information from people without their knowing. He isn't heartless, he's determined and that is what makes him good at what he does. Payne effortlessly pulls off this character. As great as John Payne is, a grizzled detective is only as good as the lady he's left to work off of. In this case, it's Anne Neyland as the vixen Virginia Kelly. It's understandable why Brent would fall for the woman, and equally understandable are his reasons for not completely trusting her. I can't really say too much more about this since it leads to a few plot spoilers, but Kelly's presence helps 'Hidden Fear' keep to the typical Noir Detective mold.

Given that this film was shot entirely in Copenhagen, 'Hidden Fear' is more than your average detective flick. In fact, given other movies of this type, it works as a sort of Film Noir cousin to other movies like 'Brannigan,' 'Coogan's Bluff,' and 'Black Rain.' Because I've had an established soft spot for those movies, I really took to 'Hidden Fear.' I'm the first to admit that it's far from perfect, it's a little languid in places and the film's climax may seem a little too neat for some, but the rest of the adventure is worth the ride. At a swift 80 minutes, there's little time for boredom and the film never overstays its welcome. If you're someone who enjoys their detectives rough around the edges with a stiff attitude, make sure to keep 'Hidden Fear' on your radar.

'Hidden Fear' arrives on Blu-ray courtesy of Kino Lorber and their Studio Classics line. Pressed on a Region A BD25 disc, the disc is housed in a standard Blu-ray case. The disc opens directly to a static image main menu with traditional navigation options.

Newly remastered in HD for this release, 'Hidden Fear' arrives with a strong 1.85:1 1080p transfer. With a thin layer of visible film grain apparent, the image maintains a pleasing amount of detail throughout this presentation. The daylight scenes look pretty fantastic and allows the audience to take in the Danish landscapes and Copenhagen scenery, but it's the deep, dark, and inky night scenes that really bring this release home. Black levels are rich and inky and the film's even greyscale allows for plenty of shadow separation giving the image a sense of dimension. It helps that the film grain is stable through most of these scenes, although there are a few moments here and there where the grain field can appear a bit noisy in places. The print sourced for this transfer appears to be in decent shape, a few scratches here and there and a couple moments of speckling is the worst of it, nothing too regular or consistent to be noteworthy. All around a pretty great looking image.

'Hidden Fear' arrives on Blu-ray with a decent, but not amazing English DTS-HD MA 2.0 mix. While dialogue is clearly heard throughout, it can be pitched a bit too high, especially if the person in question already has a high voice. There isn't any dramatic distortion effect or anything, but the higher registers can sound a bit sour. The film's score by Hans Schreiber kicks up the jazz notes well enough and provides the track a nice sense of balance. The track is in decent shape, there were a couple brief moments of hiss, but no pops or breaks to speak of. All around this is a decent track that gets the job done.

If you're at all hungry for a solid suspense flick with a little international flair, Andre de Toth's 'Hidden Fear' should fit the bill nicely. It plays to the classic Film Noir conventions while still managing to be its own thing and offer its own unique take on this type of story. Kino Lorber brings the film to Blu-ray in fine order. The image quality is pretty fantastic given the film's age, and the audio does a solid job as well. Extras are a collection of trailers. For an enjoyable, fun little detective yarn you likely missed, consider 'Hidden Fear' as worth a look.

Sale Price 15.74
List Price 29.95
Buy Now
3rd Party 10.25
In Stock.
See what people are saying about this story or others
See Comments in Forum
Previous Next
Pre-Orders
Tomorrow's latest releases