The Whistle at Eaton Falls

Flicker Alley once again brings a lost film back from the dead, and though The Whistle at Eaton Falls drags on a bit too long, it remains an insightful semi-documentary chronicle of labor and management tensions at a rural New England plastics factory. Lloyd Bridges leads an accomplished cast that includes such future stars as Ernest Borgnine, Anne Francis, and Arthur O'Connell, while director Robert Siodmak brings his customary craftsmanship to the understated tale. The stunning 2K restoration, remastered audio, and a nice slate of supplements add luster to this forgotten classic that's most definitely Worth a Look.

"You can't buck the future. You've got to become a part of it."

The clash between tradition and progress, manpower and automation, and labor and management have been around since the dawn of the Industrial Age, but in the years following World War II the issues finally hit Hollywood's radar. On the Waterfront is the most famous film of the period to address the tensions, but three years before Columbia produced that masterpiece, the studio released a far more modest movie chronicling the impact of industrial evolution on a small manufacturing town in rural New Hampshire. The Whistle at Eaton Falls barely caused a ripple at the box office upon its premiere in 1951 and vanished from view soon afterward,  but Flicker Alley has rescued the film from oblivion, painstakingly restored it, and given classics mavens a chance to rediscover this finely crafted - if not completely successful - movie from acclaimed director Robert Siodmak.

After the president of the struggling Doubleday Plastics factory dies in a plane crash, his widow Helen (Dorothy Gish) - against the advice of her lawyer - taps union leader Brad Adams (Lloyd Bridges) to succeed him. Helen hopes Brad can bridge the gap between the dissatisfied workers (who fear a massive wave of layoffs) and number-crunching executives who believe sweeping changes are required to keep the factory both viable and competitive in an increasingly cluttered market. Mass production of plastic flatware and TV knobs by other companies shines a glaring beacon on Doubleday's outmoded methods, but using more efficient, technologically advanced, and expensive machines that can be run by fewer workers doesn't sit well with the rank-and-file, who face an uncertain economic future if they lose their jobs.

The workers initially view Brad as an ally, but as he discovers the desperate situation facing the company, he realizes tough choices must be made to ensure the factory stays in business. That sets up a showdown between Brad and his former union that threatens to disrupt the peace of the tiny town of Eaton Falls and test the mettle of its residents.

Shot largely on location in Massachusetts (a few scenes were even filmed in producer Louis de Rochemont's family home), The Whistle at Eaton Falls adopts a semi-documentary style that mirrors such 1940s successes as The House on 92nd Street, 13 Rue Madeleine, and Call Northside 777. Siodmak, best known for helming such iconic film noirs as The Suspect, The Spiral Staircase, The Killers, and Criss Cross,  perfectly captures the local flavor of a tiny town that's beholden to the factory that employs most of its population. Realism abounds, but comes at the expense of a compelling plot. Hints of romance and skullduggery pepper the story, but there's more hand-wringing and soul-searching than conflict and action in the script. The labor-management tensions never bubble over like we expect, and as a result, the narrative struggles to sustain itself over the course of 96 minutes. 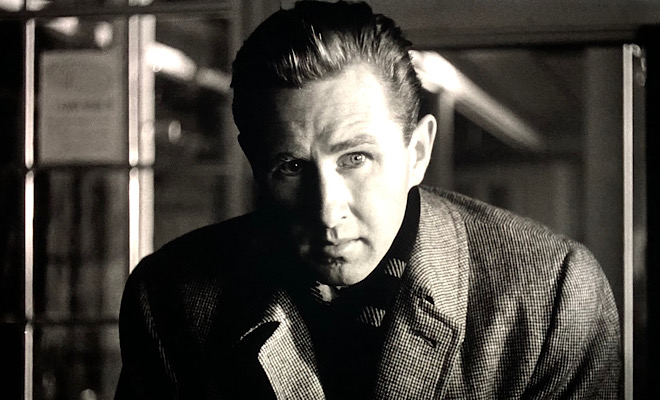 Thankfully, strong performances by the impressive cast help maintain interest. Bridges leads the way in one of his early starring roles, projecting both toughness and sensitivity as a man who's thrown into a job for which he's hardly qualified, yet must make life-changing decisions that affect hundreds of people. His square-jawed demeanor serves the character well, and in a couple of shots where he holds a cigarette, raises an eyebrow, and makes a deadpan pronouncement, he looks eerily like the frazzled airport executive he would so memorably portray three decades later in the classic comedy Airplane!

Dorothy Gish, the younger and less famous sister of Lillian Gish, also gets above-the-title billing, but only has a few scenes and is overshadowed by an array of up-and-coming actors, most of whom would soon make notable splashes. The Whistle at Eaton Falls marks the film debut of Ernest Borgnine (although his second movie, China Corsair, would be released first), who files a winning portrayal as Brad's union successor. Borgnine's gruff charm plays nicely against the quiet sincerity of Arthur O'Connell, and it's a treat to see the two together 20 years before they would share the screen in the original - and best - version of The Poseidon Adventure. MGM musical star Carleton Carpenter (of "Aba Daba Honeymoon" fame), a very young Anne Francis, Murray Hamilton, James Westerfield, and Anne Seymour, who played Broderick Crawford's wife a couple of years before in All the King's Men, all contribute fine work.

Sadly, The Whistle at Eaton Falls would turn out to be Siodmak's penultimate Hollywood film. (He would return to his native Germany after suffering through Burt Lancaster's egomania during the shooting of The Crimson Pirate the following year.) Though it doesn't wield the power or flaunt the arresting style of his noir movies, The Whistle at Eaton Falls is a well-made film that tackles an important topic in a matter-of-fact manner. It also would pave the way for such future labor/union classics as On the Waterfront  (on which Siodmak collaborated with producer Budd Schulberg during its early stages), Norma Rae, and Silkwood. If you're a fan of those important pictures, you'll like The Whistle at Eaton Falls, too.

Vital Disc Stats: The Blu-ray
The Whistle at Eaton Falls arrives on Blu-ray as part of Flicker Alley's new Flicker Fusion series that, according to a company press release, "brings new projects, lesser-known rarities, and archival restorations to light." This is a "MOD Edition" Blu-ray disc, and it seems as if future releases in the Flicker fusion line will be in that format, too. Inside the standard, clear-case packaging, there's a six-page, fold-out booklet that contains an excerpt from author Richard Koszarski's book Keep 'Em in the East: Kazan, Kubrick and the Post-War New York Film Renaissance, a couple of black-and-white scene stills, and transfer notes. Video codec is 1080p/AVC MPEG-4 and audio is DTS-HD Master Audio 2.0 mono. Once the disc is inserted into the player, the static menu without music immediately pops up; no previews or promos precede it.

It's a small miracle we're able to see The Whistle at Eaton Falls at all, let alone in such splendor, due to the paucity of prints that were available when Tom H. March and David Strohmaier began their voluntary restorative work. The liner notes state, "The elements used [for this 2K restoration] were the original nitrate negative where possible and a positive print made several years ago at the Library of Congress (LOC) restoration facility in Culpeper, Virginia. These two 35mm elements were equally problematic due to many blotches, scratches and other anomalies that relate to aging film stock. The bulk of the materials came from the  LOC positive print which had a steadier image overall, however, about 20% was needed from the nitrate negative with some major registration steadying applied. Every effort was made to blend these two elements together to make the best possible final product. In four cases, frame interpolation was used to patch major rips in the image. An original optical soundtrack was used and re-synced to the new restored master. As far as we could tell, based on these three element sources, the film is totally complete to the 1951 original release by Columbia Pictures." Watch a sample of the restoration handiwork below.

The 1080p/AVC MPEG-4 transfer is indeed impressive, and though it's evident when different sources were used (the original nitrate negative is noticeably sharper and exhibits less grain), Strohmaier and March succeed in presenting a seamless whole that's distinguished by excellent clarity and contrast. The rendering faithfully honors the cinematography of Joseph Brun, who would earn an Academy Award nomination for Martin Luther three years later, and features rich blacks, stable whites, and nicely varied grays that heighten detail and depth levels. Location films from this period often flaunt a grittier appearance, but the grain structure here looks natural, is largely unobtrusive, and lends the image a lovely film-like feel. Superior shadow delineation keeps crush at bay, costume textures and patterns are well defined, and sharp close-ups showcase fine facial features well. Some faint print damage remains, but you really have to look for it, and considering the shoddy condition of the original sources, it's unrealistic to expect a spotless remaster.

Seeing a forgotten, almost-lost film like The Whistle at Eaton Falls in such fantastic condition is quite a thrill, and Strohmaier, March, and the folks at Flicker Alley all deserve kudos for their commitment to the restoration project.

The newly restored DTS-HD Master Audio 2.0 mono track supplies clear, well-modulated sound. According to the liner notes, "An original optical soundtrack was used and re-synced to the new restored master." The sound is crisp and clean, with no age-related hiss, pops, or crackle intruding. Sonic accents like the titular steam whistle, rumbling car engines, and factory noises are distinct, excellent fidelity helps the music score fill the room, and all the dialogue is easy to comprehend. A couple of boisterous crowd scenes toward the end of the film perk up the track, but this is largely a subdued audio presentation that accurately reflects the serenity of small-town life.

A fine example of semi-documentary filmmaking, The Whistle at Eaton Falls gracefully chronicles the conflict between labor and management at a rural New England plastics plant, but its thin narrative struggles to sustain the picture. Flicker Alley beautifully restores this lost classic, providing an impressive 2K transfer, remastered audio, and a hefty supplemental package, all of which enhance the movie's appeal. Despite its slow pacing and one-note plot, The Whistle at Eaton Falls merits attention, especially from classic film aficionados, and is definitely worth a look.