Karen Silkwood (Streep) lives a free-spirited existence with two friends (Kurt Russell and Cher) who work with her at an Oklahoma nuclear facility. It's only when she discovers she's been exposed to radiation that Karen's conscience awakens, and soon she is digging for evidence of wrongdoing at her company. But her sudden zeal for safer working conditions may come at a high price as she alienates friends...and possibly even puts her own life in peril.

Look up a list of famous whistleblowers, and it's a sure bet Karen Silkwood’s name will be on it. A technician who helped manufacture radioactive plutonium pellets at the Kerr-McGee chemical plant near Oklahoma City in the early 1970s, Silkwood became a dedicated union activist determined to expose dangerous health and safety practices and corrupt activity at the facility. Management labeled her a lightning rod, so when Karen tested positive for plutonium contamination three separate times over a three-day period in late 1974, she suspected foul play. About a week later, while on her way to meet a New York Times reporter and national union official about evidence she collected against Kerr-McGee, she was killed in a single-car accident.

The mysterious and controversial circumstances surrounding Silkwood's crash sparked an extensive investigation, but to this day the results remain inconclusive. Was she run off the road by nefarious Kerr-McGee operatives who sought to permanently silence her, or did she simply fall asleep at the wheel? (Elevated levels of sedatives were found in her system.) The former scenario seems more likely, and it's certainly the one director Mike Nichols propounds in Silkwood, a thoughtful, probing character study that paints a reverential portrait of Karen, yet doesn't sugarcoat her abrasive personality or ignore her faults.

Karen, as portrayed so beautifully by Meryl Streep, doesn't set out to be a heroine, but her inquisitive nature, fearless attitude, and genuine concern for others inspire her to speak out against a company trying to take advantage of its dependent workforce. In the small Oklahoma community of Crescent, Kerr-McGee is the only game in town, and while Karen's colleagues often appreciate her efforts on their behalf, they begin to cool toward her when her ceaseless pursuit of company violations threatens to shut down the plant and render them unemployed. To these struggling workers, a steady job is more important than what they perceive to be some vague health risk.

Yet Karen forges ahead undeterred. Like them, she lives a dull, paycheck-to-paycheck existence. She shares a ramshackle house with her boyfriend Drew (Kurt Russell) and best friend Dolly (Cher), both of whom also work at Kerr-McGee, but don't share - or even understand - her activism. On the rare occasions when she gets a weekend off, she visits her three kids, who live in Texas with her sullen ex-husband and his subservient girlfriend.

One of the film’s strongest aspects is its depiction of the dreary factory and rural culture that consumes the characters - the boring, repetitive jobs, lengthy shifts, and less-than-ideal working and domestic conditions. Yet amid the drudgery, a familial camaraderie develops that brightens the interminable days. Nichols, with his keen eye and acute perception, immerses us in this world, and the film’s deliberate pacing aptly reflects it, giving screenwriters Nora Ephron and Alice Arlen ample time to thoughtfully explore the subtle dynamics of Karen’s various relationships and develop the finer points of all the people who circulate in her orbit. Underlying tension is always evident, but ramps up nicely as Karen becomes an agent for change and begins risking her livelihood - and her life - to protect her colleagues and bring down a company that often dismisses their health and safety.

Though Nichols always coaxed finely tuned performances from his actors, he worked especially well with Streep, with whom he forged a symbiotic partnership that over the ensuing two decades produced three more films (Heartburn, Postcards from the Edge, and the TV adaptation of Angels in America). Always versatile and fascinating to watch (yet often criticized for being cool, aloof, and too controlled), Streep - fresh from her Oscar-winning tour de force in Sophie’s Choice - switches gears and files a free-wheeling, brash, and utterly natural portrayal that’s both liberating and admirable.

Of course, Streep was used to rigorous dramatic workouts, but before Silkwood, the same could not be said of Kurt Russell and Cher. The limits of their talents had not yet been tested, but Nichols took a chance on both of them, and the sensitive, nuanced work he helped them produce instantly altered the trajectories of their respective careers. As a no-glamour lesbian who enters into an affair with a perky blonde mortician (Diana Scarwid), Cher especially impresses, mixing comedy with pathos and earning a well-deserved Best Supporting Actress Academy Award nomination. (Streep, Nichols, Ephron and Arlen, and the film's editing also received Oscar nods.)

And speaking of supporting actors, how about this line-up of top-flight performers - Craig T. Nelson, Fred Ward, Ron Silver, Josef Sommer, Bruce McGill, David Strathairn, M. Emmet Walsh, Tess Harper, and James Rebhorn - all of whom contribute excellent work. The ensemble nature of Silkwood enhances the authenticity of an already potent tale, and Nichols' perceptive, understated presentation heightens its impact. With quiet grace, this textured, thought-provoking film shows us how powerful one voice can be by saluting an average woman who was brave enough to speak the truth and fight for what’s right, no matter the cost. 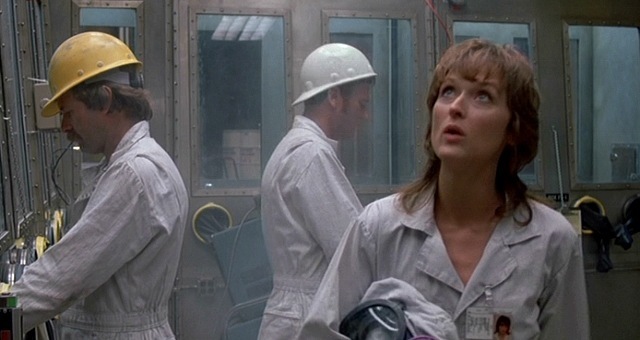 Silkwood arrives on Blu-ray packaged in a standard case with reversible cover art. Video codec is 1080p/AVC MPEG-4 and audio is DTS-HD Master Audio 2.0. Once the disc is inserted into the player, the static menu with music immediately pops up; no previews or promos precede it.

The 1080p/AVC MPEG-4 transfer from Kino runs the gamut from very good to pretty awful, and that's a shame because Silkwood features some lovely cinematography by Miroslav Ondricek. Any scene that's remotely dark devolves into a grainy mess, as buzzing pixels, severe softness, and a reddish tint cloud the image. Brighter sequences look markedly better, but it's apparent little, if any, restorative work has been performed on the source material, which exhibits sporadic damage, including a few jarring white blotches. During its better moments, the transfer produces a fluid film-like appearance, and despite the drab yet realistic color palette, some bursts of vibrant hues occasionally perk up the picture. Black levels are deep enough (although crush is apparent at times), the white uniforms of the technicians are crisp and clean, and flesh tones are generally true and consistent throughout. Close-ups are a little soft, yet still show off fine facial features well, and background elements are generally easy to discern. It's always disappointing when an acclaimed film doesn't get the technical treatment it deserves, and Silkwood is the latest catalog title to suffer this unfortunate fate.

The DTS-HD Master Audio 2.0 track lacks distinction, but does its job well. The Silkwood soundscape isn't very active, but the humming noises of the plant, screeching car wheels, slamming doors, and radiation alarms and sirens are all well rendered. Subtle atmospherics come through clearly, especially outside on Karen's back porch, and a wide dynamic scale embraces the gentle strains of Georges Delerue's country-tinged music score. All the dialogue is easy to comprehend, and no age-related hiss, pops, or crackles disrupt the quiet drama. Silkwood is a nuanced film, and this fine track nicely honors it.

All the supplements are Blu-ray exclusives (see below).

Karen Silkwood was a controversial figure, but Mike Nichols' thoughtful, intimate, and dimensional portrait of her celebrates not only her combative spirit, but also those average Joes and Janes who muster the courage to stand up to and fight the establishment to affect necessary change. Meryl Streep marvelously embodies Silkwood, crafting an honest, human portrayal, and Kurt Russell, Cher, and a sterling cast of first-class actors admirably support her. Sadly, a shoddy video transfer dulls enthusiasm for this Blu-ray edition, which doesn't give this excellent film the respect it deserves. As a result, this release of SIlkwood is strictly for fans only, and very forgiving ones at that.