A young, traumatized mute woman must face her fears and confront evil in a Gothic mansion one dark and stormy night in The Spiral Staircase, director Robert Siodmak's taut, involving, and underrated thriller that stars the always admirable Dorothy McGuire, George Brent, Ethel Barrymore, and a host of wonderful character actors. The story may be a bit trite, but the superior production values and excellent direction and performances - not to mention the brand new restored print (struck from a 4K scan) and atmospheric audio - elevate this impressive presentation. Recommended.

Arguably the most famous movie about a mute woman from Hollywood’s Golden Age is the touching drama Johnny Belinda, which won Jane Wyman a well-deserved Best Actress Oscar. Yet The Spiral Staircase, an atmospheric chiller made a few years earlier by director Robert Siodmak, rates a close second. As a traumatized young woman who can’t speak and must outwit a crazed serial killer in a Gothic mansion, the luminous Dorothy McGuire makes a strong impression, while Siodmak’s firm command of the creepy material helps him spin a taut, riveting yarn that many regard as a blueprint for the modern slasher film.

In turn-of-the-century New England, a ruthless killer who stalks and preys upon young disabled women awakens a sleepy, rural town. Helen (McGuire), who lost the power to speak years earlier after watching her parents die in a horrific house fire, works as a nurse’s aid for the elderly, bedridden Mrs. Warren (Ethel Barrymore), a crusty yet warm-hearted dowager who fears Helen may be a prime target for the murderer and worries about her safety. Mrs. Warren doesn't hide her disdain for her dashing, playboy son, Steven (Gordon Oliver), and mild-mannered, erudite stepson, Albert (George Brent), and can't abide their intense sibling rivalry. Both men live with her, as do Mrs. Warren’s comely secretary, Blanche (Rhonda Fleming), with whom Steven dailies, her down-to-earth servants (Elsa Lanchester and Rhys Williams), and persnickety nurse (Sara Allgood), all of whom will also figure prominently in the events that transpire within the stately home’s imposing walls one dark and stormy night.

Will Helen be the next victim? How can she defend herself or seek help if she can’t speak, let alone scream? And will the kindly Dr. Parry (Kent Smith), who tends to Mrs. Warren and has an obvious crush on Helen, be able to come to her aid if she needs him?

Though Hollywood censorship put the kibosh on graphic depictions of violence in 1945, Siodmak gets around the constraints by artfully depicting the murders. An extreme close-up on the killer’s eye, shadowy photography, and a subjective camera (see photos below), among other tricks, allow him to build considerable suspense. Hitchcock would take it all a step further in Psycho 15 years later, but Siodmak lays the groundwork here, while the tightly knit script by Mel Dinelli, who specialized in claustrophobic film noirs, introduces many elements that would become horror movie clichés a generation later. The Spiral Staircase may seem a bit trite and predictable today, but we must remember this still highly effective thriller paved the way for such iconic slasher flicks as Halloween, Friday the 13th, and When a Stranger Calls, all of which take a few leaves from its book.

Tightly constructed, inventively shot, and well acted by a first-rate cast, The Spiral Staircase, like many films of the period, explores the troubling effects of psychological trauma and parental neglect, and though its explanations may seem simplistic, they nevertheless ring true. Yet it’s the cinematic trimmings, care of cinematographer Nicholas Musuraca (Out of the Past) and a host of accomplished craftsmen, that make the film so fascinating. Style is at least as important as substance, and Siodmak maximizes the impact of his camera, set, and compositions to create an often dazzling mise-en-scène.

McGuire balances vulnerability and strength with aplomb. Though it would be easy to overdo facial reactions because of her character’s inability to speak, McGuire remains wisely restrained throughout, yet still transmits a wealth of heightened emotion. She’s the movie’s undeniable focus, but a troupe of exceptional character actors, led by the always magnetic Ethel Barrymore (who received the film’s sole Academy Award nomination for her portrayal), delightfully eccentric Elsa Lanchester, and sourpuss Sara Allgood, lend the proceedings significant flavor. The beautiful, 22-year-old Rhonda Fleming also can’t help but snag attention in a brief yet pivotal role.

The men are more bland, but in a way, that’s fitting in this instance. Their low-key nature keeps the killer’s identity in doubt and fuels the aura of unease surrounding all the women, most of whom rise above their respective frailties and brandish considerable strength.

Clocking in at 83 minutes, The Spiral Staircase makes the most of every moment, zipping along at a brisk clip and punctuated by a few welcome instances of comic relief. With a keen eye, Siodmak crafts an irresistible exercise in suspense that remains both impressive and entertaining more than 70 years later. Any thriller worth its salt owes it a great debt. 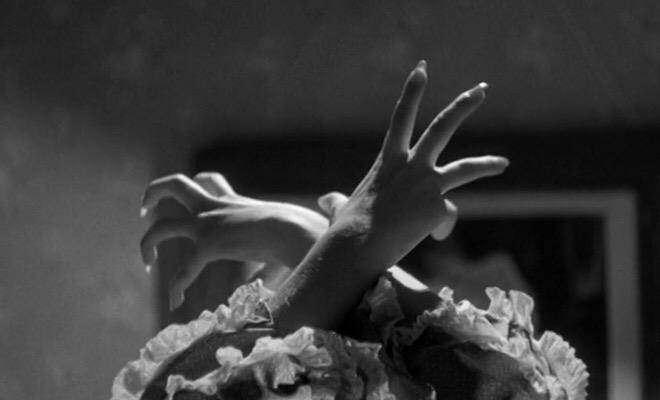 The Spiral Staircase arrives on Blu-ray packaged in a standard case. Video codec is 1080p/AVC MPEG-4 and audio DTS-HD Master Audio 1.0. Once the disc is inserted in the player, the static menu with music immediately pops up; no previews or promos precede it.

The packaging proclaims The Spiral Staircase has been "newly remastered in HD from a 4K scan of the restored fine-grain master," and the results are quite stunning. Though some random speckles remain and a stray thread curls into the picture on the right side of the screen for a minute or two toward the end of the movie, this is without a doubt the best this classic thriller has ever looked on home video. Grain is noticeable, but never overpowering, blending in well with the film's fabric and enhancing the story's Gothic flavor. Black levels are appropriately rich, yet crush is rarely an issue, and a nicely varied gray scale brings all the details in the ornate mansion, from the elaborately patterned wallpaper to the decorative rugs. Mirror reflections are crystal clear, background elements are easy to discern, and the extreme close-ups that director Robert Siodmak often employs - especially the ultra-creepy ones that zoom deep into the killer's eye - are breathtakingly sharp. The creative photographic effects seamlessly integrate into the whole, and though a few stretches look a bit rougher than others, the overall presentation is very impressive indeed. Fans of this under-appreciated mystery should be thrilled with the care Kino has taken with this release.

Sound is always an important aspect of any thriller, and the DTS-HD Master Audio 1.0 track maximizes the impact of all the audio effects. The Spiral Staircase features one of the longest thunderstorms in film history (it lasts for almost the entire movie!), but the wide dynamic scale handles all the rumbles - as well as several piercing screams - without a hint of distortion. Nuances come through nicely, too, and Roy Webb's eerie music score complements the action without calling too much attention to itself. All the dialogue is clear and easy to comprehend, any age-related defects, like hiss, pops, and crackles, have been scrubbed away. For a 73-year-old film, The Spiral Staircase sounds darn good and beautifully heightens the suspenseful atmosphere.

Just a couple of supplements round out the disc.

Taut, involving, atmospheric, creatively directed, and featuring a knockout performance by the always impressive Dorothy McGuire, The Spiral Staircase stands as one of Hollywood's most underrated classic thrillers. The story of a shy, traumatized mute woman who must confront evil in a Gothic mansion one dark and stormy night brims with tension and features a dynamite supporting cast that elevates the rather predictable - yet still entertaining - tale. Kino's Blu-ray presentation features a good-looking restored print that's been newly remastered from a 4K scan, effective lossless audio, and a couple of engaging supplements. Kino has been releasing some top-notch classic titles of late, and The Spiral Staircase fits nicely into that mix. Recommended.

Sale Price 16.23
List Price 29.95
Buy Now
3rd Party 16.23
In Stock.
See what people are saying about this story or others
See Comments in Forum
Previous Next
Pre-Orders
Tomorrow's latest releases