Cyd Charisse may be the titular character, but Robert Taylor gets top billing in Party Girl, a glossy gangster yarn directed by Nicholas Ray. John Ireland and Lee J. Cobb also star in this entertaining saga of a crooked lawyer and shady "showgirl" who try to extricate themselves from a tangled and dangerous mob web. A glorious transfer struck from a 4K scan of preservation elements revitalizes this slick Metrocolor noir that deserves to be rediscovered. Recommended.

As the studio system began to crumble in the late 1950s, so did some of the careers it meticulously built. Take Robert Taylor. The 25-year MGM veteran still drew crowds, but Party Girl, director Nicholas Ray's tough, sexy homage to 1930s gangland Chicago, would mark his final film appearance as a studio contract player. Ditto Cyd Charisse, who headlined some of Hollywood's greatest musicals alongside Fred Astaire and Gene Kelly, but by 1958 the genre had run out of gas, so after Party Girl, MGM set Charisse adrift.

Their departure was a shame, but before anyone sheds too many tears, it's important to note the last MGM hurrah for Taylor and Charisse was just that. Party Girl made megabucks at the box office, and though it hasn't enjoyed the staying power of Taylor's historical epics and Charisse's musicals over the ensuing decades, Ray's film delivers the goods with plenty of panache. CinemaScope and Metrocolor slather on the de rigueur MGM gloss, but Ray supplies welcome grit that gives this crime yarn an essential hard edge. 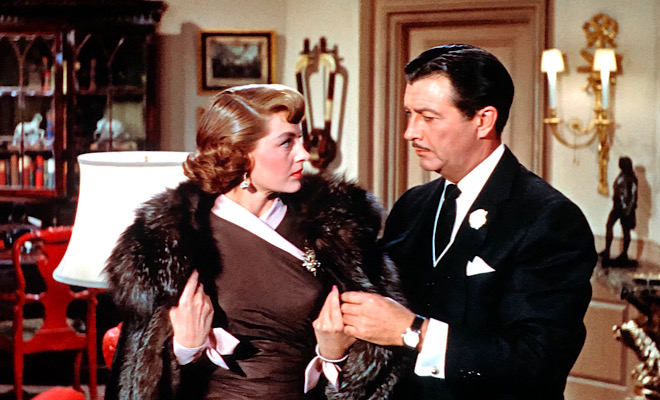 Party Girl takes place in the Windy City in "the early 1930s" and chronicles the unlikely - and dangerous - liaison between Vicki Gaye (Charisse), a nightclub showgirl (hooker?) who gets paid to flirt with gangsters at after-hours parties, and Tommy Farrell (Taylor), the crooked attorney and "mouthpiece" for the crime syndicate run by Rico Angelo (Lee J. Cobb), a mob boss obviously modeled after Al Capone. Both the cynical Vicki and hardened Tommy, who walks with the aid of a cane after a childhood accident mangled his hip, crave warmth, comfort, and self-respect. Tommy especially feels broken, but the healing power of Vicki's love finally gives him the strength to try and break free of Rico's strangulating grasp.

Rico, though, like a spurned lover, refuses to let go and threatens to harm Vicki if Tommy bolts. Meanwhile, the Chicago district attorney (Kent Smith) begins cracking down on organized crime and enlists Tommy as bait to nab the elusive and ever more unhinged Rico. 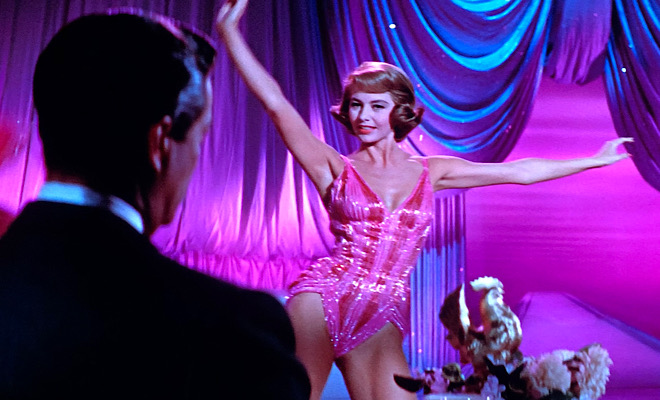 Party Girl deftly evokes the atmosphere of Prohibition Chicago, from its speakeasies and Tommy-gunfire to the stiff breezes coming off Lake Michigan. A gaudy color palette enhances the air of depravity swirling about the film, which exudes a sense of nostalgia for both a bygone era of flagrant lawlessness and the hard-boiled movies that depicted it. Though at times Ray's direction feels formulaic and the mechanically choreographed climax lacks visceral impact, there's enough inventiveness and drama on display to maintain interest throughout. The pacing drags a bit during the second half, but the screenplay by George Wells, who won an Oscar the previous year for the romantic comedy Designing Woman, puts a modern twist on the gangster blueprint, keeping the characters real without diminishing their larger-than-life personalities.

If the scene where Rico honors and forgives a disloyal mob member before violently attacking him looks familiar, it's because a variation of it also turns up in The Untouchables almost three decades later. Director Brian De Palma's depiction may be far more graphic, but Ray makes us squirm, too. Party Girl, despite its MGM pedigree and innocuous title, doesn't shy away from painting a blistering portrait of organized crime, and though Cobb occasionally chews the scenery in addition to his omnipresent cigar (what actor playing Capone or a Capone clone hasn't?), his snarling, bombastic performance is riveting. (My favorite moment of his occurs early in the film when Rico, despondent over the news that Jean Harlow has just gotten married, repeatedly fires his gun at a framed publicity still of the star at close range.) 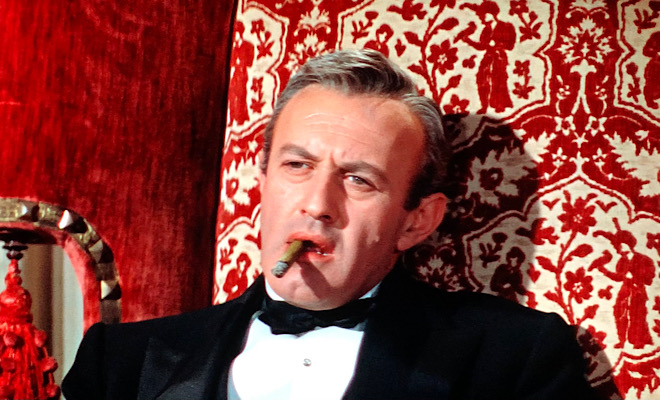 Taylor brings plenty of square-jawed toughness to the brooding Tommy and files a no-nonsense, understated portrayal. Once the epitome of a prettyboy movie star (critics joked he looked more beautiful than Garbo when he romanced her in Camille 22 years earlier), Taylor became more chiseled and weathered as he aged (possibly due to his three-pack-a-day cigarette habit that contributed to his early death from lung cancer at age 57 in 1969) and the look suits his character. He also embraces Tommy's infirmity, adopting what appears to be an authentic gait for someone afflicted with a dysfunctional hip.

As much as I adore watching Charisse dance (I believe she's the finest partner both Astaire and Kelly ever had), her acting always leaves a lot to be desired. Her cool, aloof demeanor fits Vicki like a glove and she's a vision in the form-fitting gowns designed by Helen Rose, but Charisse's limited emotional gamut prevents us from properly connecting with her. She's better than usual in Party Girl (but not as good as she is in what I consider her finest film, Silk Stockings) and exudes a heaping helping of allure, but can't compete with the iconic femme fatales of film noir. Her two sexy dances sizzle, but their contemporary stylings go against the movie's period grain. Though Charlestons would have been more appropriate, MGM mandated the modern choreography that evokes Las Vegas instead of Depression-era Chicago to ensure 1950s audiences could relate to it. Here's the first - and best - of the dances:

Party Girl, which also contains an electric performance by John Ireland as one of Rico's henchmen, can't stand alongside the great Warner gangster sagas of yore, but remains an intriguing specimen that holds up well. Though it's not one of Ray's best films - MGM reportedly didn't grant him the artistic freedom he expected and previously enjoyed - it benefits immensely from his keen eye and insights. A strong cast also bolsters this slick mob drama that bids a fond farewell to the kind of moviemaking we'll never see again. 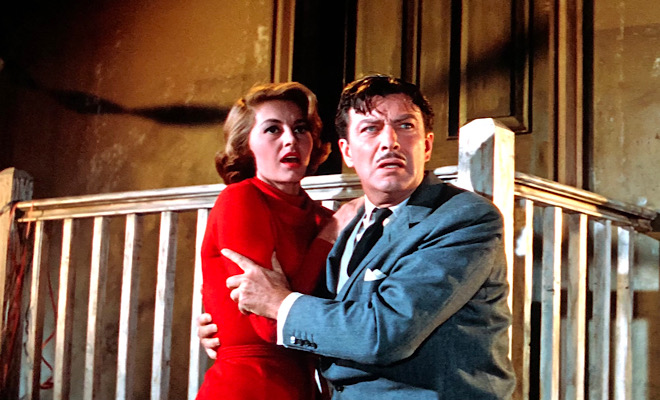 Vital Disc Stats: The Blu-ray
Party Girl arrives on Blu-ray packaged in a standard case. Video codec is 1080p/AVC MPEG-4 and audio is DTS-HD Master Audio 2.0 mono. Once the disc is inserted into the player, the static menu without music immediately pops up; no previews or promos precede it.

A new HD master struck from a 4K scan of preservation elements yields a glorious 1080p/AVC MPEG-4 transfer that just might make you fall in love with Metrocolor. Prone to fading over time, the single-strip format often looks pale and flat, but when beautifully restored from original elements it can rival its three-strip cousin. Excellent clarity, spot-on contrast, and just enough grain to preserve the film-like feel combine to produce a vibrant image that faithfully renders the lush CinemaScope cinematography of Robert Bronner, who also photographed Charisse in It's Always Fair Weather, Meet Me in Las Vegas, and Silk Stockings. Reds predominate and they burst with arresting boldness, but softer shades like pink and lavender are beautifully rendered, too. 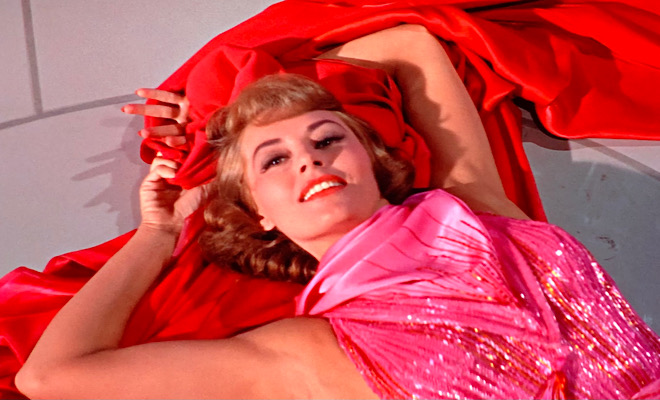 Jewelry sparkles, upholstery and gowns exhibit plenty of texture, and sharp close-ups showcase facial wrinkles and hair follicles. The picture is so well defined, you can even see droplets of water on Charisse's cheeks and nose after she rubs a bouquet of roses against her face. Deep blacks, bright, stable whites, and terrific shadow delineation also please the eye and no nicks, marks, or errant scratches dot the pristine source material. Without a doubt, Party Girl has never looked better on home video, and that's cause for celebration.

Party Girl was originally recorded and presented theatrically in four-track stereo, but the Blu-ray only gives us a (very good) DTS-HD Master Audio 2.0 mono track. The robust, well-balanced sound makes us rue the absence of a multi-channel track, but as Spencer Tracy so memorably opined in 1952's Pat and Mike, "what's there is cherce." A wide dynamic scale handles all the brassy highs and weighty lows of the music score, as well as Tony Martin's vocals on the title tune, with ease, and all the dialogue is clear and easy to comprehend. Sonic accents like the rat-a-tat-tats of tommy guns are crisp and subtleties like the sizzle of acid on crepe paper are distinct. No age-related hiss, pops, or crackle intrude and no distortion creeps into this potent track.

The only disc extra is the movie's three-minute original theatrical trailer that allows all the major characters the opportunity to personally introduce themselves to the audience.

Party Girl will never be regarded as one of Hollywood's great gangster films, but it stands as a well-made, entertaining genre entry that proves MGM gloss and gritty crime dramas aren't mutually exclusive. An aging Robert Taylor and post-musical Cyd Charisse make a surprisingly dynamic duo in this tale of a mob mouthpiece and slinky showgirl who seek to escape their sordid pasts and dangerous present. A strong Warner Archive transfer struck from a 4K scan of preservation elements enhances the appeal of this slick vehicle directed by the always interesting Nicholas Ray. Recommended.