You'd think chilled borscht pulses in her veins. She's Ninotchka Yoshenka, a lovely yet severe Soviet envoy sent to Paris to rescue wayward comrades from the perils of champagne and capitalism. But there may be a thaw in Ninotchka's Cold War. She meets Steve Canfield, a smoothly brash American who won't take "nyet" for an answer.

Fred Astaire and Cyd Charisse recapture the magic of their The Band wagon pairing in this musical based on the same-titled 1955 Broadway hit and on the famed 1939 Greta Garbo comedy Ninotchka. Set to witty Cole Porter tunes, spiked with laughs and featuring the two leads dancing the Eugene Loring-Hermes Pan choreography into timeless emotion, Silk Stockings shows why elegance and fun never go out of style.

Adapting popular films into Broadway musicals is a common practice these days, but it was a rarity 60 years ago when the legendary Cole Porter helped transform Ernst Lubitsch's classic comedy 'Ninotchka' into 'Silk Stockings.' The tale of a dour, rigid female Soviet commissar who's seduced and softened by the pleasures of Paris, freedom of capitalism, and charms of a European count captivated audiences back in 1939 and provided Greta Garbo with an iconic comic role. (The film's advertising campaign famously proclaimed, "Garbo Laughs!") The musical adaptation, which would prove to be Porter's theatrical swan song, ran for almost 500 performances on Broadway, but the delightfully effervescent 1957 film version starring Fred Astaire and Cyd Charisse would quickly eclipse it. Packed with exhilarating numbers and oozing panache, this sophisticated yet accessible musical comedy incisively satirizes not only the severity of Soviet society, but also the innate shallowness and crudity of Hollywood.

The fun begins when cocky movie producer Steve Canfield (Astaire) arrives in Paris to mount an opulent musical adaptation of Tolstoy's 'War and Peace' starring - apologies to Esther Williams - swimming sensation Peggy Dayton (Janis Paige). The score will be adapted from music by Peter Boroff (Wim Sonneveld), a classical Russian composer whose best known work is the somber propaganda piece 'Ode to a Tractor.' The Soviet government, however, can't abide what they perceive to be the vulgarization of Boroff's music, so the Soviet Commissar of Arts (George Tobias) dispatches a trio of envoys (Peter Lorre, Jules Munshin, and Joseph Buloff) to Paris to protect Russia's reputation and bring Boroff home.

Steve slyly diffuses the tension and tames the diplomats by plying them with champagne, women, and high living, which inspires even more outrage from Moscow and forces the deployment of secret weapon Nina Yoshenko (Charisse), a robotic, perfectly programmed Communist agent who's tasked with cleaning up the mess and shaping up her wayward comrades. Nina and Steve instantly lock horns, but the suave producer soon cracks his icy adversary's shell, and after a whirlwind tour of Paris, she too succumbs to the allure of freedom…and Steve. But is Steve's commitment to his big-budget capitalistic picture greater than his burgeoning love for the shy, beautiful Communist whom he's nicknamed Ninotchka? Politics and pride always spell trouble for relationships, but toss in a cold war and they become particularly combustible.

Produced by Arthur Freed, MGM's legendary musical maestro, 'Silk Stockings' stands as one of the studio's last great Golden Age musicals, but it never quite receives the attention it deserves. Overshadowed by other 1950s classics like 'Singin' in the Rain,' 'An American in Paris,' 'The Band Wagon,' and 'Gigi,' 'Silk Stockings' nevertheless scores high marks in every creative department. Porter's lilting melodies and witty lyrics strike just the right tone, and the elegant direction of Rouben Mamoulian showcases every stylish element, from the perfectly appointed sets and costumes to each beautifully choreographed dance sequence. Though the script lifts many scenes almost verbatim from 'Ninotchka,' it alters and updates the story just enough to lend it freshness and topicality.

As the Cold War tightened its grip on America in the mid-1950s, 'Silk Stockings' seemed even more relevant (and bitingly comic) than 'Ninotchka' did on the eve of World War II. Americans were more aware of Russia's political climate and more familiar with Communist propaganda, which made the Soviet send-ups more pungent for contemporary audiences. And with his usual acerbic flair, Porter pounces on Soviet idiosyncrasies, deliciously delineating the differences between capitalism and communism in 'Paris Loves Lovers.' He also skewers the austerity of Russia's totalitarian regime with unabashed glee in the film's most clever number, 'Siberia,' in which the three disgraced commissars lament their possible exile to the region's ice-cold penal colonies. Hollywood absorbs a few jabs as well when Steve and Peggy voice their frustrations over the endless string of technological gimmicks movie studios must implement to entice audiences into theaters in the razor sharp 'Stereophonic Sound.'

Porter's top-notch songs elevate the film's appeal, but it's the dancing that really makes 'Silk Stockings' soar. (Mamoulian once said "I had two of the best dancers in the world, and what interested me was to give greater importance to the dancing than to the action proper...The psychological and dramatic development existed only in the dances.") At 57, Astaire felt he was too old to believably portray a dashing leading man, but he still floats on air in the dance sequences, and his pairing with the graceful and gorgeous Charisse, with whom he was teamed so memorably in 'The Band Wagon' four years earlier, is pure bliss. In 'All of You,' their elegant, understated moves exquisitely complement Porter's romantic melody, but the more energetic and athletic trio of dances that spring from the sprightly 'Fated to Be Mated' (one of two new songs Porter composed for the picture) showcases the Astaire-Charisse chemistry and stands as the movie's undisputed terpsichorean highlight.

Two solo numbers from Charisse also dazzle. The simply staged yet unabashedly sexy 'Silk Stockings' ballet chronicles Nina's transformation from plain Jane to Parisian style icon, while the rousing, muscular 'Red Blues' salutes the indomitable independent spirit of downtrodden Russians. Not to be outdone, Astaire also enjoys a star turn, donning top hat and tails for what would be the final time in 'The Ritz Roll and Rock,' a snazzy and jazzy rock-'n'-roll ditty that the legendary dancer specifically commissioned from Porter. Astaire always sought to stay current and relevant, and he brings plenty of old-man cool to his last MGM production number. When he smashes his top hat at the song's conclusion, it marks the end of an era that sadly will never return.

Acting was never Charisse's strong suit, but she's at her best here, affecting a decent Russian accent and nicely conveying the inner turmoil that afflicts Ninotchka, who is torn between her love of country and a man who represents all she's been groomed to reject. Janis Paige sparkles as the water-logged swimming star, and the three bumbling Russian envoys handle the comedy chores with aplomb. (Peter Lorre is especially amusing and adorable, and almost steals the show from Astaire and Charisse.)

'Silk Stockings' is an unqualified delight that seamlessly combines comedy, romance, songs, and especially dance. Astaire and Charisse make a magical team, and it's a shame they didn't collaborate more often. They were indeed "fated to be mated" on the dance floor, and every sublime lift, twirl, and leg kick drives the point home. More than anything else, 'Silk Stockings' celebrates their artistry, and it's a party well worth attending. 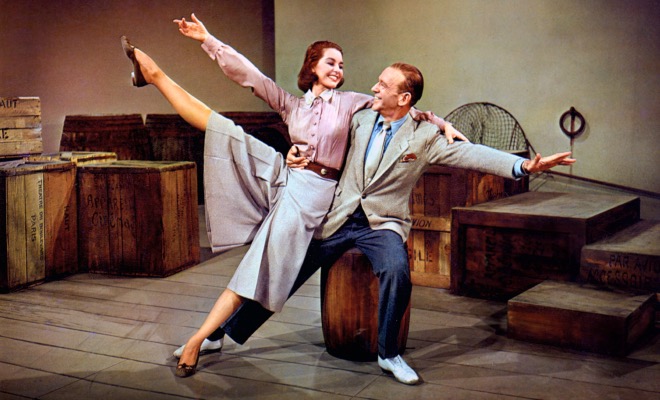 'Silk Stockings' arrives on Blu-ray packaged in a standard case. Video codec is 1080p/AVC MPEG-4 and audio is DTS-HD Master Audio 5.1. Once the disc is inserted into the player, the static menu with music immediately pops up; no previews or promos precede it. Instead of scene selections, the menu offers music selections, allowing viewers to jump directly to their favorite musical numbers.

'Silk Stockings' was shot using Metrocolor, one of many single-strip color stocks movie studios developed in the 1950s to cut costs. Prone to premature fading, single-strip color has proven problematic for many Golden Age classics over the years, but Warner Archive's 1080p/AVC MPEG-4 transfer looks surprisingly lively and lush. Though much of the palette is muted, all the hues seem true, and the garish outfits worn by Paige exude an eye-popping vibrancy that nicely punches up the picture. Flesh tones err a bit toward the rosy side, but strong, inky blacks and bright whites keep the image well balanced. Grain is visible, but never distracting, and no age-related nicks, marks, or scratches disrupt the presentation. Background elements are easy to discern, close-ups - especially those of Charisse - are wonderfully sharp and glamorous, and no banding, noise, or enhancements could be detected. Though certain stretches of 'Silk Stockings' look a little anemic, on the whole this is a pleasing transfer that serves the film well and should please its legion of fans.

The DTS-HD Master Audio 5.1 track greatly enhances one's enjoyment of this classic musical. Though the sound is consistently clear and crisp across the board, it really comes alive during the musical numbers. Astaire's silky vocals, Paige's belting, and the lush orchestrations of André Previn all fill the room with ease. Superior fidelity and subtle dimensional shadings heighten the multi-channel impact, and a wide dynamic scale embraces both screaming brass and weighty bass tones without a hint of distortion. The echoes during 'Stereophonic Sound' are highly effective, and the clattering of Nina's typewriter is appropriately bold and dissonant. All the dialogue is clear and easy to comprehend, and no age-related hiss, pops, or crackles muck up the mix. Musicals demand high quality sound, and this track really makes 'Silk Stockings' sing.

All the supplements from the previous DVD have been ported over to this Blu-ray release.

'Silk Stockings' is sparkling entertainment from start to finish. With first-rate Cole Porter tunes, clever lyrics, witty banter, and a plethora of breathtaking dance sequences, director Rouben Mamoulian's musical adaptation of 'Ninotchka' is as bubbly and fresh as a champagne cocktail. Fred Astaire and Cyd Charisse click like few other dance teams, and their work here brims with ethereal style and grace. Though not as dazzling as some releases, Warner Archive's Blu-ray presentation features stellar video and audio transfers and all the supplements from the previous DVD. If you're a musicals aficionado, 'Silk Stockings' is a must-buy, and even if you're not, this captivating film comes highly recommended.

Sale Price 17.99
Buy Now
3rd Party 13.6
In Stock.
See what people are saying about this story or others
See Comments in Forum
Previous Next
Pre-Orders
Tomorrow's latest releases