When Gene Kelly teams with Arthur Freed, Stanley Donen, Betty Comden and Adolph Green, the result is pure movie-musical alchemy: On the Town, Singin' in the Rain and It's Always Fair Weather.

Sparkling with wit and exuberant numbers, It's Always Fair Weather centers on the three World War II buddies (Kelly, Dan Dailey and Michael Kidd) who vow to reunite for old time's sake in 10 years. They do. And find their friendship has fizzled - until a day of tangling with romance, the fight game, the ad biz and a new medium called TV restores their bond. Highlights include the buddies' high-spirited romp that uses trash-can lids as dancing shoes, elegant Cyd Charisse's k.o. of a routine with broken-nosed pugilists, and Kelly's joyful, astonishing tap dance on roller skates. Wow!

When Dore Schary took over the reins at MGM in 1951, he began to systematically change the studio's focus. The musicals and heartwarming family pictures that so beguiled his predecessor, Louis B. Mayer, didn't interest the serious-minded Schary, who sought to mount more realistic and socially conscious dramas under the Metro flag. Schary was wise enough not to shun musicals altogether—after all, they were MGM's bread-and-butter for years—but he did severely curtail their production in favor of such "message" films as 'The Red Badge of Courage,' 'Bad Day at Black Rock,' and 'The Blackboard Jungle.'

Few, if any, musicals were weighty enough to satisfy Schary, but he must have been pleased with 'It's Always Fair Weather.' Substantive, cynical, and even slightly depressing, this Betty Comden-Adolph Green original enjoys many fine moments, but can't come close to recapturing the magic of the team's most famous efforts — 'On the Town,' 'Singin' in the Rain,' and 'The Band Wagon.' Exuberance and joy define those films, but such moments come at a premium in 'It's Always Fair Weather,' thanks to its darker, more sarcastic tone. And get this: Gene Kelly and Cyd Charisse star in the movie, but astoundingly never dance together on screen! Kelly tears it up with cohorts Dan Dailey and Michael Kidd, but doesn't even give Charisse a half-hearted twirl. That's not only inconceivable, it's unforgivable.

Time and television are the villains of the piece, and they seek to sabotage the relationship of three Army buddies who served together in World War II. After the jubilation of VE Day, the tight-knit trio agrees to meet again a decade later in the same neighborhood dive they frequented before the war. Ten years can be an eternity, and when Ted Riley (Kelly), Doug Hallerton (Dailey), and Angie Valentine (Kidd) reunite, they find they no longer have anything in common...and can't even bear to be around each other. Savvy TV exec Jackie Leighton (Charisse) gets wind of their situation and decides to exploit it on the weekly show of temperamental diva Madeline Bradville (Dolores Gray), an Oprah Winfrey-Kathie Lee Gifford hybrid whose 'Midnight With Madeline' specializes in weepy, inspirational reality TV (in between self-indulgent musical numbers). Patching up the friendship of three estranged servicemen is right up the show's alley, yet in television's best underhanded, cold-hearted tradition, it's all engineered as a surprise. To properly pull it off, a beleaguered Jackie must go to extreme lengths to keep the guys together and oblivious until air time. Of course, the deception becomes doubly dicey when she finds herself falling in love with Ted.

The reality TV angle fits snugly into today's culture, keeping 'It's Always Fair Weather' fresh and topical, but it can't salvage the movie's plodding story. Comden and Green are masters of satire, and they're at their best incisively skewering the plastic personalities and manipulative content that pervaded 1950s television, but they have trouble maintaining narrative flow. Although Dailey and Kidd are energetic and engaging, we don't develop an affinity with their characters, and the tepid romance between Kelly and Charisse seems mechanical. None of their sexual fireworks from 'Singin' in the Rain' or passionate longing from 'Brigadoon' find their way into this film, which strangely leaves us emotionally bereft.

Of course, the atmosphere perks up during the musical numbers, but hardly any of the catchy tunes relate to the plot. Three, however, are bona fide showstoppers, so we forgive them for bringing the sputtering story to a halt. 'The Binge Dance' begins as a bit of inebriated fun, but soon evolves into a rigorous display of athletic terpsichore that reaches its peak when Kelly, Dailey, and Kidd dance with metal trash can lids attached to their feet. 'I Like Myself,' the film's signature number, is an exhilarating showcase for Kelly, who croons the lilting André Previn melody on roller skates while gliding, tapping, spinning, and leaping along the sidewalks of New York. That tour de force is followed in short order by the dazzlingly inventive 'Thanks a Lot, but No Thanks,' in which an alluring Gray efficiently jettisons a band of dancing suitors with gunfire, dynamite, and trap doors. Blessed with a rich, powerful set of pipes, Gray (in an auspicious film debut) makes a big impression, but appeared in only three more pictures before abandoning Hollywood for the nightclub and Broadway stage.

The public's increasing indifference toward original film musicals undoubtedly hastened Gray's departure, and 'It's Always Fair Weather,' despite a valiant effort, did nothing to reverse the genre's downward trend. Still, from such an illustrious cast and crew, one expects more than the film delivers. 'It's Always Fair Weather' is often pleasant and occasionally inspired, but remains too stilted and self-conscious to be thoroughly captivating. And while I appreciate the effort and intentions of those involved, my feelings regarding the movie echo the lyrics sung by Gray: Thanks a lot, but no thanks. 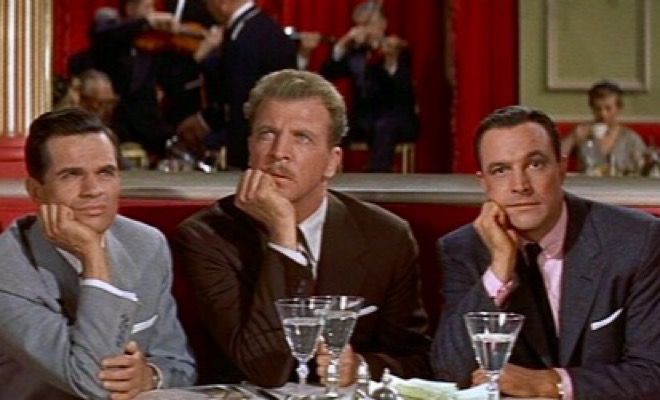 'It's Always Fair Weather' arrives on Blu-ray packaged in a standard case. Video codec is 1080p/AVC MPEG-4 and audio is DTS-HD Master Audio 5.1. Once the disc is inserted into the player, the static menu with music immediately pops up; no previews or promos precede it.

By 1955, three-strip Technicolor was a thing of the past, so 'It's Always Fair Weather' lacks the intense hues and crisp delineation of older MGM musicals, but Warner Archive has done a fine job restoring the film so it looks as vibrant and lush as possible. Any way you slice it, this 1080p/AVC MPEG-4 transfer is a big step up from the 2006 DVD. The image is brighter and bolder, grain is slightly reduced, and all the errant speckles that dotted the previous print are gone. Some issues, however, still remain. The horrific muddiness that overwhelms the picture during a couple of long-zoom effects shots looks as bad as ever, and the edge-of-frame distortion that plagued many early CinemaScope films is tough to ignore, too. The very wide 2.55:1 aspect ratio works for and against the film, on the one hand providing directors Kelly and Donen with more real estate to indulge in gimmicky process shots, but compromising background detail and depth levels on the other. Marvelous clarity and rich blacks invigorate the image, as do colorful accents like Charisse's emerald green outfit and Gray's red dress. Flesh tones remain stable and natural, and close-ups nicely render facial details. 'It's Always Fair Weather' will always be a problematic movie, but Warner's presentation masks the deficiencies well. If you're a fan of the film, an upgrade is definitely in order.

Warner Home Video remastered the film's original soundtrack to Dolby Digital 5.1 for it's 2006 DVD release, and that same track is given a lossless boost to DTS-HD Master Audio here. Enhanced fidelity and tonal depth are the most noticeable improvements, especially during the musical numbers. André Previn's lush and bouncy orchestrations burst with vitality (his score received the film's sole Oscar nomination) and Dolores Gray's mellifluous alto sounds gloriously rich and full. A wide dynamic scale handles all the blaring brass and weighty percussion without a hint of distortion, and solid mixing always puts the vocals front and center. Though surround activity is reserved for the songs, palpable stereo separation nicely complements the CinemaScope visuals, widening the soundscape and providing a more immersive experience. Sonic accents like the clatter of Kelly's roller skates and the clash of trash can lids are clear and distinct, and all the dialogue and lyrics are easy to comprehend. Best of all, no age-related imperfections like hiss, pops, or crackles intrude. This full-bodied track really punches up this somewhat anemic musical, and is a definite improvement over the previous DVD.

All the extras from the 2006 DVD have been ported over to this Blu-ray release, and musicals aficionados will appreciate all the rare and vintage material.

Though its title promises sunny skies, 'It's Always Fair Weather' is, at times, pretty gloomy. A sober, cynical story dims this musical's bright outlook, despite a handful of memorable numbers and some biting satire from Comden and Green. Warner Archive provides a stellar widescreen transfer and remastered audio, along with plenty of interesting supplements, but only the musical faithful will be inclined to purchase this promising but disappointing film.

Sale Price 17.99
Buy Now
3rd Party 17
In Stock.
See what people are saying about this story or others
See Comments in Forum
Previous Next
Pre-Orders
Tomorrow's latest releases