Pat is a top-notch athlete who crumbles whenever her fiancé watches her play. Mike is a slightly crooked sports agent/manager who tries to help her reach her potential. They make an unlikely couple and that's just what makes Pat and Mike one of the best Spencer Tracy-Katharine Hepburn romantic comedies. Breezy direction from the accomplished George Cukor, a clever script by Garson Kanin and Ruth Gordon, a sparkling supporting cast, and a host of cameos by real-life sports stars of the day add luster to this funny yet substantive romp that's been given a wonderful makeover by Warner Archive. A brand new 4K restoration from the original camera negative punches up this already punchy picture that's a showcase for its two iconic stars. Highly Recommended.

Have you ever seen a romantic comedy in which the two protagonists never even kiss? In Pat and Mike, Spencer Tracy doesn't give Katharine Hepburn so much as a tender peck on the cheek, let alone a big smackeroo at the fadeout. Such social distancing might kill the buzz of many rom-coms, but not director George Cukor's delightful study of a female athlete's bumpy relationship with her gruff, slightly shady manager. Who needs smooching when you've got a smart, amusing script by another legendary couple - Garson Kanin and Ruth Gordon - and magic galore from one of the most enduring and beloved teams in cinema history?

Tracy and Hepburn don't need to bill and coo to express their love. Such foolishness is beneath them. Theirs is a cerebral kind of love, a merging of their minds, hearts, and spirits. Trust, companionship, and warmth are the turn-ons in their kind of elevated relationship, and if sex is part of the equation, it happens off screen, behind closed doors, and probably in a pitch-black bedroom. Maybe because their iconic partnership began when she was 35 and he was 42, any groping and pawing seemed juvenile, but the Tracy-Hepburn mystique endures because their values - at least those projected on the silver screen - reflect those of any long-lasting union.

Romance, though, often plays second fiddle to sports in Pat and Mike, possibly the first movie to address - in a humorous manner - the crippling effects of performance anxiety on a world-class athlete. Pat Pemberton (Hepburn) is an accomplished golfer whose handicap is "a fella." Whenever her dashing yet overbearing fiancé Collier Weld (William Ching) watches her play, the pressure of his lofty expectations causes her to crumble. Her drives go awry, she can't make a putt, and his disgust over her failures chips away at her self-esteem. 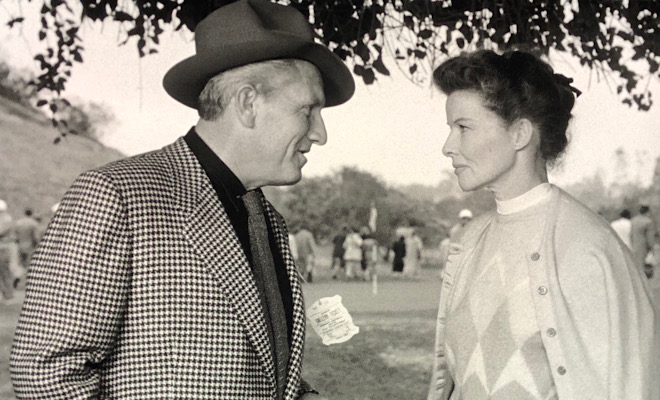 Pat loses a national golf tournament because Collier shows up for the final round, but she catches the eye of Mike Conovan (Tracy), a crusty, street-wise, chauvinistic manager who believes he can make more than a few bucks off of the "nicely packed" Pat. (As she walks away from him after their first meeting, he utters the immortal line, "There's not much meat on her, but what's there is cherce!") Mike has some mob ties and isn't averse to fixing some outcomes to sweeten the pot, but the fiercely honest, somewhat naive Pat signs up with him anyway, hoping he can help her vanquish her demons and realize her potential before she marries Collier. Mike is game, but doesn't realize she'll end up transforming him as much as he hopes to transform her.

Kanin and Gordon, who were close friends of Tracy and Hepburn, fashioned their script to suit Hepburn's natural athletic abilities. (The movie spends just as much time showcasing Hepburn's tennis skills as it does chronicling her exploits on the golf course.) They also incorporate bits of the pair's off-screen personalities into their respective characters to create possibly the best screen representation of the real Tracy-Hepburn relationship. (The two stars enjoyed a durable 25-year romance that lasted until Tracy's death in 1967, but never married because Tracy, a devout Catholic, refused to divorce his wife.) Cukor was also an intimate friend, and his light touch and wry sense of humor keeps Pat and Mike, his third and final Tracy-Hepburn film, on its toes.

An exceptionally memorable - and hilarious - sequence depicts Pat's mental collapse during a tennis match with "Gorgeous" Gussie Moran, one of the top pro players of the day and one of several acclaimed athletes who make cameo appearances in the movie. (Others include golfers Babe Didrikson Zaharias, Betty Hicks, and Helen Dettweiler, and tennis greats Don Budge and Alice Marble.) When she sees Collier take his court-side seat mid-match, tension and insecurity overwhelm her. She double faults, begins to move in slow motion, envisions the net rising to catch all of her shots, and watches in horror as her racquet shrinks to the size of a ping-pong paddle. Anyone who has played any sport at any level can relate to what Pat goes through even while enjoying the spot-on humor. 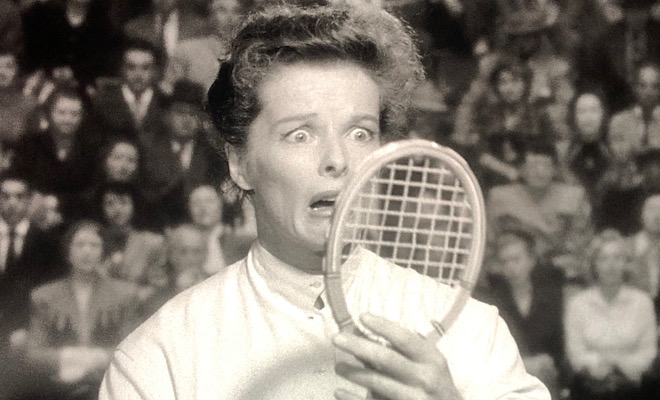 We can also empathize with Pat's self-esteem issues and struggle to believe in herself when the most important person in her life continually doubts her abilities. Owning one's own life is the film's main theme and Hepburn beautifully plays some poignant moments that depict both her crisis of confidence and steely resolve to overcome her frailties. Pat and Mike also makes some cogent points about male-female roles and champions feminism, and though sports psychology wasn't really a thing back then, the film probably inspired someone to invent the field. Kanin and Gordon make Pat a classic case study, and their insightful, witty, and wonderfully warm screenplay earned Pat and Mike its sole Oscar nomination.

Tracy, as always, is a marvel. In arguably his most colorful role opposite Hepburn, he fully embodies the Damon Runyon-esque Mike. Uncouth yet charming, pugnacious yet tender, and a man's man who learns to respect women, Mike is a jumble of contradictions packed into one lovable lug, and in a seemingly effortless portrayal, the always natural Tracy tackles the part with customary aplomb.

Hepburn has the trickier role, but she brings marvelous dimension to Pat, exhibiting both strength and vulnerability, as well as the resourceful spirit and gumption that's such a huge element of her screen persona. Her dressing down of a country club ninny (played to perfection by Phyllis Povah) who tries to diagnose her golf game is quintessential Hepburn, and it's a treat to watch her display her athletic prowess on both the golf course and tennis court.

It's also a hoot to see her physically take down future movie tough guy Charles Bronson in only his second billed role as a mob henchman. (He's billed under his real name, Charles Buchinsky, which - purposely or not - is spelled in the credits as Buchinski.) Other notable members of the excellent supporting cast include Aldo Ray as a dim-witted prizefighter who vies for Mike's professional attention; Jim Backus, the voice of myopic cartoon character Mr. Magoo and Gilligan's Island alum, as the club pro who first recognizes Pat's talent; TV's future Rifleman Chuck Connors in his film debut as a nonplussed sheriff; and Carl Switzer, best known as the bug-eyed, freckle-faced Alfalfa in the Our Gang/Little Rascals shorts, as a busybody busboy.

Women athletes have come a long way since Pat and Mike, but Cukor's film was one of the first to showcase and celebrate their talent and accomplishments. Its feminist viewpoint and depiction of psychological afflictions still ring true today, but in the end, it's the potent chemistry between Tracy and Hepburn that fuels and sustains this lovable comedy. The legendary duo may not seal this classic rom-com with a kiss, but they give it class...and that's what makes Pat and Mike endure. 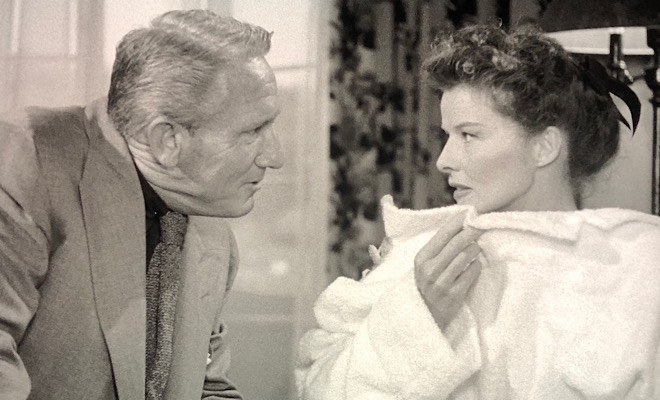 Pat and Mike arrives on Blu-ray packaged in a standard case. Video codec is 1080p/AVC MPEG-4 and audio is DTS-HD Master Audio 2.0 mono. Once the disc is inserted into the player, the static menu without music immediately pops up; no previews or promos precede it.

A brand new 4K restoration from the original camera negative yields a beautiful 1080p/AVC MPEG-4 transfer that faithfully honors the cinematography of the great William H. Daniels and puts a much-needed spring in Pat and Mike's step. Never before has this film looked so vibrant and clear. (The image is so sharp, you can even pick out Hepburn's double in the long shots of the tennis scenes.) Well-resolved grain lends the picture a lovely textured feel that resembles celluloid, and excellent contrast and grayscale produce a dimensional image full of depth and vitality.

Balanced light levels smooth the transitions between exterior and interior scenes, while rich black levels supply necessary weight, well-defined whites never bloom, patterns remain rock solid and resist shimmering, and excellent shadow delineation keeps crush at bay. Crisp close-ups showcase Hepburn's ruddy, freckled face and don't hide the wrinkles beginning to crop up. Best of all, not a single nick, mark, or errant scratch dot the pristine print, which makes Pat and Mike a joy to watch from start to finish and a big step up from the previous 2001 DVD.

The DTS-HD Master Audio 2.0 mono track supplies clear, well-modulated sound, although occasionally some of the dialogue sounds a bit muffled. The sports effects, such as the whoosh of the golf club on the tee-off and the thwack of the tennis racquet hitting the ball, are crisp and distinct, and atmospherics like crowd noise subtly permeate the soundscape. A wide dynamic scale handles all the highs and lows of David Raksin's light-hearted music score without a hint of distortion, and no age-related hiss, pops, or crackle intrude. Some of the dialogue is a bit difficult to understand, but that's the only blemish on this otherwise solid track.

The only extras are a one-minute animated teaser trailer and the four-minute original theatrical trailer hosted by "new sensation" Aldo Ray, who recounts how he broke into the movies and expresses his delight about co-starring with Tracy and Hepburn.

Sparkling performances, a clever script, and breezy direction from the masterful George Cukor make Pat and Mike one of the best Spencer Tracy-Katharine Hepburn films. The story of a talented female athlete who cracks whenever her disapproving fiancé watches her play and the slightly crooked manager who helps her realize her potential showcases the pair's incomparable chemistry, as well as Hepburn's athletic prowess. Cameos by a host of real-life sports stars lend this rom-com an authentic feel, while a brand new 4K restoration from the original camera negative punches up an already punchy motion picture. An upgrade is a must for Tracy-Hepburn fans, and any classics buff who hasn't yet seen Pat and Mike should definitely give this high-quality disc a spin. Highly Recommended.