The title says it all. Mad Love chronicles a mad doctor's twisted obsession with a beautiful actress and stands as one of the most creepy and disturbing horror movies of the 1930s. In his American film debut, Peter Lorre files a riveting performance, while Karl Freund's elegant direction weaves a hypnotic spell. Warner Archive's new restoration showcases all the artistry of this fascinating antique that still sends shivers up the spine. Highly Recommended.

When most film fans think of Golden Age horror, Universal Pictures - which brought us such spine-tingling creature-features as Dracula, Frankenstein, The Mummy, and The Wolf Man - instantly springs to mind. Universal may have dominated the horror market during the 1930s, but Warner Bros, the home of gritty gangster flicks, and even Metro-Goldwyn-Mayer, which favored musicals over monsters, dabbled in the genre. MGM, in fact, produced one of the most controversial and grotesque horror movies ever made (Tod Browning's Freaks in 1932), so maybe it's not surprising the studio also mounted the deliciously macabre and sexually deviant Mad Love a few years later.

Starring Peter Lorre in his American film debut and featuring a plot that would be recycled countless times in various forms over the next several decades, Mad Love stands as one of the era's most inventive and artistic horror exercises. Its lack of notoriety - except among the genre's cognoscenti - might be a result of its poor box office performance, despite glowing reviews, but the eerie tale of sexual obsession, psychosis, and murder holds up wonderfully well today. Under Karl Freund's expert direction, Mad Love mixes fright and humor with an engrossing story, riveting portrayals, and an elegant, expressionistic style that recalls some of the great German silent films of yore. 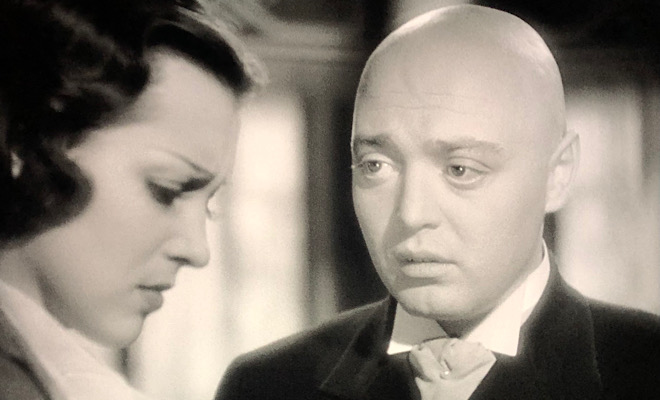 Dr. Gogol (Lorre) is an esteemed Paris surgeon by day, but at night he's a fanboy of the ghoulish Théâtre des Horreurs, attending every performance and worshipping at the feet of the troupe's ravishing leading lady Yvonne Orlac (Frances Drake), who endures a series of agonizing tortures on stage. Gogol, for lack of a better phrase, gets off on her pain and distress, but when he finally meets his object of sadistic desire, Yvonne - who is married to famous concert pianist Stephen Orlac (Colin Clive) - cringes in his presence and rebuffs his attentions. Her rejection only further fuels Gogol's passion, but his avenues of pursuit all seem blocked.

A glimmer of hope occurs when Stephen is seriously injured in the wreck of a train that is also transporting convicted murderer Rollo (Edward Brophy), a knife-wielding maniac, to his execution. Rollo survives the crash only to face the guillotine the following day, but Stephen's prized hands are irreparably injured and require amputation. Yvonne, who can't fathom Stephen's inability to ever play the piano again, disavows the diagnosis and seeks counsel from Dr. Gogol, who assures her he can repair the mangled hands. Yet when Gogol also concludes amputation is the only option, he secretly arranges for Rollo's body to be brought to his laboratory and, unbeknownst to Stephen and Yvonne, grafts Rollo's hands onto Stephen's wrists.

Though the miracle surgery delights the couple, it also ties them to Gogol, who fancies Yvonne even more ardently than before. Trouble begins to brew, and when Stephen discovers his hands prefer to brandish and throw sharp objects - especially knives - rather than tinkle the ivories, and seem to possess a mind of their own, he becomes at first disturbed and then distraught...much to the dastardly delight of Gogol, who becomes increasingly deranged. 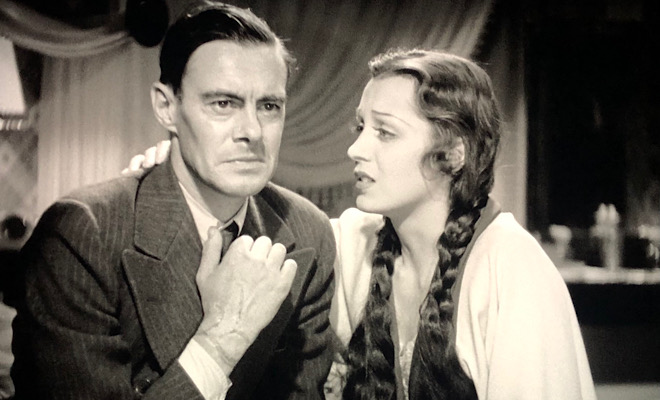 Elements of Frankenstein and Mystery of the Wax Museum pervade the tale (Gogol keeps a life-size wax figure of Yvonne in his home and perversely interacts with it), but Freund's creative and striking direction helps us dismiss the similarities. An Oscar-winning cinematographer who is perhaps best known for developing the three-camera format for shooting TV sitcoms when he was the director of photography for the legendary series I Love Lucy, Freund helmed almost two dozen films in the 1920s and '30s. Mad Love would prove to be  his final directorial assignment, and that's a crying shame, because the movie oozes style and flaunts an elegant fluidity that keeps us transfixed throughout. Employing mirrors to emphasize Gogol's schizophrenia, double-exposures to denote drunkenness, distorted images and superimpositions to effect a sense of unease, and a subjective camera long before Hitchcock hijacked the process, Freund - with the help of esteemed cinematographer Gregg Toland, who would later photograph Citizen Kane - constructs a host of thrilling images, including a truly breathtaking big reveal. Here's a taste, courtesy of a clip Warner Archive released a few years before the film's restoration...

Lorre, with his pudgy physique, bulging eyes, pouty mouth, and shiny, egg-shaped bald pate embodies the crazed Gogol, and his laser-focused, pitch-perfect performance prompted Charlie Chaplin to tout him as "the greatest living actor'" after seeing the film. At once pathetic, grotesque, devious, and frightening, Lorre masterfully juggles the pieces of Gogol's splintered personality and the result is a riveting turn marked by an array of fascinating facial expressions that Freund showcases to the hilt. Unlike many horror portrayals, there's a depth and dimensionality that distinguish Lorre's work in Mad Love, much like they did in his breakthrough role as a creepy, murderous pedophile in Fritz Lang's classic M a few years earlier. Gogol's forbidden desires drive him insane and Lorre makes the transformation disarmingly real and relatable,

As the object of his twisted obsession, the beautiful Drake nicely peppers her victimized damsel-in-distress part with some spunk and spitfire. She creates fine chemistry with both Lorre and Clive, and makes us feel her repulsion, desperation, and fear more viscerally than many of her horror heroine counterparts. Drake, who the same year played the tragic Eponine in the first film version of Les Misérables, only made two dozen movies before retiring from the screen in 1942, but she makes such a marvelous impression here it's tough not to rue her brief career. 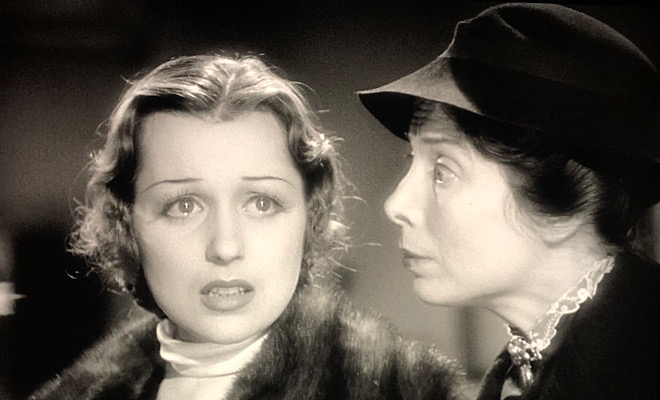 Clive, who memorably portrayed Dr. Frankenstein in the 1931 original, as well as the 1935 sequel, and creates a monster from dead body parts in both films, ironically becomes a monster here, sporting deformed hands culled from a corpse and laced with an array of thick connective scars. Perhaps because of his participation in the Frankenstein films, Clive seems to deeply identify with his Mad Love character and files a moving, believable portrayal. His palpable anguish, despair, and disgust over his predicament further foment the film's fire and nicely complement Lorre's lunacy.

Ted Healy, whose most famous showbiz contribution was arguably the creation of the iconic comedy trio The Three Stooges, supplies some comic relief as a fast-talking, intrepid newspaperman. The role rips off similar parts played by Lee Tracy in Doctor X and Glenda Farrell in Mystery of the Wax Museum, but Healy puts his own distinctive spin on it. (Sadly, Clive and Healy - both chronic alcoholics - would both die two years later at age 37 and 41, respectively.) It's also a treat to see Sara Haden, fondly remembered as the maiden Aunt Milly in the Andy Hardy films, as Yvonne's animated maid and the prolific Billy Gilbert, who enlivened more than 200 movies during his career and makes the most of his (very) limited screen time here.

Mad Love packs plenty of thrills, atmosphere, and deviance into its brisk 68 minutes, making it one of the most effective and entertaining horror movies of the 1930s. Freund's film may be perennially overshadowed by Universal's more popular and overtly commercial horror product, but its artistry, invention, script, and performances eclipse many more familiar genre titles. If you're mad about Golden Age horror, give Mad Love a spin. It's insanely good. 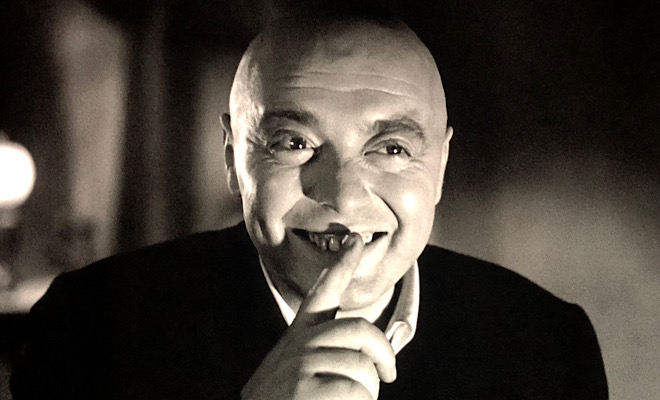 Vital Disc Stats: The Blu-ray
Mad Love arrives on Blu-ray packaged in a standard case. Video codec is 1080p/AVC MPEG-4 and audio is DTS-HD Master Audio 2.0 mono. Once the disc is inserted into the player, the static menu without music immediately pops up; no previews or promos precede it.

A new HD master struck from a 4K scan of the best preservation elements yields a gorgeous 1080p/AVC MPEG-4 transfer that beautifully highlights the film's expressionistic photography and special visual effects. Excellent clarity, contrast, and grayscale produce a vivid, contoured picture that immerses us in the eerie atmosphere, while faint grain maintains the essential feel of celluloid. Rich blacks and exceptional shadow delineation heighten the creepy mood and the crisp whites of Lorre's surgical outfit and cap resist blooming.

Costume patterns remain rock-solid, textures are well-rendered, and all the distorted images, superimpositions, and double-exposure frames blend seamlessly into the film's fabric. The close-ups of Lorre's pasty face with its chubby cheeks, bulging eyes, and shiny bald pate dazzle the eye (you can even see the razor bumps beneath his thick makeup), but the soft-focused tight shots of the beautiful Drake are equally arresting. No nicks, marks, or errant scratches dot the pristine source material, which means nothing distracts from all the grotesquerie on screen. Golden Age horror fans will certainly want to trade their DVD for this top-notch Blu-ray presentation.

The DTS-HD Master Audio 2.0 mono track supplies clear, well-modulated sound that really enhances the atmosphere of this horror classic. Mad Love features one of the first music scores by Oscar-winning composer Dimitri Tiomkin, and a wide dynamic scale handles all of its highs and lows without a hint of distortion. Sonic accents like screeching train whistles, piercing screams, and shattering glass are wonderfully distinct, while subtle atmospherics nicely enhance the mood. Lorre's accent is a bit thick, but even his whispered ravings are easy to comprehend. A hint of surface noise can be detected at times, but that's the only blemish tarnishing this otherwise strong and effective track.

Both of the supplements from the 2006 DVD have been ported over to this Blu-ray release.