If you love monster movies - heck, even if you don’t - Universal Classic Monsters: Complete 30-Film Collection is an essential boxed set. All of the studio’s famous chillers starring such legendary creepy creatures as Dracula, Frankenstein, The Mummy, Invisible Man, Wolf Man, Phantom of the Opera, and Creature from the Black Lagoon are here, spread across 24 Blu-ray discs with lovingly restored video and audio and featuring hours of absorbing, well-produced supplements. There’s even a full-color, 48-page commemorative book that salutes Universal’s impressive and lasting horror film legacy. Without a doubt, this monster mash is a graveyard smash, and no cinephile worth his or her salt should be without it. Must Own.

Most of all, though, the Universal monster films are iconic. And the legions of fans who revere Frankenstein, Dracula, Wolf Man, The Mummy, and that slimy Creature from the Black Lagoon, among others, are rightfully shrieking with joy that the studio is honoring its classic horror catalogue at long last with a massive and comprehensive box set. Universal Classic Monsters: Complete 30-Film Collection trumps the studio’s previous Essential Collection in spades, containing almost four times as many films, most of which are new to Blu-ray. There are 24 discs in all (compared to eight in the previous collection), beginning with the original Dracula in 1931 and ending with The Creature Walks Among Us in 1956. That’s a generation of classic horror films and a legacy no other studio can match. A full-color, 48-page commemorative book - the same book that is included in the Essential Collection - chronicles and salutes that legacy through analysis, biographies, trivia, photos, poster art, and reproductions of correspondence and promotional materials, and it’s a beautiful complement to the set. 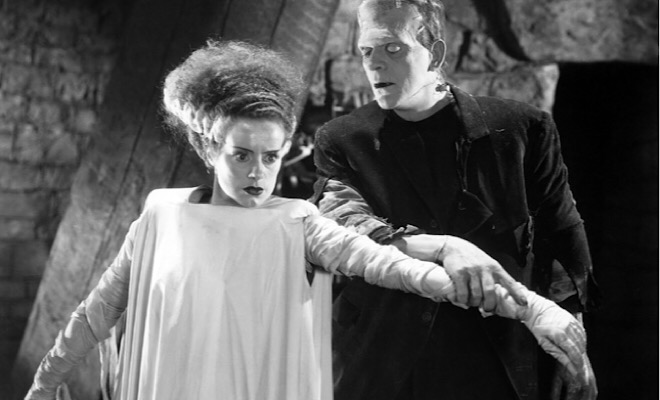 Two of the films, Creature from the Black Lagoon and Revenge of the Creature are presented in 3D and 2D versions. You may have heard or read that Universal, according to a press release, has “identified a manufacturing issue which may affect the presentation of the 3D Blu-ray offering“ of Revenge of the Creature. (Basically, the 3D does not play automatically - you must force the presentation through your 3D TV, and even then it is not full 1080p 3D, due to incorrect authoring. When forced, the 3D still looks pleasing, but I’m sure the image will appear crisper, more vivid, and more lifelike after proper correction by Universal.) If you’ve already purchased this hefty box set, you can receive a replacement Revenge of the Creature/The Creature Walks Among Us disc by emailing Universal at [email protected] (Be sure to include your shipping address, daytime phone number, and a copy of your sales receipt or a photo of the two discs and the packaging.) If you haven’t yet purchased the set, you’ll have to wait a bit to get it. Universal has (rightfully) pulled the collection from retailers and will re-release it after the Revenge of the Creature/The Creature Walks Among Us disc has been repaired and inserted into new editions of the set. As of this writing, Universal hopes to re-release the collection in mid-October, but that target date is tentative. 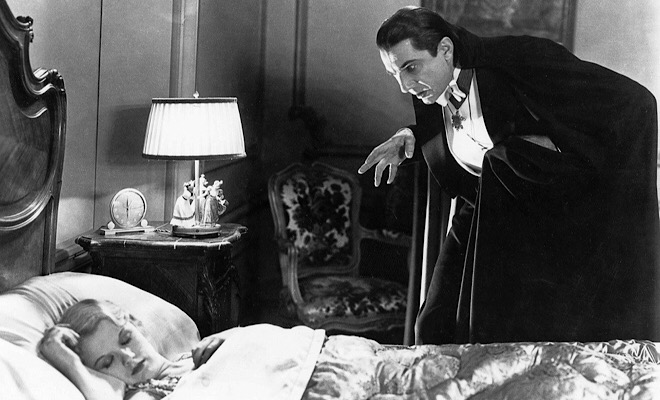 For complete HDD reviews of the previously released --

-- all but one written by HDD’s horror film expert, M. Enois Duarte - click on the corresponding titles. In the interest of space, I will not individually review the other 21 films in the set. Like most sequels and follow-ups, they pale a bit when compared to the originals. Some are better than others (Dracula’s Daughter and Son of Frankenstein are especially good), and it’s a treat to have the three whimsical Abbott and Costello comic adventures included as well. The duo’s bumbling interactions with Frankenstein, Dracula, the Wolf Man, the Mummy, and the Invisible Man temper the seriousness of the other films and show how Universal cleverly revitalized and expanded the scope of its franchise.

This set is so valuable - from both a physical and cultural standpoint - because it documents the breadth and explores the impact of Universal’s contribution to this unique genre. Several of the movies are not great. They were made cheaply for a quick buck and most likely would never warrant a Blu-ray release on their individual merits, but are nevertheless a vital cog in the larger wheel of this segment of film history. Watching the evolution of the franchise is fascinating, and while doing so, it’s impossible not to appreciate and revere all the talent involved, both in front of and behind the camera. Even if you’re not a big monster movie fan, you’ll enjoy spotting the parade of fine character actors who populate each film. I was shocked to see John Barrymore, of all people, starring in the surprisingly delightful The Invisible Woman, while Peter Lorre, Vincent Price, June Lockhart, Margaret Hamilton, John Carradine, and many others enliven the proceedings elsewhere. Without a doubt, this collection deserves a prominent spot in your collection. 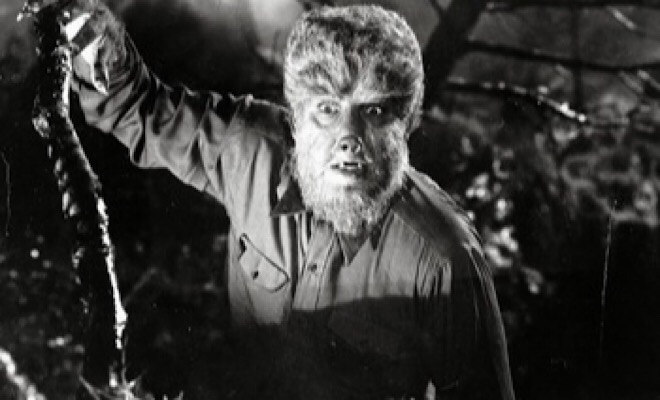 Universal Classic Monsters: Complete 30-Film Collection arrives on Blu-ray packaged in a sturdy box with embossed lettering on the front, top, and spine. Seven cases housing 24 Blu-rays and the aforementioned 48-page commemorative book reside inside. The Dracula, Frankenstein, Invisible Man, Mummy, Bride of Frankenstein, Wolf Man, Phantom of the Opera, Creature from the Black Lagoon, and Abbott and Costello Meet Frankenstein discs are exactly the same as the ones previously released with regard to video and audio transfers and supplements. Video codec for all the discs in the set is 1080p/AVC MPEG-4 and audio is DTS-HD Master Audio 2.0. Some of the discs have full-motion main menu screens with audio, while other discs have menus that can only be accessed by depressing the pop-up menu button on your remote.

Stunning is the only way to describe all of the transfers in this massive collection. You’d think there would have to be a few bad apples in such a comprehensive set, but there really aren’t. All 30 films have been meticulously and lovingly restored, so even the non-3D films leap off the screen. Clarity and contrast are superb for such antiquated movies, and the superior quality allows us to drink in all the artistry that each of these films exudes. Grain is evident, but it’s beautifully resolved, supplying necessary texture and maintaining the warm, cozy feel of celluloid. Blacks are rich and deep, but crush is rarely an issue, while whites are bright and crisp. Excellent gray scale variance enhances depth and details (you can even see the faint strings supporting a fake bat in House of Dracula), patterns remain rock solid throughout, and sharp close-ups nicely highlight fine facial features. A few errant specks and marks crop up occasionally (Werewolf of London contains the most noticeable damage), but they rarely distract or detract from one’s enjoyment of these films.

DTS-HD Master Audio 2.0 mono tracks grace all the discs, and the sound quality is quite good across the board. It’s especially impressive on the early talkies like Dracula and Frankenstein, which were recorded on primitive equipment that amplified any imperfections. All of the tracks have been nicely cleaned up and provide clear, well-modulated audio with almost no surface noise. A wide dynamic scale embraces all the highs and lows, and no distortion is evident. The music scores sound rich and full, and all the dialogue is clear and comprehensible. The one track that’s a little rough around the edges is Werewolf of London, which features more pops, crackles, and static than all of the other tracks combined. But that’s the only aural hiccup in this stellar set.

For more in-depth audio reviews, please click on each title:

Universal Classic Monsters: Complete 30-Film Collection contains a wealth of supplemental material, including audio commentaries, documentaries and featurettes, vintage short films, trivia tracks, and trailers. Most of it has been previously released and appears on the Dracula, Frankenstein, Mummy, Invisible Man, Bride of Frankenstein, Wolf Man, Phantom of the Opera, Creature from the Black Lagoon, and Abbott and Costello Meet Frankenstein discs. For a complete rundown and reviews of the special features on those discs, please click on their respective titles.

As far as the other films in the collection are concerned, most only include a trailer, if that. The exceptions are Revenge of the Creature, which features an audio commentary with actress Lori Nelson and film historians Tom Weaver and Bob Burns, and The Creature Walks Among Us, which includes an audio commentary by Weaver and Burns. A few of the discs in the set also include a featurette celebrating Universal’s 100th anniversary a few years ago. 100 Years at Universal is composed of four different installments: The Lot, Unforgettable Characters, Restoring the Classics, and The Carl Laemmle Era. The first two chapters include segments about the famous Universal monster films, but the latter two are more interesting overall, especially Restoring the Classics, which provides a thorough look at the restoration process.

If you love old monster movies - heck, even if you don’t - Universal Classic Monsters: Complete 30-Film Collection is a cinephile’s dream. All of the studio’s Frankenstein, Dracula, Mummy, Wolf Man, Invisible Man, and Creature from the Black Lagoon films are here, as well as the 1943 version of The Phantom of the Opera and all three Abbott and Costello comic thrillers. Most importantly, all have been beautifully restored to practically pristine quality, so each movie looks and sounds as fresh and vibrant as possible. Hours of absorbing special features and a handsomely produced 48-page book enhance the collection and provide an important historical perspective to this popular genre. Once Universal fixes the Revenge of the Creature 3D authoring issue, don’t hesitate to go all in on this comprehensive set that should be a part of every serious movie lover’s collection. Must Own.

Sale Price 114.5
List Price 149.98
Buy Now
3rd Party 109.99
In Stock.
See what people are saying about this story or others
See Comments in Forum
Previous Next
Pre-Orders
Tomorrow's latest releases