Mystery of the Wax Museum

Once considered a lost film, Mystery of the Wax Museum has not only been found but also meticulously and gloriously restored to its original two-color Technicolor splendor by the UCLA Film and Television Archive and The Film Foundation. Director Michael Curtiz's 1933 mix of ghoulish horror and romantic comedy (spiked with a few iconic Fay Wray screams) looks as lifelike as a Madame Tussaud's wax figure, thanks to another terrific Warner Archive transfer that celebrates the novelty of early color while honoring the artistry that makes this film so engaging. Excellent lossless audio and a welcome spate of absorbing supplements also distinguish this revelatory release that surely will tickle the fancy of every classic movie fanatic. Highly Recommended.

Fay Wray was Hollywood's first and finest Scream Queen, and over the course of 1932 and '33 her vocal chords got quite a workout. Though best known for shattering decibel levels in King Kong, Wray shrieked her way through four horror films in a row before that iconic monster movie. First, there was Doctor X, then The Most Dangerous Game and The Vampire Bat, and finally Mystery of the Wax Museum, an engaging mix of thrills, grotesquerie, comedy, and spectacle from director Michael Curtiz. One of the last surviving films shot in the fledgling two-color Technicolor process that preceded the eventual three-strip standard, Mystery of the Wax Museum has been lovingly and magnificently restored by the UCLA Film and Television Archive and The Film Foundation, and now Warner Archive fetes this lost classic with a breathtaking Blu-ray rendering.

Like color tinting before it and 3-D and Cinerama two decades later, two-color Technicolor was a popular movie fad that was running out of gas by the time Mystery of the Wax Museum went into production. Warner Bros, which had partially financed the format's development, even tried to wriggle out of its contract with Technicolor and shoot the film more economically in black-and-white, but lucky for us, bad blood between studio chief Jack Warner and Technicolor pioneer Herbert Kalmus quashed any proposed compromise. Though Mystery of the Wax Museum surely would have delivered the goods in black-and-white, it's much more eye-catching and atmospheric bathed in the red and green hues of this primitive, unique process.

The film kicks off with an ambitious and impressive fire sequence that occurs after Joe Worth (Edwin Maxwell), the financial backer of a failing London wax museum, informs Ivan Igor (Lionel Atwill), the gifted wax artist who sculpts the historical figures and treats them like his beloved children, that he's setting the museum ablaze so he can file an insurance claim and recoup his investment. An outraged Igor vociferously objects, inciting a fistfight amid the flames. Joe eventually knocks Igor unconscious and locks him inside the inferno, leaving him to perish along with his decomposing wax creations, whose melting faces eerily resemble some of the climactic images in Raiders of the Lost Ark. 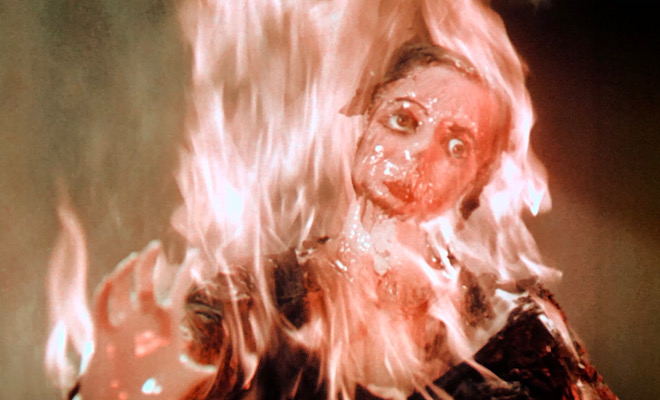 Fast forward 12 years to New York City, where Igor (who somehow survived the fire, but is confined to a wheelchair) prepares to open a new wax museum. Coincidentally - or not - several bodies have disappeared from the city morgue over the past several months, and when intrepid, (very) fast-talking reporter Florence Dempsey (Glenda Farrell) spots an uncanny resemblance between recently deceased model Joan Gale (Monica Bannister) and a Joan of Arc wax figure in Igor's museum, she gets suspicious. Florence's roommate, Charlotte Duncan (Wray), just happens to be engaged to one of the museum's wax artists, and when she catches Igor's eye, he becomes obsessed with her face, believing it's a dead ringer for his prized Marie Antoinette figure that was incinerated a dozen years earlier. Can Florence solve the mystery of Joan Gale's death, explain the missing corpses, and evade the ghoulish monster skulking in the museum's shadows before Igor ensnares Charlotte in his clutches?

Part of the horror craze that swept the nation following the blockbuster success of Dracula and Frankenstein a few years before, Mystery of the Wax Museum adds some welcome humor to the formula, resulting in a satisfying creature feature that supplies plenty of hokey thrills without ever taking itself too seriously. Curtiz's film is littered with titillating pre-Code references to illicit sex, drug addiction, and bootlegging, which considerably spice up the action. I almost fell out of my chair when the sassy Farrell sidles up to a crusty Irish cop and needles him with the cheeky opening salvo, "How's your sex life?" I can't ever recall hearing a 1930s movie character utter a line like that!

Wray looks beautiful in Technicolor and makes the most of a largely ornamental role, but it's Farrell who carries the film. The best wisecracking dame on the Warner lot, Farrell was one of the era's few actresses tough enough to go toe-to-toe with the likes of Cagney, Raft, and Robinson. Here she's spunky, alluring, and nobody's fool. She talks way faster than a mile a minute, and it's a hoot watching her furiously chase one hot tip after another as she races to solve the mystery. Her scenes with perennial Warner sidekick Frank McHugh, who plays her hard-boiled editor with an equally well-oiled motor mouth, crackle with the kind of rough-and-tumble romantic tension for which the studio was famous. Despite delivering rapid-fire dialogue with more rat-a-tat-tat than a machine gun, the two never miss a beat. 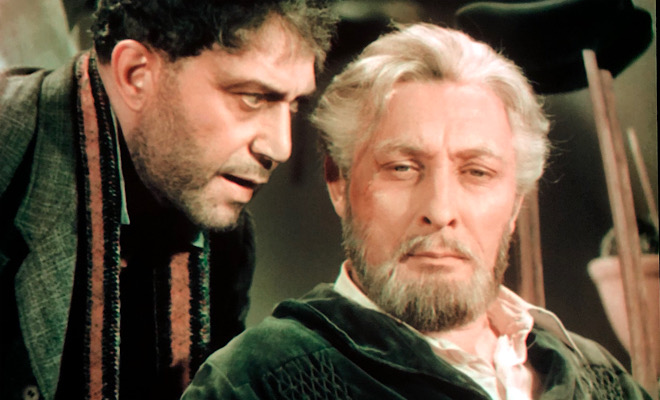 Atwill was an accomplished stage actor, but he loved slumming in these villainous, often psychotic roles, and to his credit, he treats them with the utmost seriousness. Plenty of performers would be tempted to ham up a role like Igor, but Atwill seems to relish embracing his dark side and gives the part of the mentally anguished, physically compromised artiste his all.

Curtiz's best films (Casablanca chief among them) still lay ahead of him, but he handles the rigorous chores of Mystery of the Wax Museum with aplomb. In addition to navigating the challenging waters of early Technicolor, he fashions impressive set pieces and keeps the story chugging along at a brisk clip. Plot holes abound and the script leaves a bunch of dangling loose ends, but that's typical for this type of film, which tends to value thrills, spectacle, and atmosphere over narrative cohesion. Mystery of the Wax Museum delivers in the most vital areas and supplies an array of engaging performances to further increase its entertainment quotient.

Though the remake, House of Wax, would eclipse Mystery of the Wax Museum 20 years later, thanks to full-blown Technicolor, 3-D, and Vincent Price, the original should not be overlooked...and this smashing restoration ensures it never will be again. Curtiz's movie is a marvelous curio and fun ride, and now it's back with a very fitting vengeance. 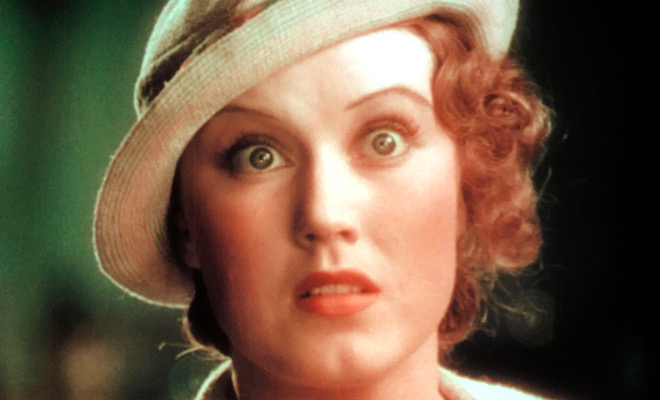 Mystery of the Wax Museum arrives on Blu-ray packaged in a standard case. The brand new restoration by the UCLA Film and Television Archive and The Film Foundation is presented here in a 1080p/AVC MPEG-4 encode with DTS-HD Master Audio 2.0 mono sound. Once the disc is inserted into the player, the static menu without music immediately pops up; no previews or promos precede it.

The fact we can see Mystery of the Wax Museum at all, let alone in such splendor, is something of a small miracle. For years, the film was considered lost, then in the late 1970s a complete print was discovered in studio chief Jack Warner's personal collection after his death. That print, along with a French "work print" that contains some snippets missing from the Warner print, forms the basis of this stunning restoration by the UCLA FIlm and Television Archive and The Film Foundation. The resulting 1080p/AVC MPEG-4 transfer is a joy to behold and feast for the senses, despite the limited color spectrum on display.

Two-color Technicolor, which relies on varied shades of red and green to color the frame, lacks the consistent brilliance of its three-strip counterpart, but it's still quite lovely and produces some eye-popping images. Reds remain rather muted throughout, often adopting a salmon hue, but the greens can be gloriously lush. An emerald suit worn by Fay Wray lights up the screen and rivals any of the Emerald City costumes in The Wizard of Oz, while tinted walls in the museum's bowels glow with an alien-like creepiness. Pastels come off well, browns and beiges are spot on, and flesh tones look surprisingly natural. 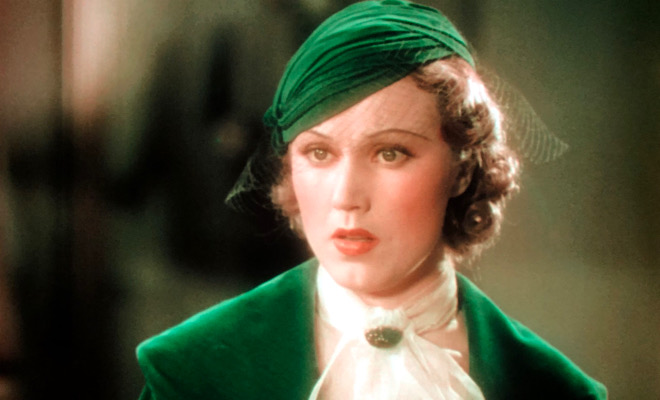 Though the rare, unique two-color process is a major attraction of this release, it's not the whole story of this transfer. A lot of restorative work has been done, but the movie's original grain structure remains intact and preserves the essential feel of celluloid. Exceptional contrast and clarity produce a beautifully balanced image with rich, deep black levels, crisp whites, and excellent shadow delineation. Costume textures come through well, background details are easy to discern, and often breathtaking close-ups showcase both the glamor of Wray and Farrell and the leathery, wrinkled ghoulishness of the mysterious figure lurking in the shadows. 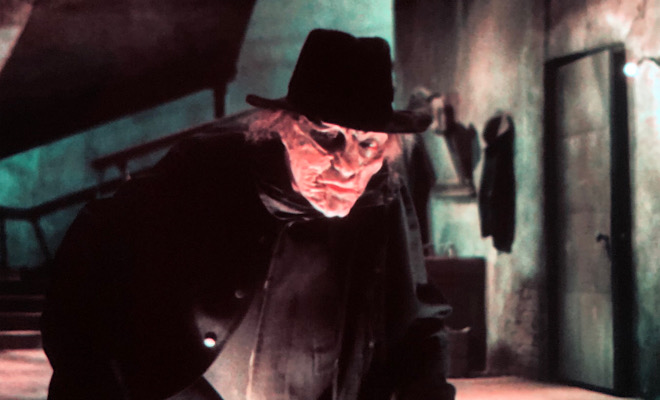 Another amazing aspect of this transfer is the pristine quality of the source material. It's one thing to restore a film, but to remove every nick, mark, scratch, and blotch from an 87-year-old movie is nothing short of astounding. I honestly can't recall a motion picture of this vintage that's as clean and fluid. It's a privilege to see the fruits of all the labor that went into restoring Mystery of the Wax Museum, and this superior transfer makes one wish every classic film could receive the same attention.

Amid all the hoopla surrounding the glorious video restoration of Mystery of the Wax Museum, it's easy to forget the audio was restored as well. The extensive clean-up that makes this DTS-HD Master Audio 2.0 mono track sound so clear and vibrant may go unnoticed by those mesmerized by the visuals, but it deserves commendation. Early sound films often suffer from myriad imperfections born from the primitive recording equipment used at the time, but this incarnation lacks the tinny, harsh, distorted qualities that often afflict such vintage tracks. The audio is clear, vibrant, and devoid of such age-related defects as hiss, pops, and crackle. Atmospherics like rain and crowd noise subtly infuse the track without overwhelming it, while sonic accents like thunder claps, slamming doors, the bubbling cauldron of wax, and - of course - Fay Wray's iconic screams are crisp and distinct. Eerie silences are utterly clean, and even the quietest effects, like the faint squeak of Igor's wheelchair as it glides across the floor or the muffled moans of a corpse, make an impression. I can't say I could understand every word of dialogue, but that's only because Glenda Farrell and Frank McHugh just talk too darn fast at times! Overall, though, the exchanges are well prioritized and easy to comprehend. When examined in its proper context and compared with other films from the same period, this track far exceeds expectations and is a major asset to this disc.

Lovingly restored to its full two-color Technicolor splendor, Mystery of the Wax Museum at last comes to Blu-ray sporting a stunning transfer that's as vivid and lifelike as the wax figures in Igor's menagerie. Director Michael Curtiz's horror classic about nefarious doings and creepy characters at a New York City wax museum tempers its over-the-top thrills with comedy and romance, and the result is a fun movie ride that's fast-paced, packed with snappy dialogue, and brimming with pre-Code titillation. In addition to the breathtaking five-star video transfer, a newly restored audio track and a few choice supplements distinguish this terrific release from Warner Archive, which comes highly recommended.