Before the renowned Mystery of the Wax Museum dazzled audiences in 1933, director Michael Curtiz, stars Lionel Atwill and Fay Wray, and two-color Technicolor all joined forces for Doctor X, a rollicking thriller that deftly mixes horror, mystery, and comedy, and gives its more famous follow-up film a run for its money. Warner Archive's new HD master struck from a new 4K restoration of the movie's "last-known surviving nitrate Technicolor print" brings this ultra-rare classic back to brilliant life, and the inclusion of the long-shelved black-and-white version of Doctor X further distinguishes this noteworthy and impeccably executed release that comes very Highly Recommended.

If you think today's horror films are grisly, check out some of Hollywood's pre-Code creature features. The thrillers of the early 1930s may lack the graphic violence of modern slasher flicks, but they don't shrink from exploring bloodcurdling themes. Take Doctor X, Warner Bros' inaugural foray into the horror genre. In addition to murder, rape, and prostitution, director Michael Curtiz's ghoulish 1932 fright-fest throws cannibalism, artificial limbs, and synthetic flesh into the mix as it chronicles an eccentric doctor's attempt to catch a crazed serial killer.

The story opens at the Mott St. Morgue in New York City, where the body of the Moon Killer's latest strangled victim arrives to be examined. The killing spree fascinates wiseass newspaper reporter Lee Taylor (Lee Tracy), who hopes to get the scoop of the century when the cops crack the case. Because all the corpses have been ravaged by a specialty surgical knife (and possibly cannibalized afterward), Police Commissioner Stevens (Robert Warwick) links the killings to the Academy of Surgical Research, the only place where the distinctive implement has been used. Dr. Jerry Xavier (Lionel Atwill) runs the school, which sponsors the research of four other workaholic - and very strange - doctors who conduct bizarre experiments based on outlandish theories.

Dr. Xavier convinces the police to back off and give him 48 hours to root out the culprit himself. (Imagine that ever happening today!) He then summons his colleagues to his remote Long Island estate, where he plans to hook them up to a contraption that will monitor their brainwaves while they watch a reenactment of one of the murders. Dr. X believes the killer will exhibit the highest degree of brain activity, which will betray his identity...but of course his carefully executed plans go awry and bedlam ensues, thanks in part to Lee's incessant nosing around (which makes him a prime target for the murderer) and some complications that put Xavier's lovely, supportive daughter Joanne (Fay Wray) in dire jeopardy. 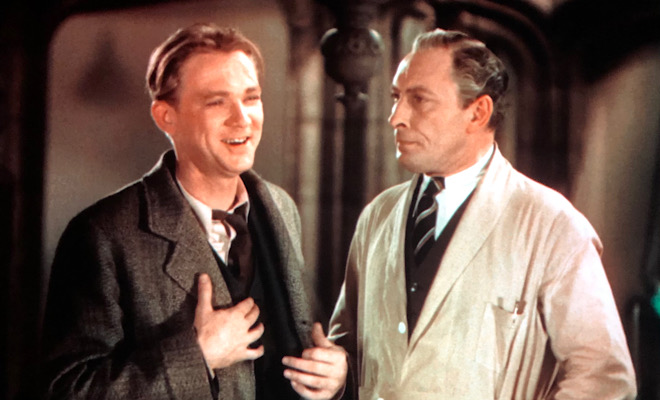 Warner Bros approached horror differently than Universal, the genre's flagship studio that produced Dracula and Frankenstein the year before. Believing unrelieved tension and gruesome acts of violence would send audiences over the proverbial edge, Warner demanded comedy play a major role in their chiller films. Doctor X goes a bit overboard in that regard, with Lee Tracy's goofy antics and a running gag involving a joy buzzer grabbing too much attention, but the creepy story and quirky characters still win the day. Curtiz crafts many spine-tingling moments and sprinkles in a few heart-stopping jolts to produce an immensely satisfying thriller that brims with mystery and macabre elements. Though Mystery of the Wax Museum, which Curtiz also directed, may be flashier, I found Doctor X more suspenseful and atmospheric.

Atwill, in his first noteworthy film role, shines as the cryptic title character, mixing erudite sophistication with dour gravity. His part isn't particularly showy, but he commands the screen and keeps us guessing as to his guilt or innocence. An acclaimed stage actor, Atwill enjoyed slumming in countless low-grade horror movies after Doctor X (until a sex scandal tarnished his reputation and derailed his career), and he radiates enthusiasm for the genre here. 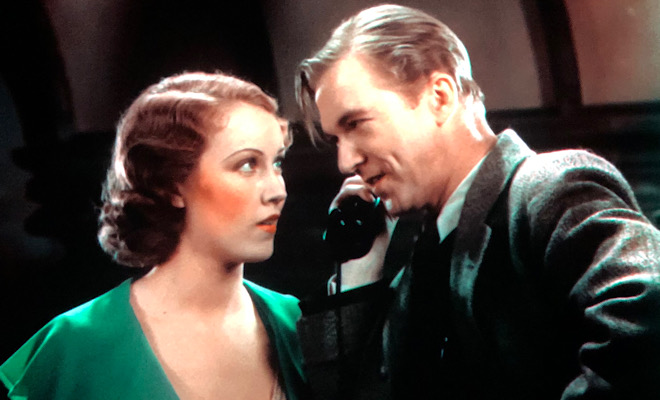 Doctor X also marks scream-queen Fay Wray's initial foray into horror (her first "line" in the film is, quite fittingly, a shriek), but after a few more high-decibel roles - culminating with an iconic turn in the original King Kong a year later - she fought against the typecasting. Wray's potent pipes often unfairly overshadow her talent; she files a natural portrayal in Doctor X that helps ground the often preposterous plot. She also looks gorgeous in color and clicks with the raffish Tracy, who rises above much of the script's corny schtick. A very young Preston Foster makes a big splash as Dr. Wells, who brandishes an artificial arm, keeps a preserved human heart on his desk, and is "a student of cannibalism." Though the temptation to overplay such a wacko character must have been immense, Foster exercises admirable restraint while still obviously enjoying his assignment.

Doctor X will never join the ranks of Hollywood's best classic horror films, but 89 years after it first wowed audiences, it remains stylish, slick, sufficiently spooky, somewhat surprising, and loads of fun. The two-color Technicolor makes this curio all the more noteworthy and intriguing, and the assured direction of Curtiz improves the kitschy material. If you like your thrillers on the lighter side (kinda like Get Out), you'll surely get a kick out of Doctor X. 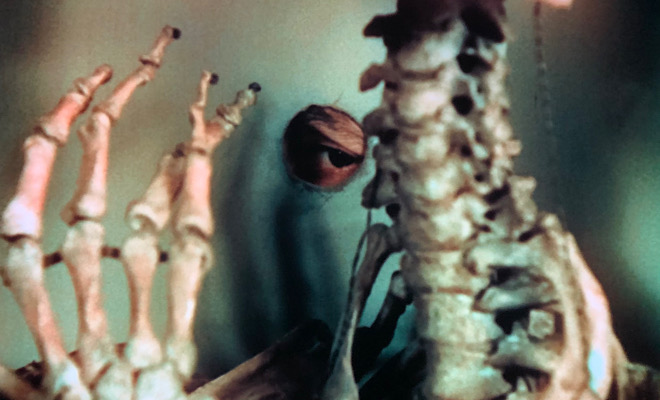 Vital Disc Stats: The Blu-ray
Doctor X arrives on Blu-ray packaged in a standard case. Both the two-strip Technicolor and black-and-white versions of the film are included on the disc. Video codec is 1080p/AVC MPEG-4 and audio is DTS-HD Master Audio 2.0 mono. Once the disc is inserted into the player, the static menu with music immediately pops up; no previews or promos precede it.

Just like its fellow two-color Technicolor feature Mystery of the Wax Museum, Doctor X has been lovingly restored by the UCLA Film & Television Archive and The Film Foundation, and just like Mystery of the Wax Museum, the color version of Doctor X was long thought to be lost. Lucky for us, prints of both films turned up in the private collection of former Warner Bros studio chief Jack Warner following his death in 1978. We're even more fortunate that Doctor X has recently received a new 4K restoration, resulting in a new HD master that yields a splendid 1080p/AVC MPEG-4 transfer that maximizes the impact of the color palette. Greens and reds predominate in Doctor X, and they're lushly rendered. An emerald satin gown worn by Wray dazzles the senses, and the verdant tints that bathe several scenes lend the proceedings an appropriately spooky aura. Though the reds aren't quite as true and vibrant as they would become with the advent of three-strip Technicolor a few years later, they make a bold statement nonetheless.

The two-color Technicolor used for Doctor X was dubbed "improved" over the process used for previous films, because it supposedly reduced grain levels and bolstered clarity and color intensity. The grain here does look muted, but the image maintains a lovely film-like feel. Costume textures and background elements come through well, flesh tones look surprisingly natural, blacks are rich, and the bright whites never bloom. Close-ups are wonderfully crisp, highlighting not only Wray's breathtaking beauty, but also facial scars, wrinkles, and the leathery appearance of the synthetic skin that swaths the killer. Several missing frames cause some jump cuts, but considering we're immensely fortunate to be able to see a color print of this film at all, a few brief visual hiccups are easy to forgive. The source material is remarkably clean, with only a few errant specks dotting the print.

Unlike Mystery of the Wax Museum, Doctor X was also shot simultaneously in black-and-white, and that more widely exhibited version - which was originally intended only for small U.S. markets and international distribution - is also included on this Blu-ray disc. According to the packaging, the black-and-white version has been unavailable for 30 years, so to see it here in such magnificent shape is a treat. Some of the camera angles and set-ups are slightly different, but generally both versions look the same. Once again, the image flaunts a beautiful film-like feel, but appears more lustrous than most black-and-white movies from the same vintage. The remarkably clean monochromatic picture lends the story a more sinister aura, with deep blacks, vibrant whites, finely varied grays, and well-defined shadow lines combining to produce an image that's equally as striking - in its own way - as its color counterpart. Below are a few screenshots that document the differences between the two versions, as well as comparative video clips of the openings of both versions. 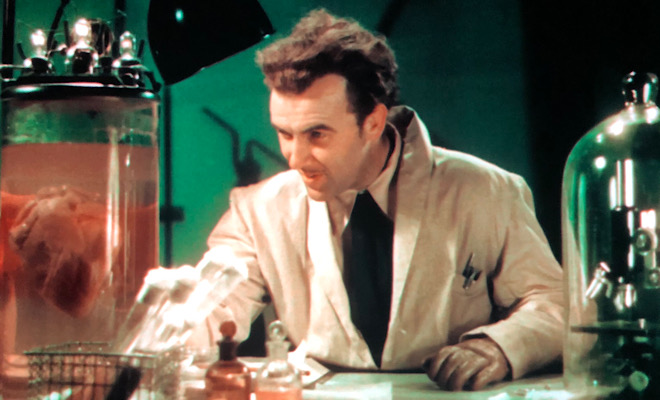 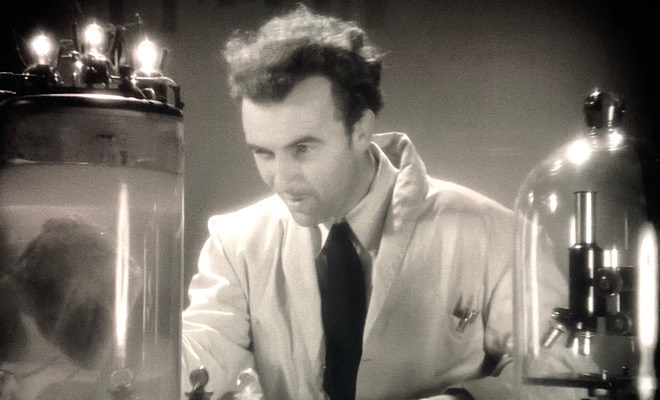 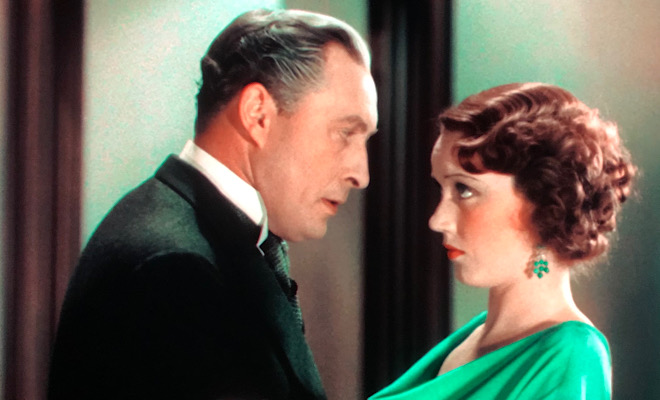 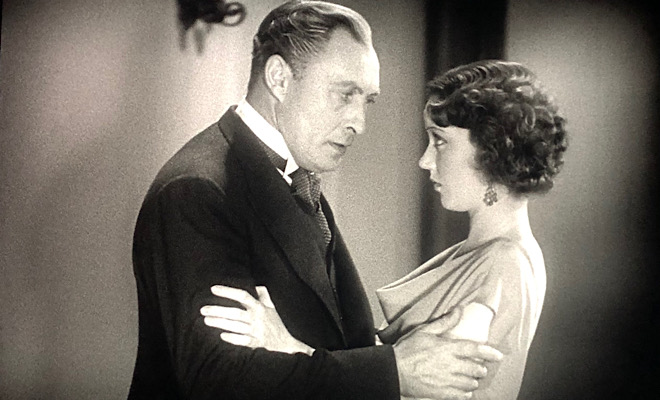 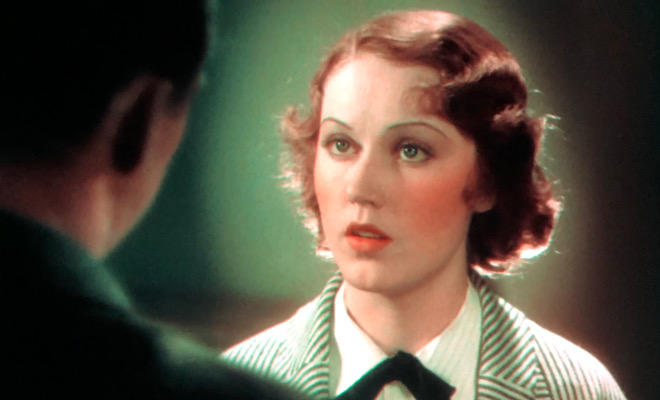 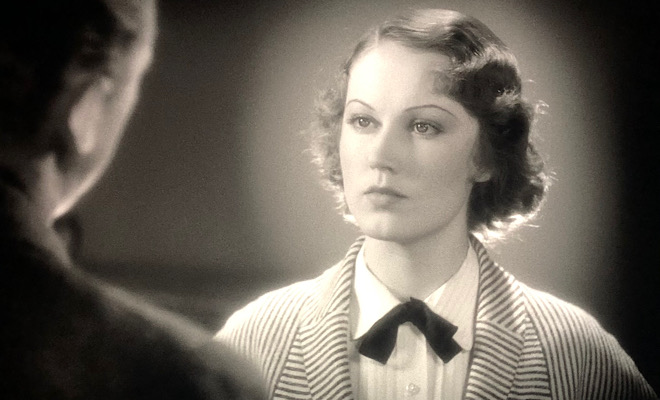 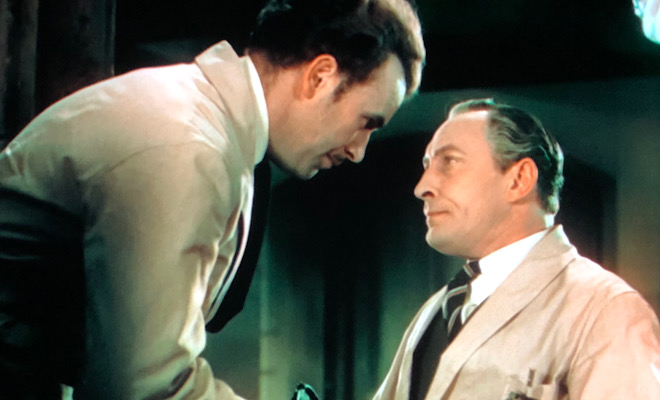 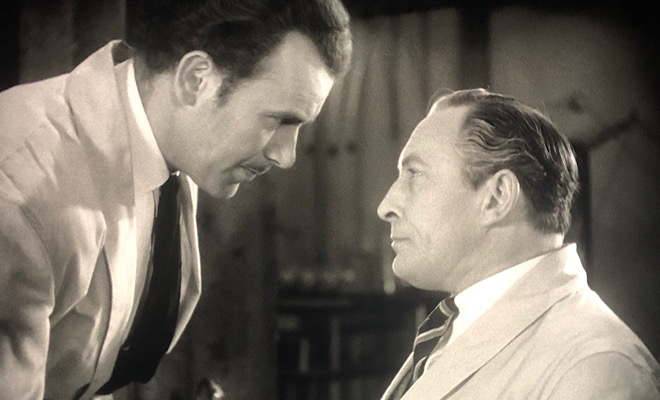 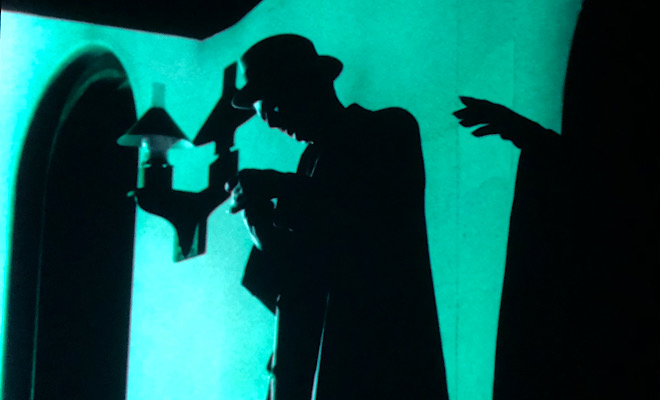 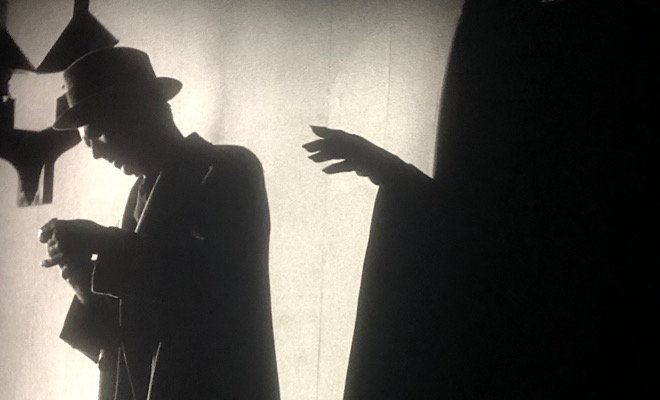 The DTS-HD Master Audio 2.0 mono track for both the color and black-and-white versions supplies clear, well-modulated sound...quite an achievement considering the shabby shape Doctor X was in prior to its restoration. Films of this vintage usually sound tinny and harsh due to the era's primitive recording equipment, but this track only occasionally exhibits those deficiencies. A bit of mild surface noise crops up here and there, but any pops and crackle have been erased. Such horror movie sonic staples as bubbling liquids in laboratory Bunsen burners, creaking doors, squeaky car brakes, buzzing electrical voltage, and the clattering noises of fantastical contraptions are all crisply rendered, while the moaning tugboat horns and train whistles early in the film supply some potent bass. All the dialogue is well prioritized and easy to comprehend, and a wide dynamic scale handles all the highs and lows of the melodramatic music score, which nicely fills the room.

Some recycled and brand new extras combine to create a substantive supplemental package that beautifully complements this classic horror film. It's great to see a fresh featurette on a Warner Archive disc; hopefully the studio will continue to include them in the future.

Doctor X combines creepy horror with goofy humor and the result is a stylish pre-Code thriller that's made more intriguing by the use of two-color Technicolor. Once again, Warner Archive revives a rare treasure, fashioning a stunning transfer from a new HD master "sourced from the last-known surviving nitrate Technicolor print." Nicely restored audio, some new extras, and the black-and-white version of Doctor X, which hasn't been available for 30 years (and looks equally fantastic), also distinguish this noteworthy Blu-ray release that demands a spot in every classic horror fan's collection. Highly Recommended.